Riverdale S02E10 Review: The Blackboard Jungle – Not much happened, but you still got whiplash!

And we back! After a midseason break, Riverdale returns this week with the episode we’ve all been waiting for after the Black Hood reveal (or should we say, “reveal”?). This week, we finally get to meet the long-lost Cooper. 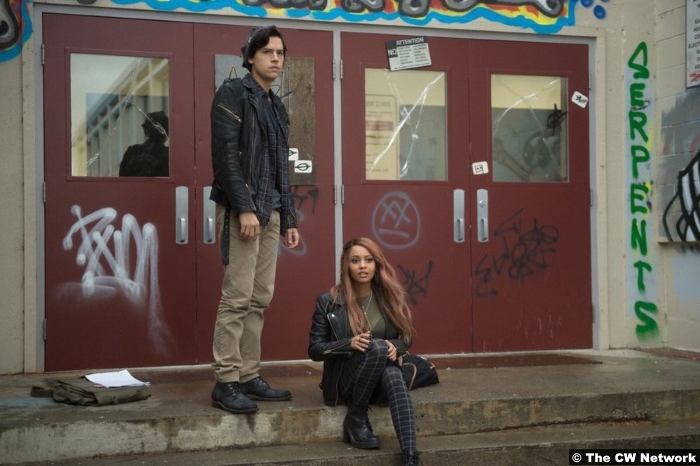 But before that, Riverdale High is rocked by the news you’ve surely already seen in the previews. Southside High is being closed down and its students are being scattered to other schools in the districts. Like Riverdale. Ostensibly, Southside is being shuttered because of toxicity, but really it’s being closed so the Lodges can make a land grab. That seems like them.

Predictably, not everyone is thrilled about this turn of events. Jughead, Toni, Fangs, and Sweet Pea are on their way to Riverdale and they’re okay with it, although Jug is a little apprehensive about being around Betty. The not thrilled side is entirely at Riverdale, where Cheryl and Reggie basically form a citizens’ council devoted to opposing the Serpents at every turn. Speaking of serpents, one turns up spray-painted over the school seal in the hallway and it could not be more obvious that the Riverdale elite did it.

No matter who’s responsible, it results in Weatherbee issuing new dress code edicts banning gang paraphernalia, which he should have done already, but whatever. Most of the Serpents are fine with that–they like going to a school with working toilets, for one thing–but Jughead is feeling himself on a nuclear level since the run-in with Penny and refuses. This leads to a fight, which leads to an ultimatum from Weatherbee to take off the damn jacket. Again, Jughead refuses, so he’s suspended. Great plan, Jug. 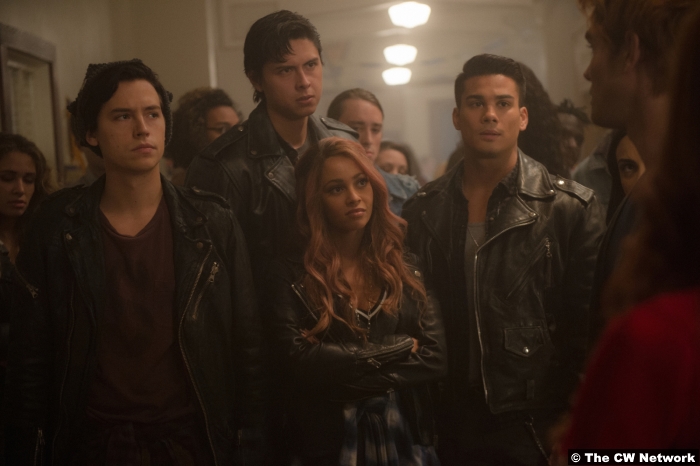 Luckily, he has FP to talk sense into him, which involves his calling Jug “boy,” which is always good. So Jug goes back to school, where the Serpents are now being browbeaten into wearing uniforms, which honestly, is a bridge too far. No one else has to wear polo shirts. Anyway, Jug ends up forming the Swords and Serpents Club, which is pretending to be a roleplaying game group, but is really so they can be Serpents in public. But privately.

Now let’s take a sojourn from that plot to the night’s most insane plot, the FBI agent trying to pump Archie for info on the Lodges. To explain this plotline thoroughly would really just end up in my scoffing and rolling my eyes for seconds on end, so we’ll get to the kernel. The agent brings up the whole Nick St. Clair thing, specifically the mysterious accident he had after his villainy in Riverdale. That leads to Archie visiting Nick, supposedly to pick up another check for Cheryl (since the first was burned), but really to find out if the Lodges were the cause of Nick’s sudden misfortune.

Having both legs shattered has not damaged Nick’s spirit, so he’s as big an asshole as he always is. He can’t resist needling Archie about “Ronnie,” so Archie beats the brakes off him. You’d think Nick would learn after the first whuppin’ to keep his dirty mouth shut, but I guess he’s going to keep getting it cleaned out until he does.

In the runner-up for the night’s most insane plot is Penelope Blossom. I thought she was just de-stressing when she banged the Christmas tree salesman in the last episode, but it turns out that she didn’t do it for free. Instead, in her time of financial need, she’s turned to the world’s oldest profession. And she likes it, much to her daughter’s horror.

Family disappointment is kind of a theme this week, as we find out that Polly had the babies at the Farm, the certainly not-a-cult group with whom she’s been living. She named them Dagwood and Juniper, and Betty’s reaction to that will sustain me for days.

As Polly had her babies with no involvement from the Coopers, an event that Betty knows will (and does) devastate Alice, Betty decides to make her mom feel better by tracking down the son she gave up as a teenager. Hal is completely against the idea, but Alice accompanies Betty to the “Last Resort Hostel,” which–why would you stay at a place with that name?! Despite the name, it’s actually not that bad. Chic’s room isn’t the greatest, but that hallway is pretty decent. Anyway, back to the show. 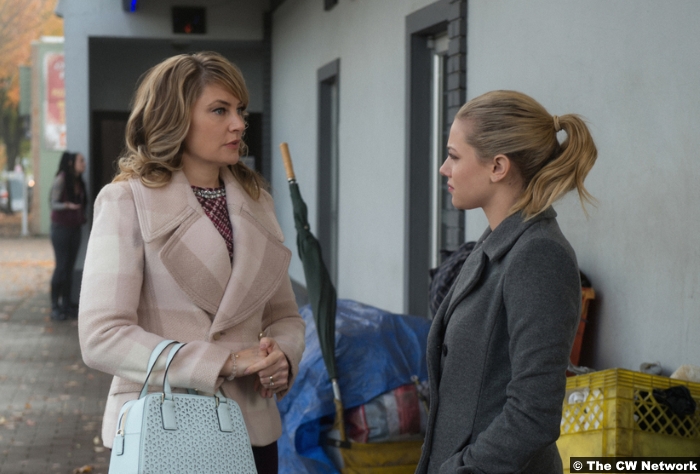 Meeting Charles, or Chic (Hart Denton) as he’s calling himself now, is awkward. He’s resentful that Alice gave him up and Betty got to grow up in a nice home. (Chic was never adopted–instead, he aged out of the foster system.) So it’s a short meeting–he has a “client” [read: john] to meet–and one that leaves Alice in tears.

My favorite little determined face goes back to see him later, though, and finds Chic being roughed up by Random Hallway Goon. Betty applies pepper spray directly to the goon’s forehead and hustles her brother out of there and to the Coopers’ home. There, he’s patched up by his parents and tucked into bed by his mom. Home is the place where, when you have to go there, they have to take you in.

And while he slips out of bed to loom over Betty’s sleeping form, Archie talks with the FBI agent [*5 second long sigh*] about the Black Hood. Specifically about whether the agent thinks they got the right man. Archie isn’t convinced, which is the smartest he’s been in this episode, if not ever.

8/10 – While I’m glad to have the show back, a lot of it felt oddly paced. Maybe it’s because the show wanted me to care about things–the whole school plotline, for example–that I don’t care as much about as say, Chic. Or that Polly has definitely joined a cult. Sometimes so much happens in an episode, but it’s paced so smoothly that the end result is exhilarating. This episode was the opposite. Not much happened, but you still got whiplash as they careened through each storyline. Hopefully, this was just the effect of coming back after a break. Anyway, Polly is in a cult.