Riverdale S01E13 Review: The Sweet Hereafter – We need to talk about Cheryl.

While this is the season finale, so everything from this season is getting neatly wrapped up and the show is laying the tracks for next season, Cheryl is lost in the mix for the bulk of the episode. Unfortunately for her, she’s throwing up more red flags than a gathering in Beijing. The most alarming scene to me is when she apologizes for hitting Jughead last week and then gives him her “iconic spider brooch.” Giving away possessions is an early warning sign for suicide. In light of the fact that her father just committed suicide and her brother was murdered and her mother has the warmth of a sleep-deprived wolverine, the air horns should be going off. So when Veronica receives a text from her saying that she’s gone to be with Jason, it is unfortunately unsurprising. The fortunate part is that the gang gets to her (literally on thin ice on the frozen Sweetwater) before she’s completely gone. Someone give this poor girl a hug. 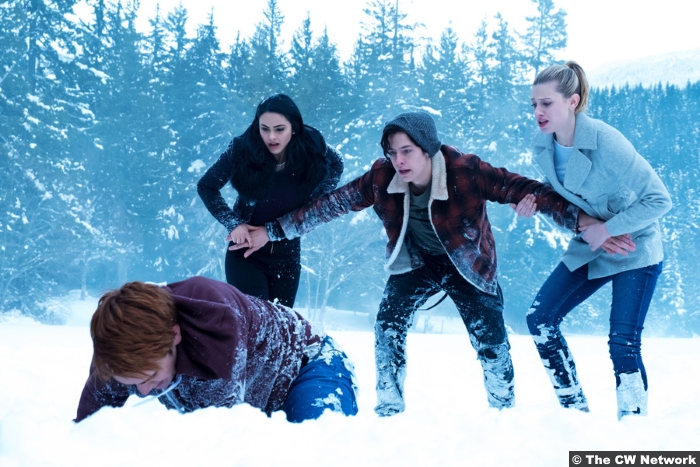 Of course, this being Riverdale, she’s not the only one with problems. Because of his dad’s legal issues, Jughead’s precarious living situation has come to light. He must now go to live with a foster family and he will have to transfer to Southside High, a school so drained of color that it belongs in a DC/Warner Brothers movie. He doesn’t seem too down about it, though. He dismisses Batman versus Superman High to FP as just another high school and really, it is. He’s across this town of mutable size, not across a continent.

But back to Cheryl. Didn’t I say to give this girl a hug? Yep. Left to her own devices and her own demons in Thornhill, Cheryl, who is now obsessed with starting clean, takes the opportunity to saturate the house with gasoline. She waits until Penelope returns to torch it, though.

Penelope was at the Riverdale Jubilee/weekly reason for the cast to gather. That important annual event [CITATION NEEDED] was so boring, I almost torched a building myself. It’s built up as this very prestigious event and Archie and Betty are thanked for their contributions to the Jason Blossom case by being invited to participate. Archie is given a spot to perform with the Pussycats, but only to do mayor-approved songs. They play it like his tribute to Jughead or whatever is so controversial but we all know that it’s because his songs suuuuuuuck. Betty, our intrepid reporter, is given the speech. Predictably, Betty, whose boyfriend was not invited to this celebration, goes off-script, name-dropping Clifford Blossom among others as examples of what Riverdale is about.

Betty is obviously a bit ticked and not just because Jughead wasn’t included in the rah rah We Are Riverdale shenanigans. I imagine having a tiny effigy of yourself hung on your locker next to the charming message, “Go to Hell, Serpent Slut” does not do wonders for your mood. I don’t spend too much time imagining, though, because I’m more concerned about the logistics. Whoever did this did a kind of decoupage on her locker and the surrounding ones with copies of The Blue and Gold. Then they wrote the message in pigs’ blood. Honestly, who has the time for this? And speaking of time, this took some, so how did no one notice this happening? 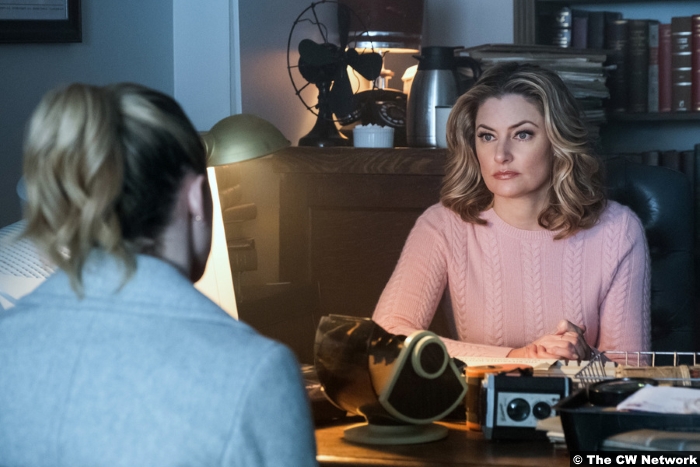 This is a very stressful episode for Betty. Not only is there this and the whole thing with Jughead having to move to the Southside, but she finds out what FP was talking about at Homecoming when he mentioned seeing Alice and Hal in a heated argument when they were teens. It turns out that it has everything to do with the argument Alice and Hal had a few weeks ago, when she alluded to his trying to force a decision on Polly like he did with Alice. If you can’t read between those (pink parallel) lines, Alice got pregnant when they were in their teens. Like Polly, she was shuffled off to the Our Lady of Teen Moms home, where she stayed until she gave birth to a son. So Betty and Polly have a brother out there somewhere—mid-20s, blond probably—and you just know that he’s going to show up at some point.

But that and a certain teenage witch will have to wait until next season. This season, we’ve got our gang splitting into couples. Veronica and Archie spend the night together and Betty and Jughead try to do the same, but are interrupted by a knock at the door. They assume it’s buzzkill Alice, but instead it’s nigh on every Serpent in the county, there to tell Jughead that they have his back while FP’s in jail keeping his gob shut about their possible involvement with ol’ Clifford’s heroin smuggling. They give Juggy a pretty Serpent jacket of his own, which he dons with enthusiasm much to Betty’s dismay.

The next morning, Archie has to rush out on Veronica because Fred wants him to meet at Pop’s. Archie immediately goes to wash his hands, sticking his bandaged paw—he punched through the ice to save Cheryl—all up in the suds. This poor sweet, dumb boy.

When he exits the restroom, he finds a scene where Pop is being held at gunpoint by a masked goon. On the other side of the restaurant, Fred is shaking his head, willing his big dumb galoot of a son not to get involved. No one knows you like your parents, though, so Fred starts making his way toward his son before he can do something dumber than usual. Unfortunately, that attracts the attention of the gun-toting thug, who points his weapon at Fred. Archie makes a heroic leap in front of his dad as the gun goes off and misses Archie entirely. It would be hilarious if, you know, Fred wasn’t lying on the floor with a hole in his gut. Give me two shots of maple syrup, straight up. [Below: Save this man.] 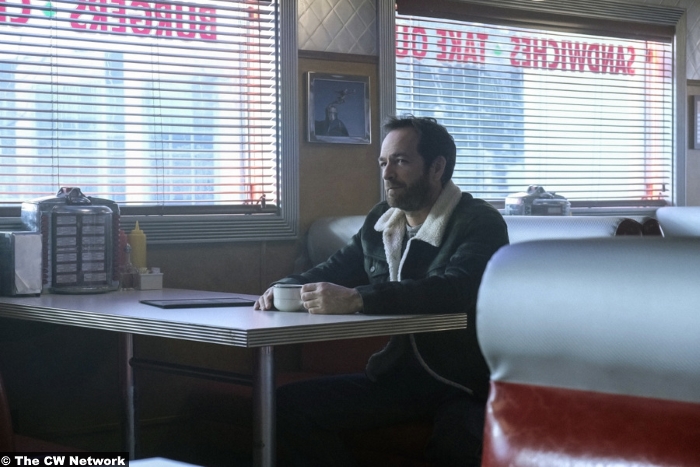 8.5/10 – Cheryl’s unsurprising issues were handled with the hammiest of hands—way to leave her home alone right after her SUICIDE ATTEMPT—but  overall, this was a good wrap-up to the season. Nobody’s too comfortable and we didn’t get that sitcom-y “everyone’s problems are solved now” [see again: Cheryl] ending, but the season still feels resolved.