The Midnight Club S1 Review – A series of unfortunate events 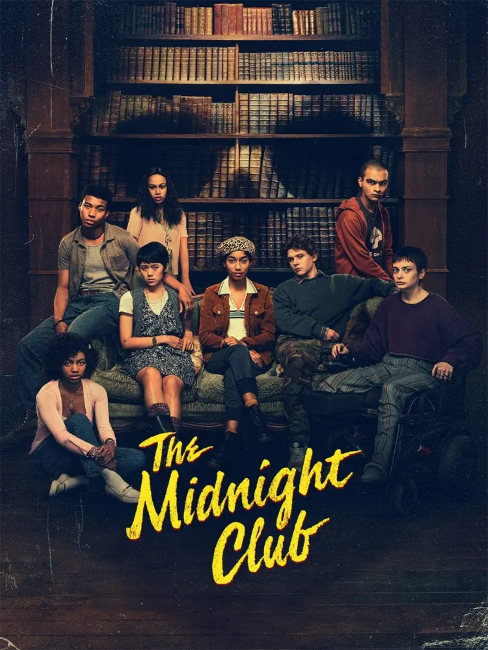 It’s not untrue, after all. If you’re familiar with Flanagan’s past work, like Midnight Mass or The Haunting of Bly Manor, then you’re already well aware. As I alluded to in that Bly Manor review, his work often combines “crying and being scared.” I mean, I’m an officially licensed marshmallow, but outside of that one His Dark Materials scene, it’s been a long time since I’ve sobbed as hard at a TV episode as I did during The Haunting of Hill House‘s finale.

There was then almost a relief for me when Flanagan revealed that his plans to adapt Stephen King’s Revival fell through. Don’t get me wrong. I like both Flanagan and King. However, while I appreciated the story, Revival has maybe the bleakest ending I’ve ever read. Without spoiling it (too much), I’ll just say that it’s about death and it’s hopeless. So, not a beach read. 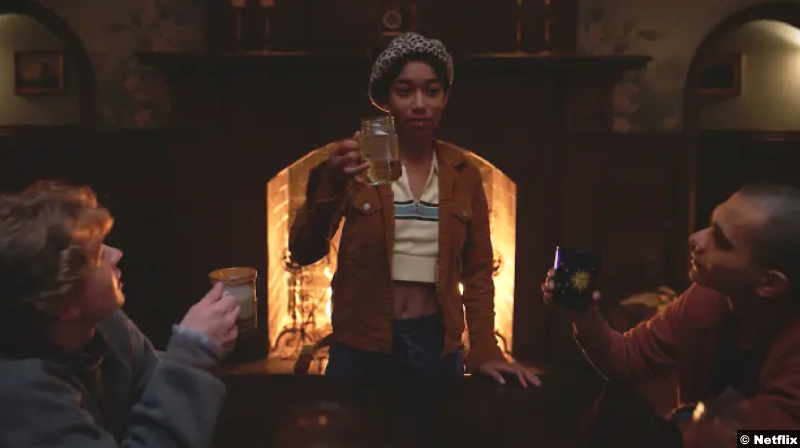 Flanagan’s Midnight Mass, on the other hand, ended with at least some hope. (Again, no spoilers.) But that’s the beauty of a Flanagan work, even in his adaptations. They can be incredibly sad, but there’s usually a hopefulness, a light. (This is not a blanket statement, though. I haven’t seen everything he’s done. But I have seen a lot.)

If you are, in fact, familiar with his past work, then you’ll probably expect a similar result from Midnight Club, which Flanagan created with Leah Fong. [Note: The story has no relation to Mass, except for some actors in common.] After all, Midnight Club comes with baked-in tragedy. An adaptation of the Christopher Pike book, the story takes place largely in Brightcliffe, a hospice for terminally ill teenagers. 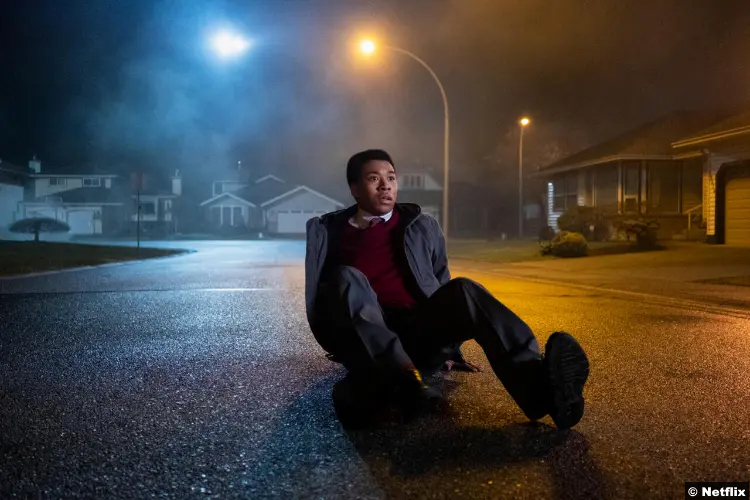 And the premise is quite simple. The hospice is actually a repurposed old home. Every night at the titular time, the small group of teens meets in the library. One, but usually more, of them tells the others a story. The stories range in topic and style, but there’s often something spooky or unsettling about them.

That in itself would be enough to power a show. The club meetings, after all, serve as a framing device that turns the show into a kind of anthology series. In other words, if it were just the kids meeting, and our getting a different scary story each episode, I would be just fine. But there’s more to it than that. 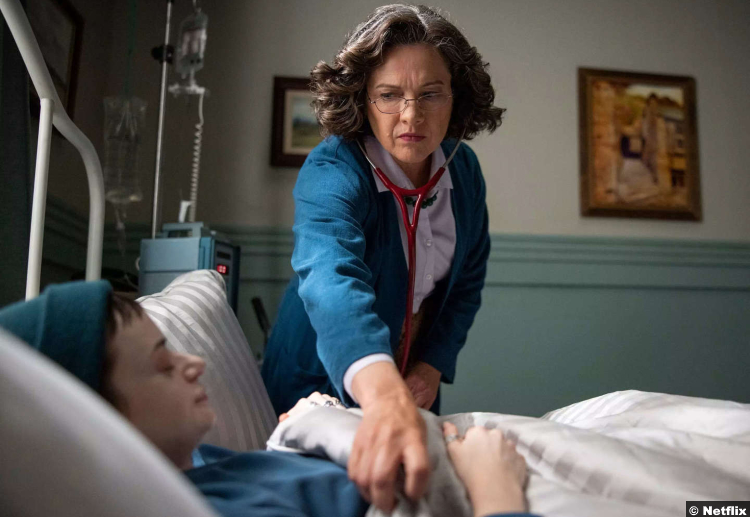 Ilonka (Iman Benson), our gateway into the show, who moves to the house after her thyroid cancer digs in its teeth. Her roommate is the prickly Anya (Ruth Codd), who clings to her harsh exterior to protect herself from more loss. That’s a tough task in a house where everyone’s dying, obviously. The other kids include Kevin (Igby Rigney), Sandra (Annarah Cymone), Cheri (Adia), Spencer (William Chris Sumpter), Amesh (Sauriyan Sapkota), and Natsuki (Aya Furukawa).

Meanwhile, running the joint is Dr. Stanton (Heather Langenkamp) with an assist from nurse Mark (Zach Gilford). Stanton likes to come off as a little strict, but overall, she provides a kind and supportive environment. She and Mark don’t necessarily sponsor the midnight meetings, but they don’t do anything to prevent them, either. 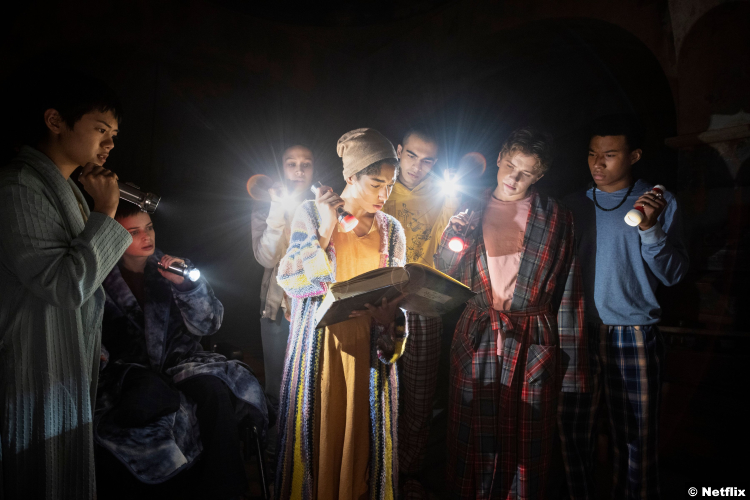 However, once Ilonka focuses on the path of a former resident, things change. That former patient, Julia Jayne, went missing during her stay at Brightcliffe. Once she returned from wherever she was, the doctors determined that her illness hadn’t come back with her. And Ilonka doesn’t just stumble upon this tale at the hospice. It is, in fact, the whole reason she chose to come there. Incidentally, Julia also had thyroid cancer.

What follows after the reveal of Julia’s miracle cure is more complicated than the premise would indicate. There are multiple secret societies, hidden rooms, blood sacrifice, and…magic, maybe? And because this is a Flanagan property, there are also ghosts. Unfortunately, these added ingredients–not present in the source material–didn’t work for me as well as they could have. 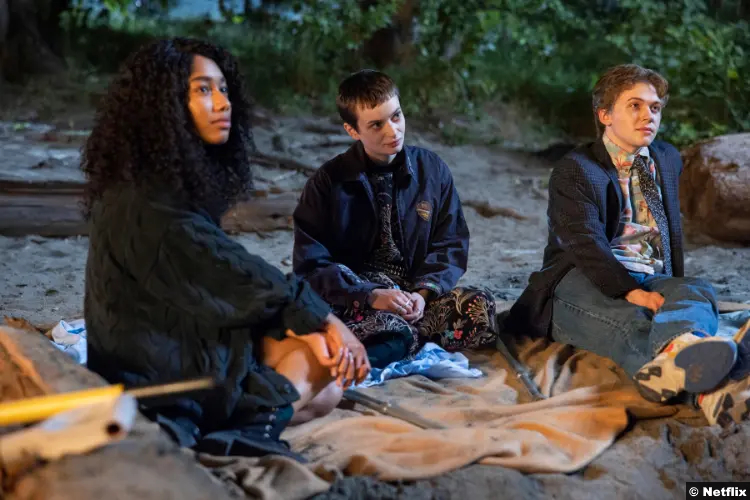 For one thing, the show leaves most of these threads dangling for another season. That makes the ending feel a little unsatisfying. Overall, though, it makes the show feel cluttered and confusing at times. As I said, I wouldn’t have minded if it had just been an anthology series. It wants to be something else, though, and ultimately, it just doesn’t get there.

7/10 – I don’t want to give the impression that this is a bad show. While this is probably my least favorite of the Mike Flanagan’s joints I’ve seen, it’s still interesting. However, if you’re not a hashtag Flanagan fan, then you might find the show a little slow. It’s also not very scary. On that note, the anthology part means that the stories the kids tell, which are adaptations of other Christopher Pike books, vary in quality. I liked this, though, because it felt realistic. A bunch of teens sitting around telling each other campfire tales isn’t going to hit the jackpot every time, after all. But these kids hit it enough times to make it fun. You know, when it’s not emotionally devastating.