Metroid Dread has been out for a couple of weeks and while I was glowing in my initial review, I can now say, after nearly completing the game, that there are a lot of areas for a potential sequel to expand on, improve upon, and tweak to create an even better experience. Much as it was with Breath of the Wild, the high score in the initial review doesn’t mean the game is literally “perfect,” but rather that its flaws didn’t detract from the experience. 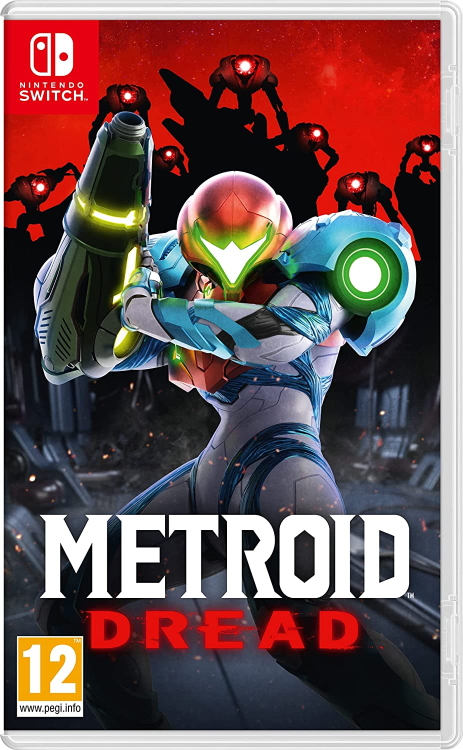 So what kind of things could the next Metroid Dread do to make an even better game? Here are four areas of improvement I had in mind… 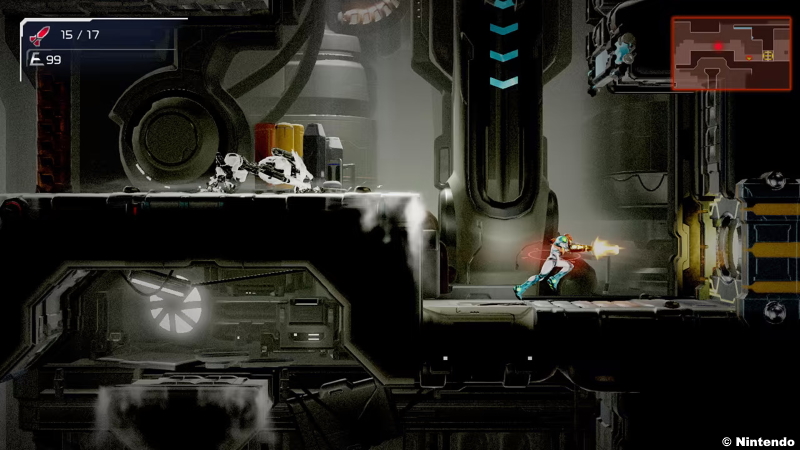 Without question, the biggest disappointment in Dread is in the soundtrack department. While the game is a masterpiece of sound design it lacks the kind of music that makes each area memorable, something which the series’ gold standard, Super Metroid, had in spades. There are hints of some rousing pieces sprinkled throughout the game, but most of the time the score takes a back seat to the mechanical sounds of doors opening and closing, the creepy sounds of monsters skulking about, or the adrenaline pumping bleeps and bloops of a stalking EMMI robot on the prowl.

Perhaps it was the EMMI feature that motivated such a stripped-down score; you really need to hear that particular (minimalist) musical accompaniment to each EMMI Zone for maximum terrifying effect, but that doesn’t mean the non-EMMI Zones couldn’t have something as epic as Super Metroid’s “Brinstar Vegetation” theme or Norfair theme. In one critical cutscene, the Samus Aran theme kicks in and it only serves to remind the player just much music like that is missing in the main game experience. 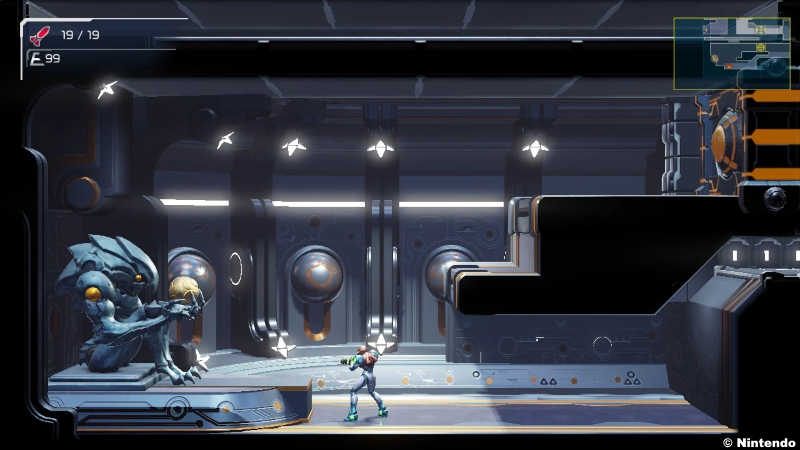 Easily the biggest frustration with the original NES Metroid game was how “samey” the rooms were. Many vertical hallways were copied/pasted in multiple areas, confusing the player who already had to explore Zebes without a map. The sequel on the GameBoy improved things a bit but it was still difficult to keep everything straight on that tiny green-tinted screen. When the series moved to sixteen bits, the team at R&D1 made sure players knew where they were at all times, even without consulting the rudimentary map in the corner of the screen. Nearly room in the SNES classic had some unique features, notable landscape, odd design, or memorable enemy type to stick in the player’s mind when the need for backtracking kicks in.

In Metroid Dread, however, the rooms are so smoothly integrated into the overall environment that there’s very little distinctiveness. Maybe that’s a by-product of the HD production; everything is shiny and slick and lacks the “painter’s touch” of the hand-drawn sprite quality of the SNES and Gameboy Advance Metroid games, the game maybe looks too good for much personality to come through in every little room. That’s a joke, though I do wonder if the move to widescreen and the more zoomed-out camera, compared to the older games, contributes to this, as there’s less of an incentive to create those memorable one-screen rooms that Super Metroid had peppered around its world. Adding a few more of those in the next game would go a long way to making each section of the world more unique and memorable. 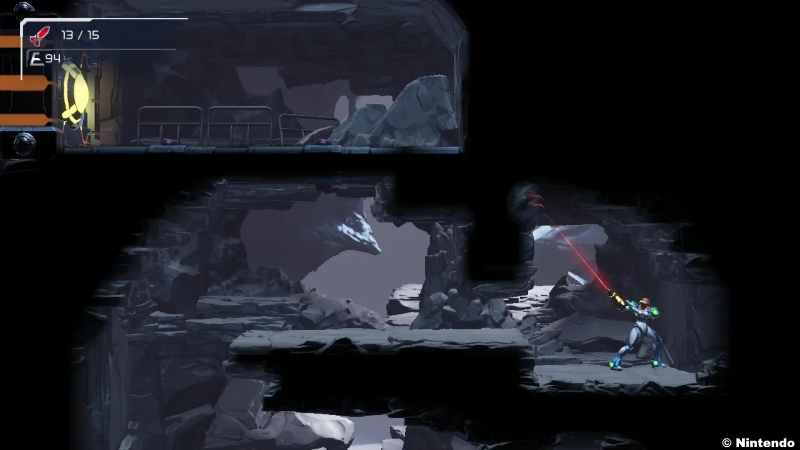 If you’ve been playing this game for a week and if you’re an old school Metroid gamer like me, you’re probably doing a lot of charge beam attacks and keeping your missiles in reserve for boss battles. You can stop now. Missiles are grossly overpowered in this game and, what’s more, missile drops are handed out like candy. I’m about 2/3 of the way through the main campaign and I have enough missiles now that I just spam them in all but the weakest of enemy encounters. You can blow fifty missiles in a minute and, after wasting only twenty or thirty enemies (which might sound like a lot but is not at all) you can be completely restocked. What’s more, there are multiple weapon recharge stations in every world, so just your regular exploring of the map will ensure you are never low on ammo. It’s hard to feel the danger in the non-EMMI Zone areas when I know I can just blast away at everything that moves and take down 99% of the common foe in just a few shots.

Part of the challenge to the previous Metroid games (even the Prime series) was the danger of running low on ammo when you needed it most. Here, the locked doors only require a single missile (unless it’s one of the rarer five-lock doors), super missiles and ice missiles are stacked and not separated, and even bosses are courteous to give missile drops in the middle of a fight. You’ll never run out and they only get more powerful as you progress. On the one hand, these are reasonable quality of life improvements (the need to sit and grind on enemies as they come out of a tube is basically gone in this game), but the balance seems to have shifted too far in the other direction. While I will happily admit I have died more times playing Metroid Dread than any other game in the series (even when you remove the hilariously high number of times the EMMI has gotten me), I think there could be a better balance between the amount of damage the enemies inflict on Samus and the ease with which the game reloads your extremely powerful weaponry. 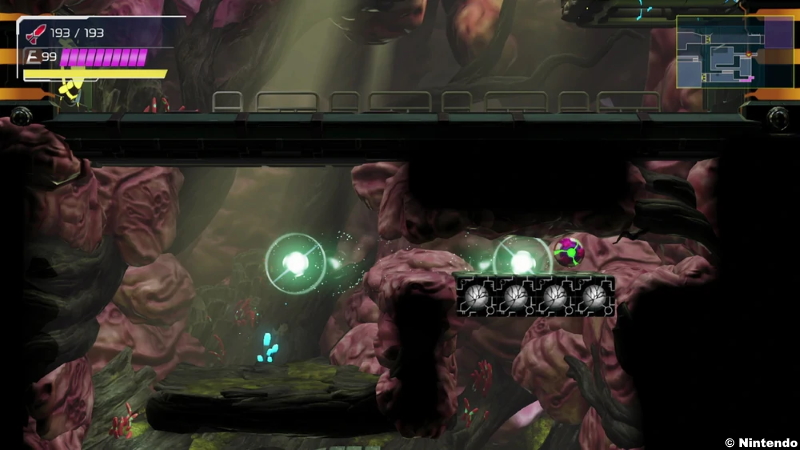 The average time it takes to (traditionally) beat Super Metroid—the last 2D game in the series that was released on a home console—is between 12-20 hours, depending on your skill level. That’s not a 100% run, but it’s also not a “speedrun.” Metroid Dread, on the other hand, will be completed between 8-12 hours, again depending on your skill level. It’s an extremely smooth experience, the way the map unfolds and leads you from one area to another, back to a previous area, then to a different new area, and so on. It feels much more interconnected than Super Metroid, despite the longer loadtimes between areas, and that smooth progression only contributes to longer play sessions.

I usually go back through Super Metroid once a year or so, playing it on a mostly traditional (no sequence-breaking) path, and I typically complete the game in 8-10 relaxed sittings. Metroid Dread, on just my first playthrough, is on pace to be finished in the same amount of time. Mind you, back in the 90s I would play Super Metroid in something like 20-30 sittings. I’ve cut that number down simply by being so familiar with the game I can sleepwalk through it. I shouldn’t be breezing through this game, despite how often I die, in as brisk a pace as this. I’m sure a lot of work went into designing the world and interconnecting it all, making it so that the player can sequence break without getting stuck, etc, but I’ll go ahead and be a spoiled gamer and say, if the game is going to be this effortless to move through, then it should probably be 50% longer than it is.

There, I said it.

Spoiled or not, while I absolutely love the game, even more than I thought I would (and I had high expectations), those are four areas where I would hope to see the team behind the next 2D Metroid game put their focus. If they do, they might produce a game that bests even the GOAT, Super Metroid.