REVIEW: GDT’s Pinocchio is my favorite film of the year!

I didn’t do a yearly review of all my favorite films from 2022. Had I, there are a few films that would have risen to the top of the pile. The Batman is one. Top Gun Maverick is another. Barbarian would also make the cut, as would Wakanda Forever. Rounding out the top five and, I think, topping the list, would be Pinocchio…and I don’t mean the version that released on Disney+ a few months back.

2022 saw the release of two different films based on the 19th-century tale of the wooden puppet that became a real boy. I cannot but compare the two.

The former was produced by Walt Disney and was designed to be a “remake” of their classic 1940 animated masterpiece. The film leaned into the advantages of the Disney brand, featuring a Gepetto that looked very much like the character as drawn by the Nine Old Men eighty years ago, as well as a title character that, well…just see for yourself: 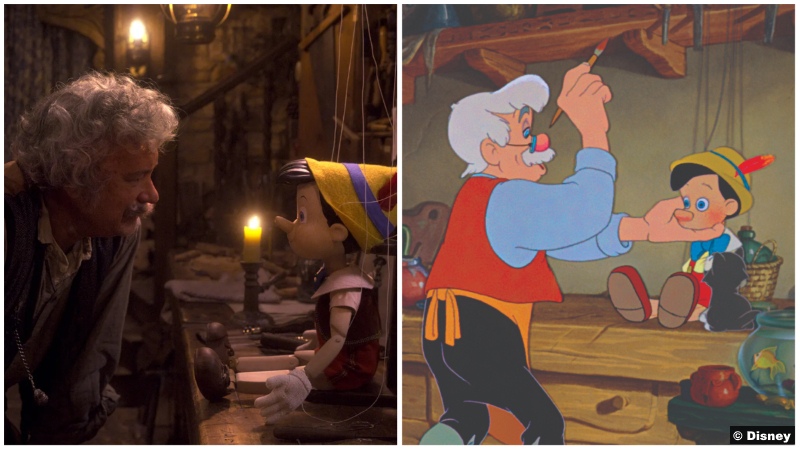 The trouble with the Disney+ version is two-fold. First, it changed up the story in numerous small ways and in all the worst ways it could. Instead of making changes in order to craft an entirely new take on the story, it retained the basic plot and beats of the 1940 animated version. The changes, therefore, felt like differences that asked you to compare them to the original and every time the differences were lesser than what had come before. The other major problem is how soulless and empty it felt. The movie looked like a parody, like an extended funny-or-die sketch without the humor. Disney was too slavish to the look of their 1940 film, but not committed enough simply to retell that story, with all the grittiness that goes with it.

For that, a new kind of Pinocchio movie needed to be made. 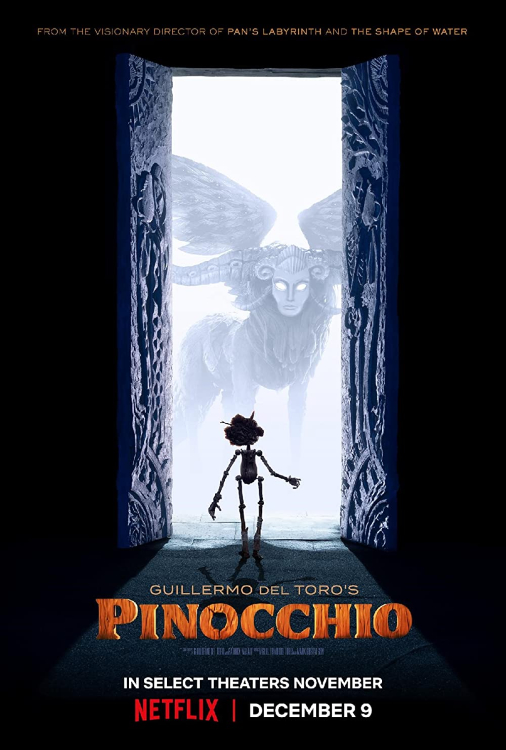 Coming into del Toro’s Pinocchio, I had no preconceptions. I had seen no trailers. I had read no spoilers. To say I was surprised that Pleasure Island was changed to be an Italian Fascist Boot Camp for children under Mussolini’s reign would be an understatement. And yet it works. It doesn’t work on paper, not at all. It’s far too bold and idiosyncratic a choice for a company like Disney to greenlight. A storyteller like Guillermo del Toro, on the other hand, understands how to make a new adaptation. Often, people will say “why do we need another version of _______,” whether it’s Robin Hood, Peter Pan, or Three Musketeers, etc. I’m sure it was said of Pinocchio when these dueling versions were announced. GDTs version showed how a “new adaptation” ought to be handled.

Pleasure Island was changed into a Fascist Boot Camp, not for shock value and not to change things for the sake of it, but because the change made sense within the themes of this story. Instead of disobedient boys being punished by turning into donkeys, this movie features obedient boys being punished by becoming soldiers (whose gasmasks resemble the long faces of a donkey). GDT took the ideas found in the original story and remade them into something new, something that fits the themes being explored in THIS version. It was still Pinocchio, but it wasn’t a soulless remake or a cash-grab.

The result is a movie that cost only thirty-five million dollars to make but which contains more heart, more energy, more emotion, and more reason for being than the Disney remake, which cost the company one-hundred-and-fifty million dollars to produce. That’s a damning comparison, considering how much literal manpower went into this one and its jaw-dropping stop-motion effects. 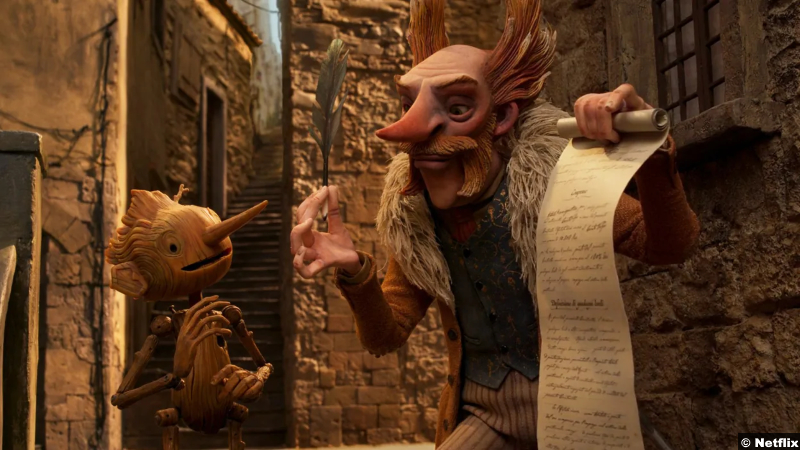 What was the Disney+ version of Pinocchio about? What message was it trying to send? In that version, for example, Pinocchio is enticed by free root beer and any reference to smoking and gambling is removed, as opposed to in the 1940 original. Disney would argue that leaving them out is done to protect children, but the movie does everything BUT feature those things. It’s close to a shot-for-shot remake but for those notable omissions. Why make the movie if you’re not going to make the movie? And if you’re not going to make that movie then go all the way and make a completely different version of the story (which is what GDT did). Besides, how is it protecting kids when you don’t show them that smoking and gambling is bad?

GDT’s version shows Gepetto getting absolutely hammered, amidst a violent thunderstorm, as he cuts down the tree he planted from a pinecone taken from the corpse of his dead son. The first fifteen minutes of this movie go to places Disney would never dream of. That’s fine. Different strokes. But it’s not the fact that GDT was willing to go dark that makes it great; it was the fact that he was willing to go different. Gepetto is not just a carpenter who wants to make a boy. He’s a father who lost his son and, in a moment of drunken weakness, decided to go all Victor Frankenstein and carve a replacement. He awakens with shock, horror, and self-loathing, but quickly comes to accept the humanity in this obviously non-human creation. In this story, Pinocchio is not a bad boy who learns to be good; he’s a naive boy who learns how to be responsible through self-sacrifice (the ultimate expression of goodness).

This movie has something to say. 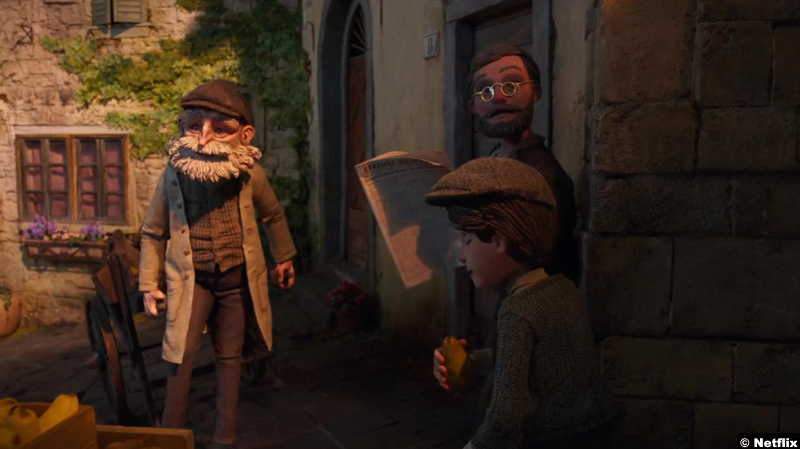 The Disney+ version of Pinocchio is helmed by a director once famous for such masterpieces as Back to the Future, Who Framed Roger Rabbit, and Contact. Netflix’s version is filmed by a director still famous for such masterpieces as Pan’s Labyrinth, Pacific Rim, and The Shape of Water. The former is a movie I hope never to see again. The latter is a film I will revisit with my sons multiple times as they grow. It might be my second favorite GDT film, behind Pan’s Labyrinth. It’s absolutely my favorite version of Pinocchio, and it’s also my favorite film of 2022.

10/10 – GDT’s Pinocchio justifies its existence, but more than that, it’s a stunningly beautiful stop-motion exploration of the father-son dynamic, and of the need for humanity and responsibility amidst the rise of fascism in 1930s Italy. 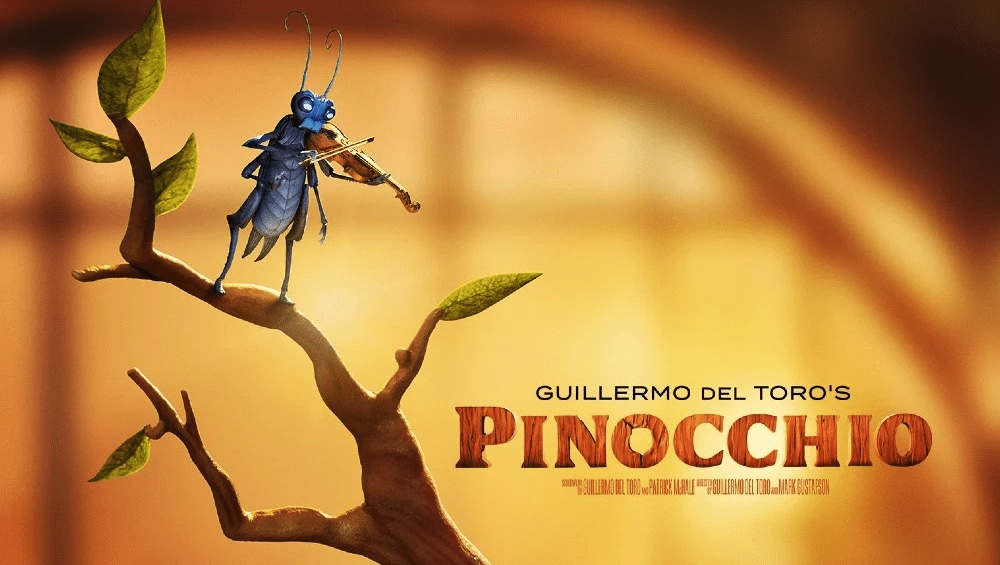