First off, if you’re not down with Zooey Deschanel’s charm, wit and adorable quirkiness you can’t be my friend. She’s great in 500 Days of Summer (in a subversion of the Manic Pixie Dream Girl trope). She’s great in Elf. She’s great in New Girl (which is the only great ensemble comedy left on network TV).

And she’s great as the lead singer of a little duo, indie music group alongside M. Ward called “She & Him.” Their music is a combination of classic Nashville-sounding country, bubblegum pop and retro-sounding, old-timey “standards.” Together they’ve released three albums of mostly-original material (penned by Zooey), an album of oldies/standards, a Christmas album and they have another Christmas album coming out next month (I already have it pre-ordered). 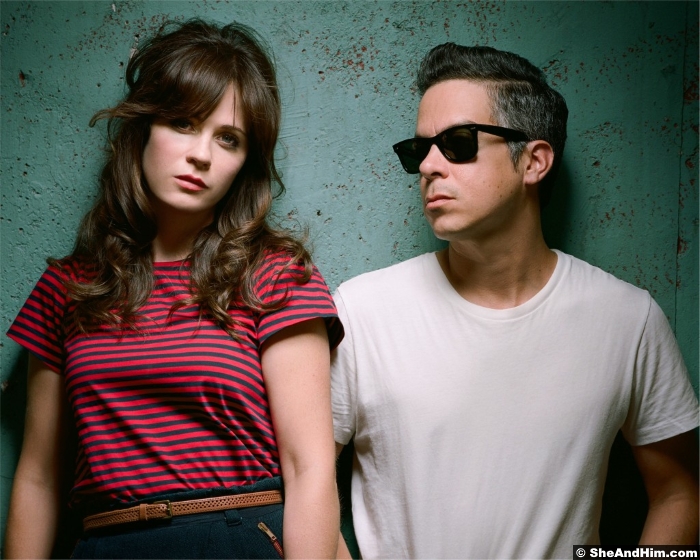 All of their songs have a easy-listening feel to them. They’re perfect for a warm day when you’re driving in your car with the windows down or just as background music when you’re doing nothing around the house. But that doesn’t mean the music is shallow or throwaway. On the contrary, some of Deschanel’s writing is genuinely thought-provoking. The best of the bunch, in my opinion, is the second single from their second album (Volume Two). It’s entitled “Thieves.” At first glance it sounds almost like a jumble of random phrases that flit in and out of Ward’s excellent accompaniment. Look (or rather, listen) deeper, however, and you’ll discover that a tremendous amount of depth and complexity is packed into this four minute ballad. The words aren’t nonsense; they tell a story.

Let’s break the song down, piece by piece…

There’s thieves among us = The song begins by introducing the titular thieves. These aren’t criminals who steal cars or jewels, however; these are people who steal hearts….

Painting the walls = Here, mere seconds into the song, is where most dismiss the song as a jumble of gibberish. On the contrary, this is beautiful poetic expression. These thieves who steal hearts do so by getting into your mind and making themselves at home. What do you do when you move into a new home? You paint the walls. You make it your own. She is describing a person you fall for but can’t have, yet they persist in lingering in your mind.

With all kinds of lies, and lies… = The point of the song is to describe a romance that was doomed before it ever could start. This isn’t a “doomed to fail” relationship. This is doom from before the word go. She is in love with someone else, which implies she already has someone. And she has to lie and lie and “tell” (though not verbally, as we’ll soon see) her current-someone that he’s the only one for her.

I never told it all. = She describes her lies as lies that she has never told. She has told them, but not with words. The person in her life has no idea that her thoughts are being consumed by another. She has no reason to tell him reassuring words, but she overcompensates nonetheless. She acts like a loyal companion, but that life is a lie she’s never “told.”

What’s in my pocket? = Here again, the words seem to be meaningless, but this is just a phrase to set up the final line of the verse, which is dripping with poignancy. She has something in her pocket…so what? What is in her pocket? It doesn’t matter! What’s in there isn’t the point. The point is…

You never knew. = This person she’s infatuated with doesn’t know what’s in her pocket. Maybe she’s carrying her favorite flavor of chewing gum. What’s the flavor? He doesn’t know, as she says…

You didn’t know me well = Her current love knows her. He could tell her what kind of gum she’s carrying. But this other person is clueless. Thus she laments that he didn’t know her well…

So well as I knew you. = The nature of the relationship…one which she wants but can’t have…is one that doesn’t allow the two to get to know each other. She wants that, but she can’t have it. Judging by the phrasing, she first spotted him and the spark ignighted in her heart. She knows him better than he knows her and she wants him to know all about her too. Instead, they must remain distant.

And I know = The refrain begins with a little bit of self-realization. She hasn’t deluded herself into thinking “maybe…someway…” No: She knows this is a go-nowhere infatuation.

And you know too = Here is a new revelation. Up to this point it wasn’t clear if this was a one-way infatuation or if it was mutual. It turns out it is mutual. She and this other person both have feelings for each other, but because of present-relationship circumstances (loyalty to her current companion) they both know “it can never be.”

Is terrible news. = This isn’t a love story that will end with these two people walking into the sunset together; There’s no happy ending to be found here. This is more bitter than it is sweet.

But that wont stop me crying = Can you control your feelings? Hardly. In this case she knows the love can never be, but that doesn’t take away the hurting. If anything it deepens the wound…

No, that wont stop me crying over you = She repeats her last phrase for emphasis, adding the pained “over you” to the line. She’s not shedding tears one day and then moving on; this is persistent pain she’s going through.

I’m not a prophet. = This verse is a written to defend the singer against accusation that she’s a bad person for the feelings she’s suddenly dealing with. On the contrary, when such a forbidden attraction happens, it’s never wanted or expected. She didn’t plan on this or predict it; she’s not a prophet.

Old love is in me = Someone might say “why doesn’t she just end her current relationship and go chasing after this new guy?” Answer: Because she still loves her current companion. She calls him an “old love” but that’s not meant to imply “worn out” or “expired.” It’s just a contrast…

New love just seeps right in… = She has old love. It’s love and it’s still in her, but (unexpectedly) “new” love has entered the equation. Notice how she describes it as “seeping” in. This new love trickled and dripped, like a leaky pipe, into her heart. It wasn’t expected and it wasn’t wanted, but the leak has become a flood.

…And it make me guilty. = Once again this verse is designed to show us the character of the person singing the song. She’s guilty over her feelings. She’s not looking to get out of her relationship; she doesn’t want to get out of it! She’s happy with who she’s with, but suddenly she’s developed feelings for another and that makes her equal parts sad (because she has feelings that can never been fulfilled) and guilty (because of her current love).

Why do you look like that? = There are two ways to interpret the second half of this verse. Either these are her words to this “other” man or it’s his words to her. If it’s her words then this is just her trying to friendzone this guy and have the best of both worlds (her current lover as a lover and this new guy as a friend). I tend to interpret these as his words, however. In that case, she is singing to herself the “terrible news” that she already knows: They can’t be together, but—he says—there’s reason not to cry. There’s reason not to look so sad…

It’s not all that bad. = The optimism of the final four lines of this verse is why I see them as being his words. She’s depressed and sad before and after these words, making these four lines stick out very obviously. If they are his words then it makes sense: She’s sad but he’s saying “it’s not that bad…there’s a silver lining…”

I’ll see you sometime = They can remain acquaintances, around each other “some times.” In time their romantic feelings might dissipate and a true friendship can blossom.

Sometimes lonely isn’t sad. = This is just beautiful poetry, there’s no other way to put it. Without him she’s going to be “lonely.” Yes she’ll still have her current love, but she’ll be without the source of this new feeling. She’ll be lonely, but only in a very specific way. But he reassures her that her loneliness doesn’t have to make her sad. She still has someone that she loves and that loves her.

We two are makers = This truncated verse serves as basically a bridge between the third verse and the close of the song. She describes herself and her forbidden love as a couple of makers. What have they made? In the beginning of the song she describes him as someone who has moved into the home of her heart. What kind of makers are they? Not home-makers; they have no future together. Instead…

Just made this mess. = They are mess-makers. They’ve made a mess of their lives by (unwittingly) falling for each other.

Two broken hearts don’t beat any less. = The love will probably always be there, but it will never be enjoyed. They will go on their lives as broken-hearted people, but they will go on. Their hearts will keep on beating. They will beat and live for their current loves, but the thoughts of the one they could never have will linger forever.

The beginning of the song is repeated here before the chorus repeats and closes out the song. Why return to the opening line, though? Is it just repetition for the sake of it? No. Just like the words are not gibberish as they are thought of on first glace, the re-stating of the opening line is likewise deliberate and important.

The line “there’s thieves among us…” in the beginning of the song sounds like the start of an interesting story. By the end of it, once we’ve had a chance to digest this tale of broken hearts and forbidden love, the line becomes a warning. She’s warning lovers everywhere to be careful of those on whom our eyes and thoughts may linger. It may start innocently, but before you know it, that person may become a thief that steals your heart and turns your life into a tragedy.

Heed the warning of “Thieves.” It’s a beautiful song that is beautifully sung, beautifully written and beautifully produced, but it carries terrible heartache within its poetry.