So it’s all over but the shoutin’ and we end this episode, the mid-season finale, knowing who the Black Hood is. But do we, really?

The revelation that Joseph Svenson, the Riverdale High janitor, has been the Black Hood hits like a gentle breeze. On the one hand, it makes sense, I guess. On the other, it has no weight. We met this guy like, five minutes ago. Sure, we’ve learned his sad backstory, but we don’t know him like we know Betty or Archie.

And when I ask if we really know the Black Hood, I mean that in another way, too. Is Joseph Svenson really the Black Hood? I have my doubts. And from what we see at the end of the episode, so does Betty.

Before we get there, though, Betty has a horrible nightmare in which Polly calls her downstairs to open presents on Christmas morning. When she gets down there, though, her family is slaughtered and the Black Hood, dressed as Santa, Bob-crawls to her. 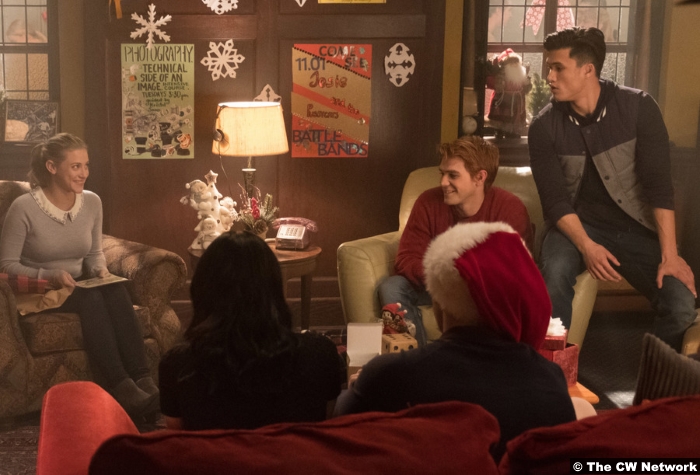 It’s almost as bad as the awkward Secret Santa gathering Kevin holds. Nothing like having to exchange gifts with your recent ex to really make you feel the Christmas spirit.

Archie gives Betty an old read-along copy of Swiss Family Robinson that she used to love. Listen, read-along books were my jam when I was little, so I’m as touched as she is.

But if you’re wondering why Archie is giving garage finds instead of store-brought presents, the Andrews family is a little light on cash this Christmas. As anyone familiar with the American healthcare system knows, it doesn’t come cheap. Fred’s stay in the hospital racked up a bill to the tune of $86,000. The Riverdale writers bless me this Christmas by having Archie respond with “Dollars?!” And my heart grew three sizes. 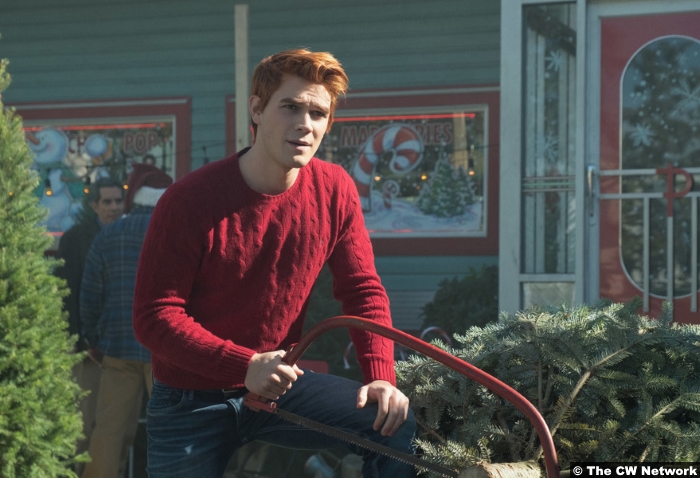 Fred and Archie are selling Christmas trees in Pop’s lot, but that obviously isn’t going to cut it. I don’t know how much real Christmas trees go for–I have a fake one. The National Christmas Tree Association (yes, it’s a thing) says the average is $75, but that seems bonkers for Riverdale. Let’s just say $25, since Boston Christmas Trees offers a range from $15 to $125. They would have to sell 3000 Christmas trees to pay off Fred’s hospital bill. Of course, that doesn’t include money from his regular income and by the way, where is that going? I don’t understand Fred’s expenses. [Below: Me, doing Christmas tree math.]

The Andrews aren’t the only ones worrying about tight budgets, which might be the most realistic part of this episode. The Blossoms are out of money, somehow. I don’t really understand that, either. Don’t they have insurance and a maple empire that wasn’t burned to the ground? Anyway, the most important parts of these Blossom-centric scenes is that Nana Rose survived the fire and that Penelope is…having a visitor. Of the masculine persuasion. I would say something encouraging, but she’s a poisonous harpy who didn’t even blink when her mother-in-law told her this episode that she should have drowned Cheryl and Jason at birth like kittens. So I don’t care if it goes well.

Over at the Pembrooke, Archie has confided in Veronica about Fred’s massive bill, so she suggests that the Lodges pay it. After all, they’re living like “Russian oligarchs,” with their “Glamerge eggs.” [Sidenote: The fake brand names Riverdale uses, like American Excess (and did I hear “Spiffany”?), are fun, but nothing will ever beat the fake social media sites that exists in the Law & Order world. If you disagree, come see me on my FaceUnion page.]

Hiram and Hermione are like, whoa. We’re generous for the tax break, but we’re not actually generous. So since she’s her parent’s child, Veronica opts for the most criminal move, calling the hospital herself and paying off Fred’s bill with her mom’s card. She also find the paperwork for their ownership of Pop’s. Having been tipped off by the credit card company, her parents have returned home to confront her, where she wields the Chock’lit Shoppe deed as a weapon. Somehow this turns into her parents making her a greater part of their business, as long as she doesn’t have to do anything illegal (ha) and they’ll let the payment for Fred stay. We don’t get to hear any details of what exactly they’re up to, but I’m guessing it rhymes with fraud.

Veronica is not the kid in Riverdale testing her parents, though. Jughead is trying to be all up in FP’s business and even a well-bellowed “BOY!” won’t get him off the case. Juggie decides to take matters into his own hands re: Penny. She’s got FP and his helpers (Tall Boy and Sweet Pea) running drugs for her and that’s just not the gang’s way, says the boy who joined last month.

He pep talks the rest of the Serpents into going along with his plan, which entails kidnapping Penny, slicing off her serpent tattoo (damn, Jug), and banishing her to Greendale. Somehow I don’t think she’s just going to go gently into that good night. 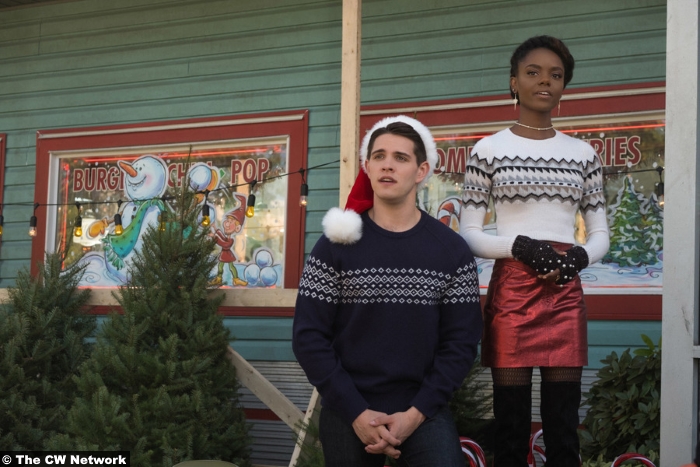 And it was about this time that I realized that she can’t be the Black Hood mastermind, because even she can’t spin this many plates. Having noticed Mr. Svenson’s absence, Betty and Archie go to visit him at home, where there are no signs of life. Then Betty gets his finger in a package. According to Black Hood, Svenson is the primal sinner in Riverdale, whose sin kicked off the cavalcade of sinning he’s so upset about.

Since Svenson has no family, the kids go visit the Sisters of Quiet Mercy, where Betty bullies a nun into giving up the goods. Young Joseph was pretty sure he’d pointed out the wrong man. He was visited by the vigilante group who took out that traveling preacher, a group that included one woman, Nana Rose.

Nana vaguely recalls the whole thing. She does recall that Betty’s grandpa was part of the group, so that’s nice. Using this information, Betty finds a picture of her grandpa and pals with a “tree” they just planted at Pickens Park, and she and Archie go there immediately. There they find a freshly dug grave, which turns out to be empty. This is the part in the horror movie where you run away right now, but Betty’s thinking and Archie’s…oh, sweet Archie.

Anyway, it’s an obvious ruse. Black Hood shows up and forces Archie at gunpoint into the empty grave, then forces Betty to start shoveling dirt. Fortunately for them, Betty’s earlier aside that she’d call Sheriff Keller on the way was a thing she actually did. She uses the distraction of the sirens to whack BH with the shovel. He gets away while she’s helping Archie out of the ground, but they chase him onto (Sweetwater?) Bridge, where he’s shot by Sheriff Keller. That’s where he’s revealed to be Svenson. I mean, if you say so.

8/10 – While I do love a spooky Christmas story, I just can’t accept this tidy ending. It just doesn’t make sense. For one thing, how would Svenson know about Nancy Drew?! If the Black Hood really has been unmasked, then the momentum is all off. It feels too rushed if this really is the end. But I have a feeling it’s not.