Our narrator Jughead is ruminating on home and hope this week, but there’s not so much hope as there is a lot of hard choices. Sometimes those two things aren’t that far apart, though.

If you were wondering where young Jughead is laying his head these days, it turns out that he’s Harry Potter-ing it up in a forgotten closet under the stairs at Riverdale High. He dreams that he’s in the candy-colored world of the original comics, where everything’s exaggerated and everything looks perfect. That might have been what people were expecting when they heard there was going to be an Archie TV series, but how long could they have kept that up? It’s just not the world in which we live anymore. And even the comics have evolved to reflect that. 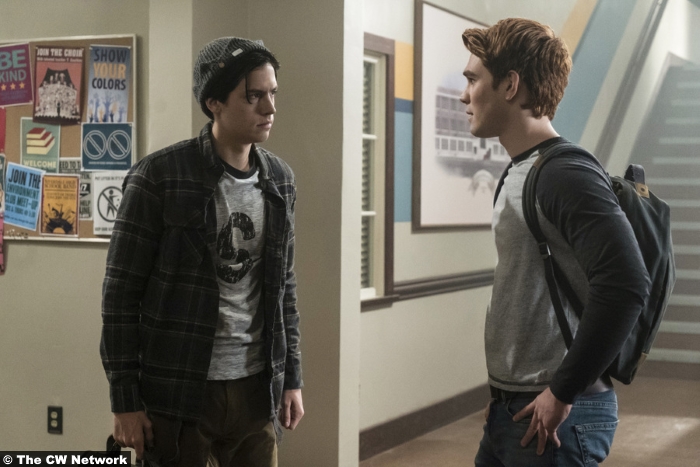 After waking, he showers in the gym, which is where Archie finds him. The stars must be aligning, because he manages to figure out that Juggy is not showering at school for the hell of it. He then invites him to stay at the Andrews house, which Jughead refuses for reasons. So instead, the boys hatch a scheme to get Fred to rehire Jughead’s dad, whom I guess we’re calling FP now.

They pull it off, but Southside Serpent FP doesn’t strike me as the kind of guy who can hold down an honest job anymore. It doesn’t make it any better when he and Hermione are introduced and have to pretend one of them didn’t just send a snake in a box to the other. So it’s no surprise when he puts in a solid one day of work and then no shows the second day.

Meanwhile, the kids ain’t alright, because everyone’s concerned about the whole Polly being missing thing. Our gang is talking it over in the school lounge, where they’re overheard by one of Cheryl’s minions. It turns out that she did not get sent to Europe, by the way. She must have been missing last week because she had to remake her web. She’s at the sheriff’s office with her mom, who’s haranguing Sheriff Keller about not solving the case immediately. Cheryl interrupts this mess to tell both her mom and the sheriff that Polly is missing, so then Penelope switches tactics to trying to bully the sheriff into arresting Polly for Jason’s murder. Because if she can escape the Sisters of Quiet Mercy But Even They Have a Limit home, then surely she must have done it before. Also, Cheryl tweets about it, which is hilarious. Hashtag sharpen your pitchforks. 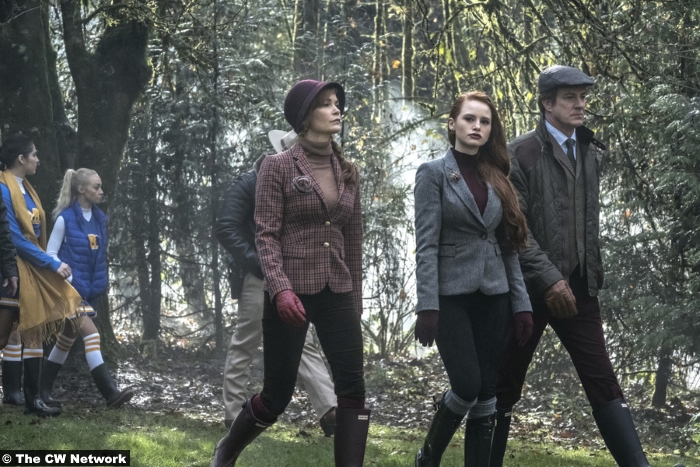 Penelope has shown herself to be cruel and rigid, but she achieves new depths during the bonkers dueling search parties scene. The Coopers have assembled a team to search the woods near the home, since Polly would have had to go that way during her escape. They meet the Blossoms’ own search party, which is composed of people who’ve dressed as if they’re going fox-hunting. It is an amazingly ludicrous image. I freakin’ love it.

The Coopers fight back by having a press conference on the steps of a local church to announce that Polly is with child. It’s a masterfully done move, as it protects her and makes them look like great parents. And obviously, the Blossoms have no real interest in Polly’s well-being, but they make the right noises when Polly finally turns up. (She’s been in the Coopers’ terrifying attic.) They want to prepare a place of love and warmth and…they know we’ve seen their house, right? That house is not a home. And they are not good people. They are maple monsters and they will take your baby.

Cheryl says as much when she meets up with the gang and Polly at Pop’s. She just wants to be there for Jason’s baby. You’re on thin ice, Blossom, but I’ll allow it. 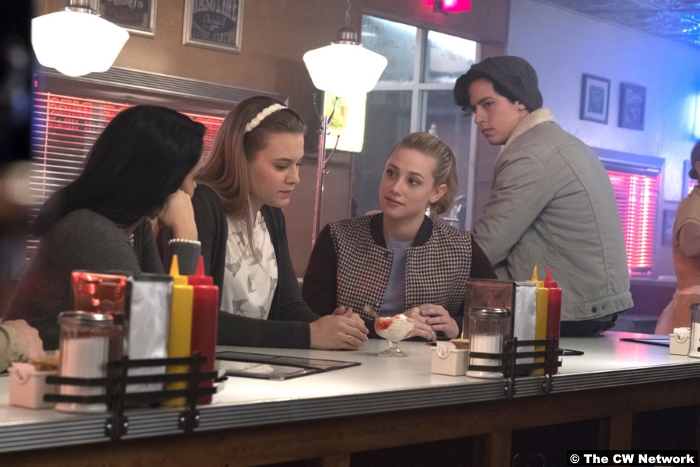 Polly needs a safe place—she needs a home. She can’t stay with her parents, because they want her to give up the baby and she can’t sleep in a closet under the stairs. So Veronica, with Hermione’s permission, invites her to stay with them. (By the way, Veronica’s brief stand-off with Hermione is over, with Hermione confessing to Hiram that she forged Veronica’s name and Veronica accepting her mom’s relationship with Fred as long as it takes place outside their home.)

That’s an easy choice. Jughead, on the other hand, has to make a harder choice. His reasons for refusing to stay with Archie are all related to well, his relations. When FP lost his job and crawled into many bottles, Mrs. Jones left and took Jellybean (who’s now a 10-year-old going by “JB”) with her. Jughead chose to stay behind with his dad, likely out of a misguided belief that he could make him back into a father and make them all back into a family. But he’s a kid. I’ve often dismissed the silly things they do and the silly assumptions they make because the main characters are teenagers. And this is one of those times. But it’s not silly—it’s sad. It’s not Jughead’s responsibility to rebuild his father and his family. FP is the adult and the parent. He should bear full responsibility.

There’s a famous quote from Mr. Rogers about how when tragedy occurs, we should do like his mother instructed and look for the helpers. This isn’t so serious as that, but it’s important that when Sheriff Kelly takes Juggy in for questioning, it’s Fred Andrews who comes to the station for him. That’s a helper and that’s a parent. (And yes, it’s also Fred who makes up an alibi for him and forges the evidence, but that is something else. That’s an accomplice.)  Sure, FP shows up eventually, but it’s too little and too late. He asks for time to get his life together and I hope he does it, but in the meantime, Jughead deserves better. He deserves hope. So when we see Archie rolling out an inflatable bed in his room, it feels like safe. It feels like home.

And when we see FP at home, wallowing in his sad squalor, it feels like Archie must have hung Jason’s letterman jacket—previously seen last week in the now extra-crispy car—in the closet there, because that is (literally) criminally dumb. He probably didn’t kill Jason, because that seems too obvious, but I guess he torched the vehicle. Now why would he go do a thing like that?

8/10 – Despite the amazing and ridiculous (amazingly ridiculous?) double search parties for Polly and all the drama around that, this episode belonged to one Jughead Jones and more specifically, Cole Sprouse. Juggy’s struggles are heartbreaking and I hope things in this crazy town don’t get worse for him.