Riverdale S02E02 Review: Nighthawks – They said this season would be darker, they weren’t lying!

First, let’s get it out of the way: this week’s get-our-entire-cast-in-one-place is a benefit at Pop’s for Pop’s. Why does Pop Tate (Alvin Sanders) need a hand? Well, the “DEATH DINER” graffiti is a clue.

And really, that’s sloppy graffiti. No one died there. Wait, did Archie spray that? Because the idiocy of it would make a lot of sense. Take the wanted poster he’s been passing around. It features a drawing of the gunman–an unrecognizable male (?)* in a homemade hood–with “HAVE YOU SEEN THIS MAN” God watches out for children, drunks, and fools, I guess. Anyway, we’re calling the killer Black Hood now. I mean, they are, so I guess we gotta.

Also, let me not roast Archie too much. He is under a lot of stress, after all. In fact, he pretty clearly has PTSS. He will have to sleep at some point, which is going to interfere with his need to be hyperalert. So that’s how he ends up going to Reggie (now played by Charles Melton), who’s apparently our resident drug dealer. Reggie hooks him up with the ol’–and I can’t believe I’m having to type these words–“jingle jangle,” an amphetamine that also gives you boners? I don’t know. I also don’t know if it has the same effect on ladies. But Midge (Emilija Baranac) buys some for Moose (Cody Kearsley) and her. 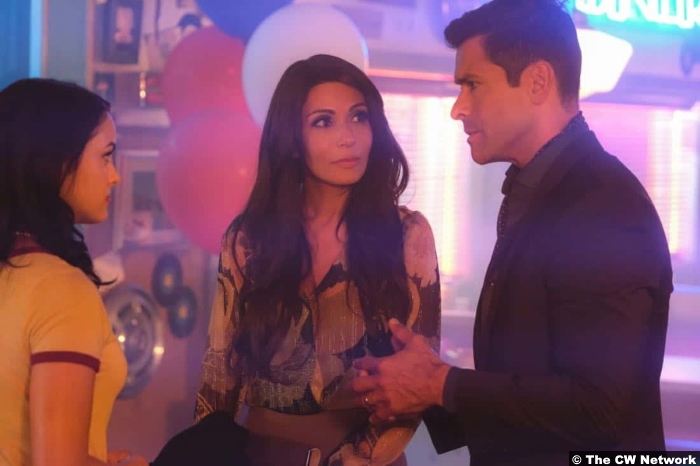 Elsewhere in town, Veronica is still holding a grudge against her father, which she reveals to him is over that letter he sent threatening her mom with legal trouble if Veronica didn’t testify in his case. But all is made well-ish when Hermione reveals that she wrote that letter so that Veronica would help her father. She’s lying, by the way, and Hiram is still a snake.

He’s not a Serpent, though, and we’ve got plenty of them. Jughead meets with FP and his court-appointed attorney, where he finds out that the best deal his dad’s going to get is a cool 20 years. That’s obviously not great, so after being rebuffed by Mayor McCoy, Jughead goes to speak with some of the other Serpents. After dismissing his dumb plan to break out FP, they tell him that he needs to speak with someone more experienced with “snake-handling.” Hey, I went to school with people like that! They direct him, in fact, to Penny Peabody (Brit Morgan), an attorney who’s also a Serpent. She tells him that if he can get FP’s victims, the Blossoms, to speak for him in court, the court will be more likely to be lenient.

As you might can guess, Hell will freeze over like Sweetwater Lake when Cheryl fell through it before that’s going to happen. However, she gets a lot more forthcoming when Betty of all people threatens to spread the video of Cliff Blossom shooting Jason. “You’re a stone-cold bitch, Betty Cooper.” Oh, she learned from the best, though. Cheryl’s efforts are appreciated in court, but the judge is still set on punishing FP until Cheryl “reveals” that she overheard her father threatening FP by threatening Jughead. That gets the judge to suggest re-evaluating the case. So, a minor win. 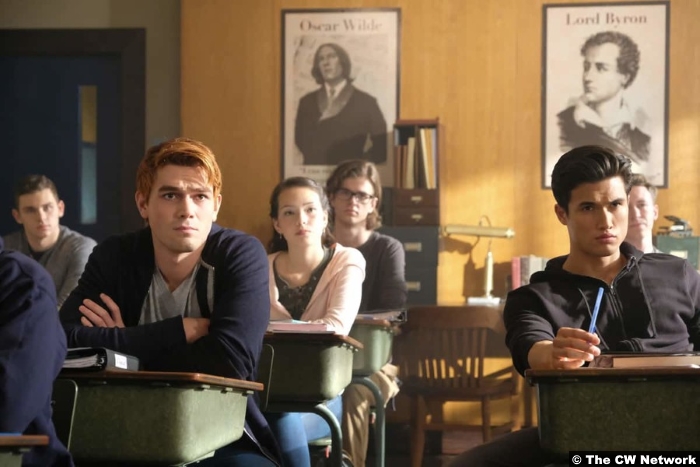 Principal Weatherbee tells the kids about Ms. Grundy’s murder, which prompts Archie and Betty to ask Alice to find out more. She finds out about the cello bow being the murder weapon and Archie thinks it’s obvious Grundy’s abusive ex is the killer. Sheriff Keller says the ex has an alibi, though.

Somehow in all this, Betty manages to organize that benefit for Pop’s, which has lost business since that whole attempted murder thing. The benefit is a big success, though it needn’t be. It seems that just like with the drive-in, a mysterious anonymous buyer has purchased the Chock’lit Shoppe, with the stipulation that Pop will still run it. Veronica’s sure the buyer is Hiram, as it was before, but he swears it’s not him. It is totally him. Also, Smithers has left suddenly. Supposedly, he’s caring for his ailing mother, but I’m sure it has nothing to do with his warning Veronica to go out another door so as to avoid Hiram. 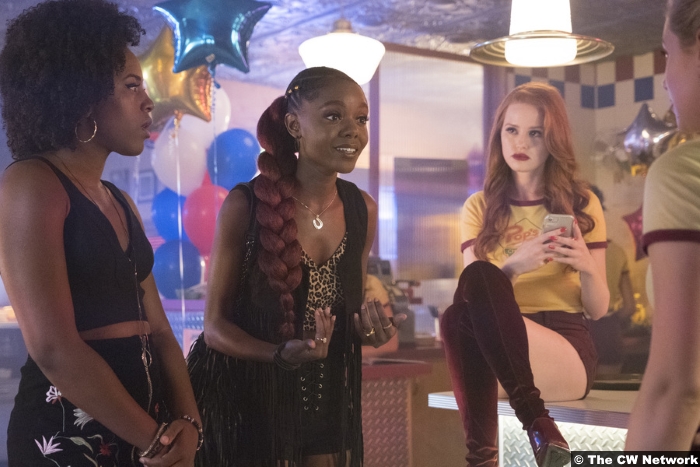 So, as the Pussycats sing a 60s pop version of Kelis’s “Milkshake,” everything seems almost manageable. But this is Riverdale. First, FP is livid that his son consulted with Penny, especially since the only payment she accepted was a favor exchange. As in, this was a favor she did for Jughead, which he will one day return. That’s never promising. Second, if Archie were on high alert already, he’s on DEFCON 3 with the news of Grundy’s murder. Or whatever level has him buying a gun from Dilton Doiley. Chekhov, you old scamp.

And speaking of guns, the last thing we see is Midge and Moose jingle jangled up on a lover’s lane. (I promise that “gun” is not going to be a euphemism here.) They’re just beginning their fun when they spot someone behind the car with a powerful flashlight. One of them says something like, “No, he’ll know we’re here,” which, y’all are sitting in a car with the headlights on. I hope jingle jangle doesn’t make you dumber. We may never know with them at least, because the flashlight carrier is Black Hood. As Donovan’s “Season of the Witch” plays, he opens fire on both of them. RIP (?), Midge and Moose.

9/10 – When they said this season would be darker, they weren’t lying. While we didn’t know Moose and Midge that well, seeing two high school kids be so brutally attacked, if not murdered, was a jarring thing to experience. I’ve had enough of lover’s lane killings this week! As for the rest of it, I’m already bored with the Lodge family drama, but it’s kept to small bits, so that’s okay. I do like how the show is continuing to deal with Archie’s distress over his father’s shooting, as it’s more realistic than his just going back to normal would be. Finally, it seems the ‘dales, River and Green, have a serial killer. Who do you think it is? On that note, let me refer back to the asterisk I placed by “male” up there and ask, hey, where’s Polly?