A trio of Nintendo Switch reviews!

Even though the Nintendo Switch is wrapping up its seventh year on the market, the console is still going strong. It may lack the raw power of the Xbox Series X or the PS5 but its compact form factor, low price, and portability feature make it an exceptional deal, especially with its library of games.

Speaking of, the system has had a busy 2022 with several big titles released from first, second, and third-party developers. If you’re not familiar with those terms, think of a third-party developer as someone like EA or Ubisoft: They are independent game makers who release games on whatever console they want. They might sign an exclusivity deal with Nintendo, Microsoft, or Sony, but those deals are made on a per-game/franchise basis. Second-party devs, on the other hand, are studios in which one of the big three has a financial stake. Think of what Rare was for Nintendo in the 90s, or what Activision is for Microsoft today. They have some degree of autonomy but they make games exclusively for one of the big three. A first-party dev, therefore, is a game maker that operates entirely in-house, working hand in hand with hardware developers and the top producers and directors of its respective “big three” company. Back in the day, Nintendo had the famed R&D4 team, overseen by Shigeru Miyamoto, which produced games like Super Mario Bros. and The Legend of Zelda.

It just so happens that, recently this year, the Nintendo Switch has enjoyed the release of a big first, second, and third-party game, and I’m here with a quick (spoiler-free) review of each… 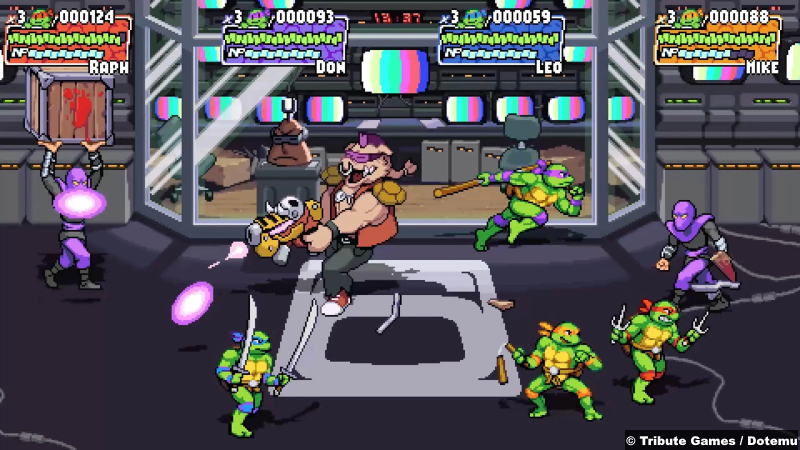 As a youngster, I played countless hours of Teenage Mutant Ninja Turtles 1-3 on my NES. The first one was an insane game, and playing it was more of an exercise in sadomasochism than fun. The second was a delight but the formula was really perfected with part three. It didn’t hurt that the third game, The Manhattan Project, used the Konami Code to unlock extra lives and a level selector. A fourth beat-em-up was released for the SNES and while it was a technical superior in every way to the previous games, I lack the nostalgic connection to it that I have for the OG NES trilogy. Beat-em-up games basically died in the move to 3D as there was no way to accurately translate the core gameplay to the new dimension. It’s only been recently, with the advent of cheap indie games, that the genre has had a mini-resurgence. It hasn’t come back with the force of platformers but there have been some. None, however, have had the appeal to my (young-at-)heart like Shredder’s Revenge.

This game masterfully updates the style, attitude, fun, the simple gameplay of the original titles, but also modernizes it with the kind of quality of life improvements that Shovel Knight brought to its “retro NES-style” gameplay. Developer Tribute Games knew not to copy/paste the NES games with shinier visuals. Those games were products of their time and belonged to an era when gamers lacked the kind of expectations that modern players have today. In short, the new game is easier. I’m not complaining though. A game like this isn’t bought for the challenge, per se, but for the nostalgic feels it conjures up. In that regard, the game passes the test with flying colors. Playing through this game with my youngest son (who is the same age I was when I played through the NES originals) was a joy.

10/10 – Shredder’s Revenge doesn’t do a lot, but it does exactly what it sets out to do, and does it excellently. 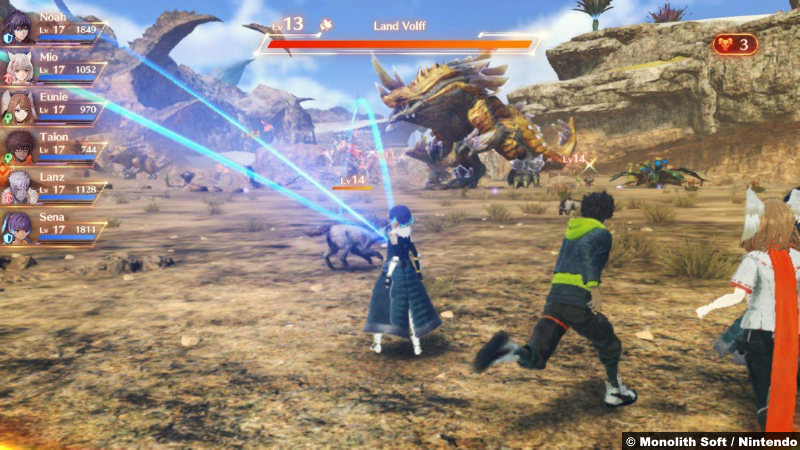 The first Xenoblade Chronicles, which was released for the Wii a decade ago, is one of my favorite JRPGs of all time. In fact, I’ll put it in my top five (sharing such a lofty perch with games like Chrono Trigger, Final Fantasy VI, Mario RPG, and Grandia II). The story was enthralling, the gameplay was a ton of fun, the world to explore was teeming with amazing enemies and locales, and the music remains in my top three video game soundtracks (up there with Super Metroid and Final Fantasy VII).

The sequel was released for the Wii U, Xenoblade Chronicles X, but it was a bit overstretched, trying to do more than the system was capable of. After that, Chronicles 2 came out for the Switch and while it improved upon everything in the technical department, the story left a lot to be desired. This might just be a “me” problem but I felt a lot of Chronicles 2 was underdone compared to the original game. Everything that was different was not as good and everything that was the same felt a bit tired. After three games, the franchise already seemed to be growing a bit stale, so it was with great relief that the third game managed to recapture much of the magic of the original. This feels the way Super Mario 3 did to fans of the original Super Mario Bros game for the NES, who were put off a bit by the departures in the non-Japanese sequel. It feels like a return to form, albeit with a ton of improvements made across the board.

This is still a JRPG so it’s the story that matters to an equal measure with the gameplay. It was the story that let down Chronicles 2 and while the story here doesn’t reach the heights of the first game (with its subtext of seizing one’s own destiny) the story of Chronicles 3 (with its anti-war subtext) comes close. That, plus a refined and fun gameplay system makes this, arguably, the best non-re-release JRPG on the Nintendo Switch.

9/10 – It took a few tries but Tetsuya Takahashi and his team at Monolith Soft have returned their crown jewel franchise back to the lofty pedestal on which it deserves to sit. 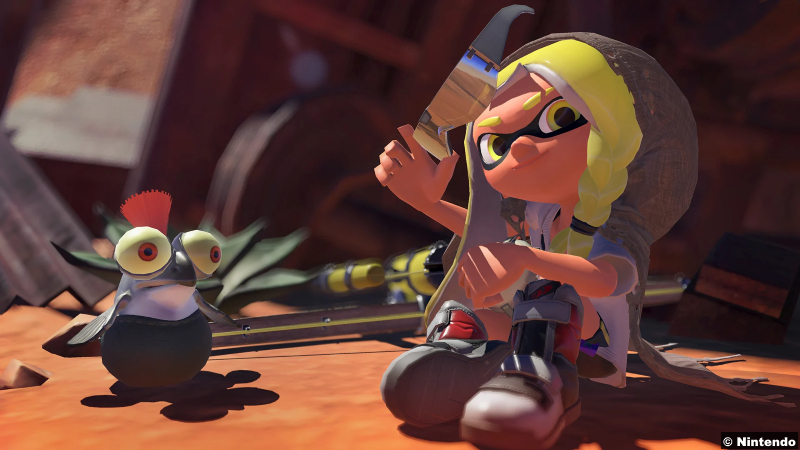 I want to be clear that I do not hate Splatoon 3. I don’t even dislike Splatoon 3. In fact, the worst thing I have to say about Splatoon 3 is that I only just liked it. I didn’t love it, despite the fact that on paper it is the best version of Splatoon released thus far, and I loved Splatoon 2. My problem with Splatoon 3 is simply this: It’s just a souped-up Splatoon 2 and, fair or not, I expect more out of Nintendo than that. This is the company that refuses to release a sequel to F-Zero, despite it being twenty years since the last console game because they don’t want to make a sequel unless they have a good reason.

Meanwhile, Splatoon 2 was selling like hotcakes, working fine, had a solid online community supporting it, and there was basically no one asking for a sequel. If anything, people just assumed “we’ll get a new Splatoon with the next Nintendo console,” and that would be a perfectly appropriate usage of this new franchise (and a perfectly appropriate reason to release an F-Zero game, Nintendo, COME ON). Instead, for no reason other than “it prints money,” Nintendo dropped Splatoon 3 on us. And I can’t even hate them for it: The game’s already sold millions. But still, I expect more. It looks like a slicker Splatoon 2. It plays like a smoother Splatoon 2. All of its new features could easily have been slapped onto Splatoon 2 as DLC.

If Splatoon 2 didn’t exist, and if this was Splatoon 2, this would be a 10/10 game. So shouldn’t it be 10/10 anyway? Why does the existence of another game hurt the quality of this one? It doesn’t, technically. If you loved the first Splatoon for the WiiU and, for whatever reason, didn’t buy the sequel, then by all means: You will love Splatoon 3. If you bought the second game, you will love this one too, but you’ll also hate that you have to buy it (the online community playing the second will continue dropping to nothingness in the immediate future). That’s gotta be worth losing a point or two.

8/10 – A great game hindered by a lack of legitimate reason (from the gamer’s standpoint) for its existence.

There you have it, three good to excellent games you can pick up right now for your Nintendo Switch. If you’re looking for something new to play at home or on the go, you can’t go wrong with any of these!