As you might have been able to tell from my revulsion, the Archie/Ms. Grundy storyline is not my favorite. So, good news, everyone! This week, it’s the A plot!

Intrepid Betty takes the info she and Jughead learned last week and plugs “Geraldine Grundy” into SearchWeb or whatever Riverdale’s fake search engine of choice is. To absolutely no one’s surprise, there are no hits for the Riverdale High teacher. The only thing that comes close is an old lady, who is obviously meant to be the Miss Grundy of the comics, the white-haired scold with a nose a bird could perch upon.

Betty then enlists Veronica in her spying, much like how she recruited Jughead last week. He’s unavailable for spycraft this week because he’s bereft over the end of Riverdale’s Twilight Drive-In, which is closing after its sale to a mysterious buyer. At first, a shuttered drive-in seems like a weird concern for a teenager in the year of our Lord 2017, but we’ll learn later what that’s about.

But before we get to that, back to the curious case of Ms. Grundy. With minimal assistance from Veronica, Betty breaks into Ms. Grundy’s Bug. She adorably brags that she got her lock-picking skills from Nancy Drew books, as she opens a lock box in the car. Inside the box, there’s a Minnesota driver’s license for a Jennifer Gibson with Ms. Grundy’s photo on it. There’s also a gun. I realize this is a series based on a comic book, but it seems cartoonishly dumb to keep all this in your car, rather than in your house. It reeks of an obvious plot device and it’s a rare stumble for the show so far. 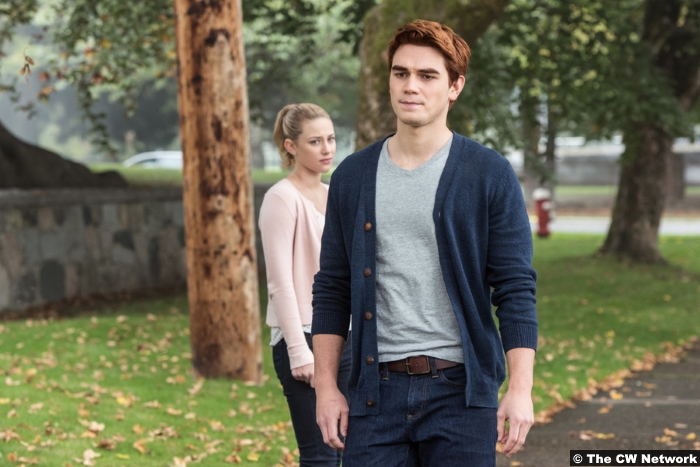 But hey, this is an episode for those. After Betty finds the stash, she confronts Archie with what she knows and he reacts with predictable teenage dramatics. Betty doesn’t understand what they have, etc. Betty does understand that Grundy or Gibson or whomever she is is isolating Archie from the people who care about him, though.

He does confront Ms. Grundy about what Betty found and in return gets a tragic tale of domestic violence that is almost certainly false. (And even if it were true, it means that this adult woman has been putting this child at risk.) And that’s where the story would stay, except that Alice, being the nosy parent she is, finds first Grundy’s gun, which Betty kept for no sensible reason. The she reads Betty’s diary in which her daughter has helpfully detailed everything about Ms. Grundy and her predatory ways, and she orchestrates a confrontation with the teacher and way too many other people. Fred, the kids…Pop might have been there, I don’t know. Alice frames this as her just trying to protect the children from a sexual predator, which is the good and right thing to do, but it very quickly becomes evident that she cares less about the teacher and more about destroying Archie for some reason. Like, I get that he’s a ginger teenage boy who’s close to one of her daughters a la Jason Blossom, but her vendetta against him is just bizarre. And by focusing so much bile toward him, she takes the focus away from the actual bad guy-Ms. Grundy–and turns it on herself. Betty threatens to pretend that she just snapped (like Polly) and made up everything. Fred is so stunned by Alice’s behavior–she’s practically breathing fire–that it doesn’t seem to sink in for him that his son’s teacher is a statutory rapist. Ms. Grundy volunteers to leave town so it won’t have to come to Betty’s plan and yes, that is a much better option for her than publicity and jail. (Oh and the questions one, including the Sheriff, might have if they knew that she has that gun and that Jason was her independent study student last year.) Archie…is also there. 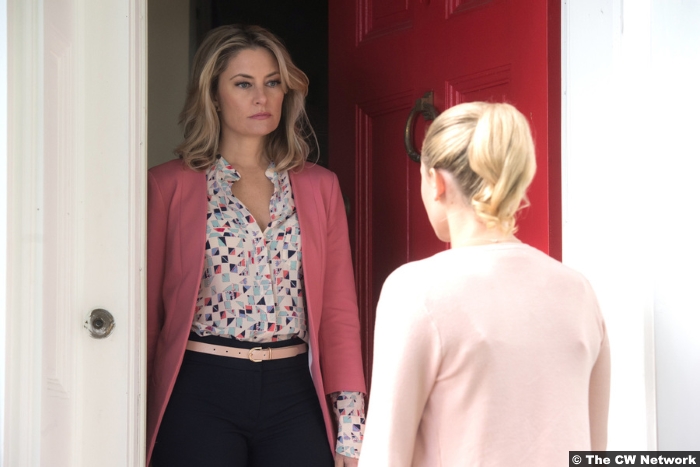 Ms. Grundy does leave town, but not before obviously salivating over some youths, so any question as to whether she was a gross predator is answered. For her part, Alice does get a moment later to show a softer side, which is good. It’s obvious she’s terrified of Betty having the same issues as Polly, but she could go about it all in a much less dragon-lady way. Squeezing the life out of Betty is not going to keep her safe.

And speaking of dragon ladies, Cheryl. She doesn’t get a whole lot to do this week, but she does catch Hermione Lodge in a heated confrontation with a Southside Serpent behind Pop’s and can’t wait to show the pic to Veronica. When she asks her mom about it, Hermione brushes it off as a conversation with an old high school buddy. Sure, Jan.

All of this is taking place while they’re getting ready to close the drive-in with a final showing of Rebel Without a Cause that it seems everyone in town attends. Kevin, lamenting earlier to his dad that he’s the only “nice gay kid” at Riverdale High, ends up hooking up with a younger member of the Serpents. Yay. Not yay: When Kevin and Sheriff Dad return home, someone has broken in and destroyed the sheriff’s True Detective murder case wall.

Also earlier, Jughead meets with Mayor McCoy to try and save the drive-in and even drops in a reference to his younger sister Jellybean, but his efforts are for naught. Of course, he doesn’t know what Veronica will find out at the showing, which is that McCoy is in on the sale with the buyer, who is Hiram Lodge. He’s orchestrating all this from jail with the assistance of his wife and that Southside Serpent, to whom Hermione is supposed to be giving money for helping decrease the value of the property. I assume the memo line on the checks reads something like “nefarious deeds.” [Yes, I know he’s paid in cash.] 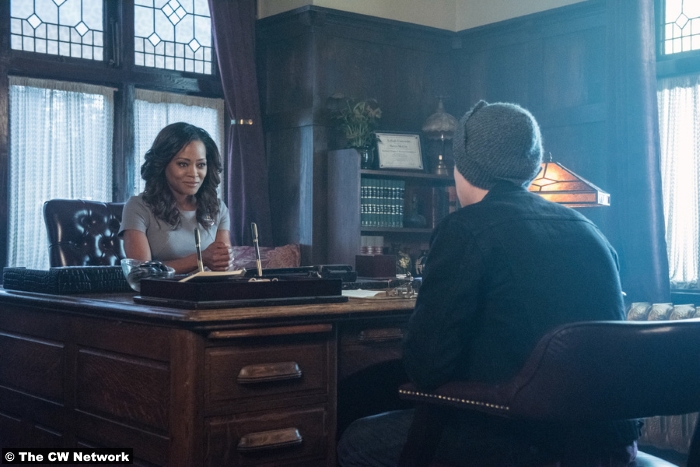 Since it’s Fred’s construction company that’s doing the demolition, Jughead next tries to appeal to him, mainly by reminding him that he fired Jughead’s dad. Yeah, but he fired him for stealing, so I don’t know where Jughead is going with this. In any case, it doesn’t work.

Again, this may seem like a lot of effort for a teenager, but we find out in the heartbreaking coda why he’s hustling so: he lives there. And if you’re wondering what kind of parental situation would put a kid living in a back room of an old drive-in, it’s because that Southside Serpent we’ve been seeing is Forsyth Jones II (Skeet Ulrich), Jughead’s father. So where’s Jellybean?

7/10 – There was so much other good stuff going on in this episode that it’s a shame we had to spend so much time on the Grundy problem. Also, the resolution of the Grundy problem–a known predator and possible murderer gets to skip town without a care in the world–is unsatisfying, to say the least. At least it’s over for the moment?