First of all, apologies for being tardy to the (birthday) party. I had some technical difficulties. The technical difficulty is that I was laid out after seeing Molly Ringwald make her debut appearance on Riverdale. But before we get to that, it’s Juggy’s birthday! 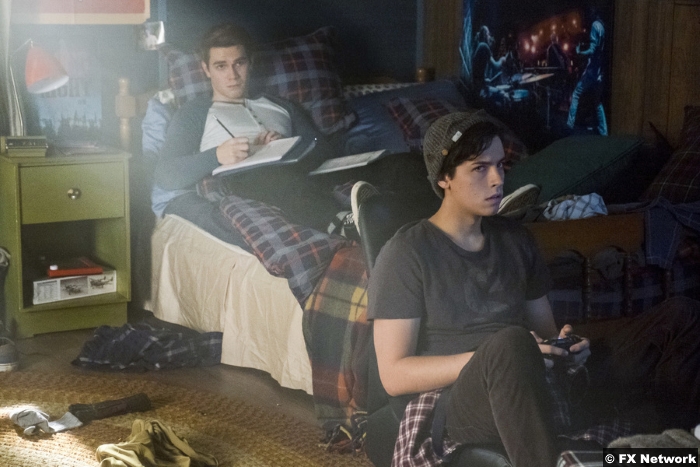 Also, Chuck’s back at school. Betty is immediately concerned, especially when Chuck makes a beeline for Ethel. Ethel says everything’s cool–Chuck’s just apologizing–but he can’t help himself from needling Betty about her quick turn as “Dark Betty” when, you know, she almost drowned and/or scalded him. Betty manages to keep herself together, but she only does it by clenching her fists so tightly that she has little half-moon imprints of her nails in her palms.

She needs something to take her mind off Chuck and it seems that Jughead has never had a birthday party, so Betty takes it upon herself to throw him one. Unfortunately, she never stops to ask herself if this is something that Jughead would actually want. He prefers to spend his b-day catching a double feature at the Bijou theater, usually with Archie, but Archie tells him that Betty’s going to go with him, instead. When the big night arrives, she fakes getting scared–they’re seeing a double feature of–so they can leave early. Betty, by the way, is wearing a wonderful sweater whose crown design is clearly a reference to her boyfriend’s famous hat.

The party’s at Chez Andrews, because Fred has gone out of town to meet with Mrs. Andrews about their impending divorce. The shindig is supposed to be “inner circle only,” which includes: Archie, Veronica, Kevin, Kevin’s serpent beau Joaquin, Ethel for some reason, and FP. FP and Joaquin make sure to have an incriminating-sounding and looking conversation in Archie’s bedroom, so Alice Cooper can spy on them from Betty’s room. 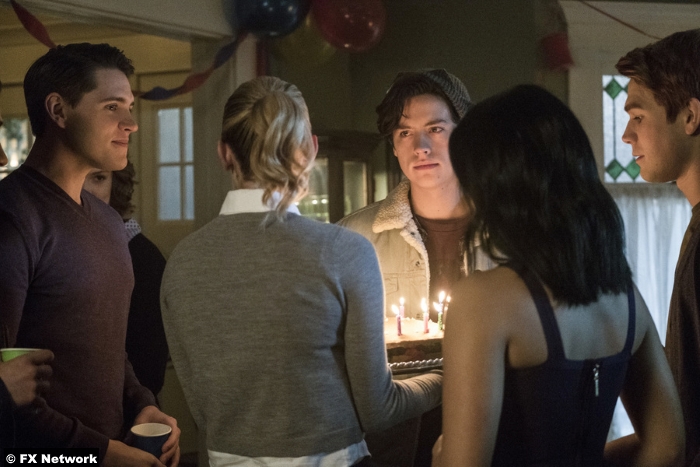 Betty and Jughead arrive and everyone yells, “Surprise!” and it is immediately evident that Jughead is not into this in the slightest. It is also immediately apparent that Betty wants so badly for it to go well. And it might have, had it stayed a quiet gathering, but unfortunately for the gang, Cheryl and Chuck have teamed up to ruin it. They bring over a big crowd and kegs. Archie, who’s acting like he’s been mainlining alcohol all day, welcomes the crowd (and kegs). [By the way, Chuck wants revenge because he was almost murdered by Betty and Cheryl wants revenge because Veronica outdanced her at cheer practice. However, I must utter a giant “AS IF” to Cheryl needing a reason to ruin someone else’s party.]

In the parlance of today’s teens, everyone gets drunk af. Archie drunk dials Fred and begs him not to sign the divorce papers. Jughead and Betty have a big blow-up because she threw the party because she wanted to look like a good girlfriend, not because it was something Jughead wanted. He basically breaks up with her without actually breaking up with her because she storms out before they can get to that part. After that, Jughead wants to leave, but he’s stopped by Cheryl and Chuck, who are putting the main part of Cheryl’s plan (let’s be real here on who the real mastermind is) into practice. They goad everyone into playing “Sins and Secrets,” which is allegedly a game like Truth or Dare, but is really just an excuse to tell everyone’s darkest secrets. We know all of them already, so it’s nothing shocking to us, but it is quite the stunner for this crowd.

Revealed: Betty became Dark Betty and tried to kill Chuck, thinking he was Jason; Archie was involved with Ms. Grundy; Hiram Lodge is the secret buyer of the drive-in land.

Veronica is throwing back drinks left and right because she didn’t want to testify for her daddy and in exchange, he threatened her by implying that he would drag her mom into his mess. She also suggests during Sins and Secrets time that Cheryl killed Jason because he chose Polly over her, but she doesn’t mention what Archie heard last week about Cliff Blossom being responsible for Hiram’s arrest. Anyway, her suggestion about Cheryl is but a pebble tossed into a pond compared to the whirlpool the other secrets create. These kids are scandalized.

I’m not quite sure what Cheryl wanted or expected from this little game, but what she and everyone else gets is Jughead getting punchy with Chuck. After that, FP throws Chuck out and announces that the party is over. Then he exchanges unpleasantries with Alice that include some sniping about her upbringing, which was a little less luxe than the way she lives now. Also, he refers to her as a snake, which makes me hope that she used to be a Serpent. 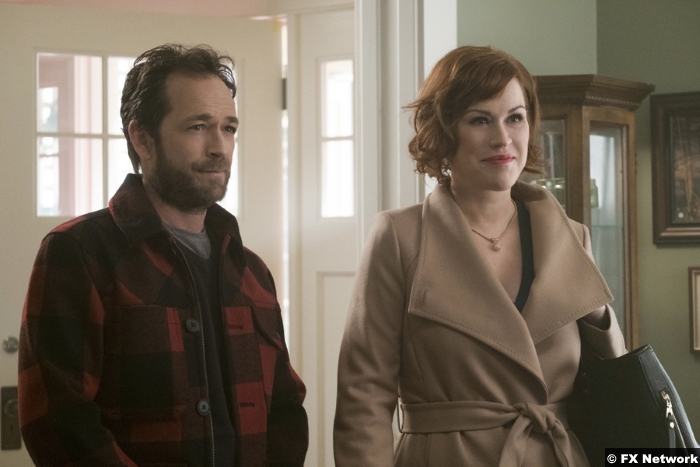 After the party, Archie and Veronica hook up and Jughead and Betty make up. The next morning, Archie cleans up the giant mess everyone else left and Fred shows up with Mrs. Andrews in tow.

8/10 – Who doesn’t love a party (besides Jughead)? Overall this was a standard good episode, although the Sins and Secrets thing seemed like a lazy way to get viewers caught up on all the plotlines they may have missed. However, I’m giving them the half-point they lost for that for casting the woman who was probably the most famous teenage redhead since Archie as his mom.