Riverdale S01E02 Review: A Touch of Evil – Continues to entertain

In week two of Riverdale, I’m pleased to report that I’m still just as charmed by the delightful light sleaze of the newest teen soap to grace The CW’s doors.

The pilot episode was so confident that I was very curious to see where they would go with the second episode. The answer is, not that far from where the pilot went, but it’s still entertaining as all hell.

As might be expected, we pick up shortly after the bombshell development of last week: the discovery of Jason Blossom’s body in the river. Archie can’t sleep, as he’s so consumed with guilt for not reporting the gunshot he and Ms. Grundy (Sarah Habel) heard that July 4th. Ms. Grundy, sexual predator, is adamant they shouldn’t go to the police, telling Archie, “I could lose my job, you could be expelled, we could go to jail.” Only one of those things is true, of course, but teenager Archie doesn’t know that. He also apparently doesn’t know that he could just go to the cops himself and leave her out of it. Just say you were at the lake that day and heard what you thought were fireworks–it was the 4th of July, after all–but since Jason’s body was discovered, you realized you might be a witness. [It’s the same with it being Moose (Cody Kearsley) and Kevin (Casey Cott) discovering the body. Like, they don’t have to tell anyone they were there for a tryst because 1) everyone seems to know that already and 2) it’s irrelevant.] 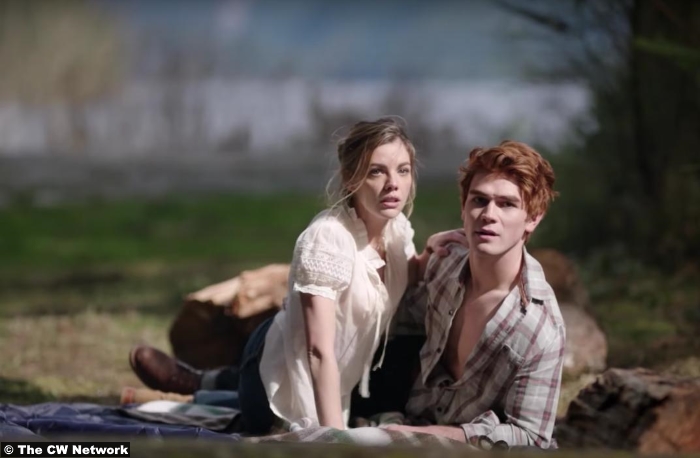 Of course, this all turns out to be irrelevant, because by the time Archie gets the gumption to go to the police, the coroner, the wonderfully named Dr. Curdle, has discovered that Jason did not actually die on the 4th. So what did Archie and Ms. Grundy actually hear?

That’s a mystery to solve another time, I’m afraid. A mystery that does get solved this week, though, is what happened to disrupt the Archie/Jughead friendship. It turns out that they were supposed to take a road trip that 4th of July week, but Archie blew off Jughead to hook up with Ms. Grundy. That may not seem like a big enough thing to ruin a friendship, but you know…teenagers. Anyway, Jughead figures out what’s going on, but it doesn’t take Holmesian-type detecting to do so, since Archie and Ms. Grundy are cuddling in full view of her classroom door’s window. You’d think a woman so afraid of being found out would have more sense.

In other friendship struggles, Veronica lays it on thick to repair her relationship with Betty, giving her a bouquet of yellow roses, gift certificates for a mini spa day, and for some reason, Magnolia cupcakes. Is this taking place a decade ago? 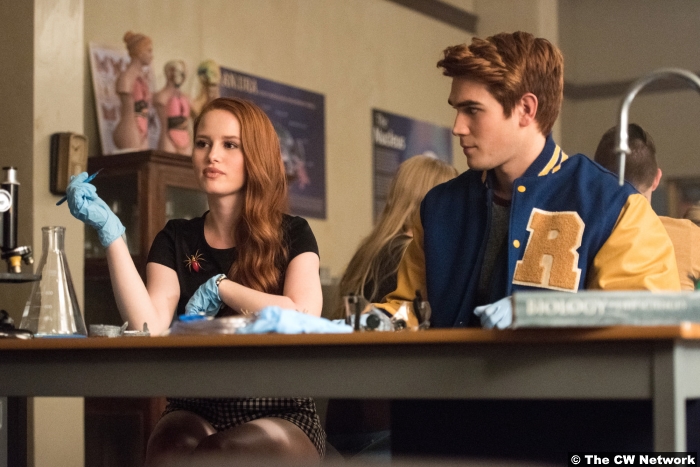 Things seem smoothed over, but then they fall apart again when the girls bicker at cheerleading practice, when Veronica tells Betty the simple truth that it’s not her fault that Archie doesn’t have feelings for Betty. Betty chooses instead to take scary Cheryl on her spa day, but that devolves into a bad time at the Coopers’ when it becomes clear that Cheryl only wants to pump Betty for info on her sister, whom Cheryl thinks may have killed Jason. Betty’s sister is in a group home, so that doesn’t seem likely, but you never know in this town. In any case, Betty orders Cheryl out of her house, with the added threat that she’ll kill the remaining Blossom twin if she doesn’t hustle to it.

All these bad feelings get forgotten at the pep rally, where we meet Mayor McCoy (who is also Josie’s mom and is played by Robin Givens), Josie herself (Ashleigh Murray) and the Pussycats perform their take on the Archie classic “Sugar Sugar,” and Cheryl gets choked up seeing Archie in Jason’s number. (Side note: Why couldn’t they retire his number? That’s weird.) She rushes off to the locker room, where Betty and Veronica follow her. As Veronica is comforting her, she tells her through her tears that Jason was “supposed to come back.” What’s that mean? Nevermind for now, because we don’t find out in this episode.

We do, however, get to see the classic foursome–Betty and Veronica, Archie and Jughead–having conciliatory milkshakes at Pop’s Chock’lit Shop as they achieve peace for the time being. 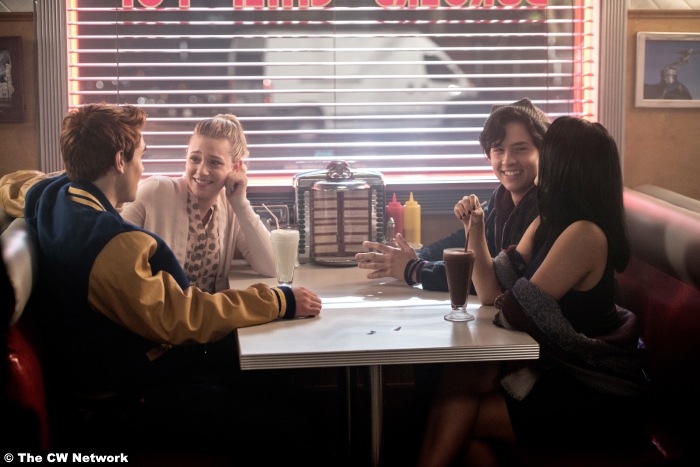 The next morning, Archie heads to Principal Weatherbee’s office to tell him about hearing the gunshot. However, Weatherbee and Sheriff Keller (Martin Cummins) are on their way out the door in a way that makes it clear that they’re about to pull someone out of class. They go directly to the lab, where all our friends are and we find out that it’s Cheryl they came for. She immediately puts her hands out to be cuffed, but the men tell her they don’t have to do it like this–they can be discreet. Cheryl refuses, though, because her classmates will find out soon enough. Veronica asks what they’re going to find out and Cheryl simply answers, “That I’m guilty.” Wait, what?

8/10 – Some of the logical leaps the characters make may not make sense to me, but the show continues to be so entertaining that it’s easy not to dwell on the little things.