We’ve seen that Black Hood has a specific interest in Betty and their relationship becomes even more personal this week.

He’s already reached out to her via letter and at the end of last week’s episode, he was on the phone. This week, we get to hear those conversations.

[Apologies for the delay–I’ve been traveling.]

We’ve mentioned Pretty Little Liars a few times in the comments of previous episodes and Riverdale really leans into those elements, particularly the menacing messenger ordering someone to carry out tasks or else. (There’s also a distinct Scream influence here.) The “or else” for Betty is a threat against Polly, who’s not as safe at the farm as she and Betty think.

The first chore, publishing her mother’s teenage mugshot and details of her serpenty past, is the easiest for Betty to undertake. She balks at first, but after Alice implies that Betty made up that letter from the Black Hood, Betty practically sends it out that second.

The subsequent tasks are not as easy. First, she must cut Veronica out of her life, which she attempts with a virulent rant at Veronica’s party. It sounded so much like Alice coming out of Betty’s mouth that I was ready to call an old priest and a young priest. And yet, there is an element of truth to what she’s saying. Would Veronica be friends with any of them if she had other options?

Veronica’s party is a chance for the Riverdale bumpkins* to hang with her fancy friend from the big city, Nick St. Claire (Graham Phillips).

*Note: This is not how I’d describe them, but it’s clear this is how Nick sees them. 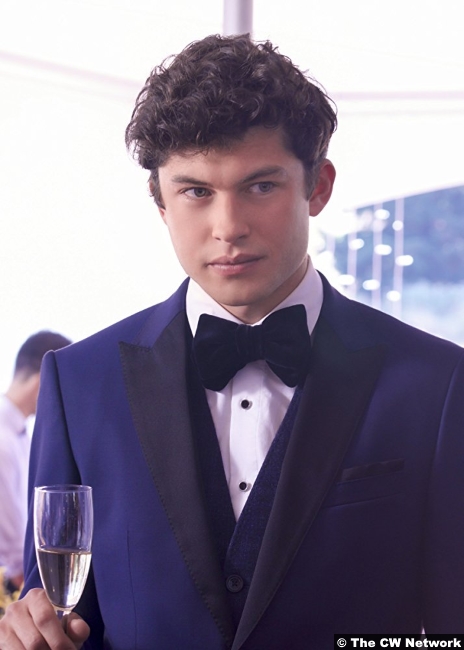 In fact, Nick is probably an ugly shock for anyone who’s familiar with Phillips as Zach Florrick, the good son of Julianna Margulies’s The Good Wife. He is privilege writ large. He’s an glittering ooze, the kind of handsome young man whom parents love, while only his peers see the real him. He is hashtag rape culture.

And he is Veronica’s responsibility to entertain, as Hiram needs a cash injection from Nick’s powerful and rich–powerfully rich–father and his influence on other investors. So she does what a lot of girls (and boys) do, as has been painfully reinforced with the revelations that have been coming out lately. She smiles and goes along. She even does jingle jangle at Nick’s insistence. But when he tries to get her in bed, she does put up a fight. [FORESHADOWING.] He explains that he’s just been so out of sorts from his revolving door in and out of rehab lately and look at him, he’s a sympathetic little bunny.

This all comes to a head at an open house gala the Lodges throw to celebrate their new real estate venture. The gala is a mostly boring affair whose only saving grace is Alice’s entrance. Soundtracked by Imagine Dragons’s “Thunder,” she struts into the party clad in a plunging front romper accessorized by a serpent choker. Alice is that bitch. Her dismissal of Hal is almost an afterthought.

At the gala, Veronica performs with the Josie and the Pussycats, which gives her an excellent vantage point from which to spy Nick walking out an obviously over-inebriated Cheryl. There are some things on Riverdale that strain credulity, but sadly, this scene does not. However, I wish that all real life scenes ended as this one does, with the Pussycats plus Veronica kicking in the door and then kicking in Nick. 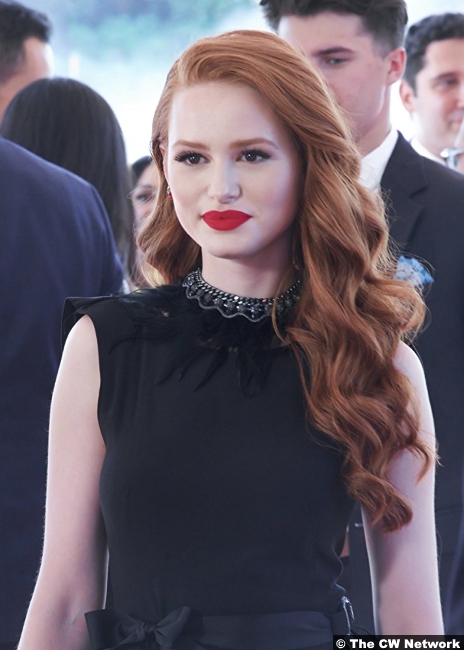 So I guess Hiram’s not going to get those investors. His real estate venture is for something he’s calling SoDale. It sounds basically like he plans to bulldoze the Southside poors and replace their home with “luxury apartments, shopping, and even a golf course.”

As if the Southside doesn’t have enough problems. The Serpents want to blow up the Register office, in light of Alice framing Black Hood as a Southside-caused issue. Jughead decides it’s easier to change things from the inside, so he undergoes Serpent initiation. This entails taking care of Hot Dog (the III), the gang’s pupper, memorizing the Serpent laws, and retrieving an item from an aquarium with a live snake. It’s venomless, but he doesn’t know that until after he’s bitten. Finally, he has to undergo a gauntlet. 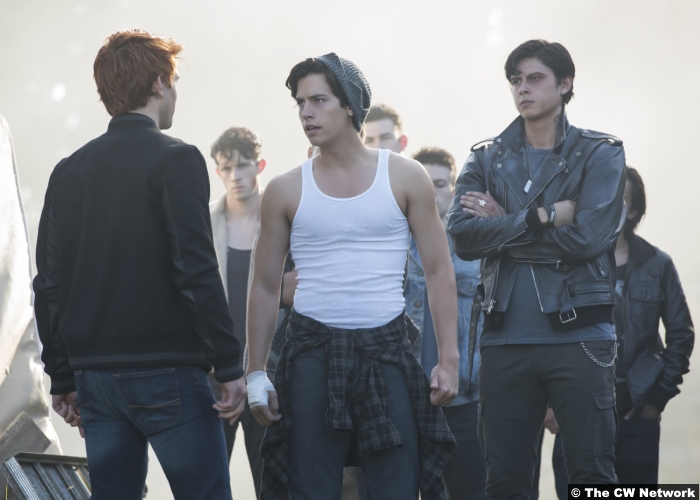 This would be a painful task on any regular day, but Jughead barely seems to feel it. That’s because Betty has just gotten Archie to carry out the third task requested of her: cut Jughead out of her life. She couldn’t bear to crush her boyfriend herself, so she made his best friend do it. He probably would have made it a lot less painful, but seeing Jughead palling around with the guys with whom he fought just a few days ago made him slow down the bandaid-pulling.

So Jughead endures the gauntlet and is now a full Serpent. And like Betty, he’s miserable. I’m going to guess that’s why he kissed Toni, since they don’t have that much chemistry, in my opinion.

Meanwhile, Betty is having phone fun with Black Hood. He’s been offering her the chance not only to keep her sister alive, but also to ask questions. So far she’s found out not a whole lot, but we do know that she would recognize Black Hood if she saw him without the mask.

Their conversations are undertaken with the caveat that Betty cannot tell the police or her parents. Instead, she’s been telling Archie, hence the Jughead breakup. Black Hood, like many a TV and film villain before him, moves the goalposts and decides that’s a violation of their agreement. Polly is as good as dead unless Betty gives him an alternative. And she barely has to think before she tosses Nick to him.

9/10 – The pacing has been a little slow this season, likely because the second season will stretch to 22 episodes. However, nothing about this week’s episode was slow. It was high drama. We still don’t know that much more about Black Hood’s true identity, but when we’re having this much fun, we can wait.