I’m not sure what effect Archie thought the Red Circle fetish video/”Unabomber-like manifesto” would have in Riverdale, but the actual result is what you should expect.

The adults on the north side see it for what it is: a dangerous bit of provocation that could throw a spark on the tinderbox that is their community right now. The south side sees it as an affront. In their view, Black Hood is targeting northsiders, so he’s doing them a solid.

Nevermind that he’s killed only the one person and that person wasn’t even in Riverdale. It’s not hard to see or understand the kind of fear this can spread. Tonight’s episode title refers to the movie about the Texarkana (TX) “Moonlight Murders,” in which a hooded figure shot couples on lover’s lanes and in other locales. It was similar to the MO that the later Zodiac would take on, except that Zodiac gets more ink because he sent ciphers. 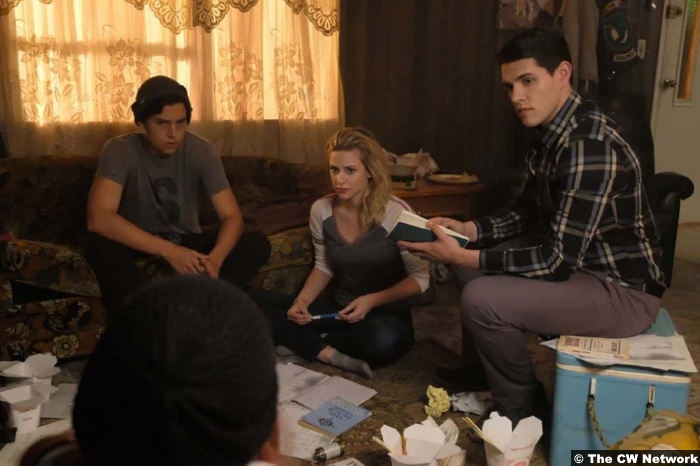 Tonight, the Black Hood does, too. Going through the Blue and Gold’s mail, Betty finds a manila envelope with her name in all caps, much like the “COOPER” envelope left at her house. And I have to say again that I would call the police immediately, if only for the forensic value of that envelope. However, Betty doesn’t want to turn over the contents of the envelope, which include a cipher and a letter, because Sheriff Keller will tell Alice and Alice will put the kibosh on Betty’s further involvement.

I kinda understand that, but it’s also a bit of hypocrisy from Betty. She didn’t want Kevin out cruising, because it was dangerous, and then she turns around and risks her own safety. The fact that the first person she confides this to is Kevin is just the cherry on top. (PS: Kevin has stopped cruising—the real world, that is—and is now back on *ahem* RedStateMeat.com.)

The letter enclosed says that Black Hood is undertaking this murderous mission because of Betty. She immediately puts together what some fans already have, that he’s referring to the speech she gave at last year’s Jubilee. It will take her longer to figure out the cipher, which she does only because she realizes it was specifically meant for her. The symbols are apparently all out of a Nancy Drew code book, which Betty would obsessively check out as a child. I am Betty, Betty is me.

I am also Kevin in the meta moment where he reacts in horror to Toni’s joking suggestion that Betty “loosen [her] ponytail” so that she can think better. “Betty’s ponytail is iconic and beyond reproach.” I mean! 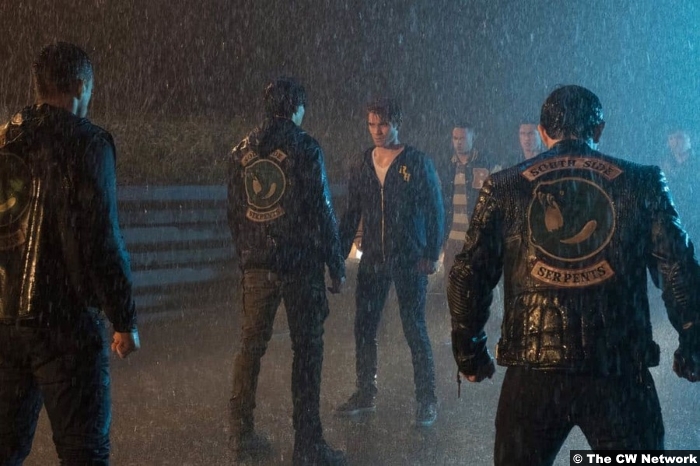 Meanwhile, Principal Weatherbee gives Archie an ultimatum. Until he stops this vigilante nonsense, the football team will be nonexistent. Archie, of course, ignores naysayers, preferring to take it to the limit. He’s still suspended, though, because Weatherbee and Sheriff Keller searched his locker, finding the black hood that Reggie had used to prank him. I’d ask why in the world he kept that and kept it in his locker, but I’ve met Archie. Take it to the limit one more time!

And as it turns out, the limit is a soggy bridge fight between the football team and some knife-wielding Serpents, who are mad because Archie went to the Southside to spray paint a giant red circle. We’ll just call the actual fight a draw, but at least it gets Archie to come back to the bridge with Veronica and toss away the gun.

I say “soggy” because the whole thing takes place in a rainstorm, as does Mayor McCoy’s town hall meeting. That’s where Betty and Jughead are after they crack the cipher, which reads that Black Hood will attack again where his mission began. Understandably, they assume this means the same place Betty gave her speech.

So they rush into the meeting, which has already gotten heated, and yell for everyone to get out. Then the power goes out. Mayor McCoy urges everyone to remain calm and stay seated. Meanwhile, Betty walks across the room, in full view of everyone, and pulls the fire alarm. And everyone leaves. Like, you all just saw her pull that, but whatever. 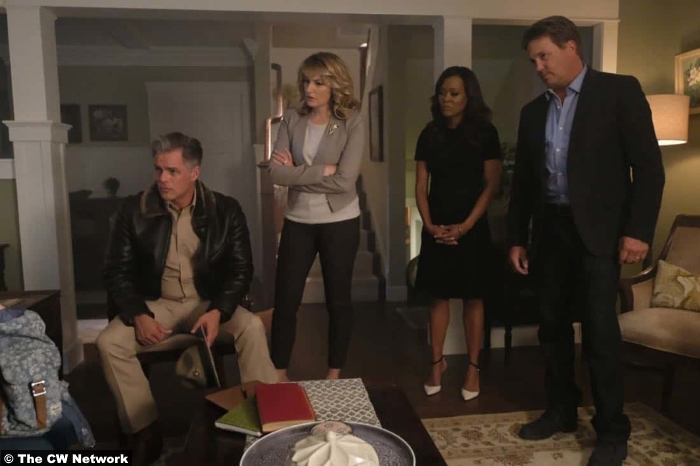 Black Hood doesn’t show, so there’s no distraction from Betty having to admit to her parents and the mayor and the sheriff about the letter. Alice is predictably furious, especially since Betty helped spirit Polly out of town without telling their parents. I think we can reasonably assume that Betty is now grounded, as she’s sulking in her room at episode’s end. That’s where she is when she receives a phone call. The caller ID says “UNKNOWN,” and we might not know his name, but we know he wears a hood.

8.5/10 – A lot of this—the bridge fight, Veronica’s Red Circle fan club tees, the “town with pep” becoming the town that dreaded sundown—could come off as ridiculous, but it doesn’t. Well, not all the way. That’s because the show fully commits. That doesn’t mean they don’t occasionally wink at the audience, like Kevin’s aforementioned meta moment, but those moments are wisely few and far between. That means that as the tension increases in Riverdale, we feel it, too.