Riverdale S02E03 Review: The Watcher in the Woods – We get it, Hiram is shady!

So it turns out that Riverdale did not introduce us to Midge (and reintroduce us to Moose) just to kill them off in the same episode. That would have been messed up. Bold, but messed up just the same.

Instead, Moose shielded Midge. He still got shot, but he’s alive.

Also alive is Polly, whom I was wondering about last week. I tend to forget that more time has passed in our world since we last saw Riverdale, so Polly isn’t as hugely pregnant as I’d thought she’d be by now. What she is, though, is scared. 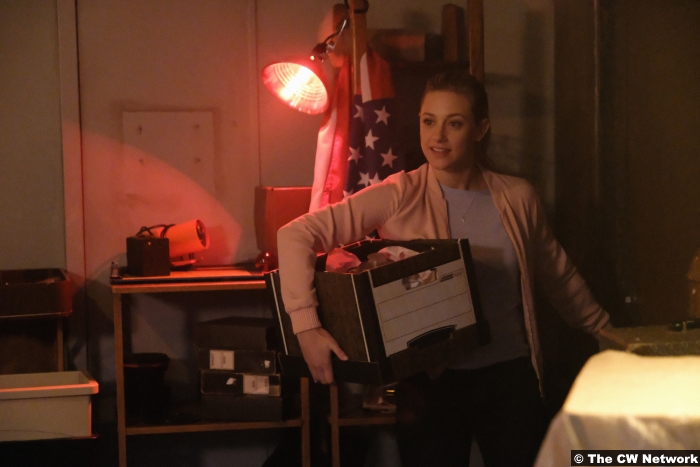 That’s because Black Hood has dropped off a manifesto at the Coopers’ house, since Ma and Pa Cooper run the local paper (if you forgot). I’m a little more concerned about the fact that the package apparently wasn’t mailed. So he was at their house. On their front porch.

Like, that’s scary enough, but think of the forensic possibilities. I’m talking to you, Coopers, who all got your grubby fingerprints all over the letter.

Anyway, in his missive, Black Hood, who’s enclosed Fred’s wallet and Ms. Grundy’s sunglasses, claims to be a mission killer who’s after sinners. The adulterer, the child predator [thank you again for acknowledging that], and the drug-addled teens. As Polly is unwed and pregnant with her late cousin’s baby, she figures she’s in the top 5, at least, of Black Hood targets. So she packs up to go stay at a farm out of town.

Also living dangerously is Kevin, who’s taken to running Riverdale’s cruising spot, Fox Forest. That’s how Midge and Moose were saved so quickly—Kevin was in the woods when he heard the shots. Betty pleads with him to stop being so reckless when there’s a killer on the loose—and even Cheryl gets involved—but he doesn’t stop until a man tries to give him a ride home. Kevin imagines himself getting in the car and then getting a knife in the gut for his troubles, so he waves the man on and just goes home. I know it’s hard for Kevin to find someone in a little town like Riverdale, but Betty and Cheryl and his dad, who sings the same tune as the girls, are right. You gotta keeps your wits about you in a situation like this. We’re worried about you, Kevin, because we care. That’s no reason to gray rock Betty, even if she did tell your dad what you were up to.

Also, I forgot that Moose was bisexual and in fact, was hooking up with Kevin in the series premiere. 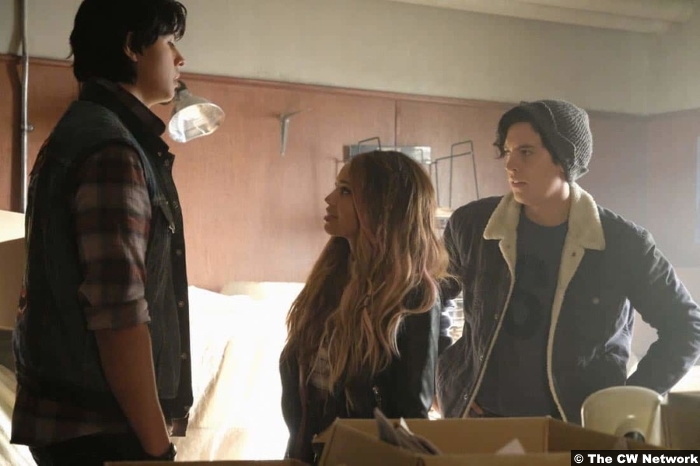 Across town, Jughead has started school at Southside High, where kids–*five second long sigh*–jingle jangle right out in the open and where he immediately starts trying to revive the school’s paper, the Red and Black. He’s still trying to stay out of the thug life, as encouraged by FP and Betty, but he’s already feeling the pressure. The Serpents at school war with the Ghoulies [I love comic book names] and Toni (Vanessa Morgan), his Serpent-aligned peer guide, warns him that the Ghoulies would love to take out FP’s son. He tries to walk a lonely road, but ends up slithering over to the Serpents once the Ghoulies catch him alone in the school and beat him up. But was that really the Ghoulies? It’s shot so we see only Jug’s shadow, not who’s actually beating him. Also, he was in the school so late because he was working on an article about how the Ghoulies facilitated Cliff Blossom’s drug pipeline. That’ll go over well.

8/10 – The Lodge scenes still drag for me—we get it, Hiram is shady—but the Black Hood business has actually served to add some menace to the show. His motives are very questionable, though, and by that, I mean his choice of targets. There are actual criminals in the area, after all. So what’s he really after?