Riverdale S01E06 Review: Faster, Pussycats! Kill! Kill! – This episode has everything! (Except Cheryl)

This week on Riverdale, we finally get to hear Polly’s side of the story. Also, there’s a variety show at the high school. Never underestimate the ability of CW show writers to come up with a new reason for most of the cast to get together each week.

Before we get to the most interesting part of the episode, first the show must go on. Everyone has to audition for a slot in the show and it’s Archie’s time to shine. And he chokes. Veronica convinces Kevin, who’s running this thing, to let Archie have a slot anyway, but it’s not going to be any easier to perform for an auditorium full of people. So he’s going to have to work on that. Thankfully, Valerie’s there to work with him, to Josie’s consternation. Apparently, you can be a Pussycat and NOTHING ELSE. After Josie issues this ultimatum, Valerie leaves the cat-tatorship. 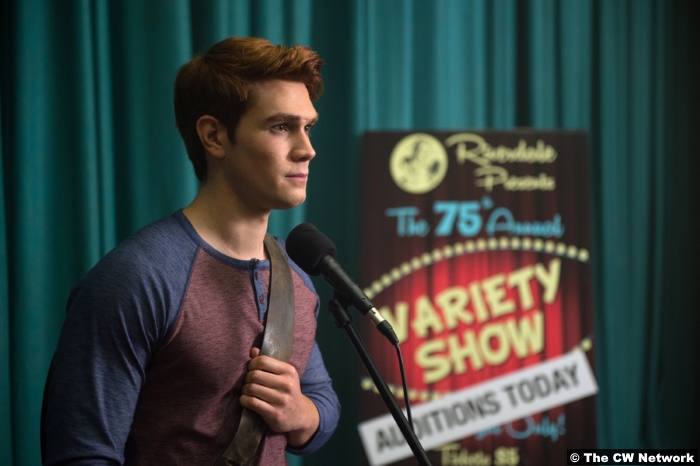 Her former ears don’t get a chance to get cold, though, as Veronica snatches them up. She’s now furious at Archie (whom she was going to back up) because she saw Hermione and Fred kissing. I hear you asking, But what does that have to do with Archie? and all I can say is “teenagers.” Hermione and Fred were having a moment at Andrews Construction after Hermione informed him that he’s only got enough money left to pay his guys another month at best. Fred wants the job at the drive-in, but it’s got to be improved by that mysterious buyer and he doesn’t know who it is. We, of course, know that it’s Hiram Lodge but since Fred doesn’t know that, he pitches a dinner with Mayor McCoy to sweet talk her into putting in the good word for him. The dinner, which we’ll get to in a moment, is meaningless for the business plan, obviously. It’s the Lodges who hold the key to it and more specifically, Veronica, since Hiram made her an officer of the company. A) Can a minor do that? B) With the kind of guy that he is, I’m pretty sure that’s French for “fall guy.” Veronica agrees to sign the deal with Andrews Construction only if her mom promises to keep it just friendly with Fred, but her mom rightly points out that that’s unfair. So she refuses and Hermione waits two seconds after Veronica leaves to forge her signature. Deal on!

Now rewind back to dinner. Hermione volunteers to have the dinner at her place, so the guests are her, Archie, and the McCoys—the mayor, her husband (a traveling jazz musician), and Josie. It is here that it suddenly hit me that Archie Andrews is the dumbest kid alive. Like, there’s been signs but I shrugged them off, just like I did when he was like, “Great news—Valerie left the Pussycats” AND when he didn’t understand Veronica’s anger over their parents because his mom left and her dad is “incarcerated,” because again, teenagers. However, when he says that he never knew that Josie’s real name was Josephine…cut to me looking at the camera like I’m on The Office. Of course he could have meant that he didn’t know that Josie was actually a nickname, but can you prove that? Lord, help my time. THEN. When Josie’s dad mentions that she was named for Josephine Baker and correctly surmises that Archie has no clue who that was, that’s not that surprising. But later Fred makes a reference to Bob Dylan going electric at the Newport Folk Festival. And singer/songwriter wannabe Archie Andrews says, “I’m not sure who that is.” AHHHHHHHHHH (that’s me yelling).  I guess I just got a glimpse at what it’s going to be like when my hover-grandchildren tell me they’ve never heard of Bob Dylan. Then again, maybe I shouldn’t be that surprised because I’ve heard his music. It does not sound like it comes from someone whose inspirations reach any further than Spotify’s Teen Party playlist.

Also, and this may be redundant, it doesn’t sound like it comes from someone who’s that deep. I’m beginning to understand the Grundy relationship/subsequent manipulation so much more. 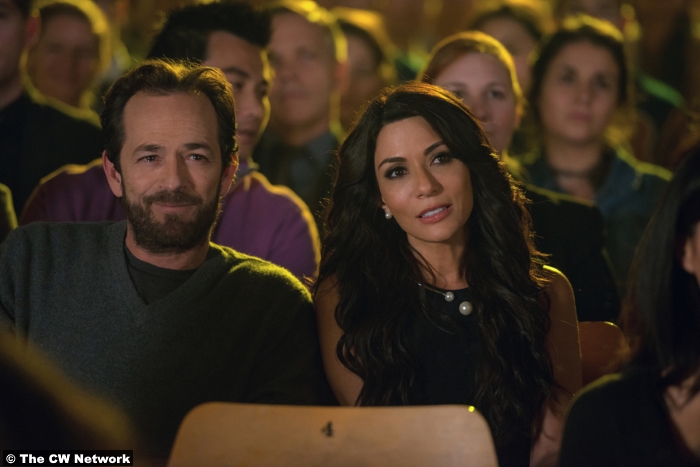 Sweet dummy Archie does get up the courage to perform solo, by the way. He just focuses on his dad, the same poor man who has to realize his son’s never heard of Bob Dylan, and he gets the courage and becomes a real boy and so forth. Valerie is welcomed back into the Pussycat fold, which still includes Veronica. Poor Josie, though, is brought to tears when her jazz snob dad walks out during their Donna Summer cover. Now we know why the Pussycats aren’t a cat-tocracy.. Can other parents on this show be decent outside of Fred and Sheriff Keller, please?

Don’t be looking to the Coopers for that, obviously. Our favorite detective duo, Betty and Jughead, track Polly to a home for troubled youth. It might as well be called The Sisters of Quiet Mercy Home for Knocked Up Girls, because it’s obvious as hell that’s what we’re going to find. According to Polly, the Blossoms made Jason break up with Polly but when he found out Polly was pregnant, they made plans to run away together. Then the men in white came for her and you know what happened to Jason. Polly didn’t go nuts and she wasn’t into drugs or drinking. Meanwhile, the Coopers have been telling her that Betty doesn’t want to visit, but not that Jason went to THE deluxe apartment in the sky.

Betty confronts her parents with what she’s learned, but unsurprisingly they dismiss it all as Polly’s delusions. She tries to ask the real questions like did Daddy steal the murder wall? We know he did, so it’s fun watching him never actually deny it. There’s just a lot of “How could you ask that?” She edges closer to accusing him of murdering Jason and Alice loses it. She laughs that she wishes Hal had the stomach for that and hand to God, I thought she was going to say “stones.” I don’t know if he has the stomach or stones for that, but ya girl Alice sure does. 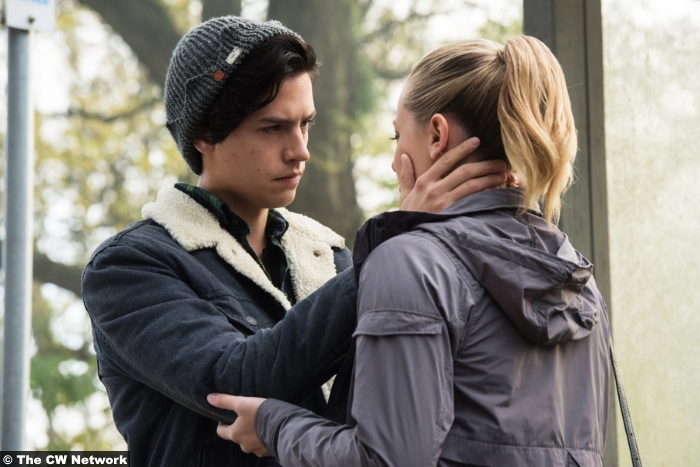 Jughead and Betty kiss, but like Betty, I’m gonna steamroll that moment to get to her epiphany. If Jason were hiding a car for their getaway, then it should still be there. And it is! Right past a sign for Blossom Maple Farm, just in case you were worried there would be no inexplicable maple-ry this week. Jason’s stuff is still in the back, along with a cache of drugs. And speaking of inexplicable, Jughead and Betty, who are clearly being watched, text Sheriff Keller at the variety show and then go talk to him in person. What a surprise that when the Sheriff and deputy return to the car, it is ablaze. Honestly, over here at Wolf Hall, we were actually surprised that it wasn’t missing. Actually missing, though? It’s Polly, who’s gone out the literally bloody window at Our Lady of Perpetual Sorrows Like Your Baby Daddy Being Murdered.

9.5/10 – This episode has everything: maple syrup, intrigue, Alice Cooper saying “Jughead,” and the realization that Archie is about as sharp as a sack of wet mice. I’m going to dock a point for putting his music in my earholes again, but overall, this is Riverdale at its soapiest fun best. Hope the Blossoms didn’t really send Cheryl (missing this week) to European boarding school!