The Boxer is a song about being conned

Their music spoke to and for a generation, which is the kind of thing not often said today, in an era of carefully produced, cultivated, and curated “big brand” record companies. In an era where radio stations in Peoria play the music that’s prescribed by a bunch of suits in New York, it’s hard for someone or some group of someones to break through with something new, radical, or era-defining. Don’t misunderstand, there are still artists who can rightly claim the label “voice of a generation.” Kanye has a pretty good argument for the present day (and he’ll make those arguments in interviews, too). That being said, it’s a rare thing to find someone that people largely agree is the voice of their generation. The amazing thing about music in the 1960s is that the decade produced multiple artists who could claim the title and fans of the decade’s music would agree with all of them. The Beatles? They certainly fit the bill. They represent the top of the popular music trends of the decade. Jimi Hendrix? Sure. He was music’s counter-culture philosophy, personified. Bob Dylan? Absolutely. He was the decade’s prophet on the street corner, decrying society’s woes and waxing philosophic about the events of the day.

Simon and Garfunkel? They were the poet laureates of the 1960s. 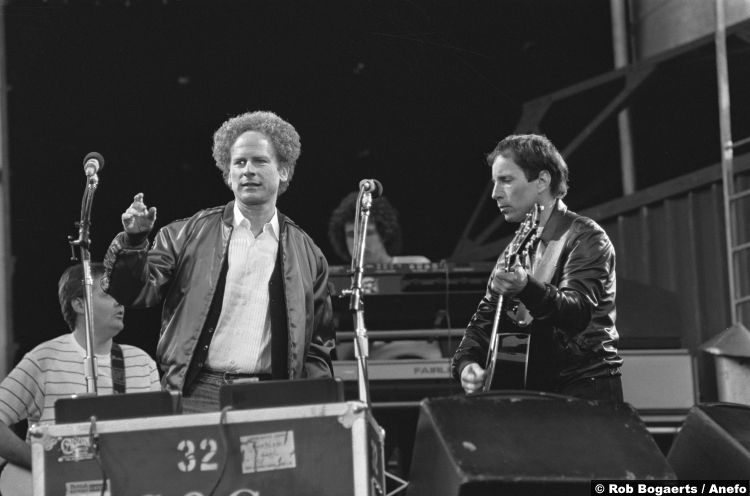 While there are a lot of musicians that were equally excellent songwriters, there are few whose lyrics were good enough to be read and contemplated on their own, without any accompaniment. Even with The Beatles—who had some marvelously written tracks (For No One is a masterpiece poem about a broken relationship)—most of their songs started out first with music and then the words were added in later to fit around the tune. The most covered song in their arsenal, Yesterday, started as a pretty little melody that Paul played on his guitar before the lyrics were ever plugged in beside the music. Knowing that almost diminishes the lyrics.

Not so with Simon and Garfunkel, whose lyrics stand on their own as excellent works of poetry and prose. The fact that they chose to present their written works through beautiful harmony and musical arrangements, both stripped down and sweeping, is a testament to their all-around talent. Make no mistake, though, to read a Simon and Garfunkel song is just as thought-provoking as it is to listen to one, and The Boxer is perhaps their most underrated composition.

Granted, The Boxer is rightly regarded as one of the duo’s best songs. It’s beyond famous, instantly recognizable in its opening notes, and has a chorus everyone loves to sing along with. The lyrics are the hidden gem, however, as they are often dismissed as a little nonsense story that doesn’t mean much and only serves to get us to the fun “ly la-ly” chorus. However, if you take a closer look at the song, you might just realize how deceptive those lyrics are, and I use the word “deceptive,” quite intentionally.

The Boxer is a song about being conned.

Specifically, The Boxer is a song about you, the listener, being conned by the singer. Here are the lyrics…

Right off the bat (verses 1 and 2), we’re taken into the world of the song through the personal pronoun, the very first word in the song: “I.” You’re listening to someone tell the story, and it’s not Paul Simon or Art Garfunkel. They are merely taking on the role of the one singing, and the one singing is a beggar on the street, panhandling for money. To lure you in and hopefully draw some money from your pocket, he tells you the sad story of his life.

The beggar grew up poor, with a life story that he seldom tells, about leaving home as a boy, and finding his way to the poorer quarters of New York City, where the ragged people go. He had aspirations and dreams, lofty goals as all young men do when they set out from home. He could have settled down to a mundane life, but he resisted. He wanted to be a champion boxer, you see. He would fight in the alleys, fight in the local leagues, and planned to climb the ladder to challenge the guys at the top. That was his dream, and with every headwind, every obstacle, every taste of defeat, he persisted and resisted the urge to give up.

Now, after a failure to make anything of himself, the beggar has squandered that resistance, trading in the last of it for “a pocketful of mumbles,” which is what he’s doing now: He’s mumbling his story, hoping the listener—that’s you—will take pity on him and maybe give him a little bit of money so he can eat.

The chorus interrupts the beggar’s story, explicitly telling you not to trust this man. His words are lies, don’t believe him. But you don’t listen. A man hears what he wants to hear and disregards the rest. You want to believe his sad story, so he continues to verses 3 and 4.

He’s trying to work, trying to live, but he has no offers. He eats when he can, sleeps where he can, tries and struggles to get by, but–

“It’s a lie,” the chorus quietly interrupts, faintly at first, but then a soft instrumental plays, swaying you, lulling you, drawing you in, before the chorus cuts in more forcefully with the slam of a drum: “Lie! Don’t believe him. Don’t fall for it.”

Verse 5 is the beggar’s big finish. He wants to go home, he says. He wishes he was gone already, as the New York City winters chill, crack, and draw blood from his unsheltered skin. You can see it on his face; clearly, he’s been bleeding. It draws pity from you. He wants to go home, and he just needs a little bit of ($$$) help to do it…

And you buy it…quite literally.

You give the beggar what you can; you hand him the money and walk away satisfied that you helped. But whom did you help, really? What did the beggar want, really? Did he really want to go home? No. But before you think he was just going to spend his newly acquired money on booze or women or some other frivolous thing, the song’s perspective shifts from the first person to the third and the musical arrangement becomes more lively (signaling the shift in perspective).

The final verse is a coda, telling us what became of the beggar.

The beggar is a boxer and a fighter by his trade. His dream is not dead; his resistance is not squandered. He continues to fight, no matter how many times he loses (he carries the reminders of every glove that laid him down). Like any boxer that’s been hit too many times, his words are mere mumbles, but he does not quit. He gets laid down and cut open (you saw the wounds on his face before you gave him your money). He loses over and over until he cries out, angry at his loss and ashamed of his failures: “I am leaving!”

But he can’t leave. He can’t let go of his dream. The fighter still remains. He’s still fighting when he can in dingy, dirty, smoke-filled gyms, betting on himself and losing every time. And every time he loses he cries out all over again “I am leaving, I am leaving!”

The chorus returns one last time, but now the shouts of “lie, lie, lie” have become a taunt, teasing the fighter who says he will quit, who says he will leave, who says his every defeat is his last…when the reality is he can’t quit. The words are lies. He returns to the streets, to beg for money.

To us he is “the beggar,” but in his mind, he is “the boxer,” focused only on collecting enough money to survive so he can continue dreaming, and to con whoever will listen to his story out of whatever he can get, just to keep that dream alive.

Even if the dream is, itself, a lie.