In August we started a mini-series of articles looking at comic book heroes/teams with the best rogues galleries. If you’re not familiar with the term, a rogues gallery is the litany of villains that a hero contends with regularly. While it’s not uncommon for superheroes to encounter and spar with someone else’s baddie (Batman has tussled with Lex Luthor before, and DareDevil and Spider-Man share a loathing of Kingpin), everybody has a list that is theirs.

Everyone has favorites too, but these are mine.

Up first, we looked at Superman, the most well-known superhero of them all, yet one whose rogues have not been explored as much as the other DC superstar. Last month we turned our attention to Marvel, and to one of comics’ best-selling brands, the X-Men, whose heroes and villains have been a staple in cartoons and cinemas as much as they have been in comics. Continuing in the Marvel universe, we have…

The “First Family” of comics has had rough luck when it comes to TV and cinematic translations. Admittedly, it’s a tough nut to crack, getting the tone of the team right. The Fantastic Four franchise is, at its best, an amazing blend of science-fiction, fantasy, family drama, and superhero escapism. There’s an “emotion on sleeve” sincerity and earnestness to it that forces writers to carefully walk the tightrope between silly and serious, between epic moments and cornball fun. While that mishmash of styles has resulted in some lackluster films, it’s also provided comic books with a tremendous variety of rogues for the team to contend with over the years.

Here are my five favorites: 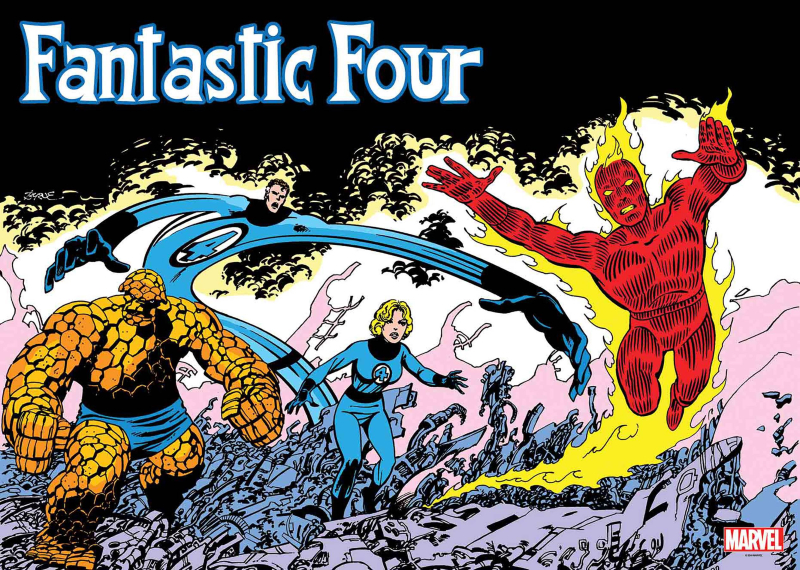 The “Ultimate” line of Marvel Comics launched a little over 20 years ago, resetting the board and offering new readers a fresh start to enjoy their favorite heroes, without the baggage of decades+ of continuity. Among the first wave of comics was “Ultimate Fantastic Four,” bringing a younger version of the team than what long-time fans were used to seeing. It didn’t take long for more deviations from the norm to become apparent, either. Instead of marrying, Ultimate Reed and Sue split. Instead of being “Family first,” the Ultimate F4 disbanded. Instead of using his intellect up until the point when a disaster humbles him and snaps him back to reality, Ultimate Reed literally stretches the size of his cranium so that he can have more room to hold his literal-inflated brain. Slowly he loses his sense of self, twisting himself into a maniacal villain known as The Maker, a major player in the lead-up to Johnathan Hickman’s Secret Wars saga from a decade or so ago. Reed’s Maker is, in a lot of ways, the perfect F4 foil. He possesses all the intellect and personal connection needed to be a challenge to the team, has a tragic backstory that makes you pity him as much as loathe him, and serves as a walking parable for the heroes to learn: The Maker is what happens when someone as brilliant and driven as Reed doesn’t have his head counter-balanced by Sue’s heart. 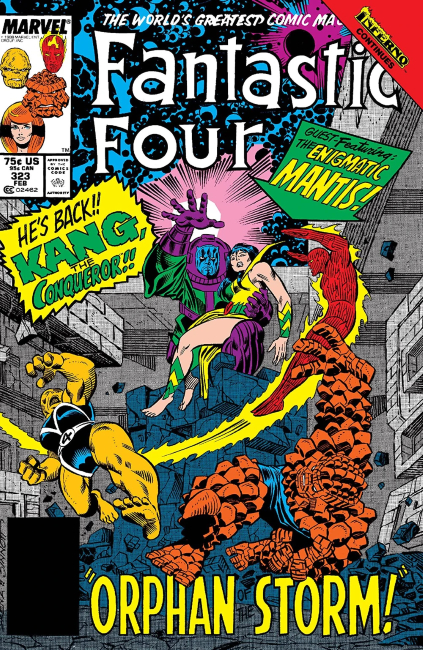 The big purple and green menace to time and space has been tantalizingly teased for MCU fans in the first season finale of Loki. He’s set to make a bigger appearance in next year’s ANT-MAN & THE WASP IN QUANTUMANIA film before the whole Avengers take him on in 2025’s THE KANG DYNASTY. Make no mistake, however, Kang is very much a Fantastic Four foil. He’s like DC’s Darkseid, in that he’s a big enough danger for the team (Justice League) to fight, but at the end of the day, he belongs to Superman’s rogue’s gallery. Kang is from the future and is a distant (distant) descendant of Reed Richards and, delightfully, Dr. Doom. Yes, both scientists, the hero and the villain, mortal enemies, have descendants that, at some point in time, will hook up and create the line that will produce Nathaniel Richards, a brilliant scientist that manipulates time to rewrite history so that he becomes the ruler over all. While Thanos used brute force to steal infinity gems, Kang uses cunning intellect to procure ultimate power. He’s a Reed Richards villain all over and one whose stories are always a blast to read. 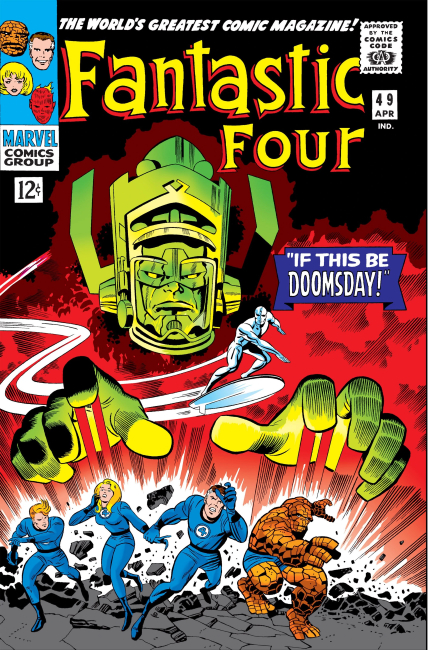 He is the “Eater of Worlds,” how cool of a nickname is that? Galactus is a giant, ancient being, whose existence predates all known history. He moves from world to world, devouring them the way we do late-night dinner at Taco Bell, sustaining his massive body’s vast needs with the life force of planets. He’s a villain so massive (in more ways than one) it’s almost unfathomable to wrap the mind around dealing with him, much less “defeating” him. Indeed, most of the time Galactus is not defeated, merely appeased and distracted long enough to move on. It’s not Reed and the gang’s power that vanquishes the danger of Galactus, but Reed’s skillful strategizing. The big G is the ultimate, ultimate, cosmic villain, almost a chaotic neutral in how indiscriminate he is about what he does. He’s been attempted on screen before, in the form of…a cloud. But one day the MCU will give us the true, full spectacle in all his glory, and I will probably weep tears of joy. 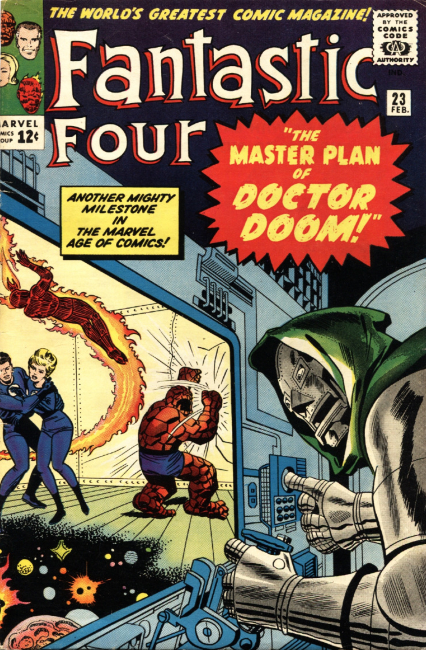 Doom is the F4’s Joker. He’s their Lex Luthor. He’s their Green Goblin, their Kingpin, their Red Skull. If you have only one villain you want to see the hero fight, it’s this one. Doom is that one. The best thing about Doom is how supremely and completely he embodies this gif:

Doom is Reed’s equal in some areas, his inferior in some areas, and his superior in some areas. It’s that third category that he focuses on, though. He’s as capable a wizard as Dr. Strange. He’s as inventive a technical craftsman as Tony Stark. He’s as fiercely protective of his country as Black Panther. And he’s as freakishly brilliant as Reed Richards. He’s a villain like most others in that he wants to rule the world, but unlike most others he considers it beneath him to slink about in the shadows, operating like a criminal. Doom does not see himself as a criminal. Doom simply recognizes he’s the only man smart enough and powerful enough and with a will unyielding enough to do the job of ruling. He carries a sense of obligation on his shoulders, lamenting the burden that comes with being a tyrant, which makes him SO insufferable as a human being. He talks about himself in the third person, lives in a castle, and wears a cape (not many in the Marvel universe wear capes). He’s amazing. MCU fans who don’t follow the comics have no idea what kind of awesomeness they’re in for with a fully-realized Dr. Victor Von Doom.

And yet, he’s not number one. He’s not THE best villain of the Fantastic Four. That honor belongs to… 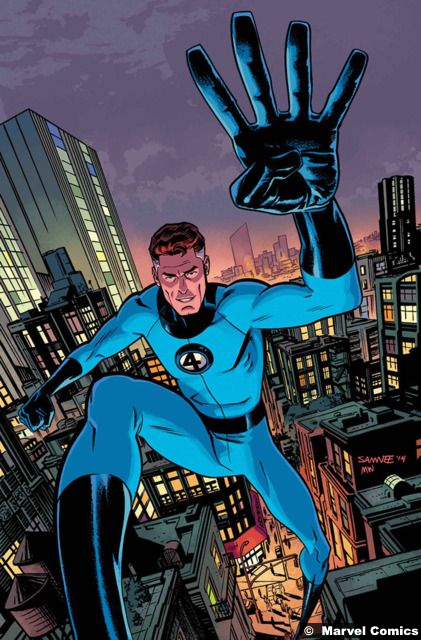 Perhaps you’ve noticed how much these villains are tremendous foils, not to Sue or Johnny or Ben, but to Reed in particular. The fact is, while the team is a team, Reed is the frontman. He’s the star. That has its perks but also its tragic downsides: You could devote a whole article to “Reed Richards’ brilliance” and how it is not only the reason the heroes frequently get out of their many pickles, but also get into them in the first place. Reed Richards’ hubris is probably the greatest villain in all of Marvel comics and it’s something none of the half-baked F4 movies we’ve gotten so far have understood. Even with Sue, Ben, and Johnny anchoring him, Reed’s boundless mind often causes him to leap before he looks, pushing the limits of the universe itself just because he woke up with a mild bit of inspiration.

Reed’s the kind of hero who can build a machine that can literally stop time itself and then, after building it, decide it’s too dangerous, so he builds an even more crazy machine to eat that first machine, which then becomes sentient and tries to destroy the fabric of reality, forcing him to create a third machine to shrink the evil robot down to the size of a jelly bean which Ben then stomps with his heel. That’s a typical Fantastic Four comic book I just summarized. That’s what ordinarily happens. How can you hate the Fantastic Four?!

Full disclosure: Fantastic Four is my favorite Marvel property (DareDevil is a close second) so it was very hard to narrow this list down to just five rogues. I didn’t even mention Mole Man! The MCU is in for a treat now that fans of the comics actually have the rights to make movies based on these amazing characters.

We’ll be back next month with the second-to-last installment in this mini-series. Which hero has the best rogues? Will it be Batman or Spider-Man?