This week, Riverdale tries a new form of storytelling and Black Hood gives the town residents an ultimatum. Only one of these succeeds.

Black Hood orders the townspeople to abstain from sinning for 48 hours, if they can. It’s obviously a losing game, because number one, everyone’s a sinner, according to what I had yelled at me as a child over a tank of writhing snakes. (I’m kidding–that didn’t happen to me. That happened to my classmates.)  And number two, he’s exactly the kind of control freak to move the goalposts on what counts as a sin. Like, did you enjoy that coffee cake your boss brought in for everyone? Congratulations, that’s gluttony. Sinner. 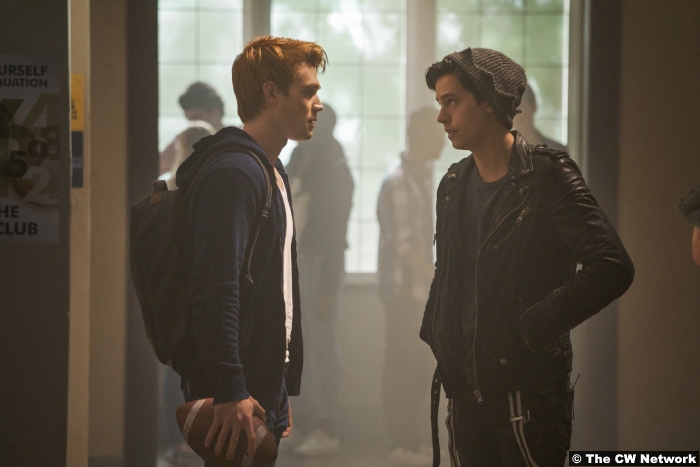 Anyway, might as well start sinnin’. And maybe snake-handling’s on my mind because we have a return of Penny the “Snake Handler,” who’s come to collect on that favor from Jug. She wants him to pick up a crate on the Southside (MYSTERIOUS!) and deliver it to Greendale (WITCHY!). Somehow, with all the excitement, I missed it at first, but the crate is marked as property of Miskatonic University (LOVECRAFTIAN!).

And here we start our new storytelling form, in which each plot tonight is presented as a vignette. They’re not specifically separate, as they interact in each other’s stories, but each separate vignette has its own tone. First up is Archie and Jughead in a little action that starts out Texas Chainsaw and then goes sideways into Creepshow.

Jughead gets Archie to help, since he can’t transport the crate without Fred’s truck, and unsurprisingly, their trip isn’t without bumps. First of all, they blow a tire, so Archie has to stay with the truck and wait for help. Jughead gets a ride with one Farmer McGinty, who’s already acting suspicious enough that it doesn’t help that he’s played by Tony Todd, aka the Candyman.

While Jughead rides to Greendale and gets an earful about the path of the righteous, Archie mostly stands around on the side of the road. He does see a spooky blood-spattered doe cross the road, though. Meanwhile, back in the truck, McGinty tells Jughead that this is not the first time a killer has stalked the residents of Riverdale. There was once a Riverdale Reaper and for McGinty’s money–IF GAMBLING WEREN’T A SIN–the Reaper and the Hood are probably one and the same. 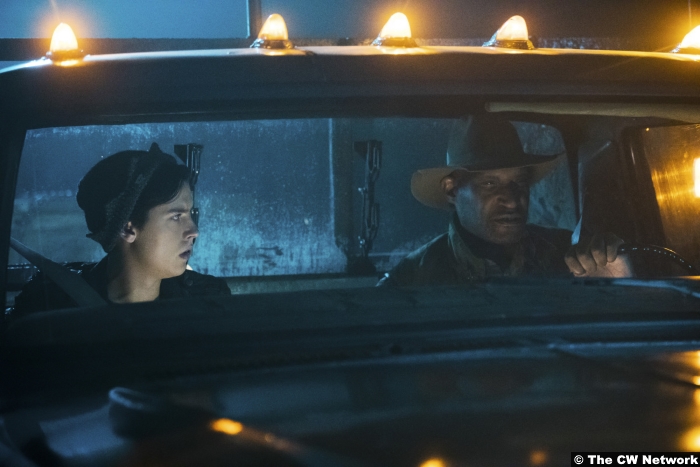 Jughead gets the crate to its destination, which is where he finds out that he’s meant to be the regular delivery boy for these…unsettling folks in Greendale. Penny manipulated him into doing this one favor by lying that FP had been attacked in jail. Now she makes it clear that Jughead is going to work for her until FP’s mysterious debt with her is settled. Jug is drowning and he desperately needs help. Meanwhile, his ostensible best friend is over in the corner like, “There’s really no way to know how many chameleons are in a room at any given time.” Poor Juggie.

Next up is Josie’s story. Her new BFF–just ask her–Cheryl claims that she’s spirited a recording of the Pussycats to contacts at a recording studio and they’re interested in Josie and Josie alone. So, despite the friction it causes with Melody and Val, Josie diligently works at polishing up a cover of “Spooky.” And speaking of spooky, this segment really leans into making you suspect Riverdale High’s janitor is up to no good. There he is, spying on Josie. There he is, coming to her rescue. Why does she need someone to come to her rescue? She’s getting strange messages in her locker and elsewhere that culminate in a creepy sketch of her and a boxed pig’s heart. (What to get for the girl who has everything.) Since it’s obviously not the janitor because he’s too obvious, it must be the returned Chuck. After all, he has a past history of being awful to girls, so the “if I can’t have you, no one can” dramatics wouldn’t seem a reach for him. Nevermind that he respects Josie’s choice when she turns him down for a date and that they have a sweet moment anyway, dancing at Pop’s. (Meanwhile, I slink into frame, stealing their delicious-looking milkshakes. Sorry–I watched this episode while eating a sensible grilled salmon fillet and cauliflower rice.)

But of course, it’s not Chuck. It’s Cheryl, who in her own demented way, is orchestrating pure terror in Josie’s life* as a way of repaying her for saving Cheryl from Nick St. Clair. Cheryl’s like a toddler who can kill you. 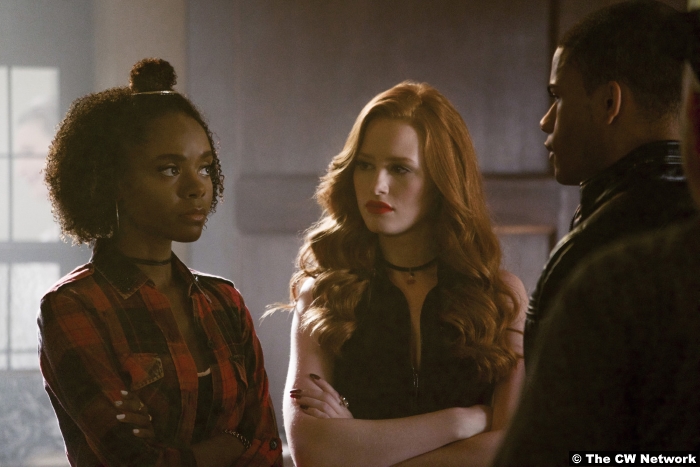 *That dream Josie has about the Black Hood slitting her throat was horrifying.

Our final story is Betty and Veronica. Having obviously the online discussions, Betty decides that she’s #TeamSheriffKeller as far as Black Hood guesses go. So she sets out to prove it, which just makes life very awkward for her and Veronica and Hal and Sheriff Keller. Related: Where’s Alice?! She gets Veronica to help spy, which leads to a mondo uncomfortable conversation between Veronica and a shirtless Sheriff Keller in his basement. We do learn, though, that Mrs. Keller is apparently alive, contrary to popular assumption, and stationed overseas.

Since Veronica doesn’t turn up anything, Betty just goes ahead and breaks into the Kellers’ home, where Sheriff Keller finds her. Then he and Betty and Hal have a little come-to-Jesus meeting in which he assures them that his logbook will prove he was nowhere near any of the Black Hood sites. That sounds fake, but okay. I mean, he wrote that logbook.

Betty and her little determined face are still not satisfied, so she again ropes Ronnie into spying on Keller with her. As it turns out, he’s (probably) not the Black Hood. The subterfuge**, the late night sneak-outs, the caginess–they’re all because Sheriff Keller is having an affair. With Mayor McCoy! Ma’am!

**You know, maybe Sheriff Keller keeps so many locked doors in his house because people break in. And steal things, Hal!

And so ends our vignettes, but not the episode itself. Rather predictably, the Black Hood has decided that none of them are without sin. He passes on this message through poor Pop, who does not deserve this***, that the day of reckoning is coming.

***Or maybe he does. If there’s one thing we can rely on, it’s that we can’t rely on what we think we know about the adults of Riverdale.

9/10 – Putting its characters into their own little movies was a great idea, allowing the show to experiment with tone and genre. As for the story itself, it’s clear that Black Hood is pushing the town’s residents toward something–this day of reckoning–but what shape that will take is still misty and a little scary. And speaking of scary, Cheryl. Why does my girl Cheryl get a second chance when Chuck doesn’t? I’m not particularly invested in him or his struggles; it’s just funny to me.