Doctor Who 2022 October Special Review: The Power of the Doctor – Lackluster

A Season 13 finale of the Doctor Who television series aired a few days back, and formulating an opinion about The Power of the Doctor is as messy as the episode itself. So, after a short gestation period mulling over this episode and the entirety of Jodie Whittaker’s run, it’s time to wrap up Chris Chibnall’s tenure as the showrunner of an era that didn’t fully utilize the expansive acting talents of its lead and cast.

Admittedly, Chibnall’s helming of the series wasn’t actually as bad as some episodes of Old Who. Sure, the messy narratives often darkened the brilliance of his ideas, but there were some concepts that the fans deemed worthwhile, like the Doctor gaining access to their deleted memories and choosing not to “read” them and the introduction of the Timeless Children arc, to the glee and bemoaning of some of the fans.

But that came to an end, and the loose ends left by Chibnall are now Russell T Davies’ problem and something he’ll have to deal with or completely just avoid.

In fact, the whole 90-minute runtime of the episode feels just like the backstage room of a studio in which creatives are flinging ideas for the next episode of a mid-budget sitcom they’re currently working on. We have tons of cameos, story threads, and scenes that all try to fit into and serve the narrative of the episode that took its antagonist nearly 45 minutes to uncover. The idea itself wasn’t poorly conceptualized as much as it was poorly executed.

The Power of the Doctor opens up with an intergalactic train under attack by the Cybermen and the Doctor’s attempt to stop them from executing their nefarious plan. Of course, team TARDIS clashes with the Cybermen, amidst which Dan nearly loses his life. The Cybermen got what they came for and fled the scene with a massive energy source that could power entire worlds. Distressed by the near loss of his life, Dan exits the TARDIS and says his farewell, bringing his short companionship to an abrupt ending in a scene that’s almost entirely devoid of any emotional significance. 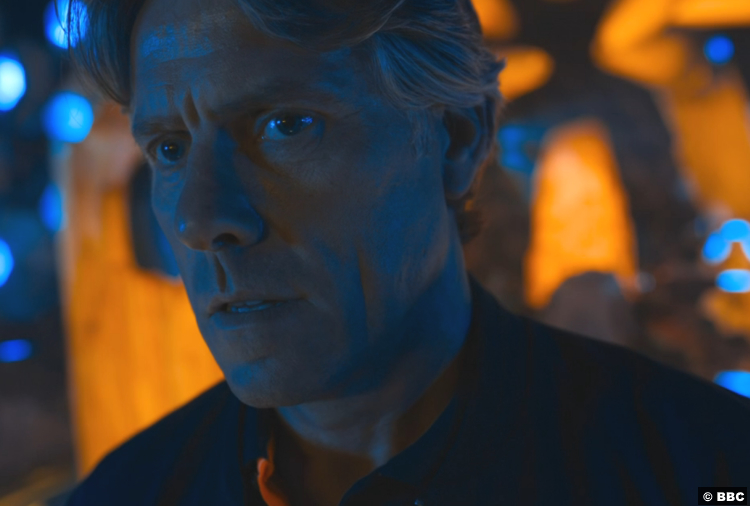 In the meantime, the Doctor chases intel provided by a rogue Dalek, while Tegan Jovanka and Ace — the companions of previous incarnations of the Doctor, chase missing paintings and seismologists. Simultaneously, back in 1916, the Master posed as Grigori Rasputin, which ultimately only served to introduce him to the narrative and nothing else. The entire 1916 Russian backdrop and its royal family play no significance in the episode’s overall plot. 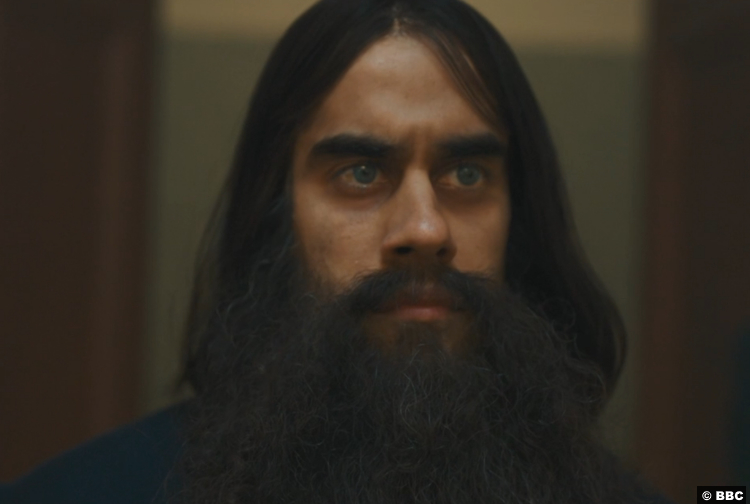 So, for the first part of The Power of the Doctor, things are as incoherent as what The Flux specials gave us. Fast forward to the latter half, and the Doctor is trapped by the Daleks and delivered to the Master, who finally makes some sense of the mess we all previously witnessed.

Apparently, he counted on the Daleks and Cybermen’s hatred towards the Doctor to unify the two warring alien species to ultimately serve his goal — the final destruction of the Doctor. While the Daleks have captured and delivered the Doctor to the Master, Cybermen have provided the necessary technology and energy source to allow the Doctor’s arch-nemesis to exact the cruelest punishment Time Lords know of — a forced regeneration. 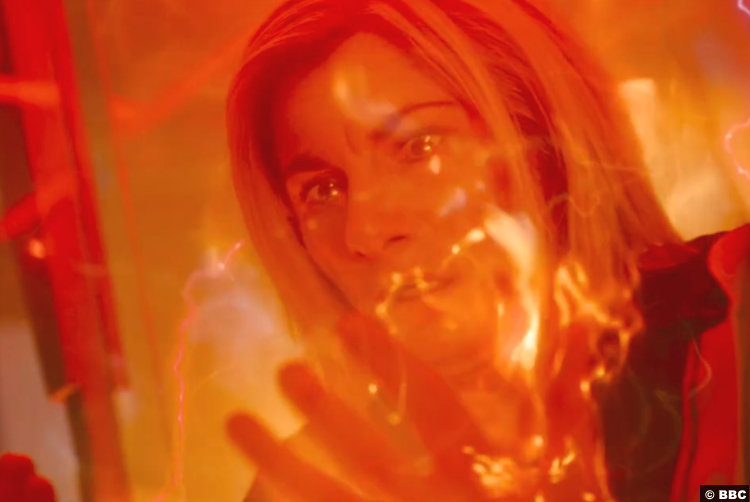 The Master succeeds in his plans and forces the Doctor to regenerate into the Master, only so that the latter can tarnish the name of the former. Now there’s an evil plot that would undo the universe. Simultaneously, perhaps more sinister plans are taking place, as the Cybermen are taking down UNIT and Earth’s defenses, and the Daleks are causing seismic activities to trigger the Earth’s volcanoes and douse the surface in lava.

Compared to the reputational tarnishing, dousing the Earth’s surface in lava is a much more sinister part of the Master’s plan — and also the one that oddly resembles Project Vulcan from Austin Powers: The International Man of Mystery. With the Doctor now seemingly gone, it’s up to Yaz, the Doctor’s holo AI, and a group of the Doctor’s former companions to save the day. And this is perhaps one of the highlights of the episode.

If we neglect the emotional reconciliation individual companions had with the Doctor’s AI, since the real Doctor was otherwise engaged (destroyed), it’s really interesting seeing all these companions in action. There’s no stopping to inspect, admire, or fear the peculiarities of the situation. Ace and Graham bump into each other while confronting Daleks, and after a very brief introduction, they are immediately back on their mission of saving Earth. It only goes to prove how accustomed they are to the Doctor’s adventures.

The companions eventually stop the Daleks, and thanks to the regeneration abilities’ decreased stability in the initial post-regeneration hours, they’re also forced the Master Doctor to regenerate into her former self. They eventually defeat the Doctor’s arch-nemesis, prevent the Cybermen and Daleks’ invasion of the dying Earth, and stop Earth’s destruction. But not before the Master manages to deal the final blow to the Doctor, which pushes her to the limits of her being, and triggers a regeneration process. 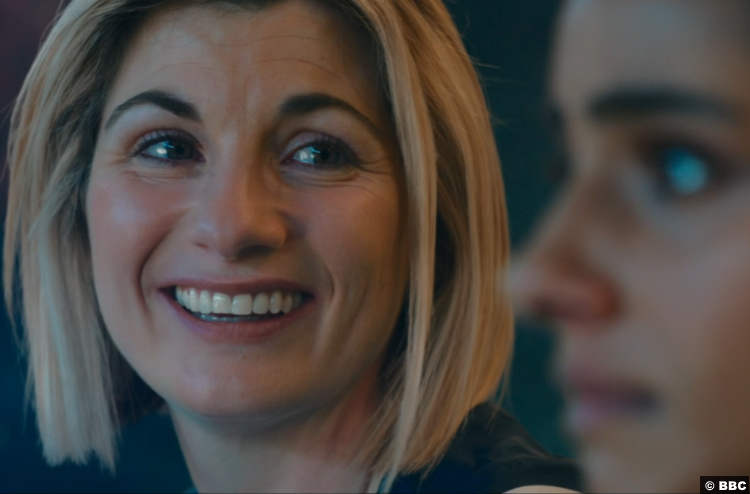 In the moments leading towards her regeneration, the Doctor and Yaz are sitting on top of the TARDIS, looking upon Earth from orbit and chatting about how fantastic their adventures were. They depart, and Yaz bumps into Dan and Graham, who had started a companions’ support group — something akin to AA, but for people who lived through extraordinary adventures and aren’t able to express their experience to anyone but themselves. Imagine the amount of catching up that group has to look forward to.

In the meantime, the Doctor’s regeneration catches up to her, and with a golden light and “Tag, you’re it” line, she regenerates into the Doctor we all hoped for. It would seem that the Doctor can regenerate into a previous regeneration. 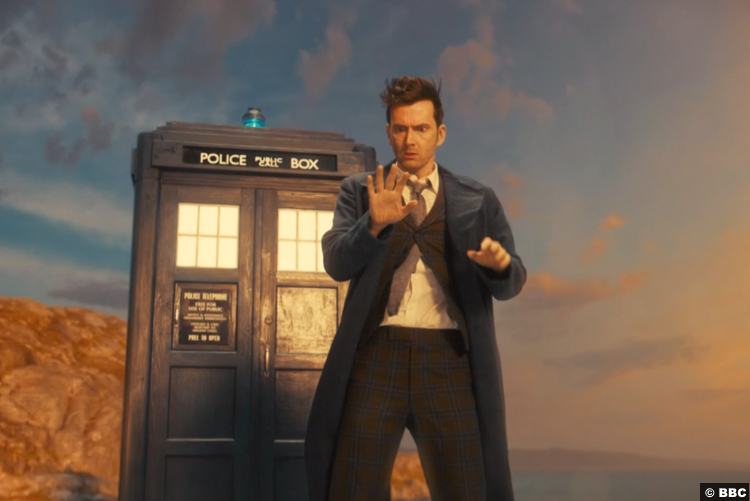 6.5/10 — Legend of the Sea Devils left us with a pretty bland aftertaste, which is washed down by a slightly better The Power of the Doctor. Unfortunately, the overall narrative isn’t concocted in the most cohesive or interesting of manners, and all the ingredients of what could’ve been a fine cocktail hadn’t blended very well, as the episode tried to cramp too much content into its runtime. However, the narrative was packed with Whovian-type action, plenty of callbacks, previous companions, and a previous incarnation — all the right stuff that helps slightly redeem this lackluster regeneration story.