A new film just dropped on Netflix, which is like saying a new person has just been born. It happens a lot. This one caught my eye, however, in that it reminded me of a great movie I watched many years ago (also on Netflix). The film that just released is called TROLL. It’s a Norwegian production that presents a “what if” scenario: What if a troll of folklore and fairy tales existed and was awakened from his slumber, in the mountains of Norway, by industrial diggers and drillers. 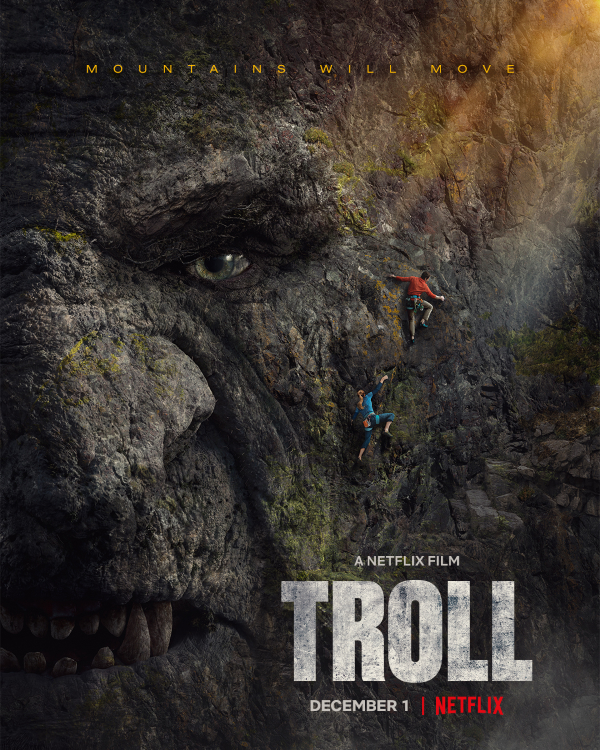 This is Norway’s Godzilla.

I wouldn’t be let down a bit if we got a new Troll-based movie every few years. I don’t need a big, interconnected universe, just a different Norwegian filmmaker putting his stamp on the “what if trolls…but today?!” premise. Let your imagination run wild with different creature designs, different aspects of the lore to play with, and different genres to explore. In this movie, the comparisons to the classic Japanese film series are front and center: The creature is ancient and stirred to life as a result of external factors which serves as a cautionary tale to the audience. In the case of Godzilla, it was nuclear weapons; in the case of TROLL, it is the desecration of the natural environment. Both this movie and several Godzilla films (including my personal favorite, Shin Godzilla) focus on the government’s response to the threat and, true to type, the government here is as ineffective and paralyzed by bureaucratic inanity as in Shin Godzilla. Although the comparisons are sharply bisected at that point as Shin Godzilla was a very believable movie and TROLL is not. More on that in a sec.

Was I supposed to sympathize with the troll? Because I absolutely did.

The humans are the real villain of this story, and the troll in question deserves all our pity and support. It’s not uncommon in monster movies like this, when the “villain” is a glorified animal, for audiences to feel bad as the big bad creature is disposed of. An animal is just an animal and doesn’t act with malice or motive. There’s more to it here, however.

The plot revolves around this troll being the fabled “Mountain King,” (cross-reference with the 1875 classical piece by composer Edvard Grieg) who, in this story, was driven from his home by human invaders. His family was murdered and he was led deep into a mountain to starve and—presumably—die. So this monster I’m supposed to want to see be exterminated—the last of his kind, mind you—is a dad whose family was massacred so that the butchers that did it could build a kingdom on the ashes of his former home? It was hard to root my fellow humans…but maybe that’s the point, what with the environmental subtext and all.

TROLLHUNTER did it better.

Troll spends a lot of its b-plot time focusing on the advisors that surround Norway’s Prime Minister, and they are a cavalcade of cliches and a parade of parodies. Easily the most unrealistic part of the movie—a movie featuring a literal mountain troll— involves these caricatures. There’s the honorable military man, the unscrupulous defense minister, the solider who breaks the rules for the civilians he’s befriended, and the computer tech working in the war room…hacking into the government’s fighter jets to prevent them from firing a nuke(? the movie is unclear if it’s a nuke or something like that).

There are a dozen moments that made me snort in mockery, point at the screen, and say “that would never happen” and I never did that at any time when the skyscraper-sized monster was rampaging across Norway. I only did it on occasions such as when the defense minister tried to override the Prime Minster right in front of her, or when the hacker officer lady is caught tampering with the fighter jet and is not only NOT immediately arrested but is allowed to just hang out in the war room and watch the rest of the movie unfold. She even lands a sucker punch on the aforementioned defense minister’s jaw and the most the honorable general standing next to her does is wink at her! Are you kidding?

When I say TROLLHUNTER did it better, I mean the story they chose to tell was grounded and simple enough to avoid the messiness that comes with getting the bureaucrats involved.

8/10 – TROLL offers a solid, Godzilla-inspired take on the creature feature, but is let down slightly by moments that strain credulity (and which have nothing to do with a 200-foot-tall monster), a problem TROLLHUNDER did not have. 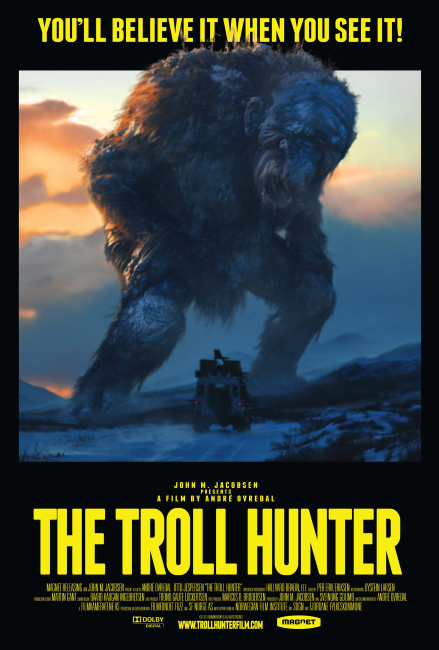 Immediately upon finishing TROLL, I was struck with an unrelenting desire to revisit a movie I hadn’t seen in a few years but which I recalled loving: TROLLHUNTER is, like TROLL, a Norwegian film focusing on the monstrous creatures of legend. Unlike the former movie, this one is not presented as a traditional cinematic event, but as a found footage film, a subgenre of horror that was all the rage in the early 2000s but which was basically dead by the 2010s when this movie was released. The style works, however, because the filmmakers involved used it in creative ways, in unobtrusive ways, and in practical ways.

This movie did not have a large budget but it maximizes every dollar it had to spend by making the trolls look phenomenally realistic. Imperfections in the digital designs are hidden thanks to the shaky, found footage conceit and the fact that most encounters are done in relative darkness. The film is not particularly scary, but it’s extremely captivating, well-paced, and gorgeous to behold, focusing on the vast regions of Norway that are still relatively unmolested by humanity.

The lore here is different from the previous movie, in that there is not one single troll but countless ones, of varying sorts, that live beyond the boundaries of civilization. Something—a giant “mountain king” troll—has become rabid and his eccentric behavior is driving other trolls away, up to the edge of Norway’s cities and towns. It’s up to one man, hired by the government, to dispose of them as they encroach on humanity’s territory. Unlike TROLL, with its over-the-top depictions of government workers, TROLLHUNTER offers a peek into bureaucracy from a dryly-humorous perspective. Our titular hunter is tired from the work he’s employed to do (“I don’t even get overtime for working nights,” he gruffs) and wants to be done with it. The suits that come to cover up the evidence of the trolls are delightfully inept, and thankfully are seen only sparingly. This isn’t their movie; it’s about the hunter and the team of documentarians following him around.

In that regard, the film is a total triumph.

I will offer no more than that, for fear of spoiling it. If you’ve not yet seen it, and if TROLL has caught your eye, seek out the alternative, too. You’ll be glad you did.

10/10 – TROLLHUNTER is a movie that does justice to the found footage subgenre, to Norway as a film setting, and to one of the country’s great creatures of fable. 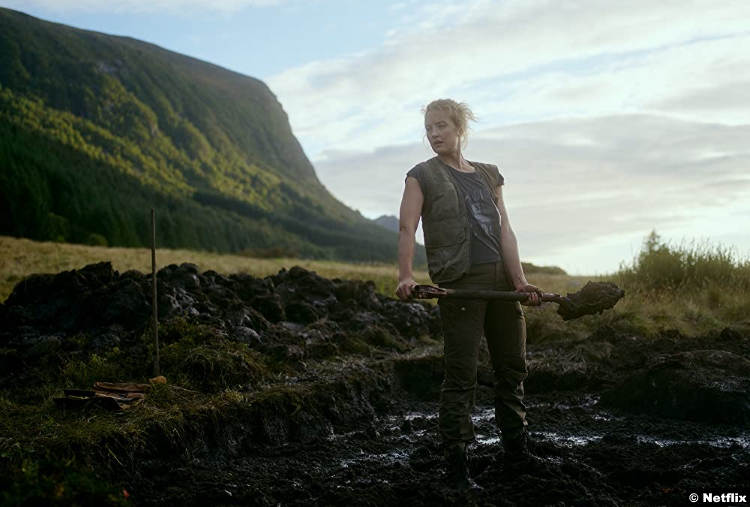