After experimenting with its storytelling form last week, Riverdale is back to a more conventional method this week. As are its characters, sadly. 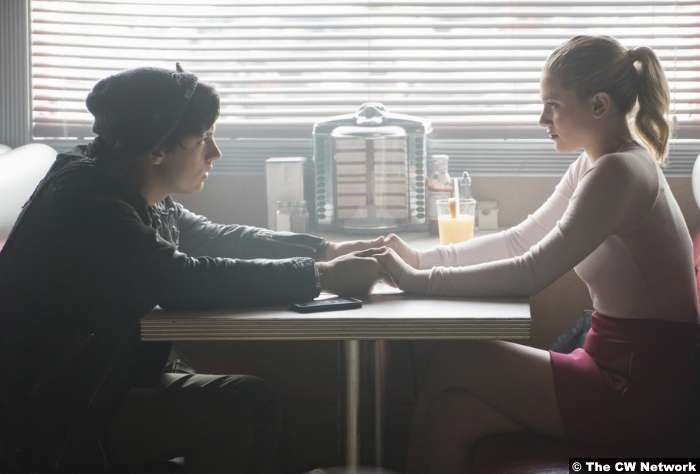 The Black Hood continues to cast a long, scary shadow over the town. The reckoning he’s promised hasn’t come yet, but he does send out some love letters to townspeople, including the Lodges. I’m going to take a blase note from them to transcribe it, “Blah blah blah, sinners, blah blah, punishment, blah blah.” Veronica is less chill because they are actual sinners. In fact, they’ve been sinning vigorously. But her parents still brush it off, enacting a few minor safety measures–Veronica will use a car service, “brawny” Archie should come over more often–to try and ease her worried mind.

That in itself just leads to trouble when Archie tells Veronica that he loves her. She does not say it back. So they spend a good chunk of the rest of the episode thinking and talking over their feelings with their parents and not each other. Veronica finds it hard to love and say she loves someone because she’s never had that kind of relationship modelled for her by her parents. And Archie is maybe not ready to say he’s in love if he snatches back the feeling once it’s not returned.

But before they get to that point–the point where they break up–they have to be Jughead and Betty. More specifically, they have to be the ones who do the Bughead-type detective work, since Betty blew up that bridge last week when she accused Sheriff Keller of being an unhinged murderer.

They’re following the thread Jughead found last week, the revelation that there was once a “Riverdale Reaper.” Digging into the history, we find out that the Reaper killed a family of four. “But someone survived,” I say aloud to the television.

It turns out that going to the sheriff is a bit of nonstarter anyway, because he doesn’t have the original case files. Those are in the possession of the old sheriff, Howard. He’s dead now and his daughter doesn’t know where the files are and she’d appreciate it if everyone would stop asking about it.

Unsurprisingly, the murder house is the house on the edge of Fox Forest where the Black Hood led Betty. That’s where Archie and Veronica find the case files, because the old sheriff would go out there and puzzle over it all, trying to solve the case. Okay, but that still doesn’t explain how the files would just be sitting there, years after the case.

Anyway, quelle surprise, there was a third child who survived. He turns out to be Mr. Svenson, the janitor who’s suddenly around now . He tells them that he ran out of the house once he realized what was going on and then stayed hidden so he’d know who the killer was. It was just some guy passing through. But the most important part of his story is that a group of Riverdale men had him point out the killer, who was staying at a local motel, and then they killed him. Could one of those men have fathered the Black Hood? 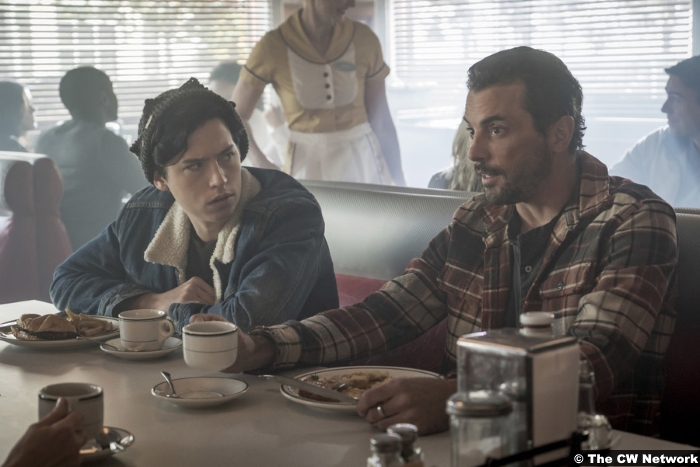 We’re not going to get an answer on that this week. Instead, we’ve got to slither over to the Southside for FP’s retirement party, organized by Betty, of course. FP’s been sprung from the hoosegow, likely because of Penny’s intercession, and Jughead is STRESSED. Not because his dad is free, but because he’s trying desperately to keep the Penny secrets from everyone.

Meanwhile, Betty is trying desperately to keep a toehold in Jughead’s world, even if that means that she has to do the “Serpent Dance” at the party. That means that in order to be an, I guess, old lady in the Serpents’ world, you have to do a strip-tease? I would have so many questions, but Toni acknowledges the grossness of it and we just had a drag race like, five minutes ago, so sure. The one remaining question I do have, though, is how on earth would Betty think this is something Juggie wants? At the very least, she should have stopped when she saw him making his birthday party face.

I would also ask why she would do that in front of Alice, who is also at the party, but Alice is a lot more relaxed at the White Wyrm than she is in literally any other social setting. 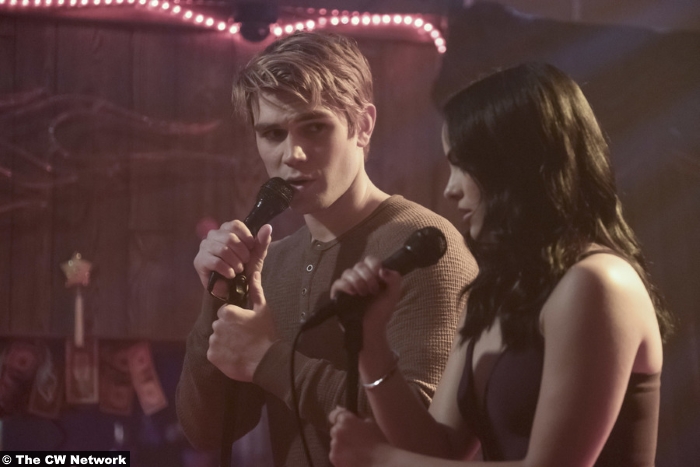 And the unsexy Serpent Dance (accompanied by “Mad World” of all songs!) isn’t the cause for everything falling apart, but it might as well kick it off. Here we are at the end and FP’s going back on his talk about going straight. Veronica and Archie break up because they’re not on the same wavelength all of a sudden. Jughead breaks up with Betty because he wants to protect her, not necessarily from the Serpent world, but from one particular snake-handler. We end the episode with Archie staring longingly out his bedroom window at Betty, who’s staring back. Let’s not, shall we?

It’s a very, very mad world. And that’s without counting the very determined murderer on the loose.

8/10 – I’m going to be nice and not deduct a point for my having to hear Veronica refer to sex as “making it,” like we’re in a Bread song. Nevertheless, I did not deserve that. Overall, this was a lot of drama for people who seem to forget when it’s convenient that there’s a killer out there. The breakups didn’t feel organic; they felt constructed and contrived. I know this is all just a story, but usually the show is much better at making you forget that.