The Walking Dead S08E07: Time For After – A strong performance is undermined by core problems

Despite my obsession with Game of Thrones episode titles, and how they inform each episode, this doesn’t really come up that much in my reviews of The Walking Dead. There are obvious uses, like “Monsters” being a stupid title which informs the reductive attitude to the show’s psychology, but usually I don’t mention their significance. This is mostly because the episode titles are usually from lines a character in the episode says (my personal favourite of these is Maggie’s delivery of “Four walls and a roof” from season five), usually Carl. This time it was a line from the leader of the Garbage people. That should give you a clue about the quality of this instalment.

At least it hints at the quality of the Garbage people scenes, and they are terrible. Rick’s underwear has magically returned as the garbage people promise to sculpt him. How dare they corrupt art in this way. That’s besides the point as I eagerly awaited the ace that was up Rick’s sleeve, which I now realise is a bad metaphor considering his lack of sleeves. After all, why would our fearless leader get caught on purpose without it being part of a cunning plan. Well, it turns out this cunning plan is the type of thing Blackadder used to hit Baldrick for. Rick’s plan was beat them up by himself. Seriously, it’s getting really hard to take when the un-killable Rick Grimes is so full of himself that he can turn the Garbage people into allies single-handedly. 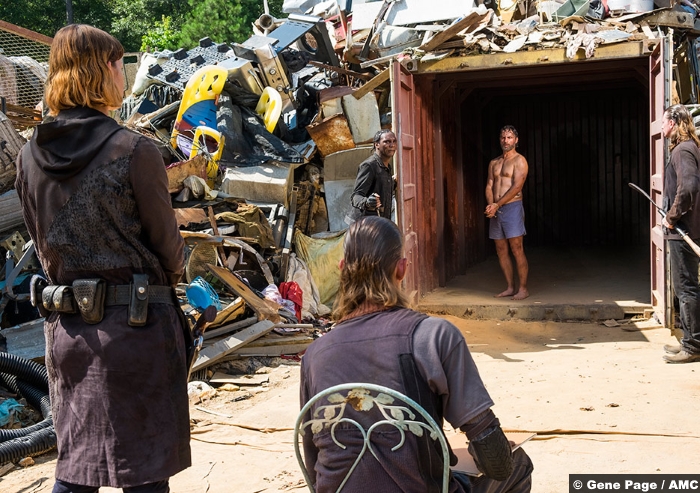 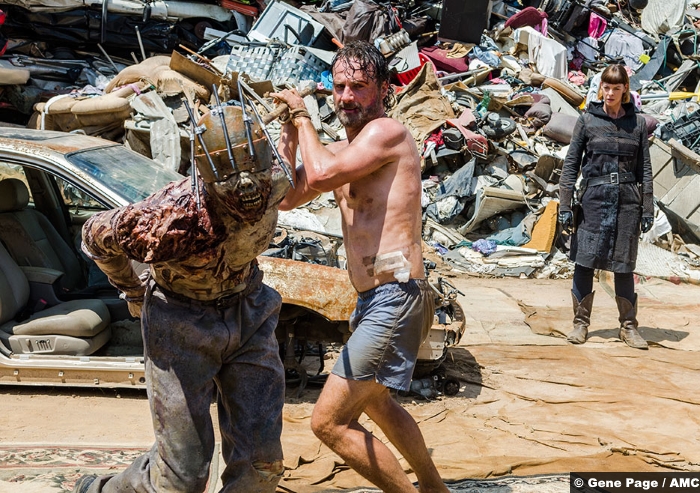 Despite the writing, having Eugene as a presence that symbolises both sides of the conflict as our eyes inside the Sanctuary continues to be one of the stronger parts of The Walking Dead, but it wouldn’t be me reviewing this show if I didn’t point out why this is also a bad thing. It is quite strange to think that two of the show’s strongest episodes this year have been from Eugene’s point of view. His season seven episode that showed that Eugene had found his place, and this episode where that way of life is threatened. I’m all for Eugene being a strong and compelling character, I really like what his switch to team Negan has done for the show, but it further proves how static the main cast is.

Darryl, Tara, and Morgan have become shadows of their former selves, all through trauma and loss, but I’m just not seeing that on screen. Even Morgan stalking off, saying that he’s done with all of this, turned out to having him revealed as one of the snipers covering the compound. As usual, some narrative steps have been missed there. 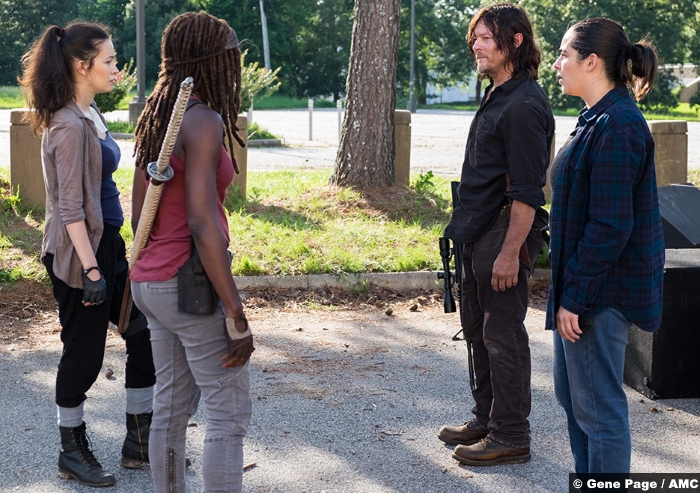 Back to Eugene now. It’s not all great: Eugene’s genius methods of negotiation are telling Dwight not to do any more betraying and he won’t tell Negan about the betraying Dwight has already done to get them all in this mess. Also, how long did it take for someone, probably Eugene, to come up with the bright idea of barring the main entrance to the compound? Still, with Eugene’s intellect, and flowery delivery, the show has a character that can communicate the complex emotional turmoil he’s feeling. Think of Eugene’s interactions with Negan’s wife or Dwight, and compare this straight talking to the crap that Michonne is saddled with. The Walking Dead has suffered from this communication breakdown for a long time. The writers strive to put across these important themes, and communicate them in a meaningful way, but they, and the characters don’t have the vocabulary to pull it off. Even when they have a character like Father Gabriel, who should be able to put these themes across, they fudge it. 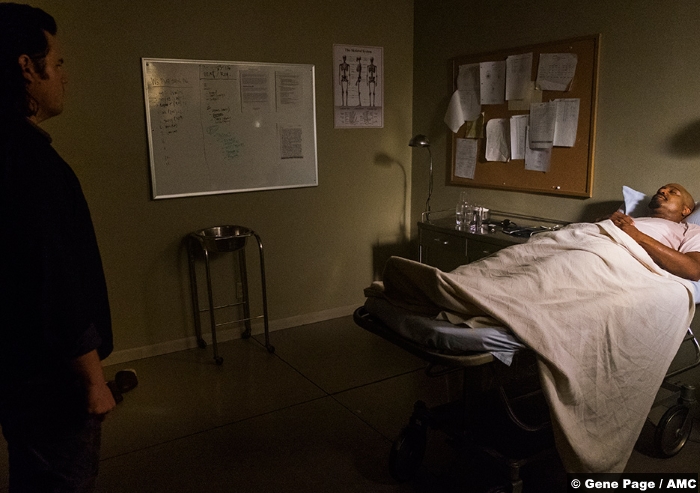 It’s becoming increasingly clear that Father Gabriel can’t do anything right. He’s the only character who could possibly let Gregory take his car, or think that he’s worth saving in the first place, he’s the only character who has gotten sick by smearing corpses on himself, and instead of killing Negan, actually saved his life. Although I blame the doctor for putting his glass of water so far from his bed. Eugene’s conversation with Father Gabriel further demonstrates how mismatched these characters are on a writing level. Every action or reaction from Eugene makes complete sense considering what we know about him. He is a survivor who uses his wits, and his ability to seem useful to stronger people that keep him alive. When Gabriel starts talking about Eugene needing faith, accompanied by God’s light coming through the window (proving that a great shot can’t save a confused story) seems like hot air. Where has this faith ever got Father Gabriel?

The topic of belief is an important one from this episode as a viewer. Did you believe that Rick was in any kind of danger? Did you think Eugene would act in a way that would go against his character? Did you think that Negan, or any important Saviours would die from Darryl and Tara’s plan? The answer to all of these questions is a resounding no. One good character cannot save an episode of a show this far off the rails, despite Eugene’s best efforts. The lead character is a terrible planner, the villain is barely a threat at this point, and it takes a surprise reversal to inject any dramatic tension. Where have the Walkers gone? Maybe they’re in the Sanctuary, that would make sense after Darryl’s plan. Except that result wouldn’t put that look on Rick’s face.

5/10 – Eugene’s best efforts can’t save a show that dying from the infection of the dead story that it’s smothered all over itself: like that idiot, Father Gabriel.