The Walking Dead S08E01: Mercy – Celebrating 100 episodes with a lot of set-up and a little pay off

The 100th episode of The Walking Dead was dedicated to George A Romero (and the stunt man who died tragically during season eight’s production), who died earlier this year. George, as his fans call him, was the undisputed king of the zombie genre. He created the modern zombie with his fantastic trilogy of films Night of the Living Dead (which is my personal favourite), Dawn of the Dead, and Day of the Dead. His legacy stretches far beyond those landmark films: without his influence, as well as his collaborations with make-up king Tom Savini, there would be no show like The Walking Dead. So, the question is, does The Walking Dead deserve to be mentioned in the same breath as George’s films?

Arguably yes, considering that, eight seasons in, The Walking Dead is one of the only popular properties left from recent zombie craze it helped start. Only Z Nation, and Fear the Walking Dead are still a going concern. The one thing that goes against The Walking Dead, compared to Romero’s output, is that the master of the undead always had a firm grasp on themes. I realise that telling a story in film is a lot different than on television, but The Walking Dead, especially after season seven, is more of a thematic sludge. Over 100 episodes fans have been given interesting stories and characters in the burgeoning zombie apocalypse, but somewhere around Terminus, The Walking Dead became a complete mess. Season six was patchy, but frequently exciting, whereas season seven was a complete trial to endure. Can season eight do the impossible? Can it turn the shows fortunes around and make it must-watch TV again?

Mercy, the season eight premiere, seems like the show is going in the right direction. After the events of season seven Alexandria, the Hilltop, and the Kingdom have united in all-out war against Negan and the Saviours. After the idiotic tiger ex machina antics of the season seven finale there was a very real fear that the show would revert to its usual pattern going forward: war is declared but it would take an age for anything to happen. 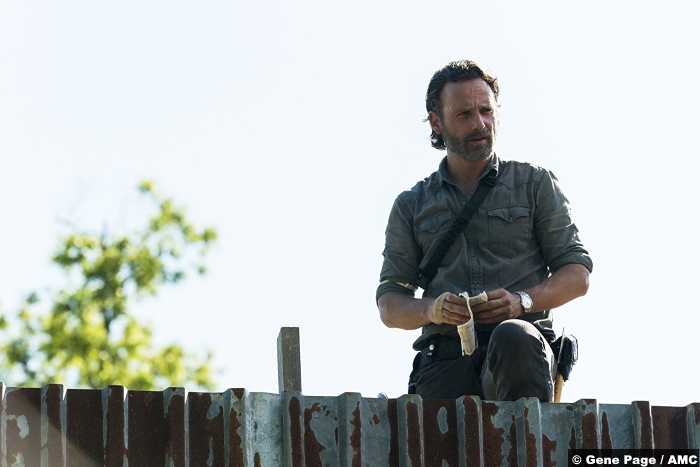 Thankfully, this turned out to be false. Rick is now spearheading a plan to strike a crucial blow against Negan, with the episode switching back and forth between timelines to show the different components of Rick’s plan, and who would be responsible for what. I applaud the writer’s decision to get things moving quickly. While season seven was dreadful its ending did have a real sense of forward momentum, and Mercy picks up right were we left off and Rick is taking the fight to Negan. It’s interesting stuff, but there is a problem with the way in which the episode presents itself.

This is very much Rick’s story, the entire show is Rick’s story so it makes sense that the 100th episode would be centred on him. The problem is in the editing choices, and the content of the flashbacks, and possible flashforwards. The plan is pretty simple: Rick Maggie, and Ezekiel take their combined forces to the Sanctuary. Before they can do this Dwight gives Daryl the locations of the lookouts on the way to the Sanctuary: each of which are killed. Rick and co attack the compound while buying time for Daryl, Morgan, Carol, and Tara to lead a horde of walkers to the compound with cool explosions, explosions that also take out Saviours that Dwight has sent out on recon. The final move is to blow up the Winnebago and let the walkers overrun the command. See, simple, so why did Scott Gimple and Greg Nicotero feel the need to break this into a non-linear pattern? All this dd was make the plan hard to follow in real time.

Now the flashforwards. The sight of an older, slightly biblical-looking Rick has been at the forefront of the advertising for this season. It suggests a considerable time jump in which Rick, Carl, Michonne, and Judith live happily. This suggests that Rick does beat Negan, but another sequence, in which is, more typically, miserable seems to suggest otherwise. Is this flashforward true? Is it something Rick can only wish for? Here’s the real question: do we even care? Seriously, these sequences don’t belong in this episode: the war has just begun, we want chaos, we want casualties, what we don’t want is the guarantee that some characters will survive.

One character that we hope doesn’t survive is Negan. I feel incredibly sorry for Jeffrey Dean Morgan, as he managed to reign in his performance in the second half of season seven to become a little watchable. When used sparingly Negan is a unique presence. His failed gambit to use Gregory to sway the Hilltoppers was the first sign of weakness and the writers had to ruin it with the “shit your pants” nonsense. Negan looks doomed, but story-telling logic foretells his death will come at Ricks hands. It’s really fitting that Negan is stuck with Father Gabriel. Both characters have had little real development, and move the plot along by being stupid. 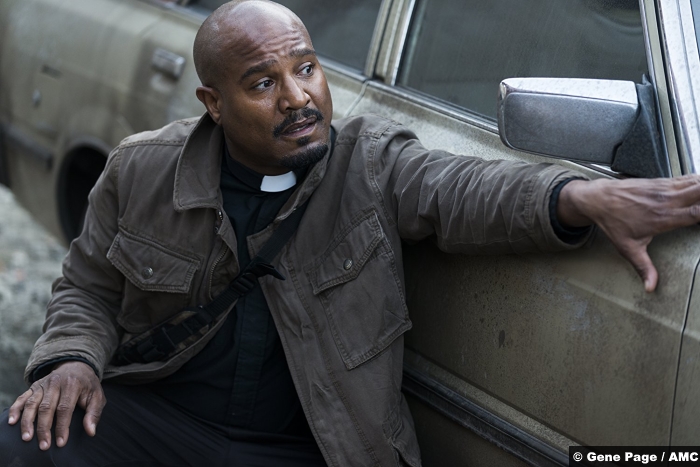 Gabriel’s prominence in Mercy, or in any episode, is still baffling to me. Look at some of the scenes in tonight’s premiere. Short conversations between Rick and Maggie, Daryl and Carol, hell even Carl and his stupid “hope” comment, these all have an impact because their characterisation has been earned. Not so with Gabriel. He was against the group then he wasn’t, with much of his development from one state to the other happening offscreen. This makes it all the more difficult to buy this bond that he has with Rick.

6/10 – Mercy was an almost welcome return to the exciting version of The Walking Dead. There was a confidence in the story that has been absent for some time, and Andrew Lincoln continues to crap on those lists that call Rick a boring lead character. Problems remain though as the show is still shy about killing major characters, and padding episodes with editing and shooting styles of a cerebral indie film. Still, they may make George proud yet.