The Walking Dead S07E05: Go Getters – A visit to the Hilltop can’t stop this poor run of form

As many of you can tell by my previous reviews, I really want to like The Walking Dead. Like so many, I’ve gave a considerable amount of time to this show, been delighted by its highs, and gutted by its many lows. There really isn’t another show like it: a show that is so loved and hated by the people who still watch it in its seventh year. This week, after sitting through the drudge of an hour tha was Go Getters, my patience has finally run out.

Before starting to review The Walking Dead week to week, a gig that was always going to be entertaining due to how the quality of a typical episode of the show could shift back and forth from scene to scene, I went back and looked at other writers that have covered the show in the same way in its past seasons. One thing became clear: there is a least one week in which every writer loses patience with the show completely. Ladies and gentlemen, this is my week.

That’s not to say that I’m done with the show, far from it, if nothing else, Go Getters sets up some enticing plots for the future, and we all have to see if the Daryl Morse code theory comes to anything. Instead, season seven as a whole has got me asking a lot of questions about the nature of The Walking Dead. For instance: what does this show still offer viewers? At the beginning, The Walking Dead was a nuanced portrayal of a group of survivors after a zombie apocalypse. While it still had the genre trappings of gore, and some terrifically executed action horror scenes, The Walking Dead was much more about the how the characters rebuilt their worldview, rather than world building itself. It wasn’t until the second half of season four (believe it or not, I was a fan of the farm), that the cracks really began to show. Instead of the characters having that natural lived in feeling, they stalled. Glen and Daryl’s character development basically ground to a halt, Rick’s turn to the dark side was clumsy and unconvincing, and new recruits like Abraham, Rosita, and Father Gabriel where only half filled in. There are some bright spots: Carol and Morgan have been consistently strong, mostly due to the fact that the actors who play them are fantastic, and season six effectively built up to the Negan reveal even if it couldn’t quite stick the landing. If this episode went back to The Kingdom I would have been much happier, instead, Go Getters has us spend time with characters that the show really hasn’t served well.

Let’s start with poor Maggie and Sasha, aka, the walking death omens. While both have potential to be great characters in their own right, especially Maggie, they are constantly being informed by the people they lost. Think about it, what can you say about who Sasha is as a character if you eliminate her plot with Tyrese, Bob, and Abraham? Who is she when she’s not with them or mourning them? Sasha has been on the show since season three and we’re still no closer to discovering who she is. We know she’s brave, as her willingness to leave the Hilltop so Maggie can stay, and her running head first into a horde of zombies makes clear. But that doesn’t tell us much, they’re all brave, even Eugene the cowardly lion. Then there’s poor Maggie. Maggie has lost everyone: her father, her step mother, her little sister, and now her husband, it’s a mark of her resilience that she’s even still standing. Maggie, despite the fact that Lauren Cohen only gets to do grief-stricken, is a character that inspires loyalty: which can be seen with her scenes with Enid, and was being groomed for a leadership role in Alexandria. Despite an episode where she spent half the time hiding in the closet, she also killed a car, and a bunch of zombies with a tractor, Maggie’s permanent presence at the Hilltop could be an intriguing development. 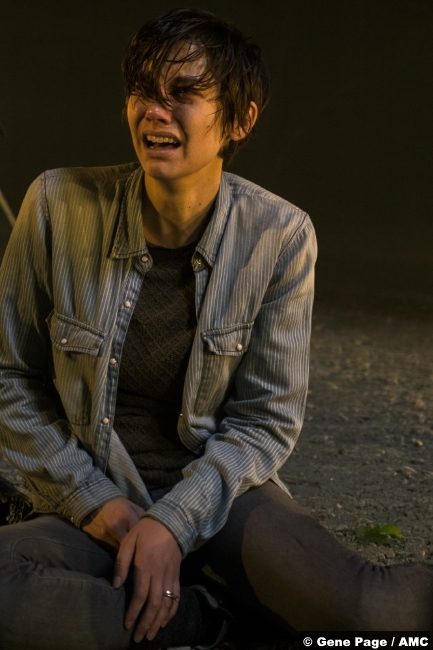 Now for some unwanted advice to The Walking Dead writers: stop trying to make Carl and Enid a thing, it’s always going to be boring. I nearly hit the roof at the skating scene. If there’s anymore of this crap I will be forced to have to come up with appropriate cheesy teen movie titles for their scenes together. For this week its “The Fault in Our Cars” in honour of Carl’s terrible driving. 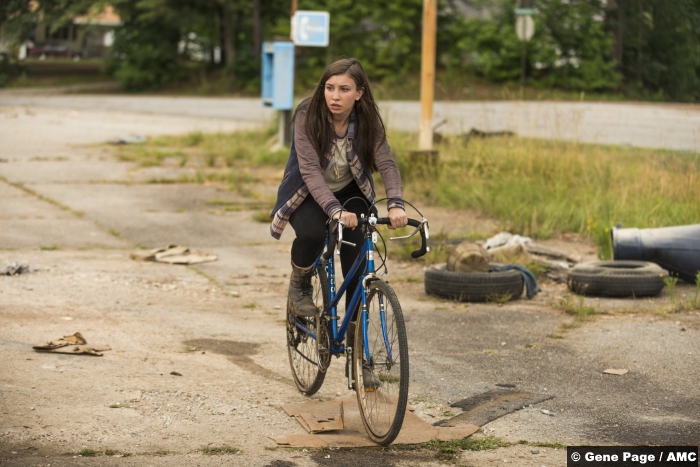 Season seven’s main theme seems to be consequences. Glen and Abraham payed a mortal price for Rick and the gang’s “butchering of the Saviours, Daryl is paying the price for his confrontations with Dwight, Alexandria is paying for all of it, and now Jesus, and the Hilltop folks are paying for making the deal with Rick in the first place. On paper, this is a potent avenue to go down, but in application it’s just been the Saviours going around like bullies taking your lunch money then making you thank them for the pleasure. I think that five episodes in, and seeing the same thing happen at Alexandria, the Kingdom, and the Hilltop, those who didn’t catch on that Negan’s crew where bad news has caught on now. Seriously guys, it’s time to do something different, maybe something that includes Carol, Morgan, and the badass with the tiger.

4/10 – Being a Walking Dead fan these days is like being a glutton for punishment, so in that spirit I’ll see you all next time for episode six. Hopefully Ezekiel will come and save us all.