The Walking Dead S08E05: The Big Scary U – A solid episode that is a mix of strengths and weaknesses

It’s a sad state of affairs when two characters that I have been frequently critical of become the strongest aspect of an episode. It should be a good thing: a sign that The Walking Dead can still pull off some surprises, and that is certainly true of Negan and Gabriel’s adventures in actual characterisation. The problem here is that, while this is a surprisingly strong road for the show to go down, it also highlights how static the character progression has been for both characters up to this point. What’s much worse is that it also highlights how static the characterisation of the main cast has been on the show for quite some time.

The Walking Dead has a massive cast, not Westeros levels, but big enough that some characters getting short-changed is hard to avoid. By having five different settlements, with three going to war with the other two, and let’s not forget the garbage people, the amount of characters needed to pull off this epic story has stretched the show very thin. Because of this Rick, Maggie, Daryl and Morgan are stuck in a rut, with only Carol being consistently compelling. Indeed, the decision to include Rick and Daryl’s fight only serves to pull focus from the Saviours, and isn’t interesting on its own. After four episodes of incoherent action, and the good guys winning, but at a predictable price, it’s time to see how the “bad guys” are doing. 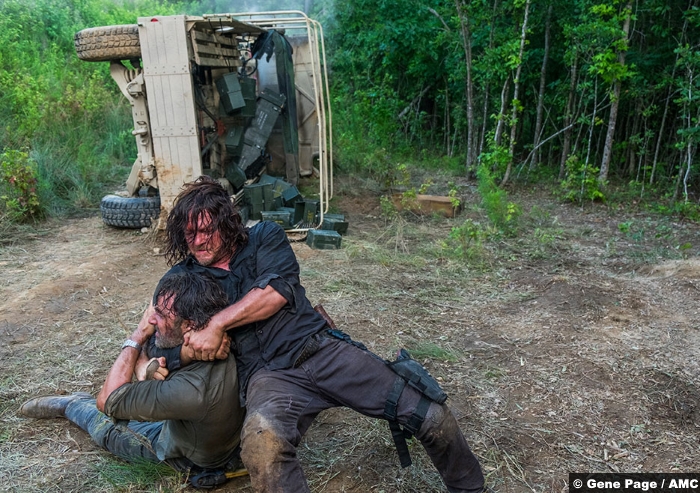 Rick and Daryl’s inclusion has the stink of the show’s writers being weary of the fan reaction to an episode solely about Negan. That’s understandable considering the polarizing response to Jeffrey Dean Morgan’s portrayal of the popular antagonist of the comics. I’ve spent a lot of these reviews analysing why Negan doesn’t work for me, but I still admire this attempt to put some narrative meat on this bare-bones villain. The fact that it has been three full episodes since he and Gabriel got trapped also suggests that the show wants to distance Negan from the narrative in favour of Rick’s meticulous, but still vague for reasons of cheap drama, plan. At first, I was all for that, but nearly three hours of boring shootouts with disposable Saviours only serves to highlight the fact that we can’t take this war seriously if the show is ignoring the guy that is supposed to be defeated. 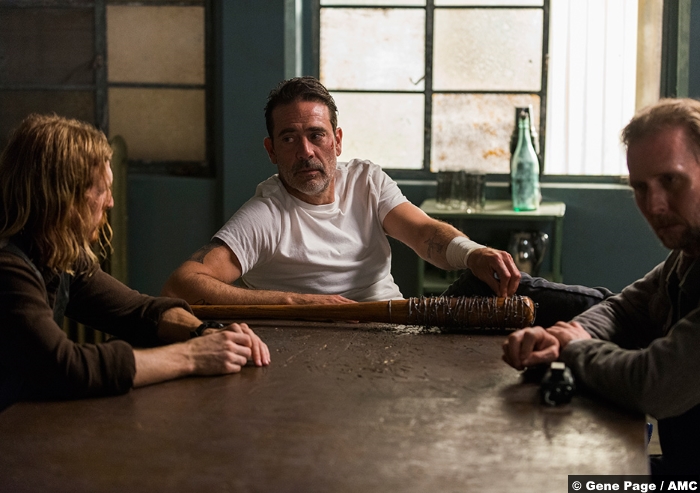 As much as I enjoyed The Big Scary U, it does still feature a whole mess of the show’s problems. The episode begins with Gregory and Simon at the beginning of the day of Rick’s attack. Gregory’s appeal to Negan, and his lieutenants is completely irrelevant due to the fact that we know everything that is about to happen. There is no tension in the scene because we already know that Gregory will escape. The only reason for having this scene start the episode is to adhere to the apparent house style of this half of season eight. Last week’s Ezekiel episode used the same trick: the beginning of this day from different perspectives. This adds nothing to proceedings except as an example of how The Walking Dead is misusing the concept of the non-linear narrative. When used right, say in the films of Christopher Nolan, or Westworld’s looped timelines that draw attention to subtle differences, and even How I Met Your Mother, this concept can be used to build momentum, play with perspectives, and add some flare to an otherwise traditional story. Here it grinds the story to a halt, giving us the literal feeling of having to rewind to events that have already been well covered. 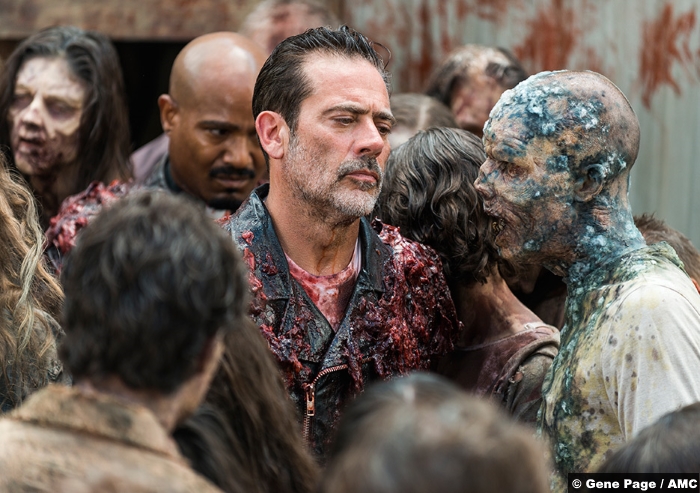 Negan and Gabriel’s little chit chat is the best part of the episode, but that praise has to be qualified with how the show has failed these characters up until this poinbt. Some character arcs can happen in the background, and when the spotlight is finally put in their direction that slow work pays off handsomely. Gabriel hasn’t had that development, with much of his progression happening off-screen, which produces the feeling that the priest has had a personality transplant every few episodes; and that’s when the show remembered that he exists. Negan is different: the main function of the character is to play up his extremely limited villainy. Gabriel and Negan’s time together doesn’t solve these problems, but it does make them more rounded. What’s exciting here is that, depending on whether the next episodes will continue this plot, the show doesn’t seem to be finished with them. Negan shouldn’t be fully humanised, mainly because that has an adverse effect on the static Rick, but knowing something about why he is like this, and his function at the top of the Saviour’s community more fully communicates the fact that there are two sides to this war. With how important Negan and Gabriel are to the story: especially Gabriel’s quest to get the Saviour’s doctor back to Maggie at the Hilltop, it’s galling to think of how long it took for the show to make them feel like they mattered.

6/10 – It’s amazing to think that I would have probably marked this higher if the episode was just Negan and Gabriel in the trailer, but Rick and Daryl bring it down. Although, Eugene does get an honourable mention, but he shouldn’t trust Dwight.