The Walking dead S07E11: Hostiles and Calamites – Eugene and Dwight showcase the two meanings of being one of the Saviours

Hostiles and Calamites is such a typical move by The Walking Dead that I’m not even a little bit surprised. It seems to be the show’s go-to strategy that anytime it even gets a little bit close to gathering momentum they give us an episode like this which stops the story, for lack of a better word, dead.

The previous two episodes have been all about the comeback: Rick gathering supplies and support in order to attempt an uprising against Negan.  The group have been given their next task by the settlement that took Father Gabriel: get guns in exchange for support. Great, let’s go with that. Instead we get an episode which parallels the events of these two episodes from the point of view of the Saviours compound, starting with the puddle of brains Darryl eft Negan as a goodbye present. From here the point of view switches between Darryl’s captor Dwight, who in Negan circles is something akin to a made guy, and newcomer Eugene. 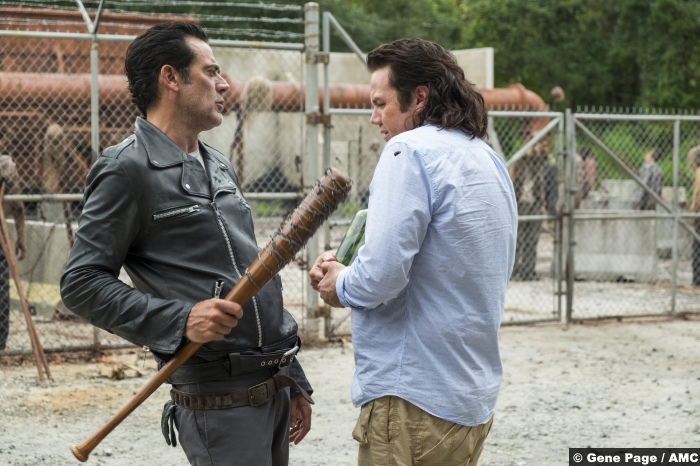 The Walking Dead is a slow show, taking far too many episodes to set up what is really just the events of the season, or mid-season finale, mostly by basing episodes around different characters that should represent a different, and compelling route to go down narratively speaking. Hostiles and Calamites is one of those episodes, one that relegates most of the show to tell a smaller story. Whether it succeeds or not will have a lot to do with how you feel about either Dwight or Eugene. I personally thought that this episode worked. Yes, it’s frustrating how much The Walking Dead is addicted to spinning its own wheels, but this episode told a compelling story about characters that don’t always get the spotlight and, shockingly, Negan didn’t suck.

Eugene is a coward, plain and simple. He was introduced to the show in the fourth season as part of the Abraham/Rosita package spouting a plan to get to Washington to find a cure for the zombie virus. Like most things with Eugene the plan turned out to be a piece of very clever bullshit, a way to keep himself with capable people in order to survive. Since the revelation of that bullshit plan Eugene has been nothing more than a background player, never more than the comic relief. There was an episode in which he proved that he was as brave as everyone else by saving Tara, and he bit Dwight’s dick (which Dwight seems to have forgotten about; he forgets things dontcha know). 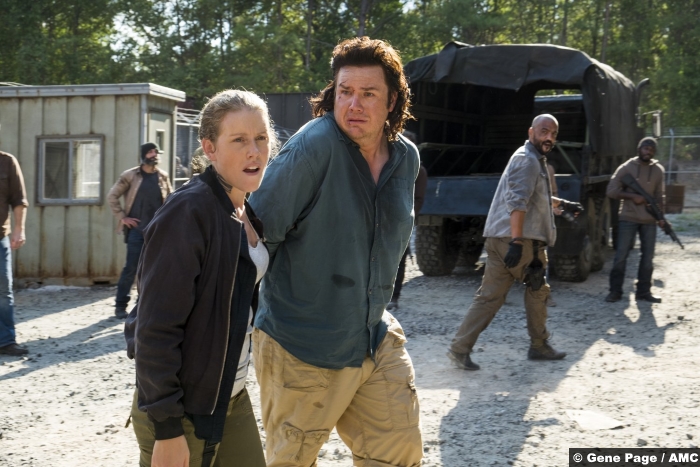 Eugene is a coward but he is also hustler, in his own terms a man apart in intellect and it has served him well thus far.  That is until his last act of bravery got him taken by Negan ion order to save Rosita. As I said, Eugene has never had the spotlight all to himself so who knew that an episode based around him would be any good. Yet it is good, not because of Eugene himself per se but due to the contrast of his experience of the Saviours and Negan to that of Darryl’s. The opening scene in which Eugene comes face to face with Negan is a good example. Eugene, sensing his own precarious situation, falls in line quickly by playing up his worth to Negan. He is then taken to his own room, looking like he’s going to piss himself the entire time, only to be given creature comforts like pickles and books. We even get another rendition of “Easy Street” the song that drove Daryl half mad when used as an ironic message of torture, here perfectly describes Eugene’s situation: he’s on easy street.

Eugene is an asset to Negan: he can manufacture bullets, come up with solutions to firm up the wall of Walkers, and is technically a medical doctor. Negan quite rightly feels that in Eugene he has a goldmine at his disposal. It is in Negan’s treatment of Eugene compared to that of Dwight that gives Hostiles and Calamites it’s through line. After all this is Negan’s kingdom and if you displease him, made guy or not, you must pay the price. Dwight knows this better than anyone being on the receiving end of the scolding iron, which isn’t helped when Daryl’s escape outs him in Negan’s sights.

Dwight must find his ex-wife Sheri, who actually freed Daryl not Jesus as I first thought. Dwight is told in no uncertain terms that he dies if he can’t make this right; either by bringing his ex back or killing her. He does neither as he finds a letter from her at their meeting place asking forgiveness for turning Dwight into the man he is now. The horrible part is that Dwight had no intention of killing her, or bringing her back, he wanted to go with her: even bringing the planned pretzels and beer mentioned in the letter. So, to cover both their asses Dwight callously blames the compounds doctor for freeing Daryl, a brutal decision that keeps her alive and Dwight in Negan’s good graces for now. 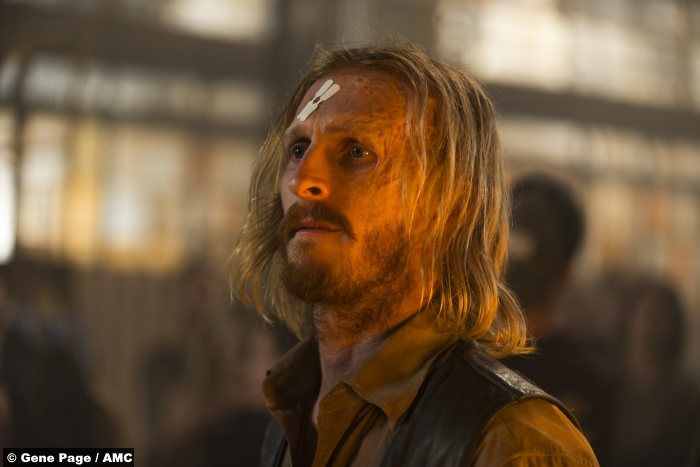 Through Dwight and Eugene, we are shown multiple examples of cowardly behaviour to stay alive. It’s easy watching a show like The Walking Dead, having hypothetical conversations about how you would survive the zombie apocalypse, imaging yourself as someone brave, who could make tough decisions and kill when you have too. Eugene and Dwight are more realistic in their behaviour. As much as Eugene’s rushed proclamation that he is Negan makes you cringe what would you do if Negan and Lucille were in front of you asking that same question? Would you prefer the bat? The iron? The smelter? Or would you say you’re Negan?

7/10 – Despite taking another break from the main plot Hostiles and Calamites was a surprisingly compelling side-bar which gives us our most detailed impression of what it’s like to be a Saviour so far.