I’m sure this isn’t a new criticism, probably it’s the most common criticism of The Walking Dead’s structure, but the fact that a season of the show is split into two parts is becoming increasingly tedious. Don’t get me wrong, I know why AMC do it: The Walking Dead is still popular because it’s a hype show, and the two month break is designed to get fans mouths watering again for what will happen next, but it really is affecting the quality of the show. What if Hearts Still Beating wasn’t the end of the first half, what if we had the start of the groups rally against the Saviours next week instead of February?

Well for one thing, there wouldn’t be as much pressure on this episode to deliver quality that will make fans, who have been increasingly let down by season seven, come back for more. That way the show could build on the momentum of the episode’s hopeful ending. Instead we have two whole months to realise that this episode, and this half season hasn’t earned that ending one bit.

The reunion of the group is a cause for enthusiasm, and Rick hugging Daryl is the most heart-warming thing to happen in the show since the last time Daryl hugged someone (instead of “kill Daryl, we riot”, it should be “when Daryl hugs we’re in floods). Yet the very thing that made this reunion so effective: everyone being so scattered, and looking for interesting plots of their own (many failed), is the main reason, bar Negan, that season seven has been so disappointing. 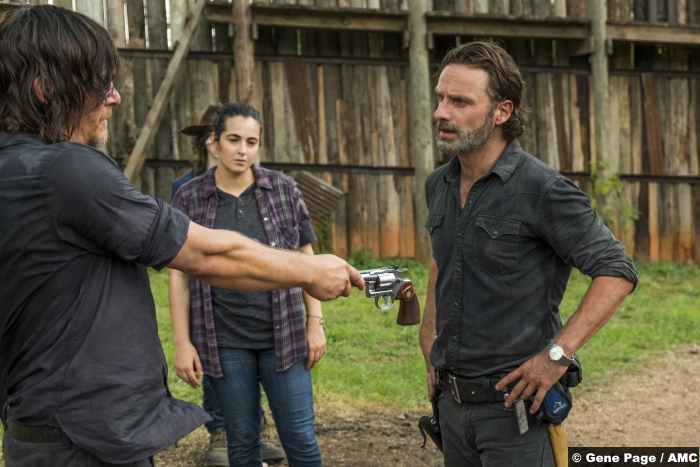 I’ve talked a lot about the show’s longevity, how any show that has been on this long is doomed to repeat the same old character beats, as is the reviewer that has to keep pointing this out. Well the reunion at the end of this episode is the same as when they escaped Terminus, just less interesting. It does give the show hope for the future, and I for one am looking forward to February to see if we can finally climb out of this misery pit and fight back damnit!

If it wasn’t for its hour long run time, Hearts Still Beating would have been a contender for best episode of the season so far. When will networks learn, more minutes doesn’t mean more quality, have they learned nothing from the last series of Sons of Anarchy? If we eliminate Carol and Morgan form the episode, and cut Michonne down then we would have forty solid minutes. These plots do absolutely nothing to move the plots of their characters forward. Michonne could have come to the stronger together conclusion by being in Alexandria, and we already know that Morgan refuses to kill, and that Carol wants to be left alone. Fair play to the Kingdomite (that’s what I call two-dimensional characters from The Kingdom). Why wouldn’t he ask for help, but we already know what Carol and Morgan’s views on this are because we already seen them both when Rick rallied against the Saviours the first time: Morgan was against it and Carol left. As for Maggie, Sasha and Enid: apart from the reunion there’s nothing worth talking about, accept that Maggie is ignoring her Doctor’s orders: he said rest Maggie not climb walls so you can be in such clear view that any passing Saviour can report that you’re alive. That probably won’t happen, because the script said so.

Is it just me or is Negan getting better? He will always be divisive but this was definitely Jeffrey Dean Morgan’s best episode since his introduction. Playing down the verbal ticks that grate on me so much, Morgan actually became threatening again. His conversation with Spencer (I swear, if he didn’t introduce himself to Negan I would have had to look his name up, I’m glad he’s dead), was tense in a way that hasn’t happened with anyone else. It was a great power play, because Spencer was right, Negan has a business, and he isn’t going to trust gutless cowards who betray their leaders and then ask the big leader to trust them. His bloody point made good business sense, and once and for all gets rid of the last crap Alexandrian. The standoff between Rosita and Negan was even better, and the choice to kill Olivia was as shocking as it was undeserved. 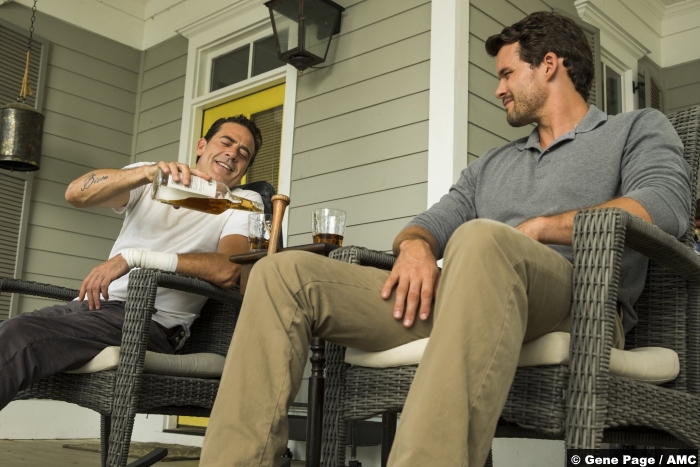 Now Negan has Eugene, which will soften the blow of losing Daryl who got Rick’s gun back and escaped with Jesus, which will bring a lot of bloody consequences. I could criticise the show for not being brave enough to kill more main characters as it settled back into the rhythm of killing supporting players in place of actual stakes. Instead this episode gets a pass for not killing Aaron even though he should have died. Nothing makes it clearer that someone is now main cast than them surviving a seemingly impossible situation, but Aaron is important to the show as his hopeful outlook rings a lot truer than anything Father Gabriel has come up with. 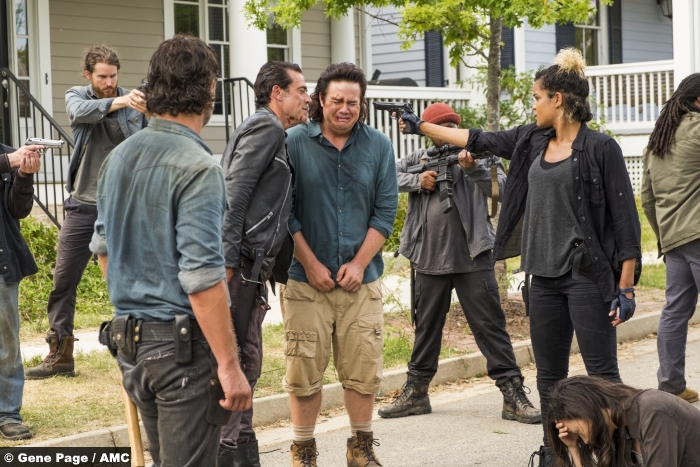 The real strength of the episode is, once again, Rick Grimes. The full season hasn’t earned his transformation from brow-beaten lap-dog, to the leader he once was, mainly due to his absence for whole episodes, but it has showcased some of Andrew Lincoln’s best work with the character, especially with his eyes, that’s some stellar eye acting. Season seven has been a mess that has only sometimes been entertaining, but there is still hope that this is where the show needed to go in order fully get its groove back. The season and a half of set up is done, now it’s time for the pay-off.

6/10 Without the need to include every main character Hearts Still Beating would have been a great episode, but alas season seven can’t get anything right. See you in February where we can torture ourselves all over again with the final eight episodes.