Riverdale S02E19 Review: Prisoners – There was a lot going on in this episode!

After a long period of dogged investigations, false leads, and a lack of closure, finally on April 25, 2018, a killer who terrorized his community and others has been unmasked. 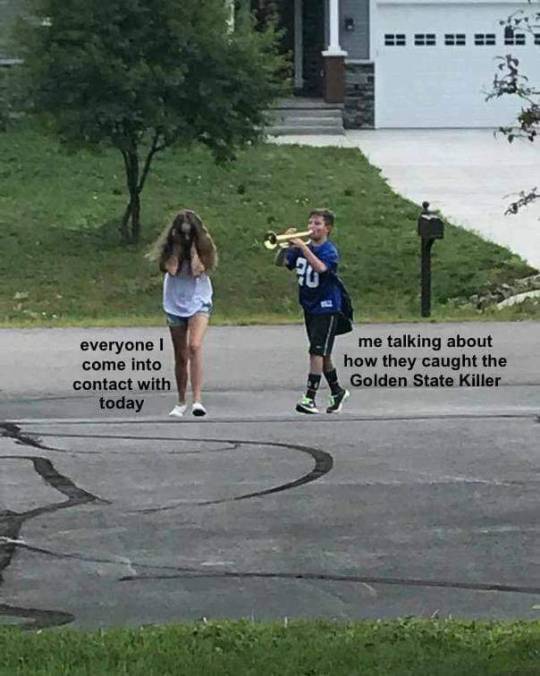 That’s right, people! IT IS KNOWN. Wait–did y’all think I was talking about someone else in a black hood?

Ohhh, I see. Well, before we get to that, we must lay poor Midge to rest. Her funeral is the first sign that people, meaning Cheryl, have had it with Sheriff Keller. He’s not an inept buffoon, but..this little burg has a startling mortality rate. Not Cabot Cove numbers, but still unnerving. And teenagers have been making way more headway in his cases than he has.

Never one to let a good opportunity to foment dissension go to waste, the Lodges immediately step up to drive the wedge in deeper. To that end, Hermione encourages Cheryl to write an op/ed for the Register slamming Keller, which she does. Then someone who was definitely not paid by the Lodges spray paints “KILLER” on the sheriff’s car. There are rumblings that he should step down.

Meanwhile, the rest of us have real things to do, like find the Black Hood. As the police want to question Chic, since he was backstage, Betty decides to answer some of her own questions about him. Knowing that her half-brother was at Quiet Mercy the same time that Svenson was, she and Jughead go there. The nun they meet is hesitant about just opening up the records until Betty threatens to call down thunder and lightning on the facility for their “secret gay re-education camp.” Uh, is that still going on? Maybe want to call the authorities, anyway. 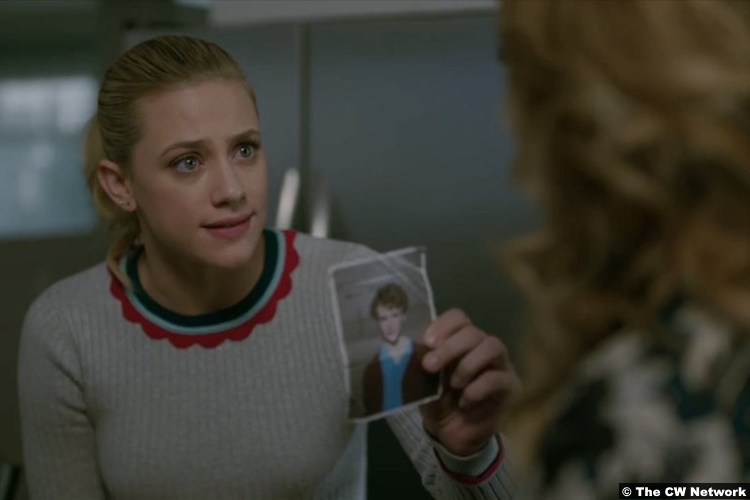 Svenson and Charles overlapped for two years at the home, but what’s actually shocking is that the photos of Charles are clearly not Chic. Betty and Jughead return to the Coopers’ to tell Alice, but find the interloper also there. Chic tries his crocodile tears routine at first, but when that doesn’t work, resorts to swinging a knife. So Betty knocks him out. When he comes to, he’d tied to a chair.

There’s a lot of that going around, actually. Archie is undertaking his own parallel Black Hood investigation and heads straight to Mr. Svenson’s old house, because, like Betty, he’s had his doubts. Immediately, he meets a man in a black mask. Then there are two more and it’s clear this is a trap. The trio of masked dudes rough him up and the next time we see him, he’s–yep–tied to a chair.

It turns out that the trio comprises our old fiend Nick St. Clair and two randos that I guess are his friends. The plan is to hold him for ransom for $1 million, as Nick tells Veronica, and then just kill him, anyway, as Nick tells Archie. Veronica doesn’t have the cool million herself, so she asks her parents and what a shocker that Archiekins’s blood brother Hiram says nah. They also don’t want to get the police involved, lest they ruffle the St. Clairs’ feathers. It seems their crime is organized, too.

So Veronica gathers up the cash she can and meets Nick. Knowing that she doesn’t have the full ransom, he tells her that she can pay the rest off herself. Since he’s a goblin, I’m sure you’ve already figured out what he wants her to do. Instead, she roofies him (and later gets his parents to pay her a million dollars in ransom), while Archie busts out of his restraints and sprints like, miles to the “Five Seasons” where Veronica calmly stands over Nick’s unconscious body. Later, Archie will once again pledge his loyalty to Hiram, who will never give him a fraction of it in return. It’s all just a little bit of history repeating, so let’s go check in on the Coopers, shall we? 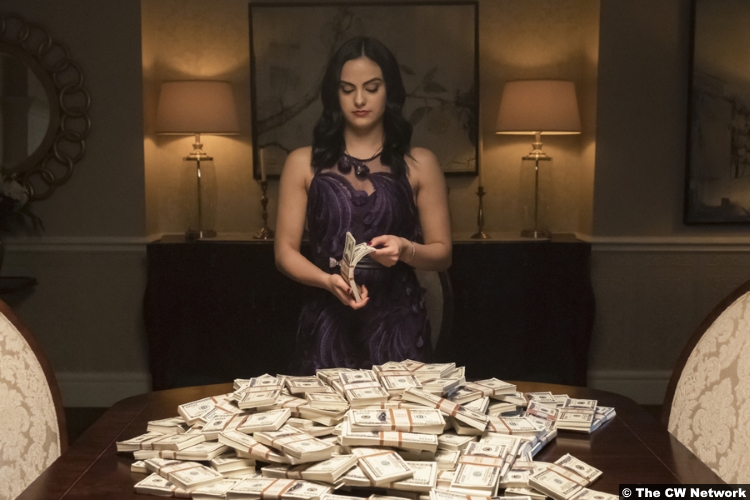 So Chic’s story now is that poor Charles came looking for his perfect family and was turned away by Alice (it sounds like she thought he was a door-to-door salesman). In his grief, he–hang on, let me get some tears going–overdosed on jingle jangle. 😭

Boy, I tell y’all. It’s been a day of high highs (THEY CAUGHT THE GOLDEN STATE KILLER) and not even bad lows (found out that due to a technical glitch, I wasn’t seeing any comments y’all left) and reader, I yelped when that line was delivered. Nothing gets me going like JJ.

Distraught, Alice beelines for FP, where she tells him that A) she had his baby and B) he’s dead now. This is, understandably, a lot for FP to take in at once. But take it in he does and he returns to the Coopers’ with Alice, where they find Jughead walloping Chic. FP hauls his son out of there and gives him one of those good ol’ FP speeches that always warm my heart.

Buuuut, while Alice was gone and Jughead was other occupied, Betty was just chattin’ with the Black Hood. He wants her to give him Chic, as he’s a sinner who has killed before. Since Jughead was unable to punch the truth out of Chic, he and Betty go to Chic’s last known address and ask the neighbors if they recognize Charles. One does, calling him the nice one. She thinks the “bad one” did something to him, because Charles disappeared and then Chic was getting rid of bloody sheets. 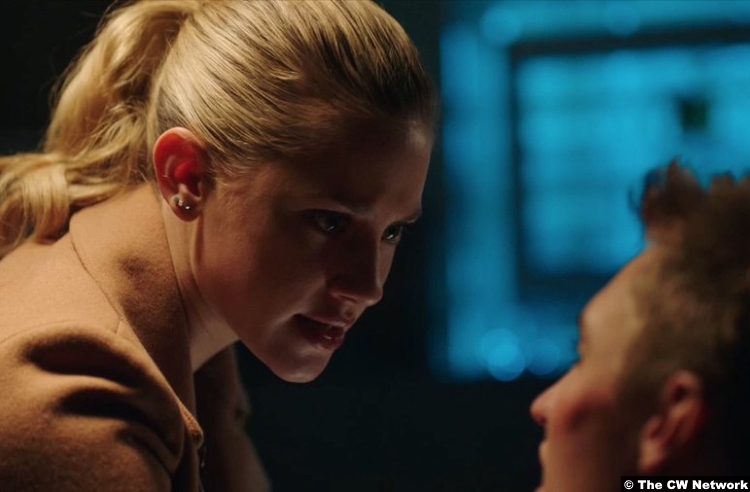 So once Betty is back home and Alice is distracted by Hal, Betty takes Chic to meet the Black Hood. Curiously, though, while we see the BH pursuing Chic, we don’t see an aftermath. We don’t see the Black Hood kill Chic or even catch him.

Of course, curiouser and curiouser is when Betty returns home and finds her mother alone. When she asks where Hal went, Alice says, “He went looking for you.”

Oh, did y’all catch the excuse Betty made up when she was on the phone with the Black Hood and Jughead asked if it were her mother. “Uh…no, it’s my dad.”

8/10 – Great God a’mighty, there was a lot going on in this episode. I admit, I was a bit distracted–I’m not sure if y’all have heard, but they matched someone’s DNA to the Golden State Killer’s–but overall, this was a fun, suspenseful return to the soapy highs the show can achieve. Stop giving me fake mafiosos and for-profit prisons–Cooper drama is where it’s at. In other news, Ethel did send those nasty letters to Cheryl last week, but she (probably) didn’t kill Midge. Also, the Riverdale view of what mobsters are like (Nick St. Clair–really?) is still fun. 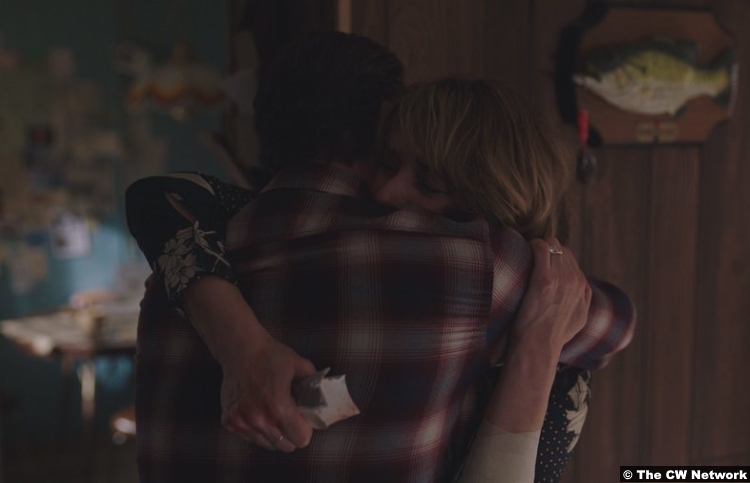