Riverdale S02E17 Review: The Noose Tightens – I died a thousand secondhand embarrassment deaths during it

Last week I wondered why anyone was still friends with Veronica. This week she strikes back with a counterpoint in which she does something that does not benefit her in any way. Yet. There’s always time to spin it. 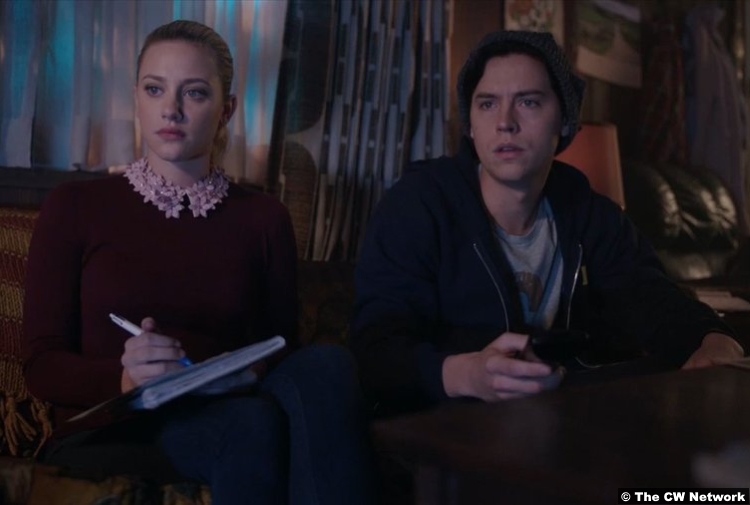 But first, before I dive into the couldn’t-care-less of Lodge Industries, let’s spend time with Bughead. Unfortunately, it’s not as sweet as usual, because they have a big problem. You remember that rando, Dwayne, who got killed in the Cooper home? (Although Chic is credited as the one who “brained” him, I’m not taking anything about him as gospel.) Anyway, as you also might recall, Betty and Jughead sunk Dwayne’s car in Swedlow Swamp. Welp, it has been discovered. FP and Alice tell their children not to say a word and act as if everything is normal. So of course, Betty and Jug immediately question Kevin. They frame it like they’re doing an environmental story about illegal dumping and they sound shaky as hell, but Kevin buys it.

The most important fact–the only important fact–they glean from the conversation is that the owner has already claimed the vehicle. Chic muses that Dwayne was always taking his girlfriend Darla’s car, so it was probably hers. Then he immediately ignores the FP/Alice mandate and goes to talk to Darla.

Meanwhile, we’ve still got the student council elections to contend with. In the presidential debate, Sweet Pea asks who’s going to be looking out for the new students from the Southside. You’d think the answer would be obvious (their fellow Serpent) but it seems the younger Serpents aren’t as keen on Betty as Jughead would like. In particular, they don’t see any reason to trust her, seeing as how her mother was a Serpent, ditched them, and then spent years pillorying them in the Register. 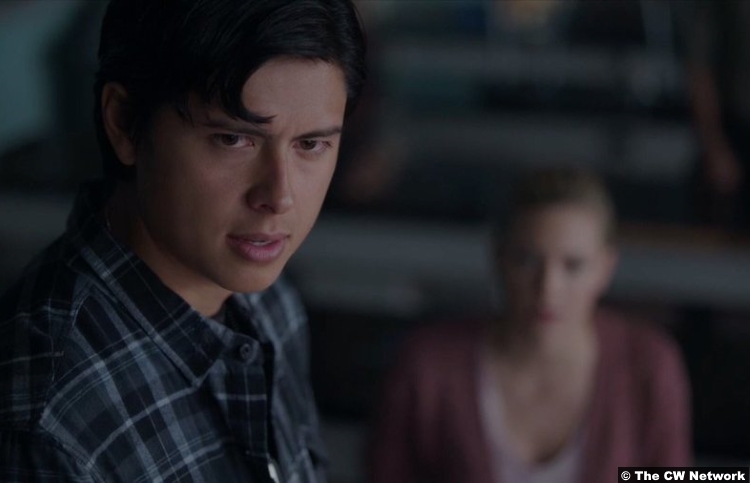 That comes out after the debate, though. During the debate, Archie brings up the prison plans, because high school kids love for-profit prisons. And Reggie, who’s running with Josie, is like, “As an alternative, we’re not high-strung maniacs.” Then he and Archie later arm-wrestle to see who gets control of the wrestling team vote. Sure. What, no time for a drag race?

And now the time I dislike the most. Hiram [SIGH] gets a visit from two of his mafia pals, Lenny and Carl. Wait, what? Sadly, I am disappointed. Anyway, their visit is basically a shakedown. They want a fourth of the prison profits, which will end up costing Hiram money. He politely says no, they politely threaten him–’cause what does he have for back-up, two dudes and a child?–and that child, Archie, steps up to defend him. He does so in a speech detailing his greatest tough-guy hits, like beating Nick St. Clair, and I’d transcribe it for y’all except I died a thousand secondhand embarrassment deaths during it.

The end result is that Still Not An FBI Agent Adams ends up betraying the Lodges and Archie gets the Red Circle back together–this time as the Dark Circle, as I live and breathe–to blow up Lenny and Carl’s car. Then the Circle delivers their message, in case the car wasn’t enough. It’s that Hiram isn’t alone (his family doesn’t count) and Riverdale is protected (is it?).

While that is assaulting my discomfort, Chic is bringing Darla home. She quickly sussed out why he was asking her about Dwayne, so she parlayed that into a threat. The Coopers give her $10k and she’ll walk away quietly. Otherwise, she might have to speak to the sheriff. Whilst Betty’s at the bank the next morning to make the withdrawal, Alice calls and tells her not to come home–there’s another person there. It turns out to be that guy Betty pepper-sprayed and boy, is he thrilled to see her. But Betty didn’t come home alone–she brought the Serpents with her. Their presence (and the money) is enough to scare the two hoodlums out. Thanks, Serpents! And this is before Alice apologizes to them for years of trashing them in the press and before Alice shows up at FP’s house when he’s alone. Hmm.

Now that we’ve covered all that, onto the most important part: Cheryl. Toni enlists Josie and Veronica to go to Thistle House with her to investigate Cheryl’s whereabouts. After all, if she’s really at boarding school, why is her social media dead? Penelope dismisses their concerns, claiming that Cheryl is actually at a mental hospital because she’s unwell. Then she produces the picture Cheryl sketched of herself and Josie, back when she was tormenting Josie to bring her closer. That’s enough to throw Josie off the scent. However, Toni later receives a call at school and it turns out to be Nana Rose! She tells her that Cheryl is close, that she’s with the “Sisters” and that’s all she gets out before Claudius pulls the phone line. 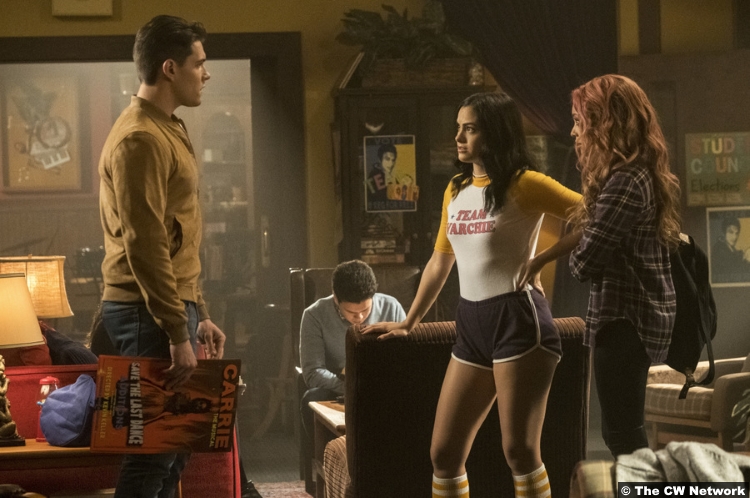 Veronica suggests that it might be the Sisters of Quiet Mercy, but doesn’t know anything about their doing conversion therapy. Kevin does, though. He says that it’s a dirty secret. He also says that the Sisters used to bootleg during Prohibition and used tunnels to smuggle out the hooch. Nowadays, boys stuck in conversion therapy use the tunnels to sneak out to Fox Forest. Toni and Veronica figure out they can use the tunnels to sneak in.

So they do that and although their mission inside is very loud and one would think, very noticeable, they somehow get to Cheryl before anynun notices. (I will not apologize for that.)  Cheryl is at movie night, where the kids are forced to watch 50s PSAs about the dangers of gayness. Toni bursts in, loud as anything, and kisses Cheryl. Then they get the h-e-c-k out of there. 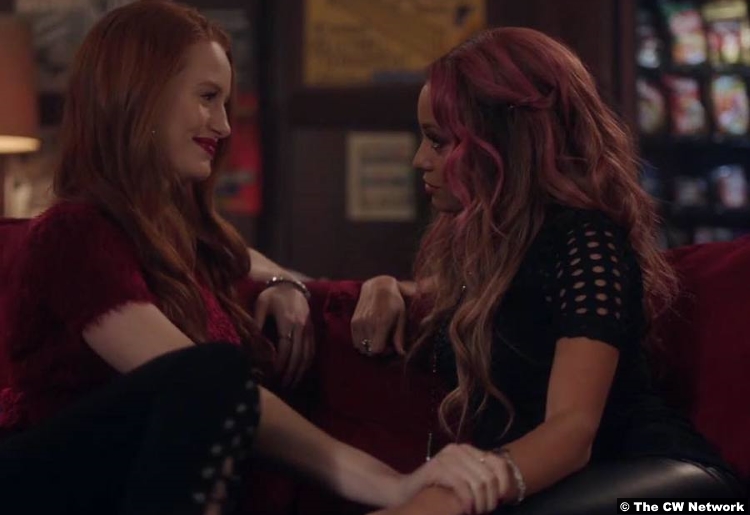 Afterwards, at school, Cheryl seems surprisingly okay after the ordeal she’s had. Then she approaches Kevin, who’s going to be directing the new school musical, Carrie (yes, the Stephen King one), and tells him that she’ll be playing the title role, because, “This school’s gonna burn.” Okay, so she’s not doing great.

8/10 – Are there some of you out there who are just living for this Hiram/mafia storyline? If so, please let me know your secrets. As for me, I don’t find Hiram nearly as compelling a character as say, Nana Rose, who crawled across the floor to phone Toni. (Now save her!) Or Fred. Archie turned the town upside down in a quest for vengeance after his dad was injured by the Black Hood, but now, he can’t even bother to attend his dad’s campaign announcement. As I said last week, he’s acting very out of character and it’s not clear why. I’m sure this Hiram thing is going somewhere, but can we get there already? It’s much more interesting (to me) to spend time with literally anyone else on this show. What’s Pop up to?