In the most shocking development of this week, if not all recorded human history, Genuine Official FBI Agent Adams turns out not to be who he says he is. I, for one, am floored. Also, that guy from last week is dead.

Looking back, we could have predicted the events at the end of last week by looking at the title of this week’s episode. If you’ve been negligent with your Poe, the story is about a murderer who’s haunted by his crime. While Betty had nothing to do with the (accidental?) murder of “Shady Man”–that is literally how the character is billed–her involvement in the cleanup still torments her. And that’s where we join Riverdale this week–right back in the Coopers’ bloody kitchen. 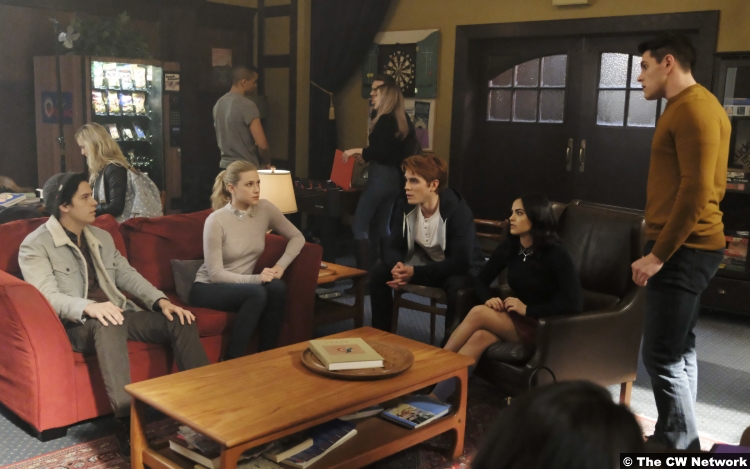 Alice is a little too good at body disposal, I have to say, but her choice of a dump site–a disused sewer pipe–is a bad choice. Too many variables, too easy for it to be found. And speaking of bodies being discovered, yon Papa Poutine’s is found. But no one really cares about that, besides Kevin.

Meanwhile, Ma and Pa Lodge are still dealing with the delivery of Pickens’s head and they’re all, this means war. Here’s a thought: maybe chill out a little and don’t go to DEFCON 2 over every slight? Thankfully, their child is more level-headed and suggests exactly the same thing. Well, specifically she suggests they have a sitdown with the Serpents and try to come to an agreement, which her parents go along with.

FP insists that the talk happens at the trailer park, so the Lodges can see the people whose lives they’re trying to upend. And speaking of the trailer park, because this show apparently knows I care about the legal accuracy, Mayor McCoy has the authority to issue evictions because the park is owned by the town. I assume they’ll answer my next question (This town ain’t got public housing?) next time. 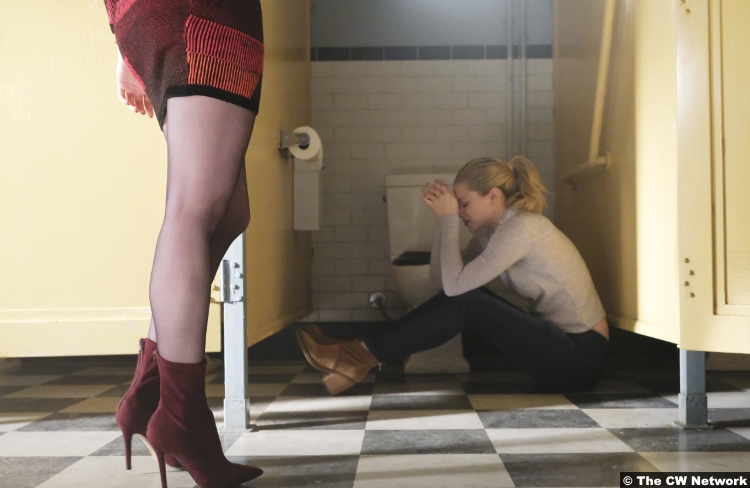 Anyway, the agreement goes off without a hitch, except that Hiram wants Jughead to can his planned article about the donations McCoy has been getting in exchange for clearing land for the Lodges. Is Jughead’s newspaper suspension lifted, then?

I think we all know Jughead well enough now to know that he will do no such thing. So the Lodges try a different tactic, outing the mayor’s affair with Sheriff Keller. Before they can do that, Veronica snitches to the mayor, who resigns. When Hiram asks, Ronnie denies that she said anything, but maybe that was Hiram’s plan all along? It’s probably a lot easier to sell investments in SoDale when the town doesn’t have a scandal hanging over it–a scandal, that ultimately, could have been investigated further and come right back to the Lodges. [See what can happen when it happens in real life.]

As for who would be doing that investigation, I guess…The Blue and Gold? Whatever happened to The Riverdale Register? I guess Hal forgot it existed when he started taking up with Penelope, a development that, in clinical terms, gives Cheryl the heebs. Seeing Betty vomiting in the school bathroom, Cheryl assumes it has something to do with Hal and Penelope, because why wouldn’t she? Most people’s first thoughts wouldn’t go to “Yeah, that’s an post-murder cleanup barf.” 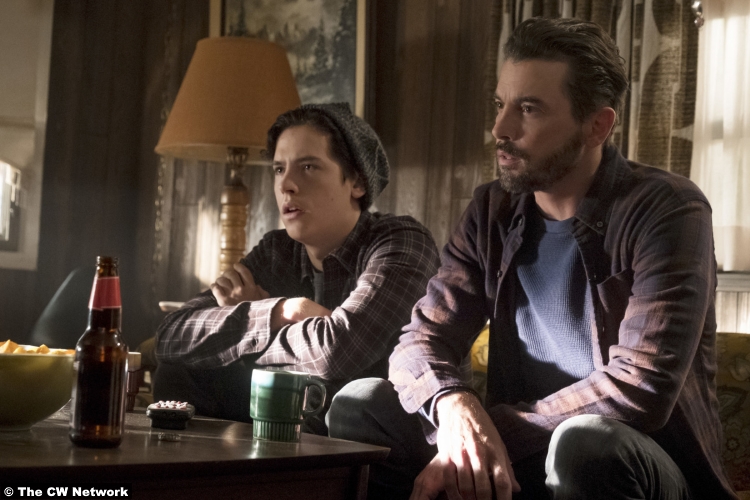 And speaking of the body, Betty does some of the dumbest shit imaginable, a feat in a town that is also home to Archie Andrews. First, she goes back to the dump site, where she’s unwraps the body and picks up Shady Man’s ringing phone with her bare hand. Then she takes the phone with her (!) to Pop’s (!!) where she sits in a booth, going through the messages and calling everyone (!!!) My head explodes, Scanners-style, and Shady Man’s apparently a drug dealer, but…so what? Who cares?

Oh, Betty cares. She cares that Chic lied and said he was a client, but Alice defends him as he pretends to burst into tears. The Coopers are really wearing me out this episode. Thankfully (???), they spread their bad mojo around. Specifically, Betty spills it all to Jughead, who helps her dump Shady Man’s car, which no one has noticed sitting outside the Coopers’. Then they all enlist FP, who moves the body, buries it, AND covers it with lye. There is not a gift card in the world big enough to cover something like that.

But speaking of cover-ups, it’s time for Bona Fide FBI Agent Adams. This week, he’s questioning Archie again about the unlamented death of Papa Poutine. Archie, somehow, miraculously comes up with a story about Poutine owing money to another gangster, a one Lenny DefinitelyNotHiramLodge. When Adams discovers it’s bunk, he threatens Archie via threatening Fred (for hiring undocumented Canadian employees–so much Canadian crime on this show).

So Archie does what could be a dumb move–going to Hiram and confessing (almost) everything–but might be his only play. Hiram says he’ll be in touch.

Later, Andre, the Lodges’ driver and jack-of-other-trades, picks up Archie, ostensibly to take him to see the boss. They sail right past the Pembrooke, in a scene that’s supposed to be tense, but c’mon. As I’ve said before, they’re probably not going to murder Archie Andrews on this show. So when we get to the meeting place, it’s not a shock when that doesn’t happen. Unfortunately, neither are the other revelations–Hermione’s the boss who sent for Archie AND who hired Faux Agent Adams to test Archie. I’m sure my reaction is supposed to be something like “OMG!” and the creation of at least one hashtag. Instead, it’s more like, “I mean…I guess?”

7/10 – This episode was a mess. What more can you say? I understand she’d just gone through something traumatic, but still. Betty was uncharacteristically dizzy in this episode and it was painful to watch. And as for the ending, it came with a whimper, not the bang they were surely betting on.

But hey, we’re not done with the season yet. Join me back here after the Olympics hiatus and we’ll see what trouble they manage to get into then.