Riverdale S02E12 Review: The Wicked and the Divine – I’m always a sucker for the FP moments

So as it turns out, the tutelage Hiram offered Archie mainly comprises young Mr. Andrews being a gofer. He’s fetching dry-cleaning, take-out, etc. This is all, of course, part of an effort to get closer to Hiram so he can find out information for Totally Real FBI Agent Adams.

This week’s big event/excuse to get the whole cast together is Veronica’s Confirmation. According to my extensive research (googling “Catholic confirmation how old”), the Church has deemed that Confirmation is appropriate for people ages 7-16, so as to why Veronica hasn’t been confirmed already, maybe they were waiting for Hiram to get out of the pokey?

But before the big event, we still have the manner of General Pickens and his missing head. The town authorities are really going hard on the Serpents to get to the bottom of this. Or the top, I guess, since it’s a head. Anyway, to that end, Sheriff Keller keeps coming by to question FP and Jug like they’re suddenly going to be like, “Oh! The head! Yeah, we took that.” 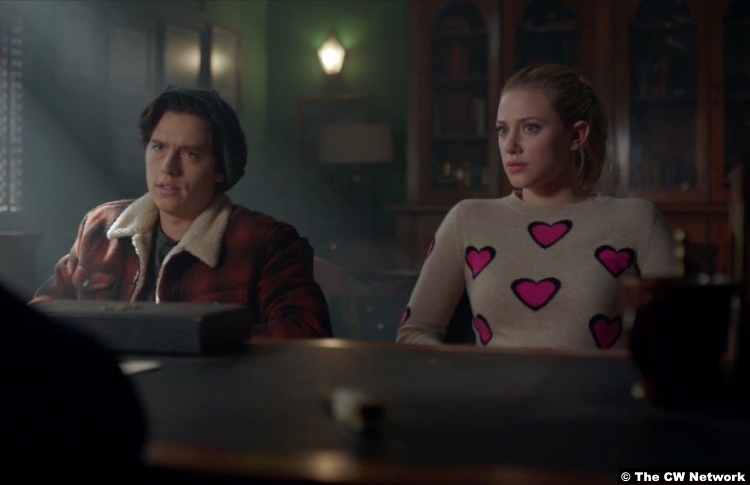 And that’s not the only friction they’re getting. The Lodges threaten to sue because of defamation in Jug’s article in The Blue and Gold, so Principal Weatherbee suspends Jughead and Betty from the staff. Okay, but…are there any other staff members?

Then everyone in the trailer park receives eviction notices on orders from the mayor. Does she own the park? Because otherwise, I don’t see how she has the legal authority to do that.

Look at me, asking questions about logic when there are much better questions I could be asking. Like, what’s less appropriate, performing a strip tease to “Mad World” or singing “Bitter Sweet Symphony” at your Confirmation? That last one is indeed Veronica’s choice, but because of political expediency, the Lodges ask Josie to duet with Veronica. Okay, but…is the church cool with this? Like, have they read the lyrics? “Well, I’ve never prayed, but tonight, I’m on my knees, yeah”? Not to mention the fact that Veronica bills it as the song “from Cruel Intentions,” in which it’s played after a character snorts coke from her stash rosary.

But I’m not Catholic, as my earlier googling should have indicated, so maybe it’s all a lot more progressive than I realize. I doubt it, though.

Meanwhile, Hiram is predictably impressed that Archie beat up a guy in leg casts. So much so, that he invites Archie essentially to be a butler at Hiram’s regular poker game, which attracts ne’er-do-wells from all parts of the North American crime world. So Real It Hurts Agent Adams wants Archie to wear a wire, which just sounds like the quickest way for this operation to go sideways. For a change, Archie does the smart thing and refuses. 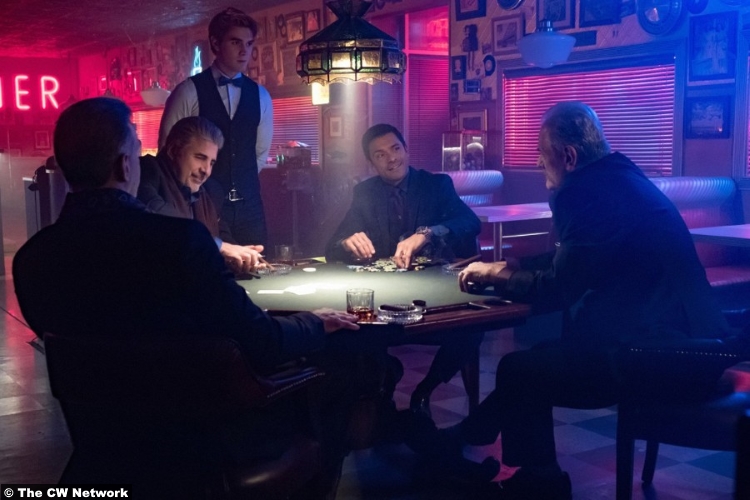 At the game, the players include a Québécois gangster who goes by Papa Poutine, which sounds like a mob name you’d come up with if you had only a few seconds. “Yes, I’m a fixer out of Philadelphia. They call me Doc…Cheesesteak.” There’s also a guy who runs breweries, but he doesn’t have a fun name like Mr. Hops. But we’ll call him that, anyway. And anyway, Archie is unclogging the toilet–what a glamorous job this tutelage is–when he hears voices outside the window. He eavesdrops by looking directly through the open blinds at Poutine and Hops, who are discussing Hiram. He’s weak and he needs to be taken care of, preferably right after the Confirmation. I smell a spa day!

Because Archie is Archie, he waits until the reception after the Confirmation to tell Hiram about this. That’s also when Jughead and Betty leave because they’ve gotten a nibble on their fliers. You see, they them up asking for info on the Pickens head, because not only is there the semi-manageable friction to deal with, but also Penny has reappeared. And she’s out for blood. Specifically, Jughead’s poisoned blood, which it will be if she gets her way. In exchange for helping the Serpents with the evictions, she wants Jughead de-Serpented in all the ways–kicked out of the club and relieved of his tattoo, the latter of which she wants to do herself, with a rusty knife. Yikes, ma. 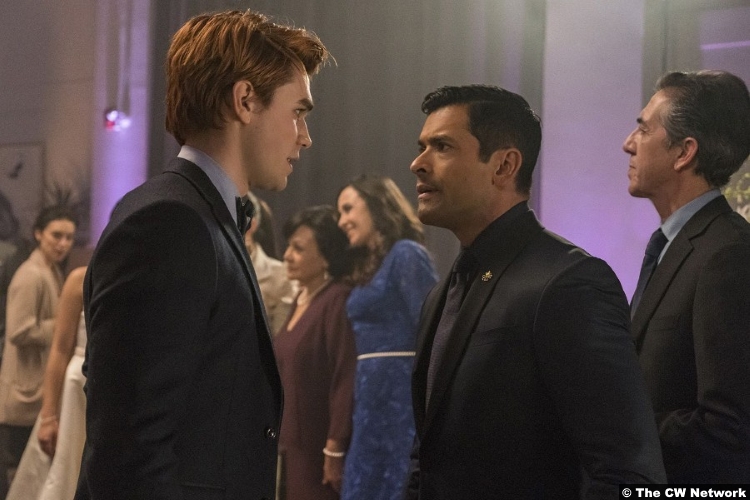 However, when Jug and Betty answer the call, it’s from a scrapyard owner who’s found the head. He hadn’t noticed anyone around, really. Except for the one guy. In the Serpent jacket. Who was real tall.

So FP, Jughead, and Betty bring the head to the Whyte Wyrm, where Tall Boy is questioned. He says that Hiram hired him to steal the head and cause chaos, which he did enthusiastically, because he wants Jughead out, too. He wants all the power! But all he gets is exile. As for the head, it’s delivered in a box to the Lodges. As soon as Veronica remarked on the size of the gift, I was like, “It’s a head.” But I expected it to be a real head, so we all got a surprise.

Meanwhile, Betty did start webcamming, with someone who sounds like they’re using the voice changer from Scream, but we get only a brief glimpse of it. Chic does get a couple of unsettling visits tonight, though. One is from Ben (Moses Thiessen), the kid who Ms. Grundy picked up with after Archie. Even though he’s in a robe, Chic says that was about a job at the Bijou theater.

Later, another dude stops by looking for Chic, when he and Alice are having dinner. Chic is clearly not thrilled about seeing this guy, but although all my danger synapses light up, we leave the moment until later, when a post-coital Betty* returns home. Her afterglow is immediately canceled when she finds Alice trying to wipe up a lot of blood next to that guy’s body. It’s going to take a few more paper towels than that, ma’am.

9/10 – This was a fun night and not just because I got to make up names for gangsters. Just when we thought all the drama and danger were going to depend on Hiram’s (quite frankly, boring to me) gangster antics, Alice comes in hot with the violence. Sure, Chic could have done it, but…you know it was Alice. Maybe I’m wrong, but that just feels like something a parent would do. And speaking of parents, FP’s speech to Jughead about mutilating Penny was a heartbreaker. I’m always a sucker for the FP moments.

*Congratulations, Bughead fans. I suspect the webcamming and the kissing Archie will come back to spoil everything, but for now, it’s good.