All through this episode I kept wondering, why is anyone still Veronica’s friend? She may believe that her work with her parents is a softening influence, but at the end of the day, she’s still doing their bidding.

And it looks like people are starting to cotton on to that. To wit, as plans for the prison go full-steam ahead, not everyone is on board with them. In fact, nobody really is, save Archie. In the most memorable example of opposition, Ethel gives Veronica a face-full of a Pop’s shake. (If you’ll recall, Hiram was the reason Ethel’s dad lost his business, a loss that preceded his suicide attempt.) 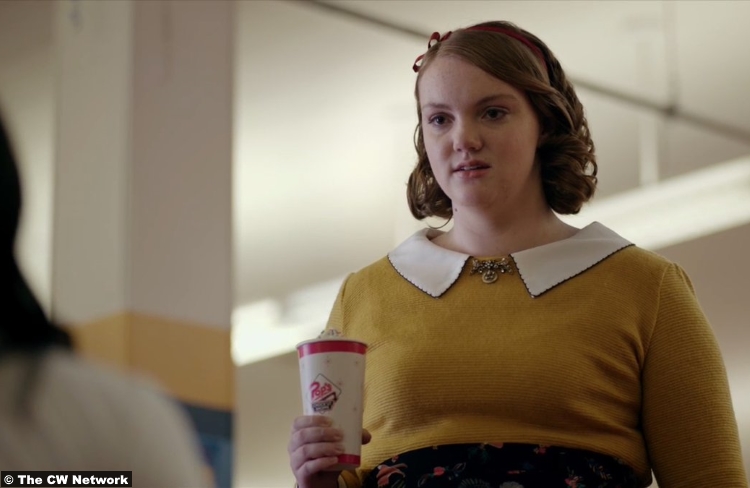 When we last saw Ethel, she and Veronica were on good terms–Ethel even said that Ronnie wasn’t responsible for Hiram’s actions–so you might be wondering where this is coming from. Well, Ronnie promised to make amends and then just…didn’t do anything.

Reggie, who’s running for student council president, also gets in on the taunting Veronica action. He suggests that Hiram might be the first resident of the prison, which, I’m not sorry, is hilarious. Veronica doesn’t think so and disagrees with her fist, before announcing her own candidacy.

She also tries to get Hiram to offer Mr. Muggs a job at the prison, which he does not agree to, but that doesn’t stop her from telling Ethel it’s a go. This is while she’s promoting her campaign at her cupcake-and-a-kiss booth. A) That is not a thing and B) Boy, nothing gets my vote like day-old cupcakes and a platonic smooch.

Veronica doesn’t understand why Ethel is still against her–after all, she promised her dad a job. But that’s just the thing: Veronica is promising things, but all she’s giving people is thoughts and prayers. Meanwhile, her parents are actively doing things. Actively ruining people’s lives, that is. 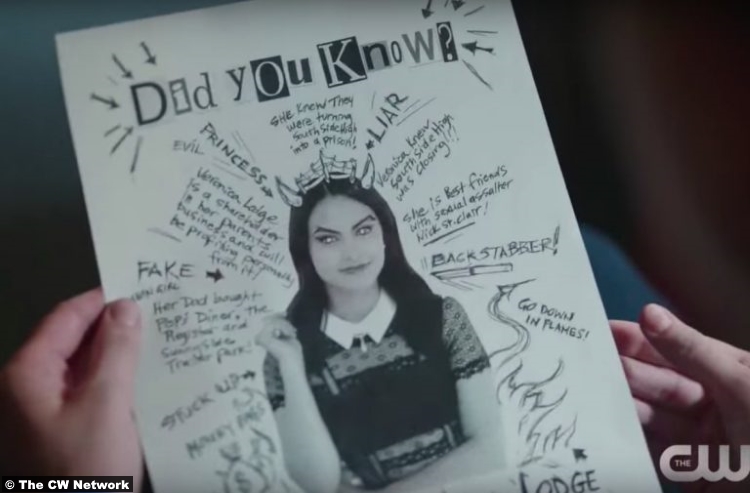 And it’s not a secret. So when Ethel distributes a flier revealing that Veronica knows all about her parents’ machinations, I don’t know why it comes as a shock to anyone, especially people close to her, like Betty. Just ten minutes ago, you were mad at her because her parents were buying the Register.

But Betty is under a lot of stress at home, what with living with whatever Chic is, so we’ll let that slide. As far as Chic’s real identity goes, although it’s confirmed that Hal is not his father, his actual paternity is still a ~mystery. (Lol, it’s FP.)

And speaking of, he’s already got one wayward son to deal with, as Jughead organizes the younger Serpents into chaining themselves to Southside High to prevent its demolition. Their stand ends when Hiram encourages Archie to get the wrestling team together to cut the chains. And again I must ask, why? Archie is turning against his friends and his own parents for what? I just cannot see what shiny bauble Hiram is hypnotizing him with.

I mean, I get that he sees Hiram as a powerful man, a man, again, of action, but…who cares? Not all actions are good ones, like when they’re hurtling you off a cliff.

His simple (ha) explanation is that Hiram has a vision for Riverdale. Sure, but he’s not the only one. It turns out that Fred Andrews also has a vision. And now that Hiram has released him from their contract–a reward for Archie’s little stunt with the wrestling team–he’s free to pursue it. To that end, he’s also running for mayor. 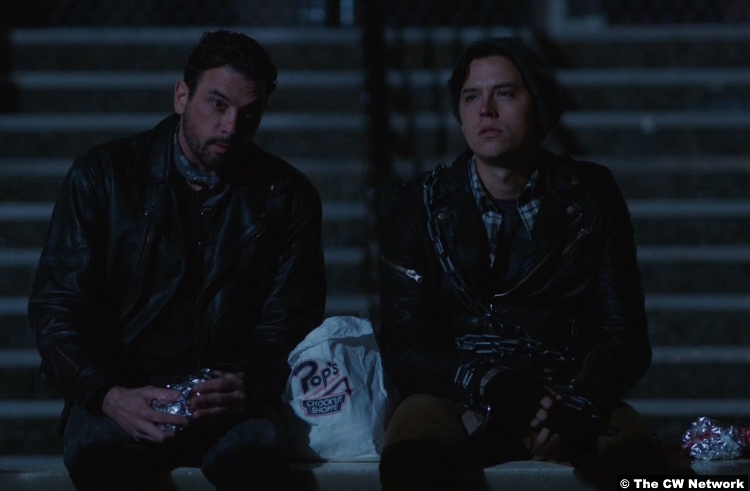 But Hermione is not the only Lodge who is now facing a tough campaign. Jughead decides to throw his iconic hat into the ring, with Betty at his side as co-president. The show presents this as if it were some question as to whether she would run and/or whether he would fulfill the favor she asks for in return–staying at the trailer so that she can avoid Chic. First of all, Betty is ride or die and we know this because it took her this long to get mad at Veronica…again. And second, like Jughead would say no to that.

Unfortunately, while all this other drama is going on, no one is really paying attention to Cheryl, who really needs it. I know she’s the girl who cried wolf when it comes to attention, but this time, the wolf is here. After Nana Rose takes a spill from her wheelchair and the doctor reveals she was poisoned with a paralytic Penelope just happens to grow, Cheryl sadly makes the classic thriller movie mistake of confronting the tormentor with her suspicions. Penelope will later tell Toni, literally the only person checking for Cheryl, that our favorite scarlet starlet is off at Swiss boarding school, but it’s clear from the mother-daughter conversation earlier where exactly the junior Blossom is headed.

And that’s the heartbreaking image with which we’re left: A pig-tailed Cheryl locked in a room at a sanitarium, about to be dosed with God knows what in preparation for her “conversion.” And I’m just going to say, before the storyline even really kicks in, the show cannot pull this off. But we’ll see.

7/10 – Despite a cameo from Andy Cohen (as a close personal friend of Hermione’s) and a lot of drama, this episode was a little frustrating. Most glaringly, Archie’s motivation doesn’t make a lot of sense. Sure, hitching his wagon to Lodge Industries could gain him power, but Archie’s never been depicted as the kind of person who would be out for power at any cost. Maybe he’s running some kind of long con, but…c’mon. This guy? Thank goodness his mother is back in town and she is HEATED over his disrespect for his father–you know, the man who keeps him housed and fed. I know Archie has been shown to be easy to manipulate–Ms. Grundy, ahem–but at some point, he’s got to get literally any kind of notion. Also, I get that the show wants us to feel bad for Veronica, but she made this bed.

Also also, please will someone look for Cheryl? Besides just Toni.