Riverdale S02E15 Review: There Will Be Blood – Chic, who’s your daddy?

When this episode began, it seemed like it was going to be just a filler episode. The Lodges are trying to pressure someone into doing their will, while Jughead tries to expose the Lodges’ sins. Then a dead man showed up.

He turns out to be not who we think he is, but someone else does, too. You: Salome, what?!

Okay, we’ll get to that. But first, the Lodges. Their latest plan involves Fred running for mayor in the special election to replace Mayor McCoy. On its face, this plan seems pretty clear, as in, the Lodges want a friend at city hall, someone who will ideally turn a blind eye to whatever they’re up to. But of course, that’s the thing–what exactly are they up to? We know they’re buying up properties all over town, but to what end? 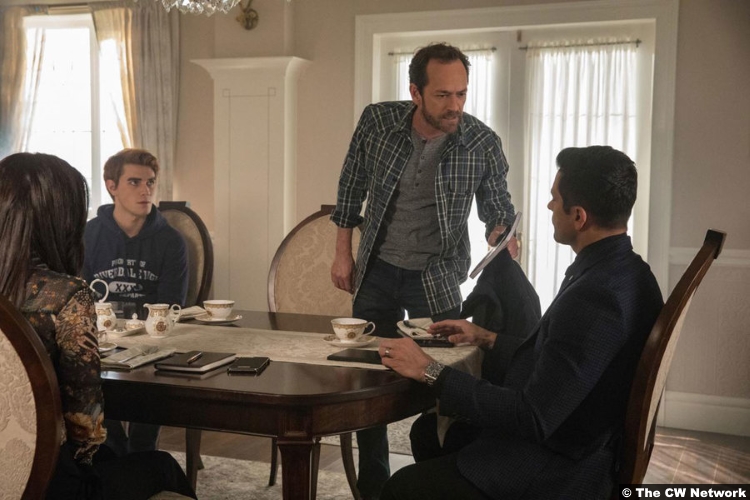 That’s the question Jughead desperately wants to answer, especially after Archie tells him about Hiram buying Pop’s. Unlike the other properties they’ve bought–the drive-in, Southside High, the trailer park–Pop’s is right in town. It’s considered a jewel of Riverdale. People will care about that. So how does it fit in?

Let’s pump the brakes on all those questions for a moment and get familiar–and familial–with the other family dramas in town. Over at Chez Cooper, Polly’s come home to visit with *cough* Juniper and Dagwood in tow, much to Betty and Alice’s delight and Chic’s increasingly creepy consternation. Betty doesn’t understand why he’s so territorial and weird all of a sudden [me: all of a SUDDEN?!], so she enlists Kevin to catfish him on video chat. Betty’s admission that she both has a plan and knows it’s nuts is basically her mission statement. Anyway, they don’t find out much.

What she does find out at home, though, after Hal asks Alice for a divorce, is why exactly Polly has returned from the definite cult she was in. It turns out that it’s time for the reading of Clifford Blossom’s will, which he stipulated should take place after any police investigation into his illicit side business had finished, because of course he did. 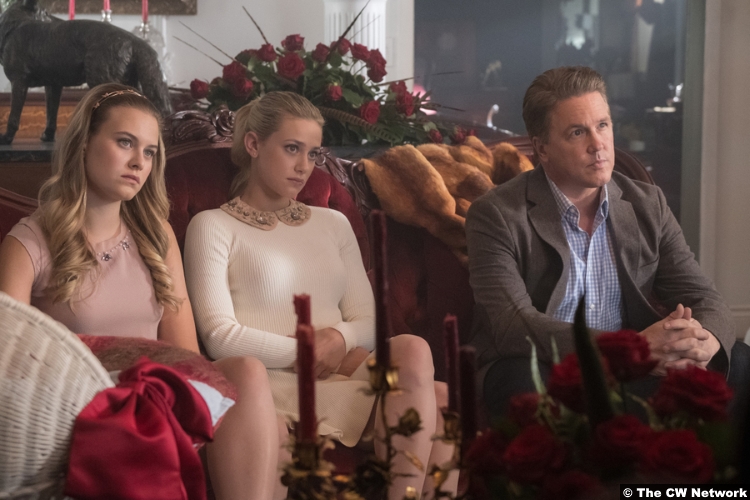 The probate of the will is pretty simple. His mom will keep her house, Penelope will keep the charred ruins of her home, and the money will be distributed evenly. Half of it will go to anyone in town who can prove they’re a Blossom (hey, Coopers) and half will be split between his heirs. So Cheryl gets that full half. And Alice figures out that Hal is asking for the divorce now, so he can cut Alice out of any inheritance he receives from Clifford’s estate.

Alice is escorted out of the will-reading and Cheryl gives a speech about how she wants the terrible history of the Blossoms to end. No more murder, no more evil. “Sounds great,” says an entering CLIFFORD BLOSSOM. !!! Cheryl faints.

Except no, it actually isn’t Clifford. It’s his twin brother, Claudius. Beg pardon while I laugh for like, a full minute. Anyway, he says that Clifford was afraid that the Blossom curse would come for them, too, so he encouraged Claudius to leave. Claudius has been working as a Merchant Marine ever since then, but now he’s back to stay, at least for a little while. Later, Cheryl will overhear an ominous conversation between her mother and uncle that seems to target her and her grandmother, because of course the older Blossoms are not interested in becoming good. 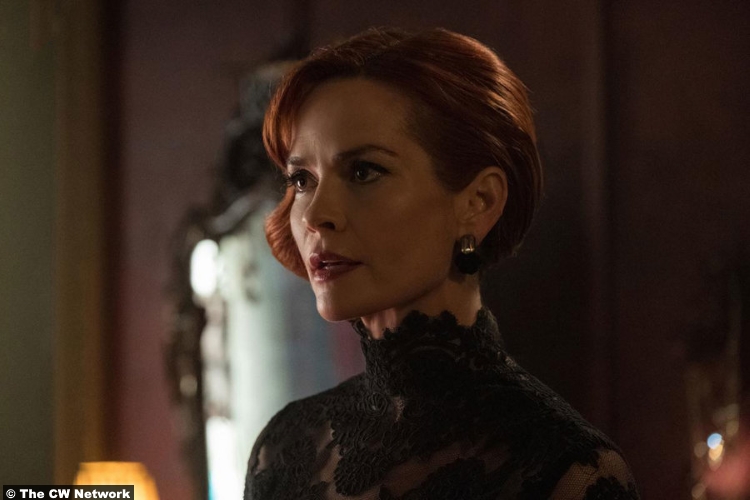 Also not interested in being good? The Lodges, of course. It turns out that their grand plan is to turn the grounds of Southside High into a for-profit prison and the rest of the property they’ve bought will be used to house prison employees. This is the last straw for Fred, so he’s out of the mayoral race. And you might think that his son would follow his lead, but nope. Instead, he becomes blood brothers with Hiram, because of course. And Hermione throws her (expensive) hat in the ring for mayor. Why? Because of course.

And speaking of blood, in our final “because of course” of the night, Chic has been hesitant to give any of his up to be tested for Blossomhood. There are any number of reasons why he might balk at that, including the fact that Chic’s a big ol’ weirdo, but then again, there’s the because of course. Betty steals some floss from his bathroom trash and gosh, his poor gums, because apparently there was enough blood to collect a testable sample. [Extremely Maury voice] The lab results determined Chic is…I’m sorry, this just says “not who he says he is”? Betty, was the sample tested only against Blossom blood, ie, your dad’s? So it said that Chic is not a relative of your dad’s? Do you see where I’m going with this, Betty?

8/10 – Like I said, at first this seemed like it was going to be another humdrum episode, full of junk I don’t care about re: Lodge Industries. And while that stuff is still a snooze, the family intrigue more than made up for it. What do Penelope and Claudius have planned? How delightfully bonkers was it to have a secret twin show up? And Chic, who’s your daddy? I look forward to finding all this out, especially since hashtag CHONIISUNBROKEN.