As we look forward to the new year’s movies it’s customary to look back on what the year before has brought us. In terms of movies, the year brought a lot of trash, some mediocrity, and a scant few true classics. Here are the fifteen best-reviewed movies of the year, as scored by yours truly and arranged from least-best to bestest-best.

REVIEW: RALPH BREAKS THE INTERNET is a solid sequel with heart

A solid sequel that delivered good heart and laughs but probably won’t end up as timeless-feeling as the original.

REVIEW: Black Panther is a vivid and fresh take on the superhero formula

Gorgeously designed and sharply directed. Bonus points for featuring one of the more captivating villains in an MCU film.

REVIEW: Hallowen (2018) tells nothing but answers so much…

On the one hand, it’s just yet another sequel/reboot, but it succeeds by being so well constructed. This movie knew its audience’s expectations, met them in places and exceeded them in others. It didn’t try to do too much that was new or edgy or different for the sake of it, but it also wasn’t so derivative it was boring. Jamie Lee Curtis’ sole performance was probably the difference-maker.

Ant-Man and the Wasp

REVIEW: Ant-Man and the Wasp is the best grandma ever

With the first, I went in looking only for competence. Marvel was on a roll at that point and I just didn’t want to see Ant-Man screw it up. I wasn’t looking to be overwhelmed; I just didn’t want to be underwhelmed. A good old fashion whelming was all I needed and, surprise, the movie ended up exceeding my expectations. By the time the sequel came along the MCU had been on such a roll my baseline level of expectations naturally had increased. I expected something better than it should have been, considering the circumstances (it’s the comedown movie after the biggest MCU movie yet), and, surprise, it exceeded expectations again by being a really fun, occasionally hilarious movie in its own little sub-genre of the MCU.

Teen Titans Go to the Movies

REVIEW: TeenTitans GO! to the Movies is best DC film since the last animated one…

Man this franchise has a ton of detractors. There’s a huge segment of the DC fanbase that continues to be furious over the cancellation of the teen-rated animated Teen Titans show. Teen Titans Go is as far from that as you can get: The animation is cartoonish, the tone is mocking, and the jokes are more akin to Spongebob than the wry humor usually found in DC properties. I had no preconceived biases against the show’s big screen adaptation so I might be in the minority in loving it. It was cheesy, dumb, silly, and sometimes really really clever with its humor.

REVIEW: Deadpool 2 does it again

It made a shade under what the original brought in, which makes it a disappointment to analysts and pundits, but I’m looking at this franchise as a happy accident that had no right ever getting made. Everyone involved is playing with house money here and the fact that Disney has now bought the rights to the character means this is probably the end of the character, at least as we know it. Even if they allow an R-Rated Deadpool movie to happen, Disney will certainly insist on some restrictions. That being said, Deadpool 2 might have been a bit more bombastic than the smaller, indie-feeling original, but if this is it for him, then what a way to go out.

I’m still a little shocked how much I enjoyed this movie. I suppose I should know better than to underestimate James Wan because so much of what I loved can be traced back to the Conjuring/Fast & Furious director. The obvious Raiders of the Lost Ark inspiration reminded me of the 1999 Mummy movie (another film that ought to have been bad but ends up being too fun to hate) and Wan’s masterfully-designed set pieces and ability to rein in Jason Momoa’s worst tendencies make him the best directorial hire WB/DC has made since Christopher Nolan. 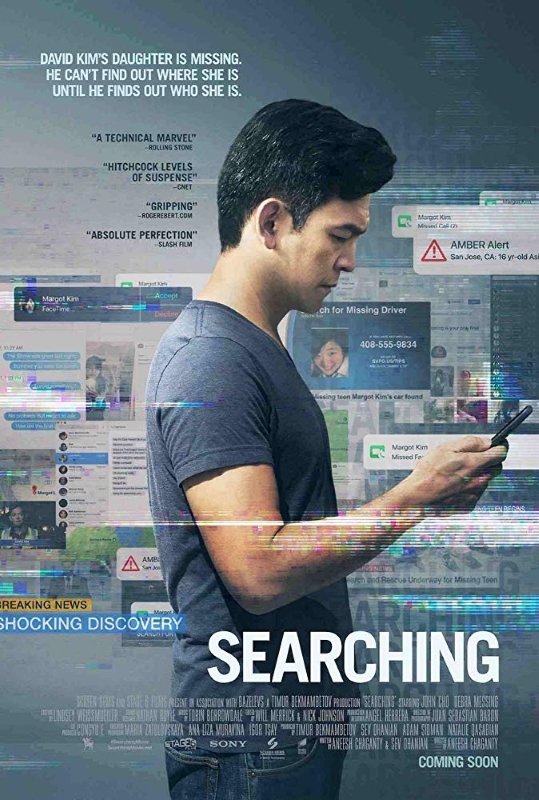 Every year I write one of these I always end up including a movie I didn’t get to review. As a matter of fact, I almost included Bad Times at the El Royale in this list but it just missed the cut (it would have gotten a high-8, maybe a 9). Searching, however, deserves mention as it was one of the best mysteries I’ve seen in years. The fact that it was shown entirely through “second screens” is just a bonus, despite how that could have been a gimmick that ruined the whole feature. The movie is one of the few to use the internet and technology in a way that was realistic, reasonable, logical, and practical. It also was tightly written with some really fun twists in the story. I missed it when it first came to theaters but I caught it recently and loved it. It’s only drawback was some clunky line-readings; other than that this is highly recommended. If you can find it, watch it!

REVIEW: ANNIHILATION is simply mesmerizing (with or without spoilers)

Every so often a sci-fi film comes along that bucks all the modern trends and offers something that can almost fool you into thinking the genre can still succeed on film in its old, heady, form. Unfortunately, the box office numbers that this movie produced will probably give studio execs cold feet to spend money on mid-budget science fiction films, but at least we’ll always have Annihilation. The film is gorgeous, smart, haunting, thrilling and mysterious. It’s the love child of Event Horizon and 2001: A Space Odyssey and everyone who claims to love the genre (real science fiction, not “space action”) needs to seek it out.

My favorite horror movie of 2018 worked because it laid out a very specific set of rules and meticulously followed them. If you want, there’s a thousand little holes you can poke in the movie’s universe, but just in terms of the bubble in which this story is presented, John Krasinski (who directed and co-wrote) put obvious care into making everything logical. I appreciate that kind of attention to detail. Oh, and the story and set pieces are great too. Craft a good movie, put some respect for your audience into your work, and do something unusual with the genre (in this case “make a horror movie where no one can scream”) and you’ve got the recipe for something special.

REVIEW: First Man is as emotionally powerful as it is visually stunning

Unfortunately hindered by a loaded release weekend and a stupid non-controversy controversy about the American flag, Damien Chazelle’s follow-up to La La Land was never appreciated the first time around. Maybe it’ll find a second life on home video, but that’s unlikely; movies like this don’t usually develop a cult following after the fact. It’s a shame that the movie will probably be entirely forgotten within a year because, for my money, it was incredible. Poignant and thrilling, though not in the ways Hollywood films usually are, First Man deserved better.

REVIEW: Hereditary is the best horror movie since The Exorcist(!)

On the other hand, here’s a movie that probably will develop a nice little cult following in years to come. It’s not exactly The Conjuring; the scares are more cerebral than “boo!” but as a throwback sort of horror film akin to Rosemary’s Baby or The Exorcist, it’s on par with those classics. There’s an unsettling feeling that permeates the film’s first two acts before things go bananas in the finale; that slow ratcheting up of dread before the bottom falls out is, to me, more effective than something jumping out of the shadows every three minutes to scare (but never effectively hurt) someone.

Spider-Man: Into the Spider-Verse

REVIEW: Spider-Man – Into the Spiderverse is…spectacular

A good trailer does not ensure a good movie, nevertheless, the trailer for Into the Spider-Verse at least promised the film would be visually stunning. When the film finally released it was a wonderful relief that everything else lived up to the hype generated by the remarkable animation. The movie is modern, funny, emotionally gripping and…for lack of a better word, “cool.” It’s easily the best animated comic book film ever produced and is probably a top-fiver comic book movie entirely.

A Star is Born

REVIEW: A Star Is Born is a masterpiece by a pair of first-time stars

As a directorial effort, Bradley Cooper amazed. As a male lead, Cooper wowed. As a female lead, Gaga stunned. As a soundtrack, both Cooper and Gaga were incredible (it’s Gaga’s best album since The Fame Monster, in this fan’s opinion). The legacy of this movie is legendary; it’s basically Hollywood’s go-to original work to remake every generation or so.  The movie succeeds in a way the previous versions did not. It betters the original thanks to its soundtrack. It betters the ’54 version thanks to the rawness of the lead performances. It far outshines the ’76 movie because it stays grounded, is more sincere, has better singing and music, and has an ending that will bring chills and tears in equal measure.

The older I get the more effectively movies are able to tug my heartstrings. I saw a few films in 2018 that brought a tear or two to my eyes. A Star is Born wrecked me, however. It’s a film destined to be rewatched and wept-over for years to come. Cooper and Gaga did such an incredible job, in fact, they may have killed the series. I can’t imagine another movie based on this story getting made that could ever top what was done here.

The fact that Infinity War managed even to reach the highest of high expectations it was drawing is a remarkable achievement. Arguably no sequel or franchise-movie has had such a high bar, except for maybe The Phantom Menace (which failed to reach it) and The Force Awakens (which, in my opinion, reached its bar but no more). Infinity War did not just reach its bar, however, it blew past it, delivering a movie that managed to satisfy every longing by fans while also offering more surprises and twists in the story than anyone one could have predicted.

Infinity War is maybe not the “best, tightest and most perfectly fine-tuned” MCU movie; that honor still belongs to Winter Solider. What it is is a cinematic achievement unlike any other. It’s the rare bird film that meets and occasionally exceeds its hype, does things that you’d never expect or even imagine, has fun, has heart and has heartbreaking drama.

Those are my favorites from last year. What are yours? Let us know in the comments below.

Here’s to 2019 and a ridiculous slate of films to come!