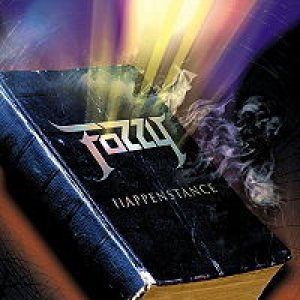 I am of course, talking about Chris “King of the World” Jericho. Not content with all his accomplishments in sports-entertainment, Jericho has teamed up with Stuck Mojo to form “Fozzy”, a Spinal Tap-like band who are already making waves around the world. Having released their debut album “Fozzy” to fair success, they are back with whats sure to be an even more successful collection of songs, known as “Happenstance”. Being the Jerichoholic fan that I am, I managed to get hold of the CD and listened to the album, and I can truthfully say I wasn’t disappointed.

The music is 80’s Heavy Rock. That fact cannot be disputed. And if they had have released this album back then, I have no doubt that it would have been huge. In today’s music industry, it seems a little out of place, but that doesn’t diminish the bold voice of Jericho and the hard, rocking guitar sounds from the rest of the band. The eerie church-like music of Whitechapel 1888 set the tone for the already most well-known Fozzy song (thanks to the famous RAW performance from the band), “To Kill A Stranger”. With its heavy guitar rift and Jericho’s bold, booming voice, this song is easily joint contender for the “most rocking song on the album” award.

Happenstance follows, with a slower beat that still manages to draw you in closer to the heart of the band. “Freewheel Burning” and “Mob Rules” speed up the tempo and will have you bopping your head up and down. “Big City Nights” sounds most like a true 80’s classic Rock song, and Jericho’s voice suits it really well. “Crucify Yourself” sounds more modified, and sounds almost 90’s like. The chorus build-up almost sounds like a Slipknot chorus, except Jericho isn’t screaming his lungs out for no reason. “L.O.V.E Machine” has a great beat and the most catchy chorus: “L O…V E, all I needs my love machine-o!!!” (Obviously he loved his mick-take out of Dean Malenko a bit too much)

Remember me saying that “To Kill a Stranger” was joint contender for the “most rocking…” award? Well meet the other contender: “Balls to the Wall.” My personal favourite song on the album, its heavy yet not too much, and has a catchy chorus that you’ll be humming all day. I know from experience. “Where Eagles Dare” has a catchy beat, and is very good, but isn’t anything special like “To Kill…”. And to finish it all off, we are treated to “With the Fire”, a heavy beating, head-bopping strong song that rounds the album off perfectly.

Overall, the album is a must for all Jerichoholics, and those who long for the days of Metallica, Black Sabbath and Guns ‘N’ Roses. The voice is Jericho is very strong, and easily recognisable. His style of voice suits this sort of music perfectly, and I doubt he could have picked a better back-up band. Y2J and Stuck Mojo blend together beautifully, and as Fozzy, they have created a terrific album in Happenstance. The sound is one that you will have in your head for a while, especially from “To Kill a Stranger”, “Balls to the Wall” and “L.O.V.E Machine”. The only thing holding it back is the fact that they need more original songs, instead of doing covers all the time. But that shouldn’t hinder what is truly a great album.

If you are an old-school lover, with Metallica CDs in your collection, then this my friends, is definitely for you. If not, then still at least give them a go. I didn’t expect much from them (I expected a joke band with joke songs), but they really have put my prediction to shame. As I said earlier, in todays industry, it seems past its time. But its still a great tribute to the legends of rock, and should treat you to a sound and passion that you may never, Eeeeeeeeeeeeeeeveeeeeeeeeeeeeer, hear AGAIN!!!