I adore Studio Ghibli, especially the works of Hayao Miyazaki, who is to Ghibli what Spielberg is to Amblin Entertainment. Others may direct movies under that label, but the name will always only ever conjure up one image: The big smiling face of the grey-bearded Miyazaki-san. Ghibli is responsible for bringing to life a plethora of animated classics, both original stories and stories adapted from other mediums. Many of these have made their way into the west, though few achieved anything more than cult status, and none could be considered box office smash hits.

In the age of streaming, where access to a larger variety of films is more readily accessible than ever before, Ghibli’s catalog has received a small popularity boost in this half of the globe. If you’ve yet to dig into the Ghibli library, let me give you a few to start with. For my money, there are three films that stand out above the rest, and they neatly fit into their own category: One is the studio’s most “overlooked” film (at least in the west), another is the studio’s “best” film (in my opinion), and the third is the studio’s “greatest” film.

An “overlooked” film is not necessarily a film that’s forgotten about, but rather is one that’s not immediately thought of when ranking things from top to bottom. On the other hand, what’s the difference between “best” and “greatest,” you might wonder: For me, the difference is in the technical aspects. The “greatest” movie might have little nits one could pick, but the overall quality and feel of the movie elevates it beyond itself. The greatest movie is a movie that takes on a life of its own, and becomes renowned by those outside the fandom of its genre, even if it’s not “technically” the best-made movie to choose from. The best is the best, but it’s the one that’s maybe given second place in favor of the bigger, bolder, “greater” movie.

Rubber Soul is The Beatles‘ most overlooked album (when ranking them). Sgt. Pepper’s is their “greatest” album, and Revolver is their “best.” That’s what I mean.

For me, Porko Rosso is Studio Ghibli’s most overlooked film by western audiences. It’s rarely talked about but it has a great voice cast, a fun plot, memorable characters, a brisk pace, and some breathtaking sequences.

For the studio’s best, my vote goes to Princess Mononoke, a film I can watch a hundred times and keep finding new things to love. The surface-level plot is thrilling and engaging, and the subtextual commentary gives it a richness that makes it stand the test of time. The animation is also some of the finest ever put on screen. Watching Princess Mononoke for the first time gave me an appreciation for what an animated film could do, and instantly became one of my favorite Japanese films of all time.

If Princess Mononoke is the best Studio Ghibli film, what is its greatest?

What else but the one film that almost achieved mainstream western success, winning the “Best Animated Feature” Academy Award in the process… 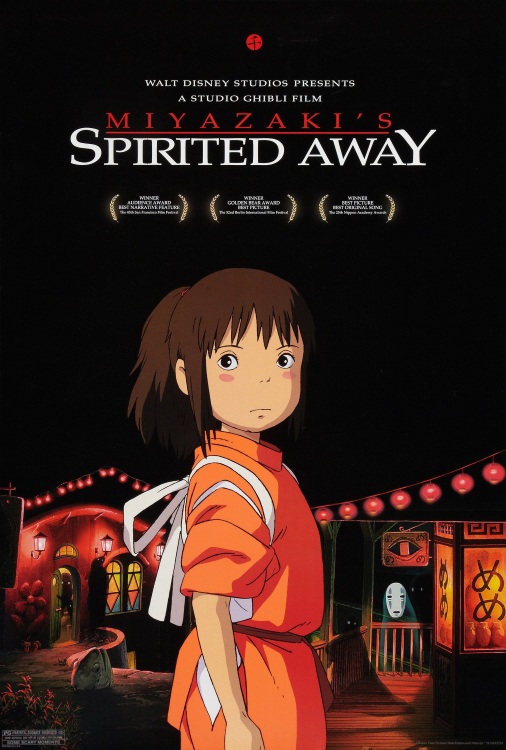 Spirited Away is phenomenal. It is mysterious, exciting, chilling, and calming. Like so many of Miyazaki’s great films, the movie works on the surface level in a way that appeals to children, as well as on deeper levels to appeal to older audiences, too. What is it about this strange tale that resonates so well, even twenty years later?

The story is about a young girl, Chihiro, who, on a trip with her parents, ends up in a seemingly abandoned amusement park. Her parents are turned into pigs and she finds herself trapped with a host of odd creatures and people, some willing to help her, and some with more nefarious means. On paper, the film’s plot is bizarre and simplistic, but it’s what Miyazaki does with the story—visually and thematically—that carries the day here. 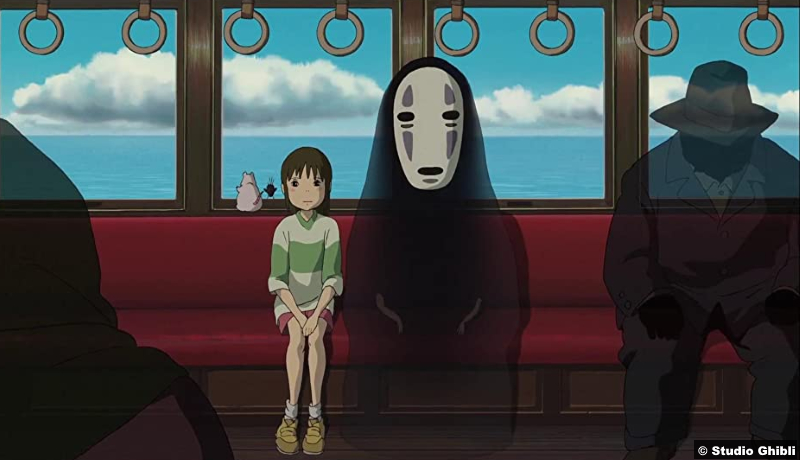 For one thing, the parents turn into pigs after carelessly throwing their credit cards around and consuming whatever food they can stuff their faces with. Turning into pigs in that sense is poetic on a child’s level, but it works additionally when you grow and learn the phrase “capitalist pig.” As she takes up a job at the bathhouse, she contends with an attitude of “life is about working, making money, buying things, having things, using things, then working for more money, to buy more things, to use those things, and so on.” The cycle of a wasted, materialistic lifestyle is on display, whose point is hammered home in the reveal that the gold everyone is coveting is nothing more than a bringer of misery. The work was for nothing, and the lifestyle centered around it was empty and vain.

And then there’s Haku, the boy who first warns Chihiro to escape the Amusement Park before sunset or be trapped. When she fails to leave in time she finds him again, discovering that he has been there for a long time, without any memory of when he got there or even who he is. It’s not till the climax of the film that he (and we) learns he is the river spirit (a stunningly animated dragon), whose waters are filling with pollution and whose bends are being crowded by buildings and industry. Nature is being driven out and forgetting itself in the process. 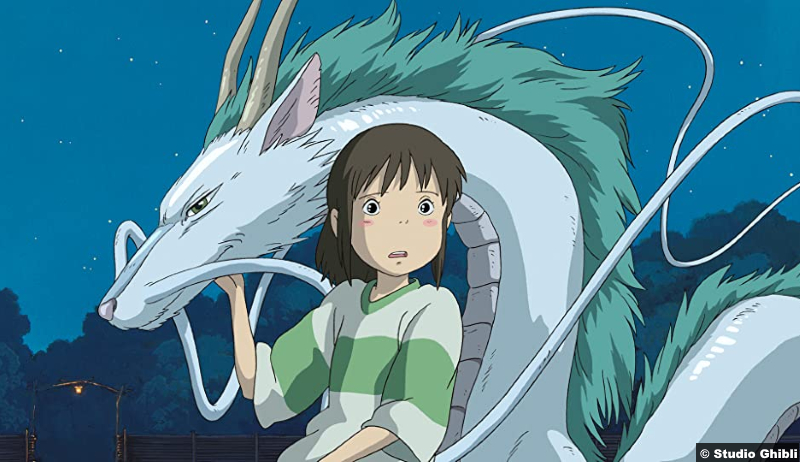 Many of these themes are explored, in a different way, in Princess Mononoke, but Spirited Away, despite the less traditional fantasy setting (compared to Mononoke) hammers the points home in more direct ways. It’s probably for that reason that the movie resonated with western audiences to greater levels than Ghibli films that came before it. It wraps up its message of environmental preservation and the dangers of coveting the excesses of material possessions in a stylized, fanciful, adventure story. You could tell the same message with an 80-minute documentary hosted by some university kids interviewing experts in their respective fields, but why do that when you can get the same message across in a sugar-coated world filled with dragons, sludge monsters, and faceless specters? That’s the magic of a well-told tale, and that’s the beauty of Spirited Away, brought to life by Hayao Miyazaki doing, if not his “best” work, then certainly his “greatest.”