REVIEW: Deadpool 2 does it again

Two years ago, Ryan Reynolds’ dream project became a reality when Deadpool released on Valentines weekend. It was billed, with a wink and nod, as an R-rated, comic book-themed romcom, and…it was? It’s pretty remarkable to think about in hindsight, but the movie which touted itself as a great “date movie” did exactly what it set out to do: It was Deadpool…but with a heart.

If you don’t know, Marvel’s Deadpool is a foul-mouthed, irreverent, gun-toting, sword/knife wielding antihero mercenary. He is, to the best of my knowledge, the only character in the Marvel universe who is aware he’s a comic book character. He frequently breaks the fourth wall and addresses the readers, disses his writers/artists and just all around jokes around about his comic status. He’s one of the most unique characters in all of comics but due to his violent nature it was never imagined that he would ever make his way into a mainstream comic book movie, much less a solo film.

Likewise, due to his “meta” persona, it was hard to imagine him being translatable to a motion picture format. I mean they tried in that one Wolverine movie… 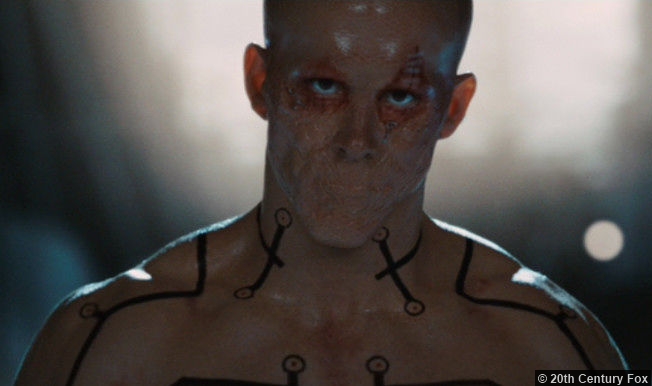 But no, that was Deadpool in name only.

Reynolds made it work two years ago though, and he did it not just with funny quips and fourth-wall breaking; he did it with a story that gave every joke a center, grounding it with relatable stakes (guy gets girl, loses girl, wins girl back). Of course a sequel was inevitable but with every sequel to a movie like that, there’s always a worry. The first Deadpool was lightning in a bottle. It wasn’t a perfect movie: In our review we gave it an 8, and worried that the freshness of the humor would only work initially and would wear off over time, and I think that has not proven to be the case. The flaws in the first one are still there, namely the thin villain, but the rest works. In hindsight, I’d bump it up to a 9/10.

A sequel has a much harder task. The expectations are higher, there’s no uniqueness to the formula anymore. If you do a carbon copy you’re boring but if you veer too hard to the left or right, you’re abandoning what worked. It’s a tightrope and not many can pull it off. Even Guardians of the Galaxy Vol. 2 failed to reach the heights of the first (which we initially rated a 9 on the strength of its visuals and character development, but in hindsight, some of the jokes run too long and the pacing is still an issue).

So what about Deadpool 2? 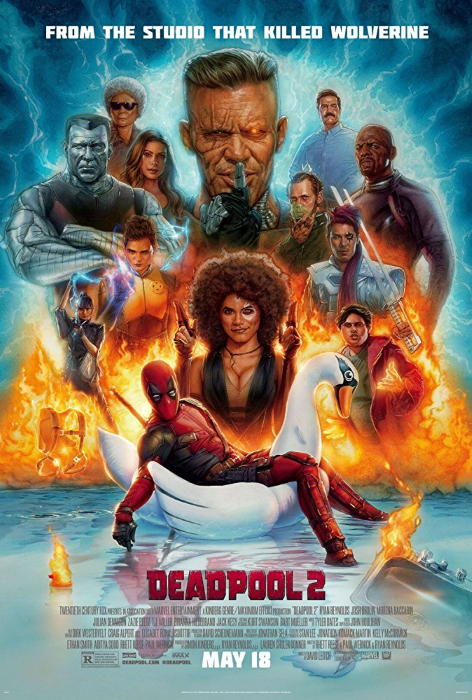 My first gut-reaction is: They stuck the landing.

The movie works because it took what worked in the first (quips, fourth wall breaking and relentless violence) and did more of it, but didn’t just settle for retreaded jokes or go bigger for the sake of bigger. It also took what didn’t work in the first (thin “action” plot, poorly developed villain) and improved it significantly. The plot is much stronger here. In movie one, the emotional arc (between Wade and Vanessa) was excellent but the stuff driving the action was lacking. Here, the emotional arc and the action plot are intertwined to a much more effective degree, making for a better-paced film overall.

The first movie’s emotional center was a love story. Here, as Deadpool will tell you in minute one, the emotional core is “family.” And just like how the first movie took your “no way this movie can make a romance plot work” cynicism and then nailed it, this movie convincingly pulls off a “we need each other/family is important” theme, and it does so with a straight face…as much as Deadpool can do anything with a straight face. Because it has that center, there’s weight to the action and stakes to the plot, giving the jokes an added depth.

It just works. It really really shouldn’t but it does. 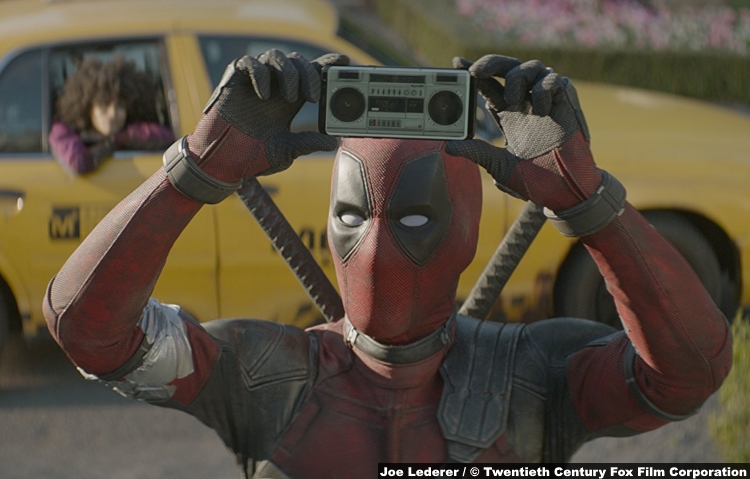 I won’t spoil the plot because it actually goes in a direction that is unspoiled by the trailers. The teasers give you some idea about who does what and why, but a few major details are withheld, making for a more satisfying first-watch experience. Josh Brolin’s rage-filled Cable is the perfect foil to the rarely-serious Deadpool, but the real star in the making is the gorgeous Zazie Beetz as Domino.

I won’t spoil the cameos and visual gags either, some of which are “blink and you’ll miss it” and others are “extended” but all are excellent.

And I won’t spoil any jokes, but I will say that every joke I heard was great and not a single one was a dud. I can’t speak for all of the jokes since some were so amazing I laughed through the two or three that followed. Some were funnier than others, but that’s probably by design. Some were so hilarious I wept literal tears. In fact, I did that twice, once in a scene involving Deadpool’s makeshift team as they drop in on their first mission, and once in a callback to a great joke from movie one, but turned up to eleven. 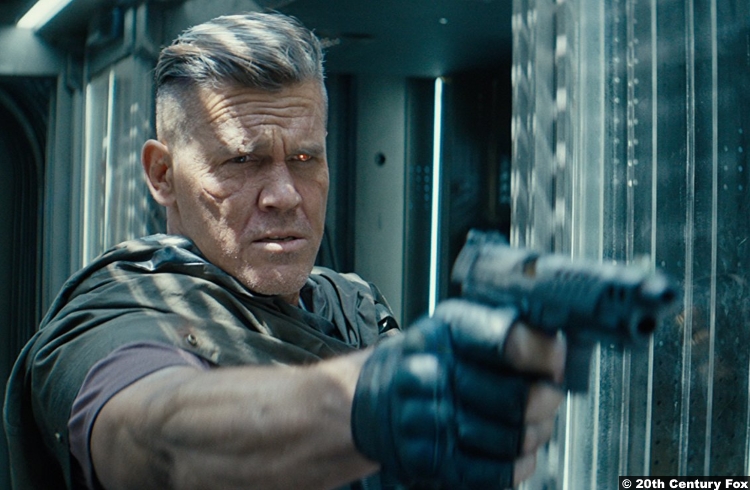 And then there are the credits. At this point, you ought to know by now not to leave as soon as the credits roll. Marvel movies, in particular have mastered the art of the “mid-credits” scene and the “post-credits” scene. Deadpool delivers as well, with arguably the greatest (certainly most Deadpooliest) mid-credits scene ever. And while there is no “post-credits” scene, you simply must stick around to listen to the movie’s two theme songs in particular, one of which (if I may spoil a mild cameo) features the voice of Wolverine from the 90’s TV show singing “X-force” over and over.

I don’t even know what else to say. I was staggered by the balls Ryan Reynolds had to make the first movie the way he did. And even though there was nothing in the sequel that was anything as revolutionary as in the first, I still walked away shaking my head and laughing that such a movie is even allowed to happen…twice.

Less than a month after the Avengers fought to save the literal universe in a deep, action-packed, funny but ultimately emotionally-draining 2.5-hour epic. Deadpool 2 is about as perfect a comic book palate cleanser as you could ask for. 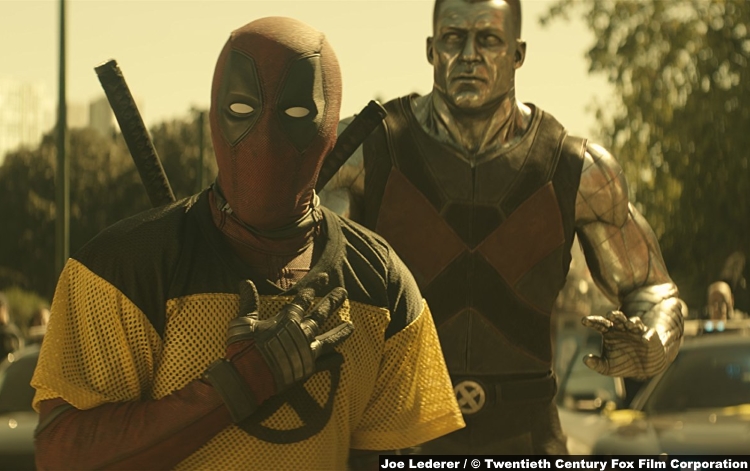 9/10 – As with the first, I’m worried I’ll look back on this in a year or two and see the flaws that I missed because I was laughing too hard at the great jokes and gags, but my first impression is that it’s an improvement on the first in every area but the “freshness/uniqueness,” which can’t really be helped.