About halfway into the 2.5 hour run-time, there’s a fight between Aquaman and his half-brother, Orm. It’s one of those big fights that you know, because it happens so early in the movie, is just a set up for the rematch that will come later. There’s another scene about half an hour before that, where Orm tries to convince a fellow king to combine their armies (to invade the surface world—us). This other king—played by Dolph Lundgren—is reluctant at first but then a submarine (from the surface world, obviously) somehow makes its way down to their meeting-place and attacks them. Orm destroys it and earns the respect of his fellow king, who agrees to unite to fight the land-dwellers. It’s one of those “happy accidents that favor the villain” moments that you know, because you’ve seen movies before, was probably set-up by the villain. And sure enough, two minutes later we learn just that. 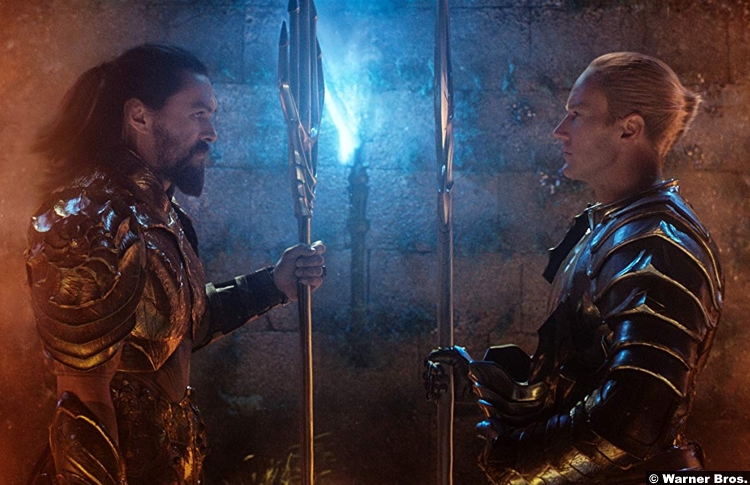 Aquaman is far from an unpredictable movie. Its plot is fairly easy to stay two steps ahead of and often times in movies that’s a bad omen. We want movies that surprise us, stories that shock us, and when the plot is predictable, the audience tends to get restless and impatient.

Fortunately for Aquaman, everything about the film is so much better than it should have been that the entire movie is a shock. The whole thing from beginning to end is one big happy surprise and I’m so happy for DC that they finally seem to have figured out a winning formula for their comic book properties. 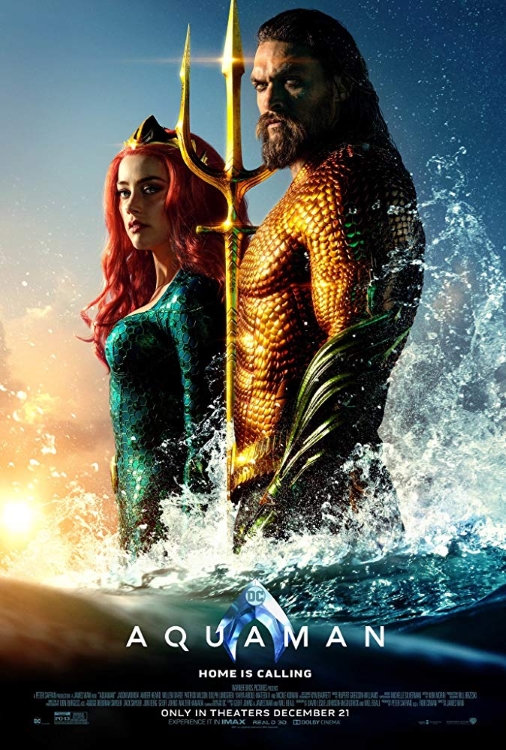 In all fairness, I went in to this movie expecting a C+ film but hoping for a B+ surprise. Critics seemed to like it more than I thought they would so that gave me hope, but I still went in fully expecting to dislike it simply because of how much I disliked Aquaman in Justice League. His whole “dudebro” schtick really got under my skin.

But man oh man was I surprised. 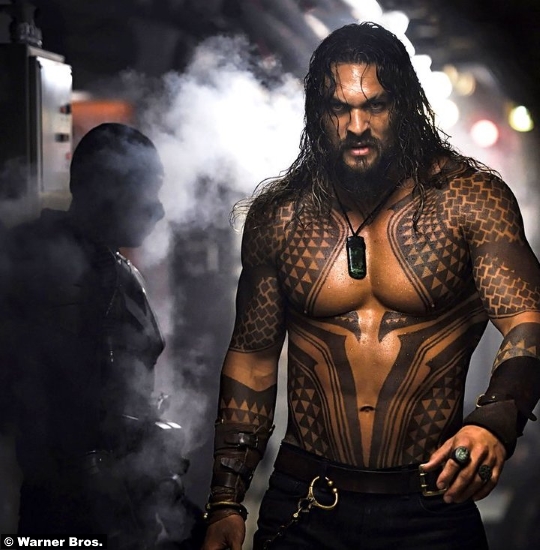 This is the best DC movie since Nolan’s trilogy ended. I give the bulk of the credit to James Wan, who not only brought a great balance of humor, action, and thrills, but reined in Momoa’s more annoying bits from Justice League. Wan also used the camera in some incredible ways. The fight between Aquaman/Mera and Black Manta/Goons was one of the best fight scenes I’ve ever seen, period. The way Wan moved back and forth between the two fights, not with hard cuts but with pans and zooms; it was captivating. That’s the best word I have for it: Captivating. I couldn’t take my eyes off the screen.

I wanted DC to embrace the crazy with this movie; it’s the only way to make Aquaman work. If you try to be ultra serious it comes off as dumb because this is a dumb character. That’s where Snyder fell short, imo. Wan took this movie to the edge of insanity and dangled me over it, laughing all the way. 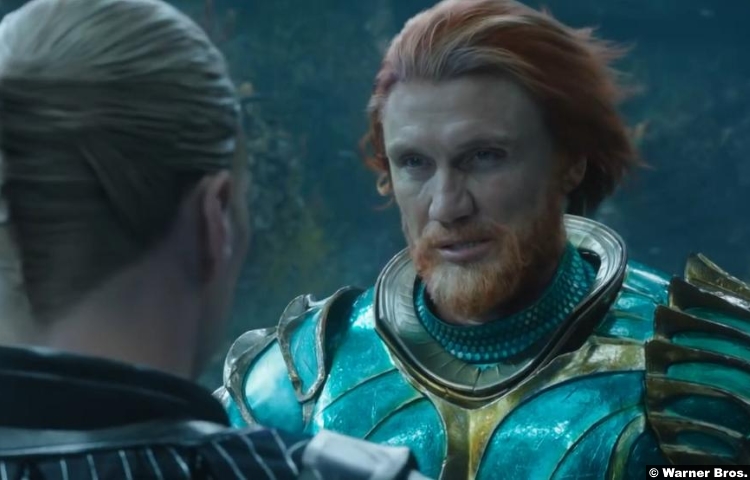 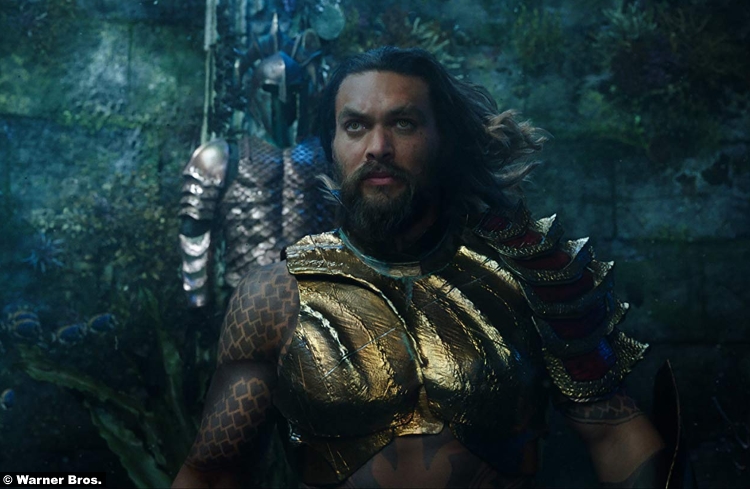 I mean the climax features Aquaman riding a gigantic Lovecraftian Kraken-like monster, in a suit of gold and green armor, commanding an army of creatures from the black lagoon against an army of water-themed master chiefs led by Dolph Lundgren.

I loved the Indiana Jones-like structure to the plot, which moved Arthur and Mera from one location to another, each more different (and colorful) than the last and each culminating in an action scene.

I loved the CGI, which was flawless throughout, with not one creature or shot looking out of place or rushed.

I loved Black Manta and I especially loved his character arc. He basically gets a hero’s arc: His dad dies, he swears vengeance, he builds a suit, he fights the guy who killed his dad. That’s glossing over some of the more villainous parts, sure, but it reminded me a lot of Batman all the same. I was initially disappointed that we only got one big scene with him in the armor (which looked amazing) but then I saw the post-credits scene so I expect him to continue the fight in the sequel. 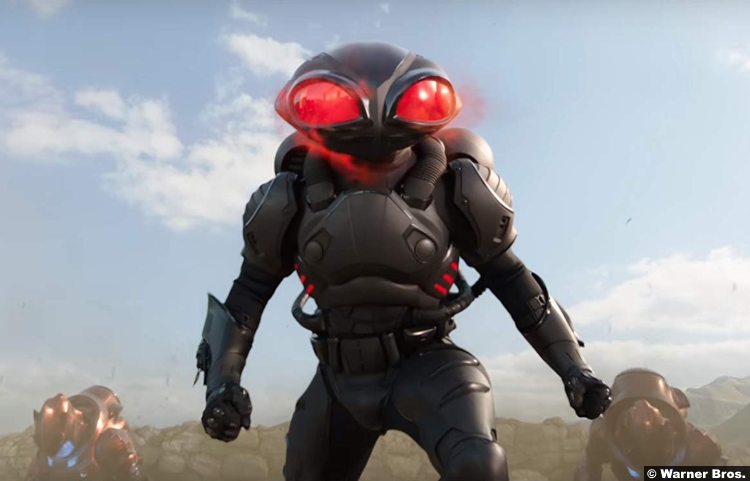 There wasn’t a moment where I was bored. Even in the opening twenty minutes, which easily could have been just a series of info-dump scenes and boring stage-setting, instead had a great fight scene with Nicole Kidman of all people looking great in the most action she’s gotten to do maybe ever in a movie.

There’s really nothing I can say that’s critical against it. Were there some clunky line-readings? Sure. Did Momoa occasionally slip into his dudebro self? Yes. But the overall quality of the movie was so far beyond anything I could have hoped for…I’m too blown away to care about any of the nits I might’ve otherwise picked. Rarely have I ever been so pleasantly surprised by a movie I went in expecting to dislike.

9/10 – and the only reason it doesn’t get a 10 is because I’m sure I’m just high on being so shocked that a second or third viewing will reveal flaws I didn’t catch the first time around.

With this, plus Shazam looking like a ton of fun, WB may have something on their hands here. Just keep handing the reins over to Patty Jenkins and the horror movie guys and let them go crazy.