REVIEW: ANNIHILATION is simply mesmerizing (with or without spoilers)

I do my best to avoid spoilers as much as possible. The most I will do is see the teaser-trailer for a movie, but even then I often end up disappointed at how much is given away. Going to the movies a lot it’s easy to be bombarded with spoilerific full-trailers, but usually if a movie is good it’ll be good even if you’ve been spoiled. In fact there’s a whole study by researches and pollsters and analysts and whatnots who have concluded that people intrinsically want to be spoiled, or at the very least will end up relaxing and enjoying a movie they know the end of more than they do movies where they’re totally blind going in.

I think I understand that.

It’s nerve-wracking to go in without knowledge because you’re also going in with an endless supply of expectations, and if the movie doesn’t go the way you think it will go it’s very easy to grow frustrated and ultimately, unfairly, disappointed in the film. If you don’t believe that happens, you missed a lot of the hysteria from several Star Wars fans a couple months ago.

Now take a movie like Annihilation. It’s based off a novel from 2014 (the first of a trilogy), but four years is not a long time for a book to penetrate the collective consciousness of society. Most movie-goers won’t even know about the book; they’ll decide to see the movie based on this teaser:

That’s the teaser I saw last year and after seeing it I said “Yes. I want to see this movie and I want to go in blind.” The teaser is remarkably effective. It establishes, within seconds, 90% of all the exposition you need to ground yourself in the surroundings: military-esque people, on earth, investigating something supernatural. The music sets the mood, the visuals tantalize, and then the vague dialogue—that’s critical, it’s vague—jumps in. It reinforces the sci-fi setting, heavier on the “sci” than the “fi” and shows us what kind of sci-fi movie we’re getting: Unsettling, mysterious, with some images that will horrify you and then instantly stun you with their beauty.

It also gives away the ending.

Well, okay, to be fair, it gives away one critical part of the ending. Natalie Portman’s character talks in the teaser about her husband, who ventured into the psychedelic place (called Area X in the story) before her and how she wants to go in and save him. But the teaser begins with her discussing what happened while she was inside, which gives away the important detail that she gets out! 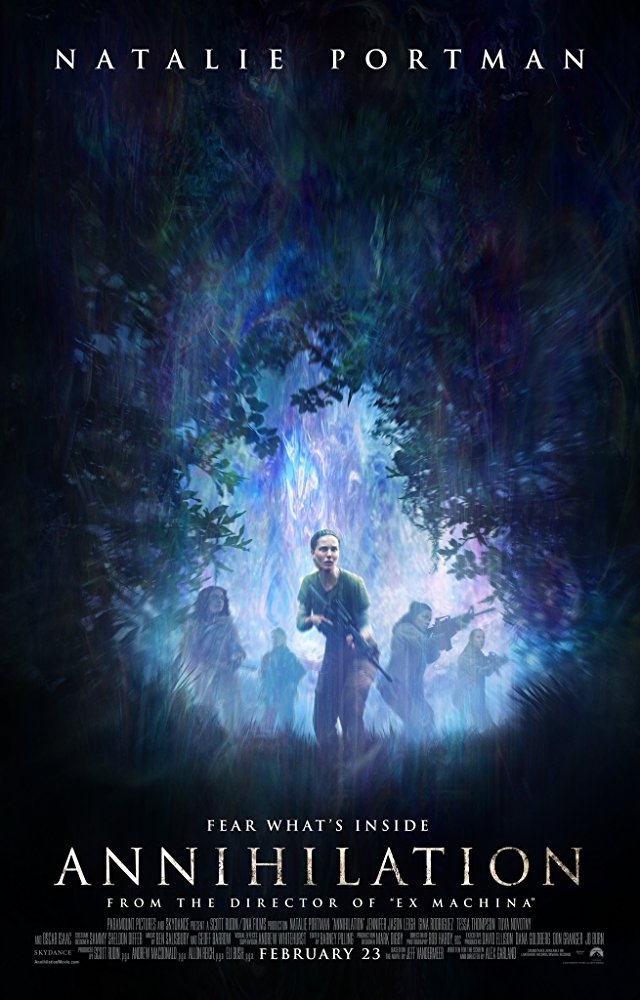 But that critical detail is fine to be given; it’s just enough of a tease, without any context, to make you want to know more, see more and experience more.

“Annihilation: the movie” is a lot like “Annihilation: the teaser.” That may sound strange, but sadly many teasers and trailers do a terrible job conveying the quality of a movie or its tone or its story, etc. Annihilation, like its teaser, will mesmerize you with its visuals (which are stunning), its music (which is daring) and its mood (which is disturbing).

Let’s take those one at a time. 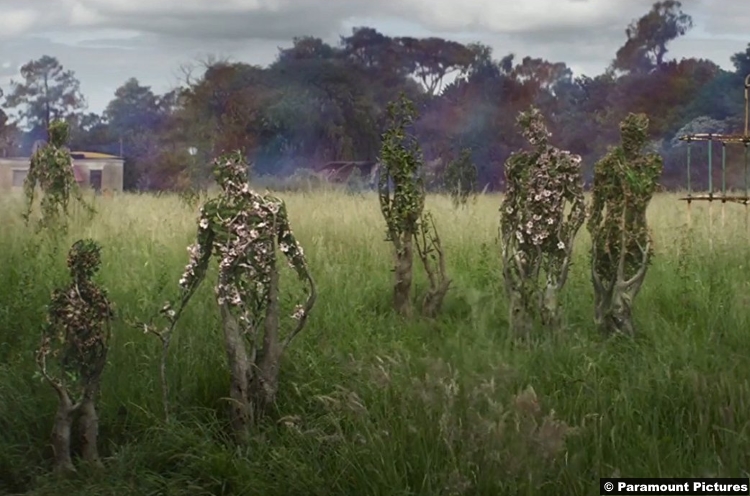 The film is gorgeous to behold, and though there is an abundance of computer-generated imagery, each sequence, landscape, “event” or creature is handled with great care so that nothing ever comes across as too fake. Take the rainbow bubble that the characters enter: It’s brought to life by computer wizardry, but it’s presented in a grounded, realistic way. It looks—you can see it in the teaser—like dishwashing liquid mixing with water in the sunlight. You know how your driveway looks when you’re washing your car in July? That’s the image; it’s “fantastical” and yet “relatable” making it much more believable than 90% of the CGI schlock you find in other movies. The rest of Area X follows that template; everything is surreal, psychedelic and vivid, but it rings authentic.

The teaser follows the “BRAAAM” format of trailers, with a single reverberating note repeating throughout. The movie uses the cue from time to time as well, but it also introduces something else. There is a recurring “tune” that pops in and out at the most unexpected times. It’s actually a folk song heard near the beginning, and repeated in music-only form for the rest of the picture. A picking guitar in the aftermath of an intense moment is jarring, but somehow it works. You step into Area X and you expect BRAAM to be the dominant sound, instead it’s like something from your dad’s eight track. But in a way that’s fitting; Area X is an unsettling place where what you expect to see and hear is not what you experience. 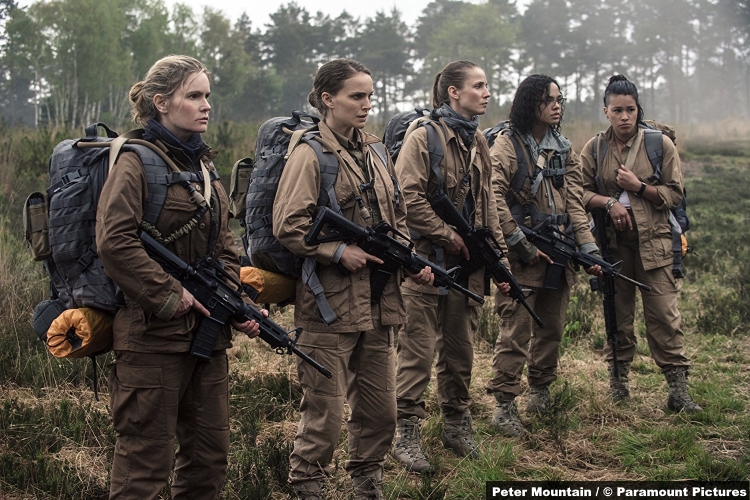 My gosh this movie, especially once the foursome steps inside “the Spectrum” (dubbed Area X), grabs you and doesn’t let you exhale. What’s really remarkable is how the pacing of the movie is so unlike a film with a sub-two hour runtime. This movie has a deliberate pace. Characters walk. They meditate on things. Long stretches of silence allow the audience to reflect, speculate, theorize and more. And then suddenly it gets loud and crazy and it’s insanity everywhere before just as suddenly…it’s quiet again, and we’re walking again. The pace is so deliberate, if you told me when I walked out that I’d been in the theater for three hours I’d have believed you (which mimics a similar feeling of time slipping away in the plot). There’s zero fat to be trimmed, zero wasted scenes. Everything that happens has a purpose and is efficiently shot and cut. The constant feeling of progression, contrasted with the slow movement, all while the movie—in terms of the runtime—is racing to the ending, is simply disorienting…just like how the characters feel in the plot. 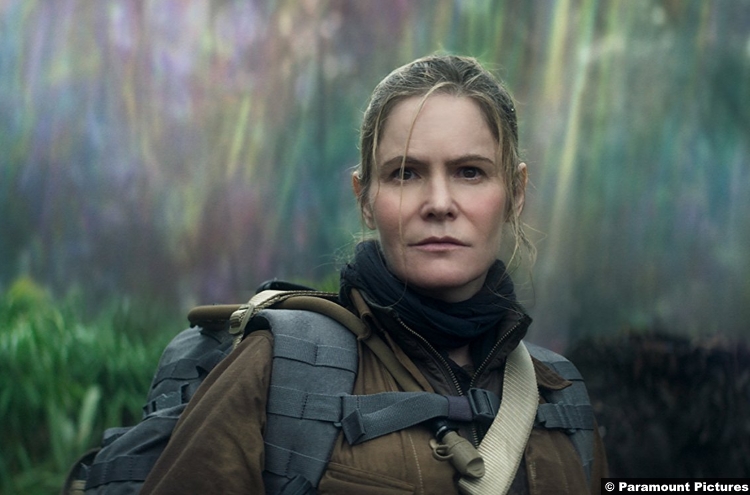 So there you are. Did any of that make sense? Probably not, but neither does the teaser. And when you see the movie you’ll have a better understanding of what the rainbow spooky place is, why it’s here, what’s going on, etc…but you’ll leave with just as many questions too. One thing’s for sure: If you love a good, old school science-fiction story, if you are the kind of person who hears the names Ellison, Bradbury, Zelazny or Lovecraft, you’ll appreciate this movie’s blending of science, horror and awe-inducing discovery.

You may walk away bewildered, but you’ll also walk away mesmerized.

No review will do it justice without giving too much away. Genre fans need to see it.

In the US, Annihilation is out in theaters but in the international market, Netflix has acquired the rights to distribute the film, making it yet another aggressive move by the streaming giant to become a legit movie and TV producer. It’s good for Netflix but, in my opinion, bad for viewers (unless you have a home theater set-up in your house with all the trimmings). The audio and visuals of this movie warrants the biggest and best experience you can give it.

Netflix is out now in US theaters and will be on Netflix internationally on March 12th. However you see it, see it!