And there’s Donnie Darko, which blew the minds of the handful of people who saw it in theaters. Meanwhile, there was A.I., a movie that showed just how weird a movie can be when it combines two very different styles, one that is often emotionless and one that is always feeling. Last month we looked at Monster’s Inc, which proved Pixar was more than just a Toy Story factory, but instead was a studio capable of delivering memorable stories out of the craziest of ideas.

And speaking of memorable stories… 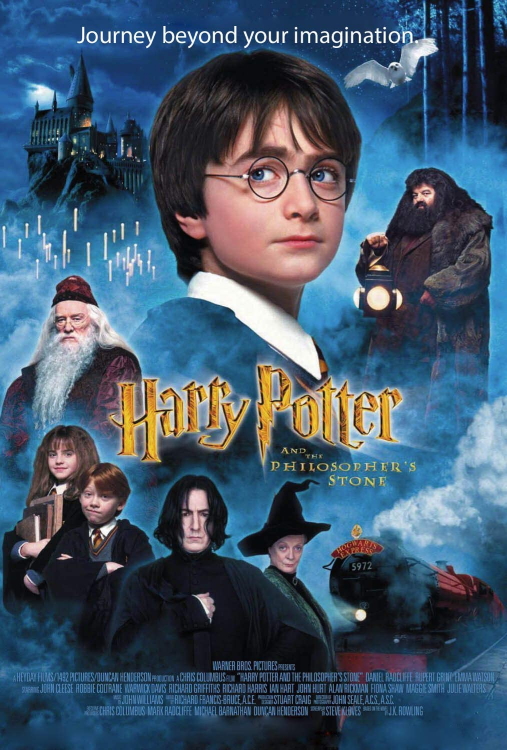 Harry Potter and the Philosopher’s Stone (the movie) was released twenty years ago. At the time, the book franchise from which it was derived had only been around for four years. When the movie premiered, only four books in the series had been completed and we were still a year and a half away from book five. The franchise had grown exponentially, not only in the size of each book but also in the vastness of its fanbase, and there was still room for much more growth. Warner Bros. knew they had a big potential hit on their hands when they secured the rights, but it would be the success of the films that would expand the awareness of the books, increasing the fervor for the final book entries, which in turn increased the excitement for the film adaptations. It was a feedback loop of hype and payoff that WB milked to great success, and continues to milk (to diminishing returns) to this day.

But it all began with The Philosopher’s Stone. As a book, the first installment in the Harry Potter series is a quaint, simple, light-hearted kid’s adventure. There are teases and hints at a larger scope but they’re mostly kept as that (teases and hints). Much the way an eleven-year-old boy might experience the periphery of a larger world while being shut out of the scarier details, young Harry Potter spends most of the first book getting into childish mischief without much appreciation for the epic journey he is only beginning to undertake. 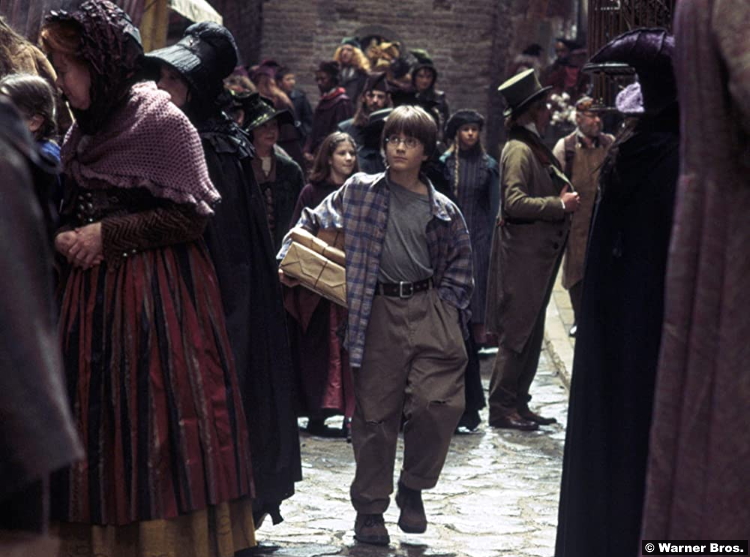 Looking back at the series as a whole, I think it’s safe to say the first book was the easiest to translate to film. It had the advantage of J.K. Rowling’s excellent world-building, character descriptions, and simple premise, and—being the first story—there was no need to worry about catching any newcomers up to the ins and outs of the story. Everyone starts at zero and learns the world together. In hindsight—again, looking back on the series as a whole—I think the first movie has fallen a bit out of style with some people, who view it as too childish, too flat, and even too literal to the source material. Considering how much the later movies would deviate from the books in a hundred little ways and two or three big ones every film, I think that last criticism is entirely unwarranted.

As I see it, the almost unrelenting faithfulness to the original book is either the film’s greatest success or is tied for that honor with the perfect casting across the board. There’s no reason to reinvent the wheel; the story already is chock-full of whimsy, mystery, adventure, escapism, and fantasy fun. If a screenwriter could craft a better original story they would have. They didn’t, WB bought the rights to it because of that, and were wise enough to translate the book as closely as possible. Considering how the movie was made at the same time Peter Jackson was working on the Lord of the Rings trilogy (which also adhered marvelously close to the source material), the 2021 holiday season was a double-gift for fans of fantasy literature. 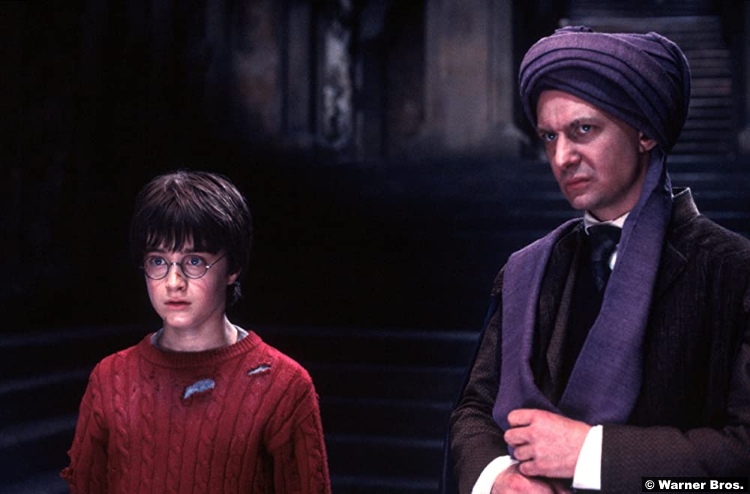 There’s little else that needs to be said about Harry Potter. What else can be said that hasn’t already been discussed in exhaustive detail? Let me instead leave you with a personal account of what this series of books and films mean to me. I watched The Philosopher’s Stone before I read the book. I picked up the DVD in 2002, as a senior in high school, having paid it no mind when it was in theaters the previous Christmas. I bought it on a lark when I was looking for something new to watch. The back of the case showed a quote from a critic that called it the modern-day Wizard of Oz; that was enough for me to give it a chance. From then on I was hooked.

Fast forward twelve years and I was a father of two. It was the Spring of 2014 when I walked into the bedroom of my sons (they shared a bunk bed) with a red and blue hardback book in my hands. My boys, especially the older, had been having trouble sleeping and seemed to relax best when someone was in there just reading away at them. The younger of the two was too young to appreciate it, but my older son—then eight years old—was close enough to Harry’s age in book one for me to give it a try.

I don’t know how much good I did my son’s insomnia since I insisted he sit up and pay attention while I read. I told him as we began: “There are things talked about in this book that won’t matter until the last book!” And then we started: Harry Potter and the Philosopher’s Stone. We read a chapter a night, sometimes two if it was early enough and he was determined enough. We read three or four nights a week till we were done, then watched the first movie. Seeing the excitement on his face at the chapters coming to life was a heart-swelling moment as his dad. After a few months’ break we read book two, then three, four, and five finishing each with a watch of the respective film. 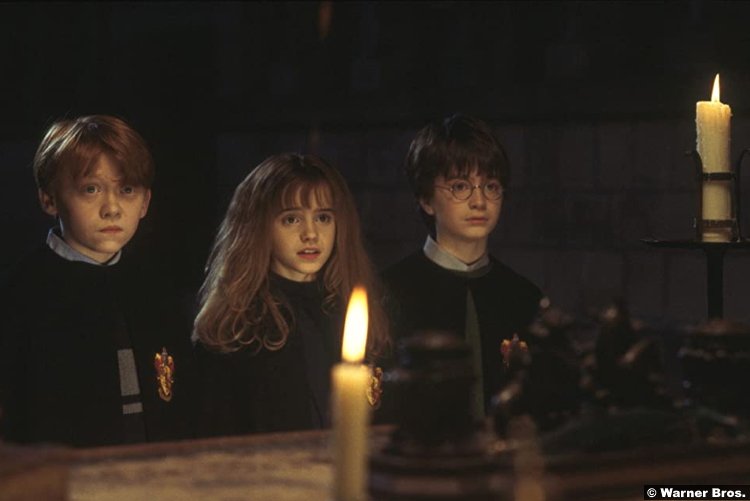 The books got longer and our schedule’s busier. Months turned to years and suddenly it was four and a half years later and my little boy was almost a teenager. It was time to read the sixth book. Time has just evaporated. Still, despite his age and the fact that he was more than happy to read books on his own, I insisted he let me continue reading to him. To my delight, he allowed me the privilege.

Knowing the finish line was ahead, we pressed on, reading more and more each night until we were burning through hundreds of pages in a week. As we neared the five-year mark, we started to slow down, not because we were so busy, but because we were nearing the end of the final book. When the time came and we finished the last chapter and the epilogue of Harry Potter and the Deathly Hallows, we both sat in silence, reflecting on the half-decade endeavor we’d shared together.

As I read the final pages I couldn’t help but choke up (again, having already choked up the first time I read it to myself). At the time, he wondered why I was crying since it was such a happy ending. He didn’t understand the tears weren’t for the story.

There’s a lot of death in the Harry Potter series and we shed a lot of tears along the way. He puckered when Cedric died. He was inconsolable when Sirius fell through the veil. The ending of book six wrecked him for days. There were too many deaths in book seven to process, but not too many that we didn’t cry over each. Hedwig and Mad-Eye were horrible omens. Losing Dobby hurt the worst; we held each other and cried over that one, both of us saying how he was our favorite character, so full of happiness and life. The perfect character for a child of eight. Then there was Fred and Lupin and Tonks. He cried because he spent years with those characters. Still, that’s not why I cried on our last night to read the books. I didn’t cry for the dead characters, I cried because I knew the series was over, and with it our time reading it together.

Sure he can re-read it. Goodness knows I’ve re-read the series myself probably seven times over. But more than anything there’s no more “me reading to my son.” He was already too old for that by the time we ended, but when we did, we both knew, we were closing the book on his childhood. We watched the final movies and still talk about the series from time to time, but he’s older now and while we still go see movies together and play games together, it’s natural that he would grow up and venture into his own world of interests.

When we finished the Harry Potter series, we finished something that you just can’t get back: a dad reading a bedtime story to his first-born son.

And every time I hear John Williams’ “Hedwig’s Theme” play, or when the first movie comes on the television, I don’t feel the same rush of nostalgia that the movies from my younger days usually bring. What I feel is the poignant emotions of a dad who loves his children, and who loved sharing the magic of a good book—and a good movie—with them.

For that reason, and many more, Harry Potter and the Philosopher’s Stone is still awesome twenty years later.