Already we’ve considered the very “era-specific” fun of Shrek, a movie that has aged better than you might think, precisely because it refused to conform to the Disney/Pixar style it was rebelling against.

Speaking of very era-specific movies, there’s a lot on this list that qualify as such, including this month’s entry… 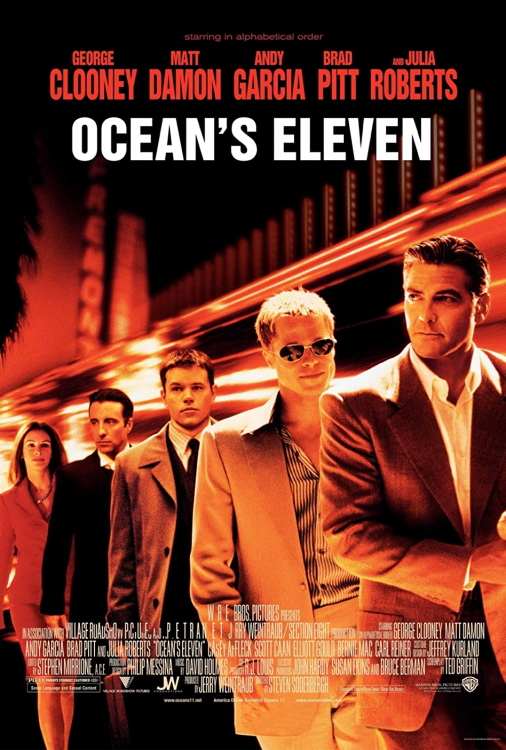 Just look at it. The suits, the youthful appearance of its stars—particularly Clooney—the frosted-tipped hair. It’s all so glorious. It’s a millennial explosion of fashion and coolness and I love it to pieces. This being February, the month of love, I thought it appropriate to sing the praises of Ocean’s Eleven, an absolute gem of a movie that holds up for a hundred and one different reasons, twenty years after release. How do I love thee, Ocean’s Eleven? Let me count the ways…

1. I love that you’re a remake of a 1960’s Rat Pack movie, without being a slave to the original. If you didn’t know there was a previous movie with a similar premise and title, you’d never get a hint of it watching the 2001 film. There’s no obvious winks and nods, no odd cameos, no misplaced digressions in the story that stick out like a sore thumb and are only there for fans of the original to go:

There’s none of that. The movie is its own bird.

2. I love how effortlessly charming the film is, much like its title character. Danny Ocean is a cool cat, played to perfection by George Clooney at the peak of his prime. He’s suave, in control, and (as said) utterly charming. In the story, he plays a man who lost his girl and wants her back. Watching the film, the most unrealistic part (of a movie that features an elaborate casino heist) of it all is the fact that 2001-era George Clooney is lacking a lover.

3. I love how effortlessly charming the film is. Did I mention that already? I sort of got sidetracked talking about Clooney. Ocean’s Eleven is the most chill, relaxed, easy-breezy heist film I’ve ever seen. Sure there are moments of tension here and there, but it’s nothing compared to what you’d find in movies like Inception, Heat, or The Town. Maybe it’s because the movie never bothers to up the stakes so that you fear for the lives of the team. Instead, the focus is on the banter between the gang, the set-up for the heist, and the tit-for-tat verbal dance between Clooney, Roberts, and Garcia.

4. I love the way the cast is introduced, person by person, showing off not only what makes them so much fun to watch but—while you’re distracted by how fun they are to watch—also what makes them so skillful and important to Danny’s plan. The movie almost works as an unintentional meta-commentary on itself. You, the audience, oohs, ahhs, and laughs over the wit and charm of the eleven team members, letting the crucial bits and details sail right over your head until the time comes for them to work their stuff. When that happens, the sly and charming cast flip a switch and work their magic, showing how fooled not only the antagonists in the movie were, but the audience as well. 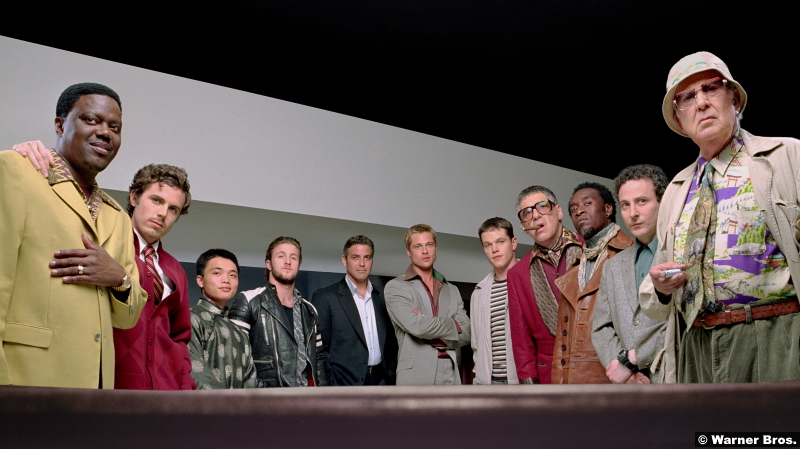 5. I love this line of dialogue, spoken by Rusty to Danny regarding the kind of team he’ll need to assemble…

“Off the top of my head, I’d say you’re looking at a Boesky, a Jim Brown, a Miss Daisy, two Jethros and a Leon Spinks, not to mention the biggest Ella Fitzgerald ever!”

6. I love Carl Reiner. I love the way he commands every scene he’s in. I love how naturally he fits into this genre of film. I love how he has the fewest one-liners and intentionally-funny bits of dialogue, compared to the rest of the group (despite his long pedigree as a comic actor), but almost every sentence he utters in the movie makes me at least chuckle. Must be a force of habit. 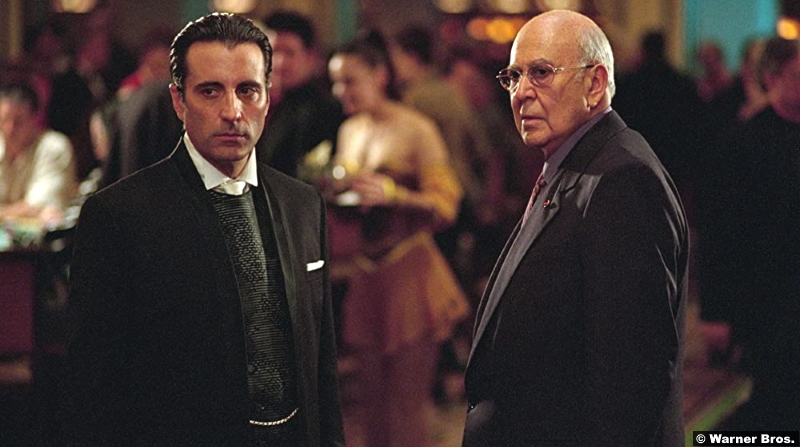 7. I love how, not only is the way the heroes will pull of the heist withheld from the audience (as is customary), but added to that is a persistent feeling of impossibility to it all. You hear the plan, you understand (most) of the moving pieces that are at work, but it never adds up. In fact, the movie almost convinces the viewer that the heist itself will fail. It sort of sets Danny up as someone whose end can only be a return to prison. Instead, they pull the rabbit out of their hat and do the impossible, in one of the most satisfying endings to a heist movie I’ve ever seen.

8. I love how the movie is like a mini-Friends reunion, with so many bit-players, side-characters, and guest-stars on the show appearing in the movie (among them are Brad Pitt, George Clooney, Julia Roberts, and of course Mr. Geller himself, Elliot Gould). 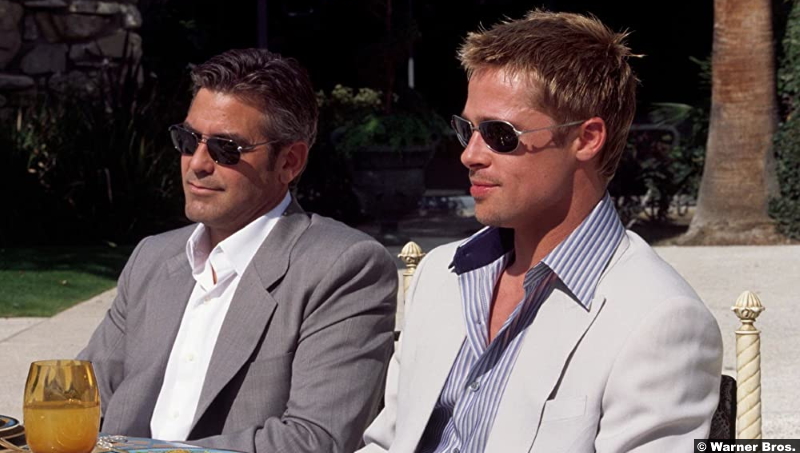 10. I love Elvis’ “A Little Less Conversation.” At the time the song had not gotten its big remix re-release (propelling it to #1 on the Billboard Chart). It was just an obscure Presley song that had the kind of feel and energy director Steven Soderbergh was looking for. He could have plucked the low-hanging fruit of “Viva Las Vegas” but he zagged instead of zigged and the soundtrack was all the better for it.

11. I love how endlessly rewatchable the movie is, which is hard to pull off for a heist movie, as that genre typically relies on the big payoff in the end that the audience didn’t fully expect. Once you’ve seen it, a lot of the magic is gone. With this, the heist itself is secondary to the banter and the fun being had by the ensemble, fun which is shared by those watching at home.

Ocean’s Eleven remains one of my “comfort food” movies. It’s a film I can put on whenever I’m under the weather or just bored on a lazy Saturday afternoon. It has remained one of the most watchable, joyous, well-made films of its genre and is still awesome, twenty years later.