Up first is a movie that dominated at the box office, only to see its star quickly fade… 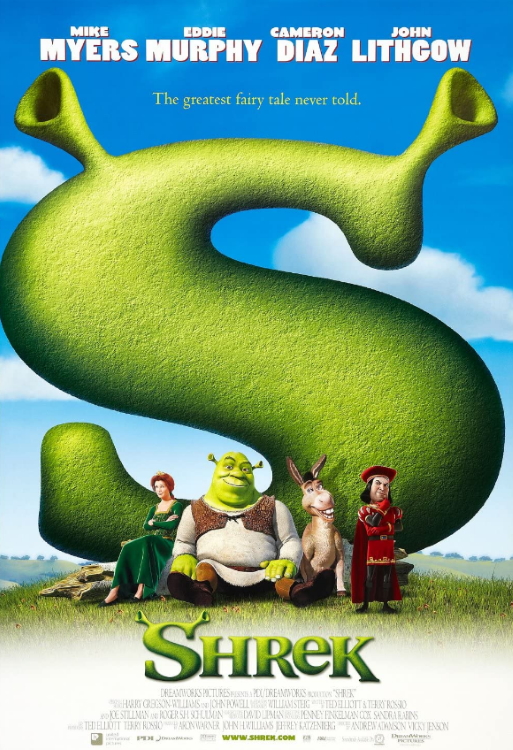 Shrek is an odd sort of movie. It’s a film marketed and remembered for all of its worst and most short-term qualities. It’s a movie that, watching it for the first time in May of 2001, eleventh-grader me realized even then “this movie is going to be so dated by the time it hits DVD.” Indeed it was, even though the film spawned a franchise, going back to that first one was, for a long time, an exercise in cringe. The music, the jokes, the pop culture references were only barely still en vogue when it hit theaters. A year later it was the equivalent of someone unironically “throwing the dab” in a movie today.

Still, credit to Dreamworks for seeing the potential in franchising the ugly green ogre. What followed Shrek was a sequel in 2004, another in 2007, and another in 2010. In addition was a spin-off film, two holiday specials, and a Broadway musical. By the end of the first decade of the 2000s, Shrek was a household name and an entrenched pop culture icon. Unfortunately, that icon-status came at the cost of good storytelling. The first sequel was solid, but the next two saw severe drops in quality, as did the spin-off works. The pop-music samples and pop-culture in-jokes that insta-dated the first movie, were double and triple-downed on in the sequels, at the expense of plot, character development and, above all, heart.

And yet, that was the deal with the devil Dreamworks had to make to get their foot in the Disney-dominated animation door.

Shrek began with Steven Spielberg buying the rights to the 1990 fairy tale book, intending to produce an animated adaptation through his Amblin Animated studio (previously responsible for An American Tail and The Land Before Time). Once Dreamworks SKG got up and running, the “S” in SKG shifted the project over to his new studio, and offered it up as a potential computer animated project, to compete with the offerings from Pixar.

To appreciate the environment into which Shrek was released, you must remember what the animated scene looked like in 2001. Disney’s animated renaissance kicked off with the Little Mermaid in 1989, and dominated at the box office (and home video market) for the next ten years, only fizzling after 1999’s Tarzan. By that point, Pixar had picked up the slack, with the very successful Toy Story in 1995, the moderately successful A Bug’s Life in 1998, and the hugely successful Toy Story 2 in 1999. Three big movies had firmly solidified Pixar as the new leaders of the animated scene, and when Dreamworks first tried to compete—with Antz in 1998—they were thoroughly pulverized at the box office.

Nevermind that Antz was a bland, mostly joyless movie that lacked any substance or heart; no, the takeaway from its failure was “we can’t play Pixar’s game and win; we have to think outside the box and make a splash.” With that in mind, Shrek went into production with the idea that it would be audacious where Pixar was Joseph Campbellian, irreverent where Pixar was saccharin, and, most importantly, culturally hip where Pixar strove for timelessness. 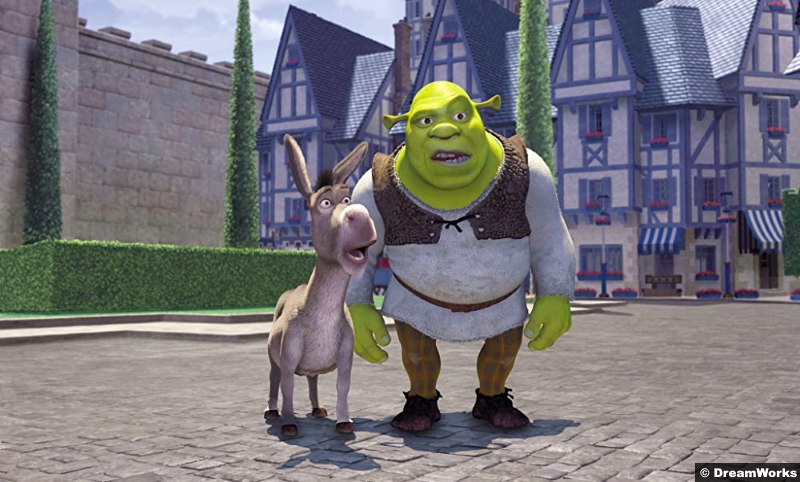 And yet, looking back on the movie twenty years later, it’s not the soundtrack that holds up. It’s not the fart jokes, or the weird “did Donkey have sex with that dragon?” implications that hold up. In fact, those are just as dated as they were in 2001. Those things define the movie, yes, and are what people remember about it if it’s been a decade or two since they saw it, but if you haven’t seen it in a while, give Shrek another watch. What you’ll find is the dated parts are now, so long after the fact, able to be ironically enjoyed, allowing the genuinely good parts to flourish.

And there are genuinely good parts.

Shrek is a movie with a big heart and a strong message of acceptance at its core. That much is pretty surface level and is easily understood: The twist that Princess Fiona is, herself, an ogre is a clever one and adds enough dimension to the story to keep it from petering out before the third act, but that’s not the real reason the movie is so good. Shrek thrives as a mocking deconstruction of the classic fairytale, specifically the Disney-branded fairytale movies the company had just spent a decade running into the ground. 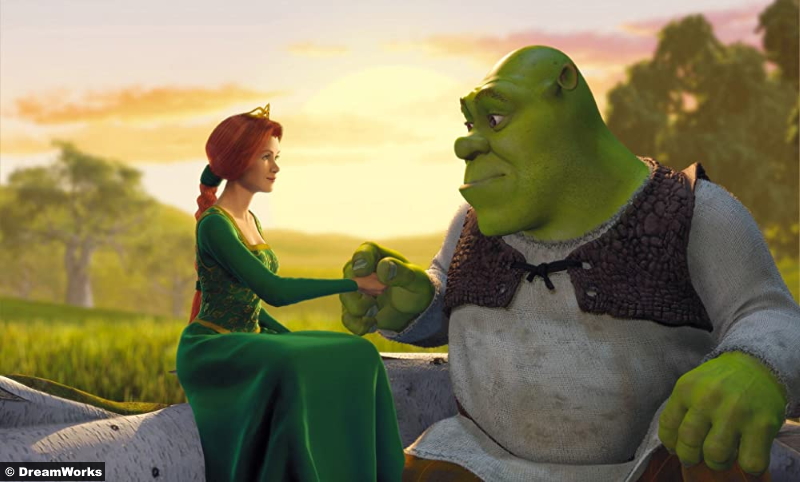 Consider how Shrek takes two of the most well-worn tropes of the fairytale movie genre—sweeping songs set to classical instrumentation (think A Whole New World or Colors of the Wind), and Ugly=Bad (think Ursula in The Little Mermaid, or The Beast from Beauty and the Beast, who turns into a handsome man in the end) and flips them entirely on their head. Within the first two minutes we get Shrek in an outhouse using a fairytale book as toilet paper, before busting open the door to the tune of All Star by Smash Mouth. Take also the classic “horse sidekick” character that is a staple in so many Disney fairytale movies (Achilles from The Hunchback of Notre Dame, Captain from 101 Dalmatians, Khan from Mulan, Major from Cinderella, Phillipe from Beauty and the Beast, and on and on). Shrek gives us, not a horse, but “Donkey,” an obnoxious, crass, wisecracking mule that manages to have a well-defined character arc and purpose in the story. Likewise, Fiona is hardly a damsel in distress, or a princess with no meaning other than to be caught and rescued. She is a character with agency and, even better, flaws and secrets that give her depth. But having said that, she’s also not just a “this lady is not a damsel in distress” character, which has become an overused trope in and of itself; instead she’s just another character in the story, equal to the others. 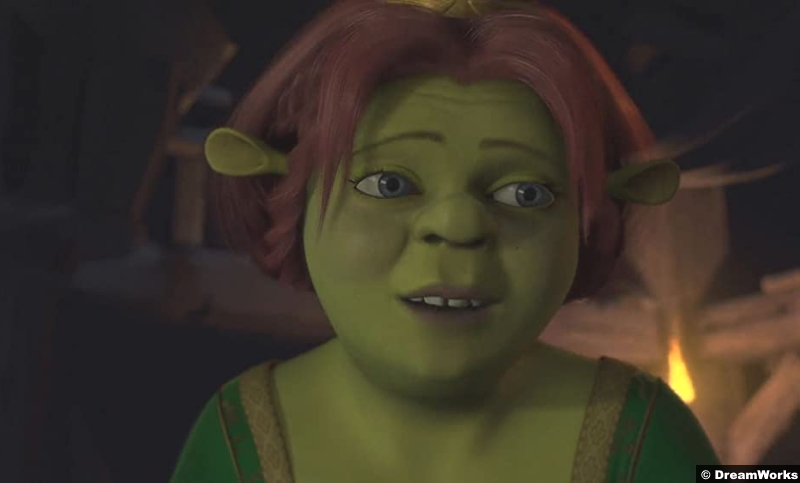 Shrek is a movie that made its mark by being the loudest, most obnoxious, biggest personality in the room. It’s fitting that it was originally written for and partially recorded by Chris Farley before Mike Myers took over the project. It’s a movie that went big, even at the risk of dating itself, in order to capture the attention of its audiences. Twenty years later, it’s safe to say that Pixar weathered the challenge brought to them by Dreamworks, and movies like Monsters Inc and Toy Story 2 have grown more endeared than Shrek, in large part because of that classic Disney “timelessness” that they insist for their movies, a quality that Shrek went out of its way, boldly, to lampoon. 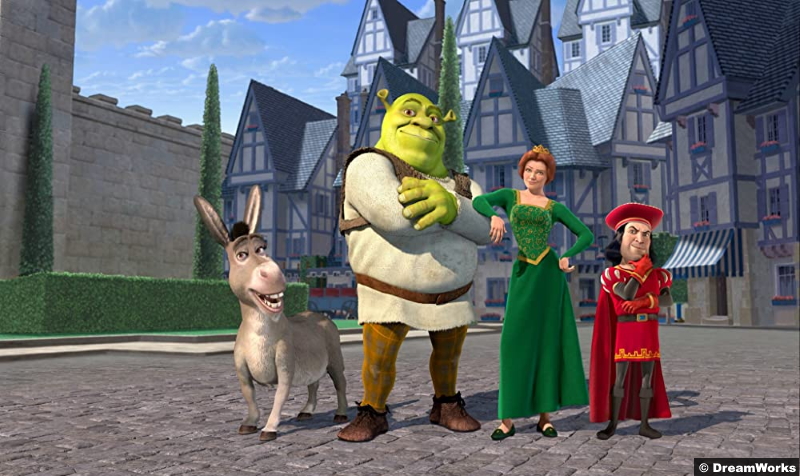 Shrek is not a Pixar movie. It never wanted to be, much like the title character never wanted to be the kind of “hero” that he wiped his butt with after his regular morning poop. It isn’t a Pixar movie; fine. What it is, however, is a movie with a big heart, a charming cast, a ton of fun, and—despite being mostly overlooked these days—is still awesome, twenty years later.