Sometimes, however, the commentary we need in a movie is the special features, recorded by the director to explain what the heck his movie is even about… 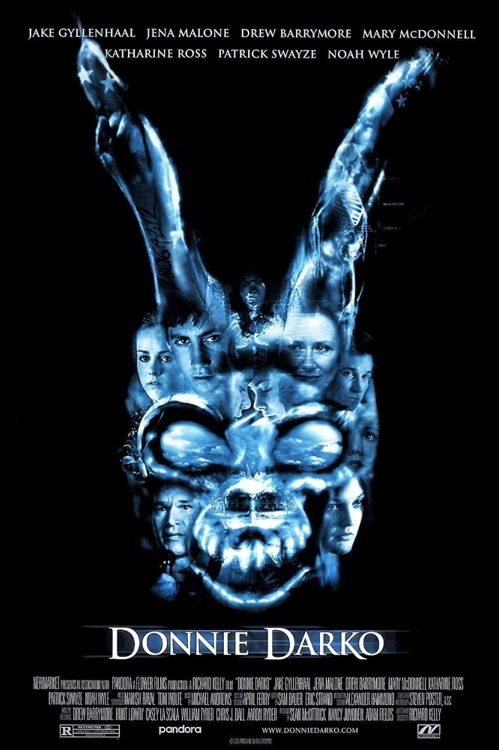 Let me begin with a wonderful note taken from IMDB…

Writer and director Richard Kelly came up with the idea for the future blobs while watching football. John Madden used to use a “telestrator,” where he’d diagram a paused video to show where the players were about to go moments before letting the tape roll. Kelly watched this while high, and started to think about what would happen, hypothetically, if “someone upstairs” was doing that to humans. Fittingly enough, Donnie first notices the future blobs while watching football.

Richard Kelly crafted a movie that continues to be analyzed and debated two decades after its release. If you haven’t seen the movie in a while, it might be hard to read a simple summary and go “oh yeah, I remember all of those plot points…” This isn’t exactly Batman Forever. The movie does not lend itself to summation. It’s the kind of film that is experienced, felt as much as it is watched, and which leaves “impressions” on viewers, rather than explicitly stated meanings. Anything that is at least partially conceived while the director is listening to John Madden while high (I mean the director is high, not John Madden…oh gosh, can you imagine if John Madden was high? Anyway…), is a movie that’s not going to be easily digested.

To start with, let’s consider how a movie like this was even made with a cast as well-known as this was. Jake Gyllenhaal is the lead, and he works opposite his real-life sister Maggie. There’s also Noah Wyle (famous for his role in E.R.), who plays a teacher, Maggie McDonnell, who plays Donnie’s mother, Beth Grant, who plays the gym teacher, and Drew Barrymore, who plays Donnie’s English teacher. It’s not exactly Oceans Eleven, but it’s a lot of big names, all working on a weird, quasi-thriller, sci-fi, horror, coming of age story that was made on a 4.5 million dollar budget. There’s even an extended Patrick Swayze cameo. How they pulled it off is thanks to the aforementioned Drew Barrymore, who co-financed the movie and really championed it every step of the way. There were others in Hollywood rooting for this oddball film, too: At one point, Donnie goes to the movies to see, what was originally to be the old B-movie horror film, CHUD, but when Kelly couldn’t secure the rights, Sam Raimi offered him the right to use Evil Dead. And when the movie looked like it might be relegated direct to home video, Christopher Nolan of all people pressured the studio to release it in theaters. 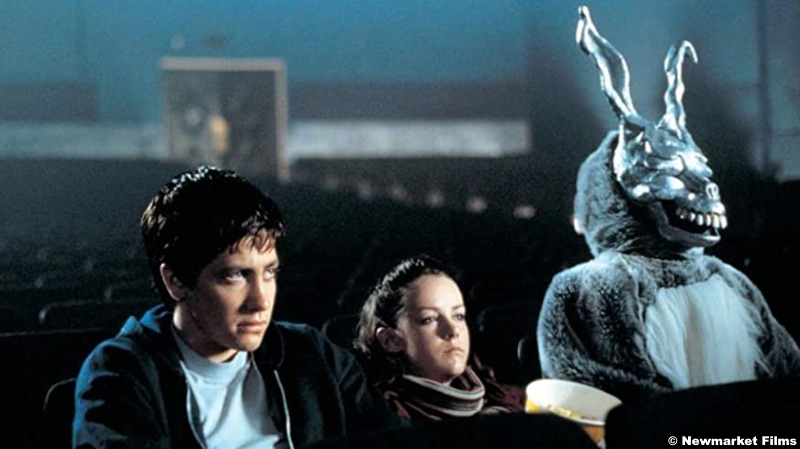 So what is this movie, that was so rooted for by people all over the industry? What is going on in Donnie Darko? To try and explain the movie is foolishness, but here goes:

Donnie Darko nearly dies in a freak accident, and afterward is haunted by a figure in a dingy bunny suit (complete with nightmare-fuel bunny mask), who warns him of the end of the world and asks him to play a key role in saving it. This leads to Donnie committing three specific crimes (he floods his school, he burns down the house of a pedophile, and he shoots a man). The twist, among many, is that the giant bunny man is actually a young man named Frank. What’s going on in the movie is the conflux of two different universes: In one, Frank the bunny guy is alive. In another, he is dead. The dead Frank transcends into the other universe in an attempt to save the world and, as a result, his own life, by convincing Donnie to sacrifice himself to save everyone else.

Hmm…when you read it, I guess it’s not nearly as convoluted as a Charlie Kaufman movie. Nevertheless, watching the story unfold is a surreal experience because it doesn’t spell out its plot or its goals, beyond the central big idea that the world will end in so many days, so many hours, so many minutes, etc. We watch Donnie seemingly meander about, doing random things, without any sense of drive or motivation to solve the problem at hand. And then, in the end, the world ends up being saved by what seems to be a completely separate act of God (and I mean that literally) combined with time travel and, ultimately, Donnie choosing to die so that everyone else could live. 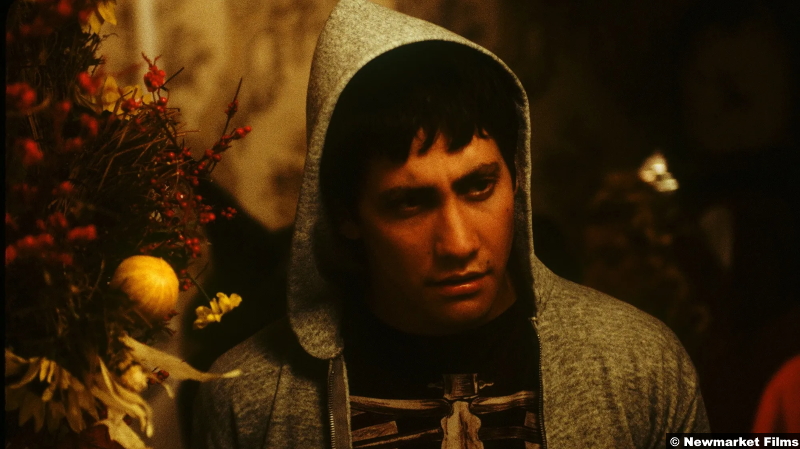 It’s a tough movie on the first viewing…and the second. Even the star of the film admitted that he had no idea what it was about. I won’t bother going into how best to interpret the surreal images and slow-burn unfolding of the story; there are a hundred videos on YouTube that do just that. Instead, I’ll just say that this is a movie that resonated with a lot of young people coming of age at the turn of the century/millennium. The biggest song on the soundtrack, a moody cover of Mad World by Gary Jules, went to #1 and became the definitive version of the song, supplanting the original (and upbeat) Tears for Fears version. Whenever people ask me what the movie is about I always tell them to listen to that song. As a junior in high school, I didn’t know what was going on in Donnie Darko, but I knew that I dug that song, and I knew, somehow, that the two were related. Beyond that, I was blind: My generation didn’t know what this movie was about. We couldn’t explain it to anyone who hadn’t seen it, or to anyone who had, or even to ourselves, but it was the rare kind of movie that subconsciously conveyed its meaning. We felt what it was. We “got it” on an intrinsic level.

Those of us who actually saw it, I mean.

Donnie Darko bombed in cinemas. Even with a budget as scant as it was, it only just recouped its production cost, bringing in only seven million dollars in theaters. The big killer was the fact that the movie revolved around a jet engine falling out of the sky and crashing to the earth. The fact that the movie came out mere weeks after 9|11 made the studio releasing it, Newmarket Films, pull basically all advertising for the film and drop it cold and quiet with no buzz to help it along.

I never saw it in theaters, but when it came to home video it did so with enough word of mouth to make it a must-rent. In time, the appeal of the movie blossomed until it became one of the most talked-about and debated films of my generation. It remains a bizarre movie, full of questions without clear answers, and images that seep into the mind of the viewer both consciously and otherwise. Donnie Darko will never be a movie everyone agrees on, but as far as I’m concerned, it was awesome twenty years ago, and it’s still awesome twenty years later. 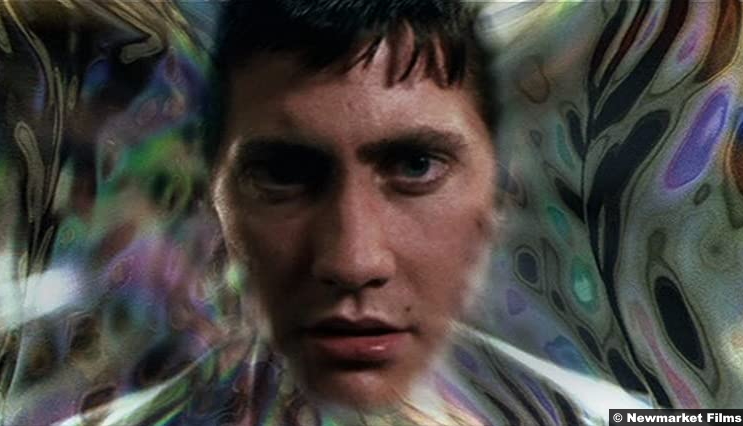