Already we’ve considered the very “era-specific” fun of Shrek, a movie that has aged better than you might think, precisely because it refused to conform to the Disney/Pixar style it was rebelling against. We also looked at the still-cool and slick Oceans 11, a movie whose charm and fun remains as effective today as it was back then, as well as A Knight’s Tale, a movie that’s anachronistic in all the best ways. And so is the Royal Tenenbaums, a movie that took Wes Anderson’s already-honed style and put it in his biggest production yet.

It’s fun to look back over a particularly notable director’s filmography to see what tropes were present from the beginning, what styles didn’t take root, and how his or her overall approach to making a movie evolved (or didn’t). Christopher Nolan has only directed ten movies (including Tenet but not the indie film, Following) but all of them have either been critically or commercially acclaimed (or both; most of them both). His “weakest” films are either criminally underrated (Insomnia) or easily categorized as “flawed, minor masterpieces of filmic construction” (Tenet, The Dark Knight Rises). On the other hand, when a Nolan movie really “clicks” is when a Nolan movie becomes a pop culture phenomenon (The Dark Knight, Inception), or something akin to a cinematic textbook for film students to examine for years to come (Dunkirk). While I believe that The Prestige is the director’s best work, I will always have a soft spot for his first major Hollywood production: Memento. 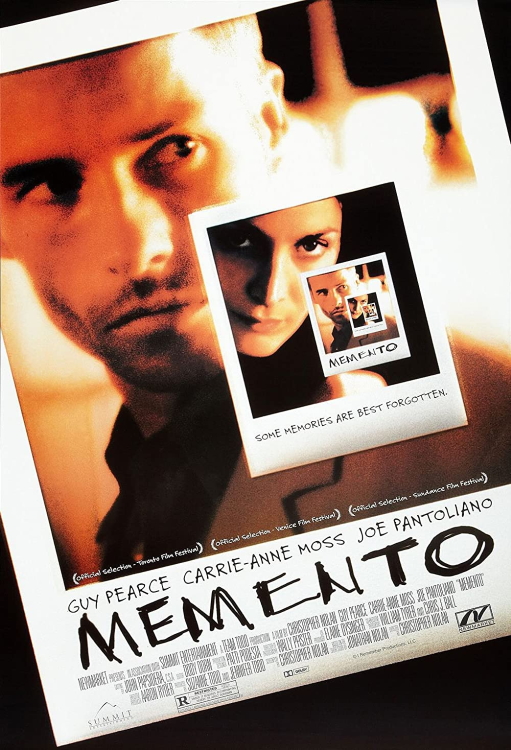 Memento was made and released in the era before Nolan’s name was big enough to be half the marketing of a movie. It was before his take on Batman reinvented the character and the genre of comic book movies. It was before Inception blew everyone’s minds and before Interstellar blew everyone’s eyes and ears. Back in 2001 (when the film released in the USA), Nolan was a small-time director with a very intriguing high-concept script (co-written by his brother). He was given 4.5 million and turned it into a 40 million dollar sleeper hit. The success of Memento prompted Warner Bros to give Nolan a little bigger budget and a little bigger cast (Al Pacino and Robin Williams) and the success of that movie (Insomnia made over 100 million off a 40 million budget) is what gave him the green light to reinvent Batman.

To say Memento is an important movie in his career is an understatement; Memento basically is his debut album with a two-week #1 hit single attached to it: A success, with the promise of much bigger successes to come.

It’s also the first Chris Nolan movie I ever watched, fittingly before Nolan had made any other movies. On a lark, I rented it from Hollywood Video (nostalgia!) thinking it was a slowburn, sort of grounded horror movie. The premise certainly fits that bill:

A man suffering from anterograde amnesia (short-term memory loss; being unable to form new memories) searches for the people who attacked him and killed his wife.

The concept is just bonkers enough to be intriguing and, even if Nolan had made this movie in some kind of a traditional way, the story and the film still would have worked. In fact, many years ago, back when YouTube was a less-monetized, less-copyright enforced wild west playground, I rewatched the entire Memento film re-edited with a traditional chronological layout. And you know what? It worked. It wasn’t as great as the released version, naturally, but the story still worked. 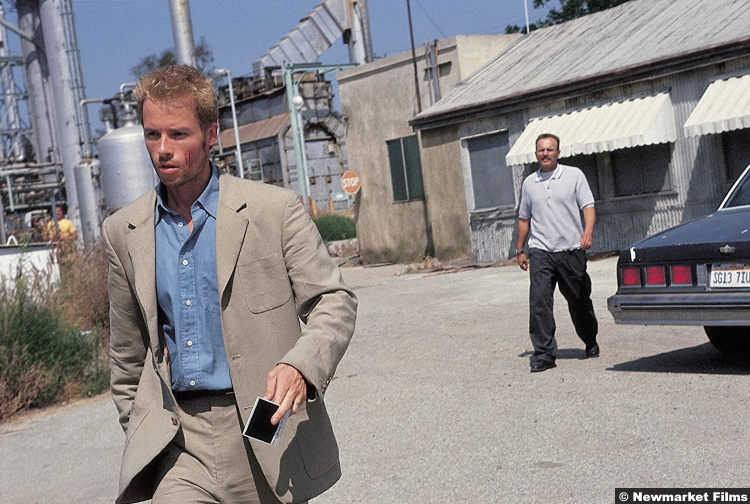 Of course, if you’re not familiar with the movie you may wonder what the released, untraditional, version entails.

Memento is a movie viewed backwards, with the first scene of the movie being the last (or is it the middle) scene, chronologically. After that, the scene ends, the movie backs up 15 minutes and we watch the scene that led up to it. For example, one scene features the protagonist…running. And there’s someone else…also running. We’re confused: Is he chasing this guy or is he being chased? In fact, that’s the exact question the protagonist wonders to himself (just before he gets shot at and realizes he’s being chased). It’s not until the scene ends that we back up to the time period just before it, in order to understand why that guy was chasing him in the first place. Typing it out is a head-spinner, and watching Nolan himself try to explain it can make a person go cross-eyed…

What Nolan doesn’t say, in the video above, is why he chose this particular cinematic style. It wasn’t just a gimmick for gimmick’s sake (like in that one season-eight episode of Seinfeld). It was done purposefully to disorient the audience, to simulate the way the protagonist feels disoriented every fifteen minutes (when his short-term memory loss kicks in and he suddenly has no idea where he is or what is going on).

Of course, now that we’ve had twenty years of Nolan, we can guess that the initial mind-bending idea is just a “crumb coat”; Nolan must add a second layer, and he does in the form of black and white flashbacks. But since the whole movie is slowly being told backward, these aren’t flashbacks so much as they are “intercepting scenes.” As he explains in the video, the movie’s backward structure is persistently interrupted by black and white scenes of the hero in a motel room, explaining the plot to a character on the phone. those scenes are moving forward in time, slowly catching up to the color scenes of the movie that are moving backward in time…but even those black and white scenes have actual flashbacks that take place before any events of the movie. 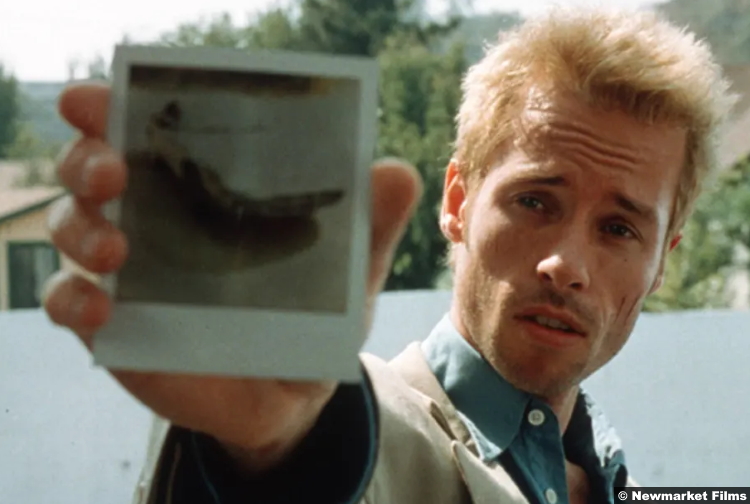 As said, the movie’s a head trip and now—after two decades of Nolan movies featuring time-twisting moments not only subtly (Dark Knight Rises) and narratively (Interstellar), but also constructively in the editing (Dunkirk), as well as his movies having mind-blowing twist endings that completely deconstruct the whole experience (The Prestige, Inception)—we’re used to it. You go into a Nolan movie expecting him to use your senses against you. In 2001 that was a new experience for cinema-goers, and had the movie failed to stick the landing, we could at least applaud him for his efforts and look forward to seeing how he improved in the years to come. And while Nolan did get better and better (and better) in subsequent movies, Memento is no failure. It’s an achievement in taking a simple but intriguing premise, and telling it in the most bonkers and creative way.

Memento remains a film filled with suspense, mystery, dark humor, and shocking surprises and, in whatever direction you watch it—backward as intended or forward just for fun—the movie is still awesome, twenty years later.