Already we’ve considered the very “era-specific” fun of Shrek, a movie that has aged better than you might think, precisely because it refused to conform to the Disney/Pixar style it was rebelling against. We also looked at the still-cool and slick Oceans 11, a movie whose charm and fun remains as effective today as it was back then, as well as A Knight’s Tale, a movie that’s anachronistic in all the best ways. And so is the Royal Tenenbaums, a movie that took Wes Anderson’s already-honed style and put it in his biggest production yet. On the other hand, Memento illustrates a director still honing his time-bending style of filmmaking. Not to be outdone, in June we looked back on one of the most surreal films ever made, David Lynch’s dream-and-“dream” inspired ode to old Hollywood, Mulholland Drive. That was followed up in July with a reminder of how great Gosford Park is, both as a murder mystery, and as a period piece with needed social commentary. In August we looked back on one of 2001’s most bizarre and curious cult hits, Donnie Darko.

And speaking of curious movies… 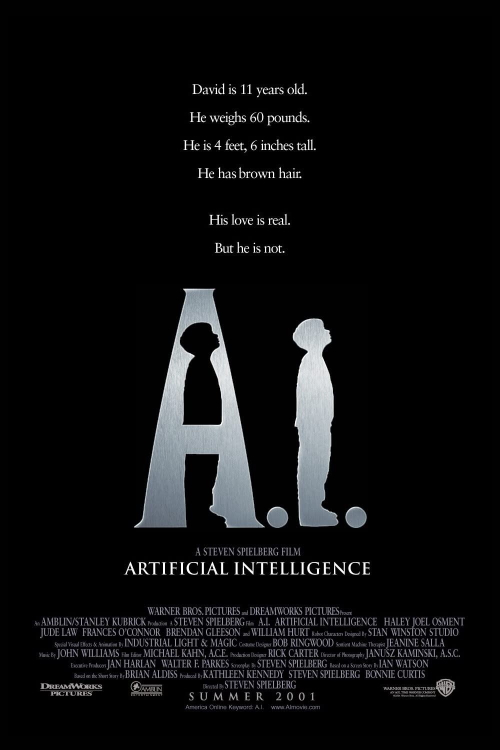 The story behind AI—in its pre-release state with its production headaches, and its post-release with the mixed reaction it received—is almost as interesting as the movie itself. What began as a long-tinkered-with passion project of Stanley Kubrick ended up a film in the hands of Steven Spielberg, one of the most “auteur” directors in Hollywood.

As much as the latter director admired and learned from the former, their styles are as diametrically opposed as any two directors might be. Kubrick is a nihilist. Spielberg is an idealist. Kubrick movies are pessimistic and raw. Spielberg movies are aspirational and whimsical.

I’m speaking in broad terms, of course: There’s nothing whimsical about Schindler’s List, although you can argue it is, in a small sense, aspirational, in that the movie is ultimately about the desire to rescue and save lives. The finest criticism I ever heard of Schindler’s List (a brilliant film) is that Spielberg couldn’t help but give it—a movie about the Holocaust—a kind of “happy ending.” Kubrick would never have done that.

And yet, people are a self-contained myriad of contradictions, are we not? Despite not really even trying to emulate Kubrick’s style, Spielberg regularly credits the director as one of his major influences and, by all accounts, the two directors got along very well while both were alive. Their careers overlapped a little, with the older director releasing The Shining, Full Metal Jacket, and Eyes Wide Shut in 1980, 1987, and 1999. At the same time those movies were being made Spielberg was getting ready to release Raiders of the Lost Ark in 1981, working on Empire of the Sun for a 1987 release, and had just finished work on Saving Private Ryan in 1998.

In the mid-90s, while Spielberg was riding high from the one-two punch of Jurassic Park and Schindler’s List, Kubrick was trying to get a movie off the ground he’d been working on for twenty years. Based on a short story entitled “Supertoys Last All Summer Long,” the story was bleak, tragic, and bitterly ironic…

Imagine a future where population control means you must get approval from the government before you can have children. At the same time, technology has advanced to the point where artificial intelligence and robots are realistic enough to perfectly mimic human life. The central character is a boy named David who begins to wonder if he is real or a machine. In the end, the family is granted permission to have a real child, which reveals the truth about David: He’s just a machine. The final moments depict David about to be sent to the factory he came from, presumably to be disassembled, with the “boy” blissfully unaware of what is to come.

As I said, bleak, tragic, and bitterly ironic.

You can see, perhaps, why a storyteller like Kubrick would be drawn to the project. Had he been able, he would have directed and released the movie in the late-70s or early-80s. Unfortunately, visual effects weren’t where he needed them to be and the director refused to move ahead with the project until he knew how to figure out the principal character at the heart of the story. Eventually, Kubrick decided that David would have to be artificial in some way, believing no human actor could ever convincingly portray the robot boy (or any other robot character for that matter) with the right degree of emotion and character depth.

Jurassic Park was the movie that convinced everyone that digital characters were the future of cinema and were a viable tool to bring previously impossible characters to life.

It’s here where the story is told in different ways.

In some reports, Kubrick gave the project for his sci-fi movie over to Spielberg in 1995, encouraging him to make the movie instead. In other reports, it was Kubrick’s wife, in 1999, after the director died, who asked Spielberg to finish the project on his behalf. It’s possible that both stories are true, that Kubrick asked Spielberg in the mid-90s to make the movie but one thing or another prevented it from happening until, in 1999, the death of the original director motivated everyone to bring the story to life.

However it happened, the movie that Kubrick had been trying to make for twenty years fell to Steven Spielberg to finish, and the two directors’ vastly different approaches to storytelling resulted in one movie that we got, and one that we’ll always wonder about.

I have a hunch, partially based on what has been confirmed in interviews, that Kubrick’s version of the film adaptation of “Supertoys Last All Summer Long,” would have, more or less, faithfully adapted the story. Of course, with Kubrick—who adapted many stories over the years—you’re never going to get an exact adaptation. The director was notorious for picking out a theme or a moment or an idea, something that was mentioned in passing in the source material, and turning it into half the movie. Nevertheless, I think the story was simple enough for Kubrick to take and translate, roughly as is, onto the screen. The only major change he proposed to the story was to add a few scenes that bridge the point where the original short ended (with David off to be destroyed) to the new ending he had conceived for it.

That’s right: The infamous “David wakes up in the distant future and, with the help of very advanced artificial intelligence, spends one perfect day with a recreation of his mother before dying” ending found in the Spielberg movie was not, as initially presumed, a Steven Spielberg idea. It was Kubrick’s, based on interviews given by people in the know. It seems as if Kubrick intended to take the basic premise of the short story, examine the themes of humanity found therein, and then end as Spielberg’s film did. 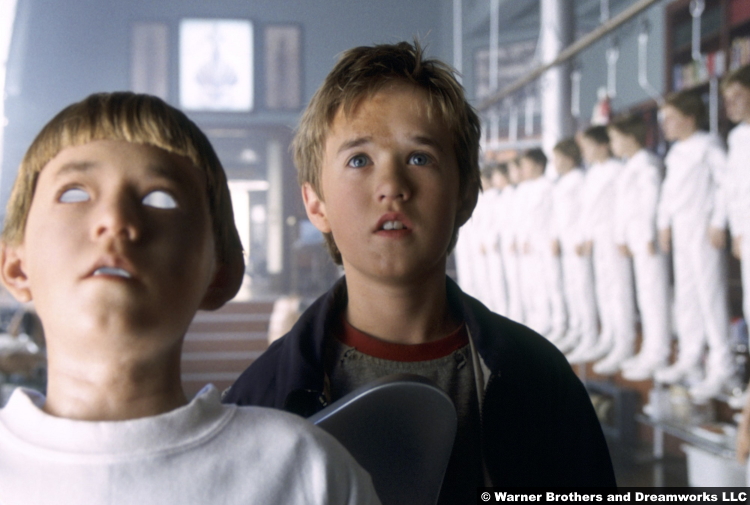 Spielberg obviously took the story in another direction, and the reason why goes back to his starkly different style of filmmaking. Kubrick can take a short story that can be read in fifteen minutes and turn it into eighty minutes of screentime. He can draw out a film with long takes, contemplative moments, and slow-developing sequences. He’s a patient director in that sense, eager to let the performances captivate the audience as opposed to a spectacle or a set piece.

Spielberg, obviously, is not that kind of filmmaker. He’s a spectacle and set piece kinda guy. Even his dramatic movies are paced and edited with that mentality. And though there are moments in Spielberg’s film where you can tell he’s doing some great homages to Kubrick, the end result never feels like more than an imitation of the real thing. 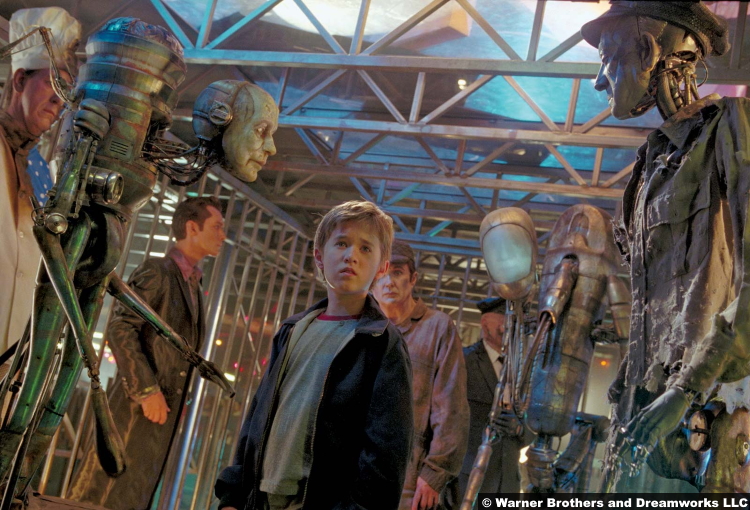 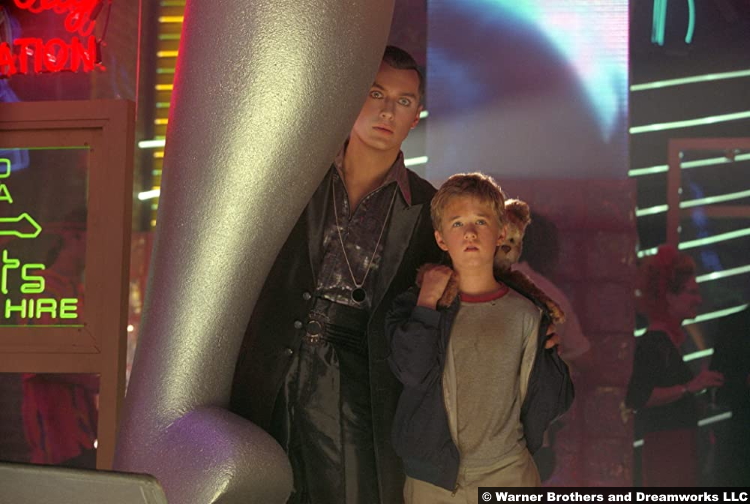 If you want to see Spielberg’s take on the kind of adaptation Kubrick would have done with this story, watch AI’s opening act, then skip to the end of act two, then watch to the end. You basically have to cut out the entire second act, because that’s the part Spielberg invented out of thin air. He had to; his style of filmmaking meant the adaptation of the short story would have been over in half an hour or so. After David is sent away, presumably to be destroyed, what then? Kubrick would have reached that point near the end of the second act. Spielberg still had an entire movie to tell.

So, being the idealist, dreamer, whimsical kind of director he is, he conceived a story akin to Pinocchio and took David on a bizarre journey of self-discovery. Is it what Kubrick would have done? No, but Kubrick never made the movie. Spielberg did, and I won’t fault the man for making the movie his way. And you know what? I love it. I love Kubrick too and I would love to have seen his version of the movie, but the movie we got is one of my most favorite science-fiction films ever. I don’t know how Kubrick would have handled the tragic elements in the story, or the bittersweet ending, but I know Spielberg—who is sometimes unfairly maligned as a director who is too saccharine to do tragedy or bittersweet moments—captured the perfect tone for a story such as this.

The movie we got, AI: Artificial Intelligence, is at times heartbreaking, at times whimsical, at times nihilistic, and at times idealistic. It’s not a Kubrick movie, but it’s also not entirely a Steven Spielberg one, either. It retains enough of the source material, and has enough respect to the very different sort of man who labored over the project for twenty years, to be a curious amalgam of two different approaches to filmmaking. Is it perfect? No. But looking back, it remains a movie I appreciate, and one which, at times, I outright love. The middle of the movie is the messiest part, but the beginning is tragic, and the ending is poignant and melancholic. 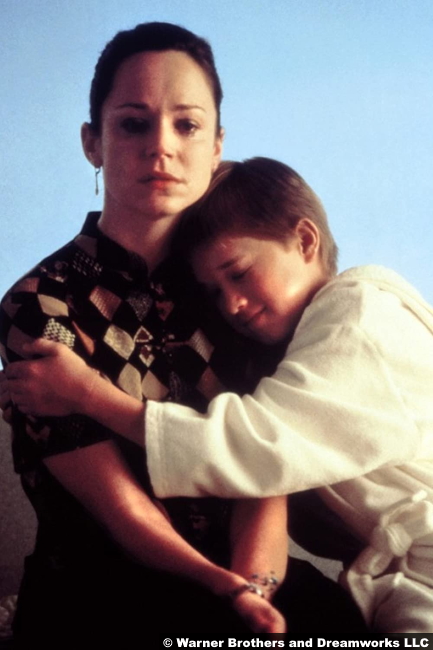 And while it might not be the movie people instantly think of when recalling the great movies of 2001, it’s a movie I look back on with fondness, as it was the movie that opened the gateway for me to appreciate and study the filmography of the director that Spielberg—my favorite director—clearly looked up to. You might not think so, but if you ask me, AI was awesome twenty years ago, and it’s still awesome twenty years later. 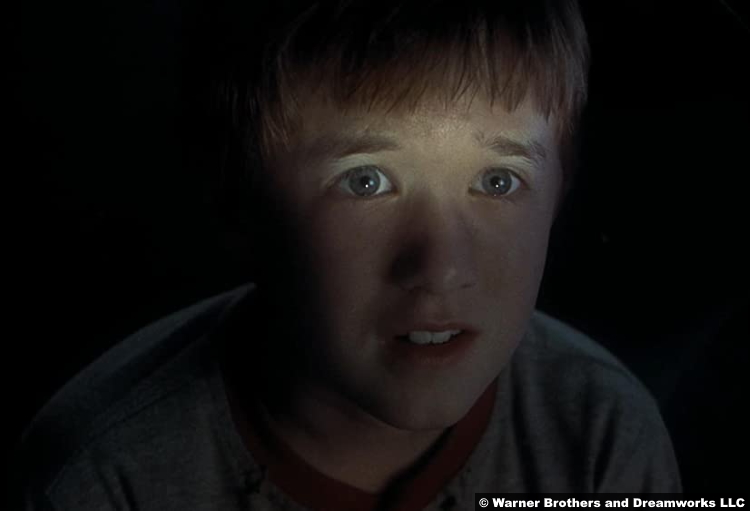