Vikings S05E16: The Buddha – A tale of faith and mothers

The Buddha finds the many different strands of stories that have filled this fifth season pausing for breath in order to find their bearings. After the one-two punch of the calm before and the battle between King Alfred and King Harald’s forces, as well as what’s going on with Floki in Iceland and what’s happening in Kattegat, the world of Vikings has become something of a sprawling mess. Even so, the last two episodes felt like the show was beginning to find a semblance of its mojo again, and The Buddha continues this slight uptick in form while also exposing some of this season’s greatest failures.

The greatest of these failures is the handling of Lagertha. Since the show’s humble beginnings, Lagertha has been a fan favorite, a woman who is more than a match for the her male counterparts in fighting prowess, ruling a kingdom, and growing old with an absence of wrinkles to show for it (I’ll grant you that most of the first generation cast have aged ridiculously well, apart from Rollo). Lagertha makes only a brief appearance in The Buddha, but she casts a shadow over all proceedings. The episode opens with Heahmund dead on the field of battle (can you say hallelujah!) with a clearly traumatized Lagertha looking down at the lifeless corpse of the man she loved. This should play as a huge moment, and the episode certainly wants us to believe that Lagertha has, in Torvi’s words, come to the end of reason, but I personally can’t get invested in this narrative choice because I could never buy into their relationship in the first place. In fact, I believe that Lagertha’s affair with Heahmund amounts to nothing less than a character assassination. 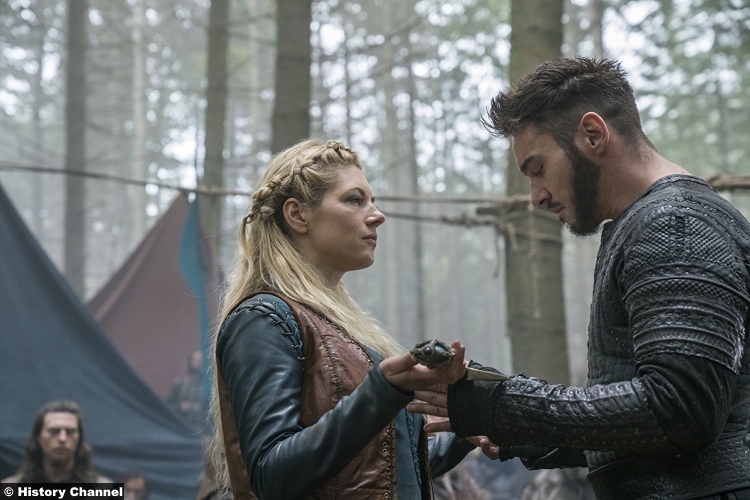 Let’s look back on this relationship now that we have the full picture. It’s true that Vikings has previously elevated certain story choices by implementing an ending to said stories that show a grander design that was hidden up until this point. The first half of season four had Ragnar languishing in a plot where he basically became a drug addict, but it led to the destruction of his legacy, an estrangement from his children, and his eventual death, all of which made the comparative slog of that arc more than worth it. With the full picture, we were able to see Michael Hirst’s meticulous design of how to bring this man, this living legend to his lowest point.

It seems that Hirst wants us to believe that this is Lagertha’s lowest point. This is something I can believe considering she had recently lost her kingdom, killed her former lover who betrayed her, had Rollo dropping the bombshell that he might be Bjorn’s father, and her having to flee to Wessex so Ivar couldn’t kill her. All of this is fine, but the relationship between Lagertha and Heahmund, in which his death is the final straw, hasn’t been earned.

This is mainly due to the fact that Heahmund was clearly more important to Hirst, meaning the best female character in the entire show, who is also first-billed in the credits, is relegated to this idiot’s girlfriend. Poor show, Michael. It doesn’t help that this relationship has been completely rushed because Hirst can’t be bothered to show why these two love each other, outwith both of them being extremely attractive. This problem reaches further than Lagertha, which brings us to Bjorn. I think it’s the right choice for Bjorn and Harald to take on Ivar, and I like the pairing of Bjorn and Gunnhild, but these decisions seem to come out of nowhere, something that isn’t helped by Bjorn feeling fairly rudderless with the only progression being which new woman wants to sleep with him. 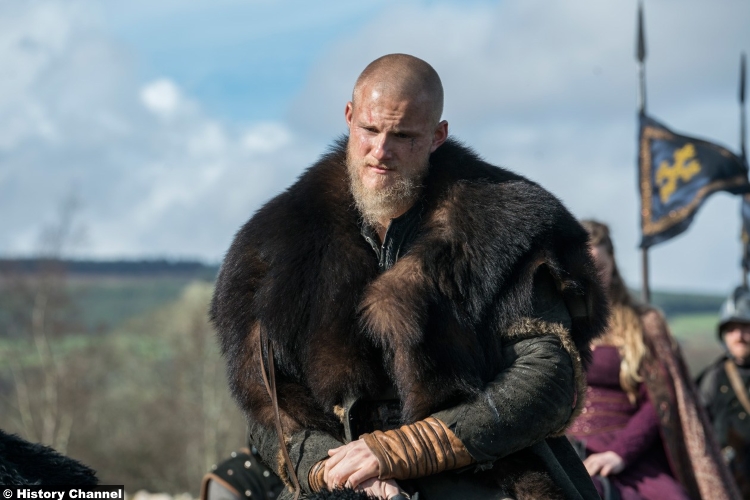 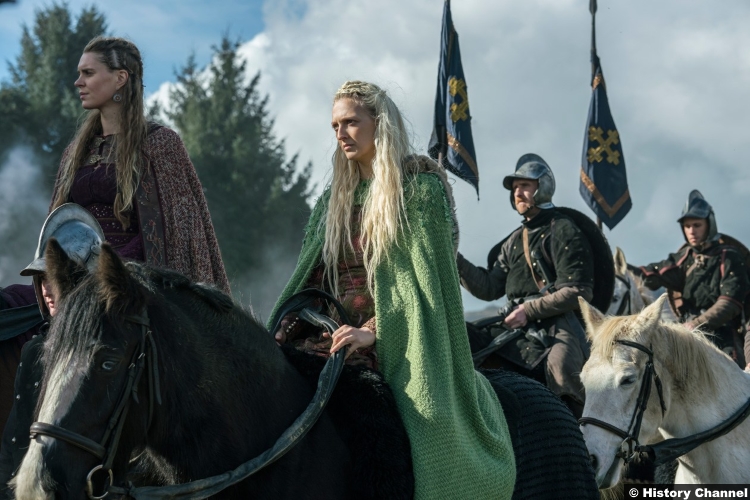 Even with these complaints, complaints that are systemic rather than present just in this episode, there is still a lot going on in The Buddha that is intriguing. Surprisingly, the eponymous Buddha story-line featuring Hvitserk struck a chord with me. It’s perfectly natural for the least of Ragnar’s sons (While Magnus is illegitimate, he has still made a bigger impression in less time) to not only question his decisions but to also question his faith. I would be questioning my faith if my brother was making such a mockery of it by not only thinking he’s a god, but that the gods don’t seem to be punishing him for it. Plus, the scene between Hvitserk and Ivar was genuinely hilarious, mainly because Ivar wasn’t as pantomime villain as usual. 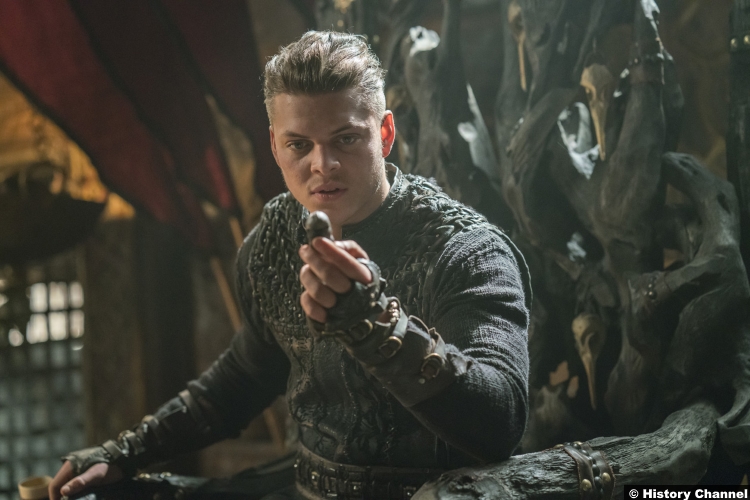 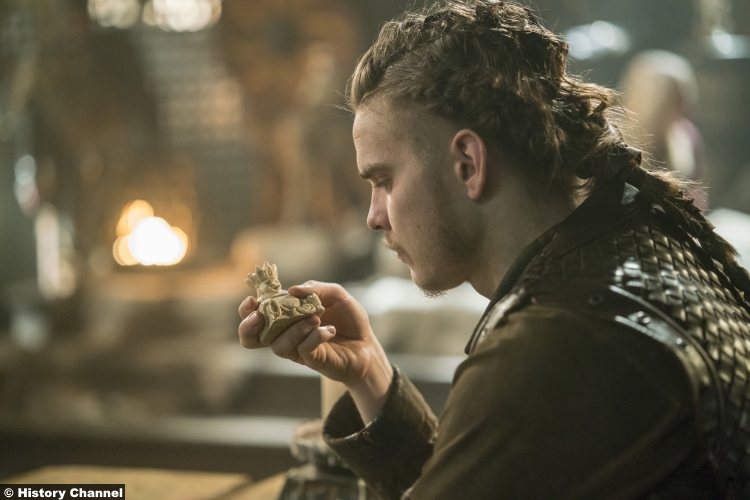 Finally, we have the biggest moment of The Buddha, a moment that is both brilliant while also highlighting another of the show’s systemic problems. I’ve said that Michael Hirst cares far too much about what’s going on in England at the expense of the actual stars of the show, the Vikings. I still feel that way, but it was still extremely satisfying to see Judith kill Aethelred in service of protecting Alfred. My fondness for this particular moment has nothing to do with these two characters, though it is fun to watch Judith go slowly mad, I’m thrilled that another terrible and boring character has been offed for the second week in a row. Since this nonsense is now over with it will be interesting to see how Alfred takes this new twist once he’s regained consciousness.

6/10 – While I’ve spent most of this review taking the show to task on its bigger problems, The Buddha was an entertaining episode that sows the seeds for better things to come in the future.