Vikings S05E05: The Prisoner – An exciting episode brings the season a much-needed focus

Season five of Vikings feels like a spin-off of the original show. With Star Wars Episode VIII The Last Jedi being at the forefront of the cultural conversation, and all I’ve been thinking about for the past week, it’s remarkably easy to view Vikings with a Star Wars filter. Like the new Star Wars films, Vikings is enamoured with the new generation, with the exploits of the older generation falling into myths and legends, and the main female character in a position of power that could be taken away at any moment: Lagertha=Leia. Don’t worry, I’m not going to bog down this review with a faux-scholarly conversation of Star Wars character archetypes and how they turn up everywhere, that would only interest me. The reason I bring up The Last Jedi is that this type of story-telling, and world-expansion, is becoming increasingly prevalent, though maybe not popular.

The death of Ragnar, I’ll never be finished with how this effects the show, is such a bold, brave move on Vikings part, as was his gradual disintegration from folk hero to pariah. The reason the show is still going, after his death, is to examine the consequences of his failures rather than his achievements. If Ragnar succeeded in everything he set out to do there would be colonies of his people in both Wessex and France. He wouldn’t have left his children to grow up into flawed and complex characters, except for Hvitsek but I’m still waiting, who are defined by his absence. This is how Vikings differs from something like Game of Thrones, out with the obvious historical conceit. As much as Game of Thrones is a subversion of fantasy tropes, it’s the story of one period in that universes history. The novels are called A Song of Ice and Fire because that’s how Jon and Dany’s exploits will be remembered. Whoever ends up on the Iron Throne at the end of the show will finish as ruler. We will never see what kind of ruler they become, whether they make fatal mistakes like the Mad King, or just aren’t fit like Robert. Vikings was about the rise and fall of Ragnar, but it’s ambitious enough to follow through with exactly what that means.

The Prisoner felt like a familiar episode of Vikings because of this. Not familiar in a boring, “we’ve run out of ideas way”, but providing a new context with new characters in the same old positions. The Battle of York is a perfect example. Both sides are led by the sons of Ragnar and Eggbert, sons that had a complicated, and sometimes abusive relationship with their fathers. Aethelwulf and Ivar are fighting a battle that their fathers set in motion decades ago. They both have motivations to win that stand apart from typical glory and conquest. Ivar wants to be powerful, but he is Floki’s ward as well as Ragnar’s son. No one hated the Christians more than Floki, ask Athelstan if you don’t believe me, and that influence in Ivar is always present. Aethelwulf has good reason to hate the Vikings. They were indirectly responsible for the worst humiliations of his life. They brought the Monk who shagged his wife, that same monk was treated like more of a son by Eggbert than he was, and he is consistently outwitted by the Vikings in battle. That’s not even mentioning Alfred. 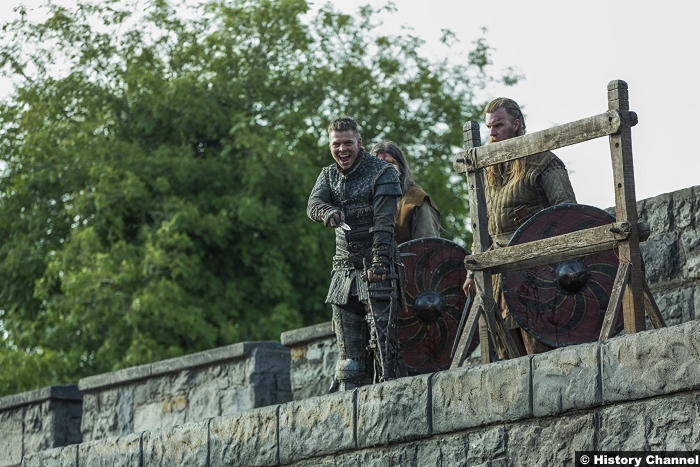 It goes deeper with Heahmund’s capture. While it’s a different situation to Ragnar and Athelstan, the aim is similar. Ivar wants to gloat, sure: he’s captured the warrior Bishop, but he also wants to expand Heahmund’s knowledge. I’m sad that the Battle of York is over, it provided some intense action, and Alex Hoch’s best acting, but Aethelwulf was starting to look like Wiley Coyote to Ivar’s Roadrunner. It’s end also brings a new sense of focus that was sorely lacking last week. While I’m delighted that Harald wasn’t in this episode (it gets a full point just for that) Ivar’s plans for an alliance with him against Lagertha and Ubbe are an intriguing development.

Ragnar’s presence is felt throughout the episode as characters continue to repeat his mistakes. Lagertha give Floki, and his obvious madness, far too much wiggle room with he is utilising gleefully. Floki feels like a wild card, and I’m not sure how successful combining his plot with Kattegat will be, but the problems are really piling up for Lagertha. My only complaint about The Prisoner is Lagertha. Of all of the really important characters in the show, Lagertha is getting the worst treatment. She needs a show of force if she wants to keep what is hers by conquest, but she has enemies coming from all sides. 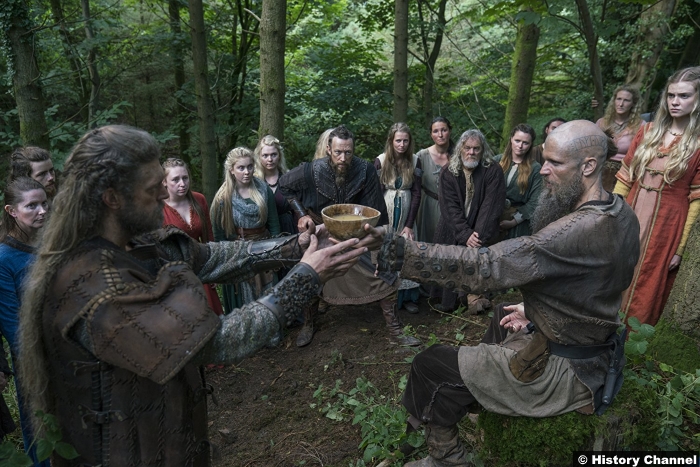 As does Bjorn who repeats Ragnar’s classic mistake of curiosity. While he has travelled further than his father ever has, his thirst for knowledge and experience has got him embroiled in local politics. Like Ragnar fighting for Kwenthrith, Bjorn and Halfdan have bitten off more than they can chew, in this case literally.

8/10 – It’s this repetition, the cyclical nature of history repeating itself, and the consequences that trickle down through the generations that make Vikings one of the most ambitious shows on TV. Not everything works, but the focus on how failure can shape a narrative is a great direction for this show to go.