Poltergeist opens with the Star Spangled Banner. Without any context, it’s an odd beginning for a horror film. That said, there’s a lot about Poltergeist that is odd, bizarre or otherwise noteworthy. So much of the movie, on the inside and out, seems hard to fathom. And yet, the end result is arguably the best “non-R” horror movie ever made. You can surely find movies with more frights or more thrills or more violence, but they’re all rated R. A rare bird may come along with just the right balance and pull off a PG-13 rating, but Poltergeist came out before such a rating existed. 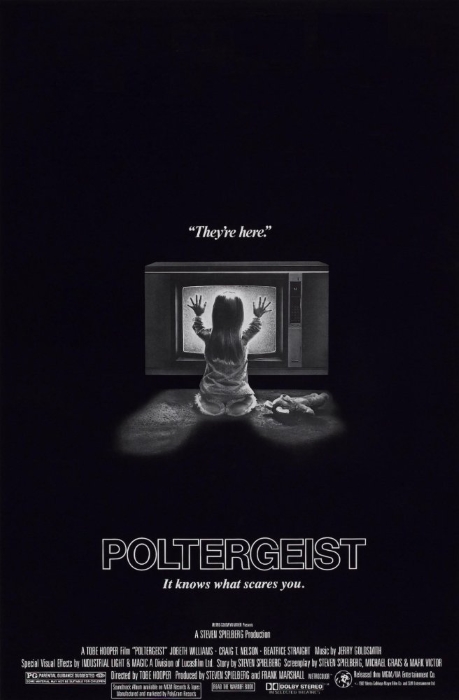 The first cut of the film resulted in the dreaded X rating. A few choice edits later and they worked it down to an R, but that still was a no-go. R-rated movies, much moreso than today, were pretty much guaranteed to have a smaller box office haul. The Exorcist held the R-rated box office record, with a little over 200mm, from 1973 until this year when it was supplanted by…well, IT. The Exorcist was the exception; other than that, the average box office take of a successful R-rated movie was around 100mm, and few were ever successful back then. Poltergeist would never have pulled in even half that. It took some really clever editing to bring it down to a PG rating, but watching it today it’s remarkable they were able to swing it. This movie can get really spooky and I can’t imagine a couple twelve-year-olds watching it alone without coming away with plenty of nightmare fuel in their system.

The movie begins with an on-screen announcement that this is a “Steven Spielberg Production.” In fact this is the only movie to have such a distinction. Amblin Studios had just formed, and with it Spielberg would executive produce a litany of superhits for the next twenty-five years. But on this film, he’s just a producer, although—and this is another oddity—it’s a poorly-kept secret in Hollywood that he basically ghost-directed the movie too.

Originally Spielberg intended to direct the film himself, and had interviewed Tobe Hooper to direct his other big 1982 movie, E.T. Imagine a world in which Spielberg directed this one and…literally anyone other than Spielberg directed E.T. It’s crazy even to imagine. In the end, Spielberg decided Hooper’s background (he was the director of The Texas Chainsaw Massacre) was better served for the horror film so Spielberg did E.T. and Hooper did Poltergeist. The two movies were filmed back to back and if you ask anyone involved, Spielberg was on-set almost every day, making all the standard directorial decisions, working with the actors and crewmen, etc.

There’s nothing in the Director’s Guild that would have denied Spielberg from just officially making the movie himself, but there was a threat of a director’s strike looming and Spielberg didn’t want to get tied down in it and risk both of his movies being stalled. Being a producer meant he could have continued work on the film had the strike occurred. It never did, however, and even though the DGA saw no reason to credit Spielberg with even a co-director claim, it’s obvious just by watching the movie whose movie it is. The very first credit you see, after the movie ends, where usually “directed by ______” is listed, is that of Steven Spielberg and his “producer” credit. Hooper isn’t even in the closing credits at all!

The movie bears all the hallmarks of a Spielberg film, too. The creepy prologue, where we get our first taste at the demon in the TV and its connection to Carol Anne, evoked a lot of the same feelings as the abduction scene in Close Encounters. And the scene near the end, when that freaking clown suddenly attacks Robbie, was just as terrifying as that freaking severed head scene in Jaws. There’s also the queen mother of Dolly Zooms near the beginning of the end that is better than even the great one used in Jaws, and there’s just enough “cute Spielberg” peppered throughout to give it away who the real filmmaker here was.

Back to the National Anthem. Its usage here is a great way to play with your expectations. It instinctively conjures up feelings that have nothing to do with horror or with being unsettled. It’s almost like a forced-relaxation pill. If anything, hearing it makes you feel brave, not afraid. That they were used back in the day as a station sign-off (in the era before there was something on TV twenty-four hours a day) gives the story the perfect opportunity to play with your emotions.

You hear the anthem, everything feels safe, and then…there’s an eerie silence, except it’s not a silence, it’s the monotonous sound of white noise coming from the television. Carol Anne approaches it and begins conversing with it, answering questions and giggling as though she’s having a perfectly normal conversation with a perfectly normal child. Unlike most horror films that would have isolated her from the rest of the family, Poltergeist keeps them all together. The whole family gathers around her, curious about who she’s talking to and why. The next day you get the usual haunted house tropes of chairs moving around, spoons bending and so forth, but it’s not long before the movie remembers to find the “horror.” A gnarly looking tree attacks Robbie, as a headfake to allow the real target—Carol Anne—to be taken to the unseen realm of the dead. That brings in the paranormal helpers who eventually help mother and father rescue their little girl. 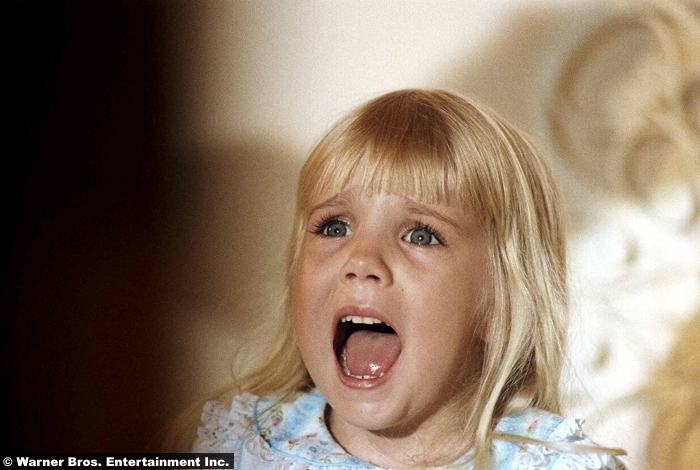 And that’s when the movie should end…except, bizarrely, it doesn’t. A whole twenty minutes more are still to come, as the whole family comes under attack by an army of ghosts. It’s a shocking finale because the movie does such a good job wrapping up the loose ends and bringing you to a satisfying conclusion before that. Like the Star Spangled opening, you let your guard down and relax just long enough to have the movie slap you across the face with horror.

Poltergeist was, of course, remade recently. To the surprise of no one it was a bad movie and no one watched it. I can’t help but wonder if people are saying no to unnecessary remakes or they’re just saying no to bad ones. The 2015 remake was a terrible movie and no one saw it. Would they have seen it had it been good, even though it was a remake? People went to see IT didn’t they? I know that’s a remake of a TV movie but it’s still a “remake” of a well-known property that had an iconic performance many said couldn’t be bested. 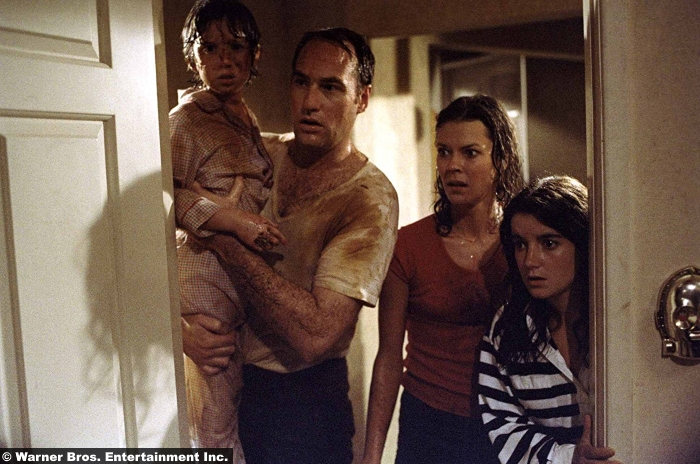 There are no iconic performances in Poltergeist (1982). It was a success based on the sum of its parts. Remaking it was unnecessary; remaking it poorly (with hammy acting, an almost copy-and-paste story, and too many cliches to count) was just asking for failure. The Poltergeist remake failed because it was a generic, bland and bad horror movie whenever it tried to be original, and was still bland and bad whenever it tried to translate parts of the original to the modern era.

The first movie worked, despite its slow pace, because it established mood, developed its characters, and then, when all the pieces were set, went bananas in the final stretch. Despite the remake’s PG-13 rating it was less scary and disturbing than the PG film it sought to emulate. How that mirror scene where Marty peels the skin off his face made it into the final cut I have no idea, but it’s crazier than anything in the remake. 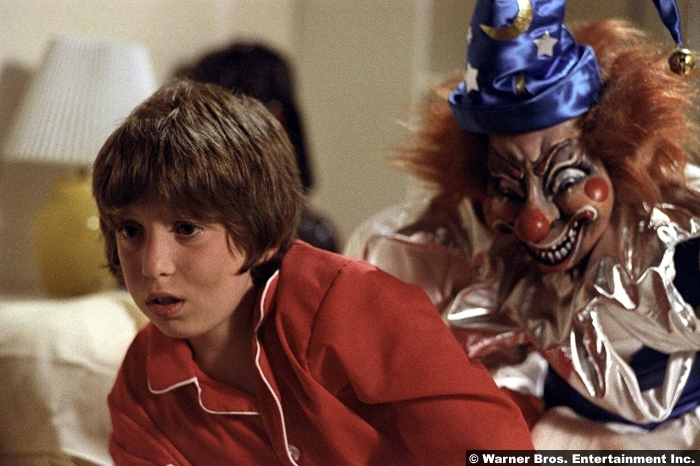 The fact that it’s as effective as it is with just a PG rating is amazing, and today the movie is still amazing…